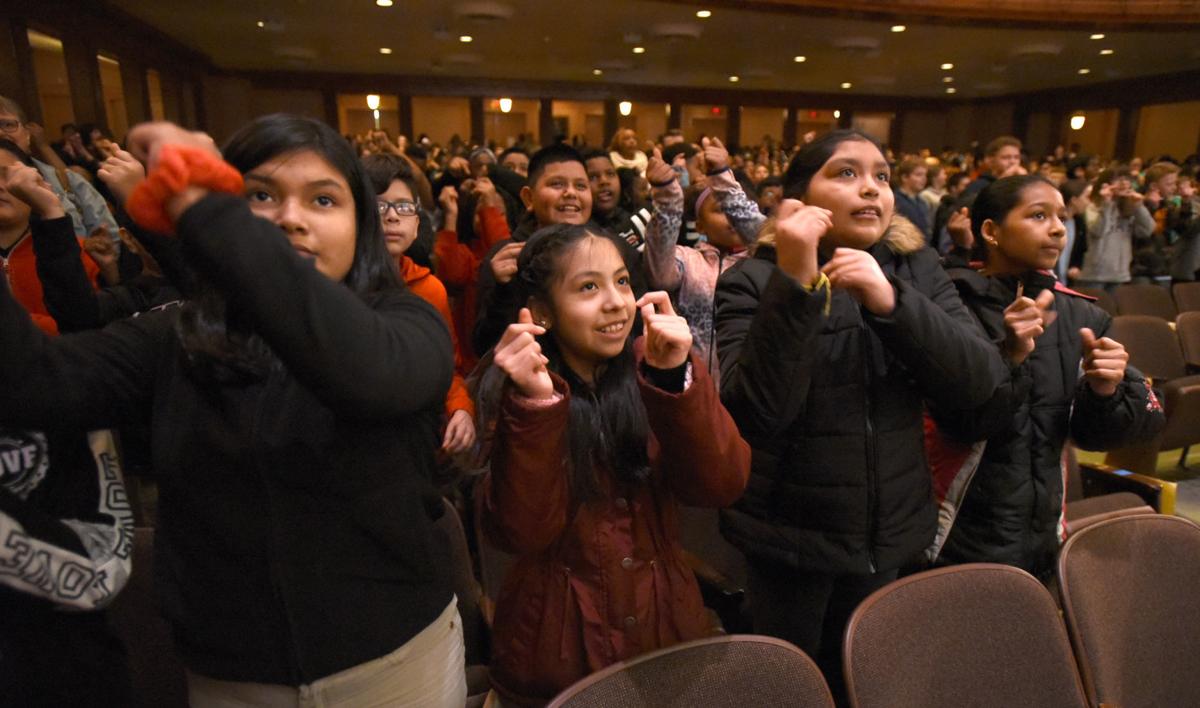 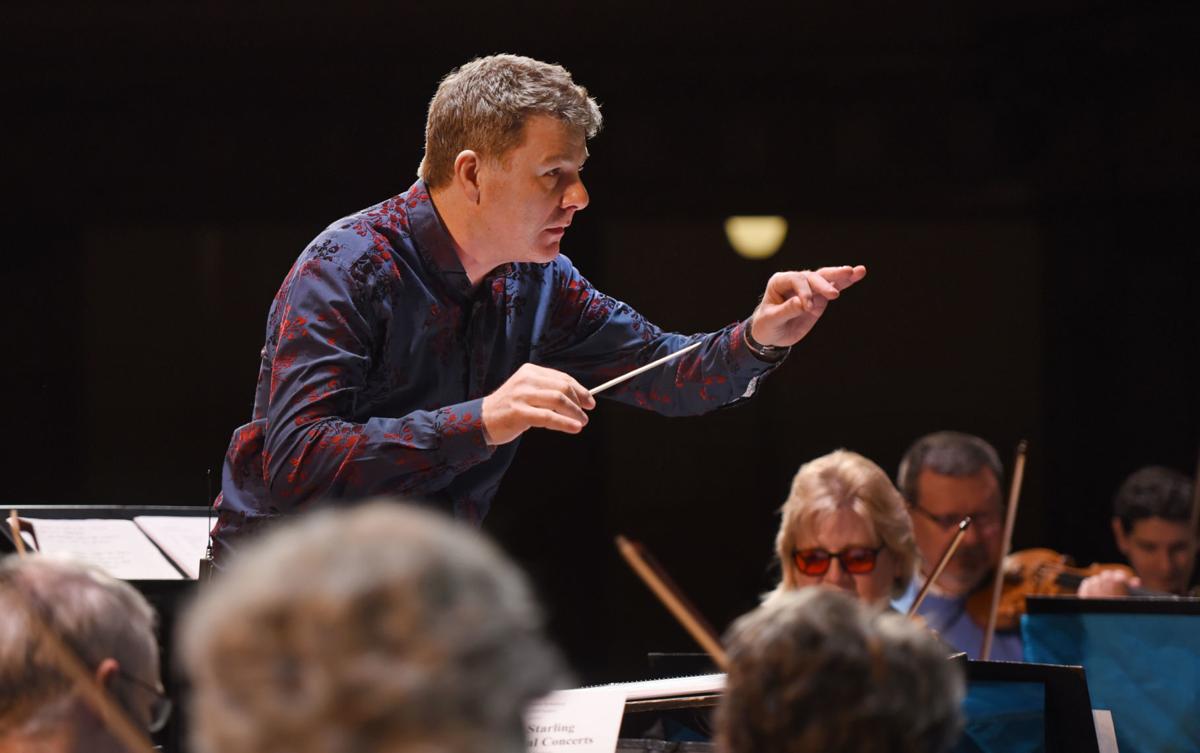 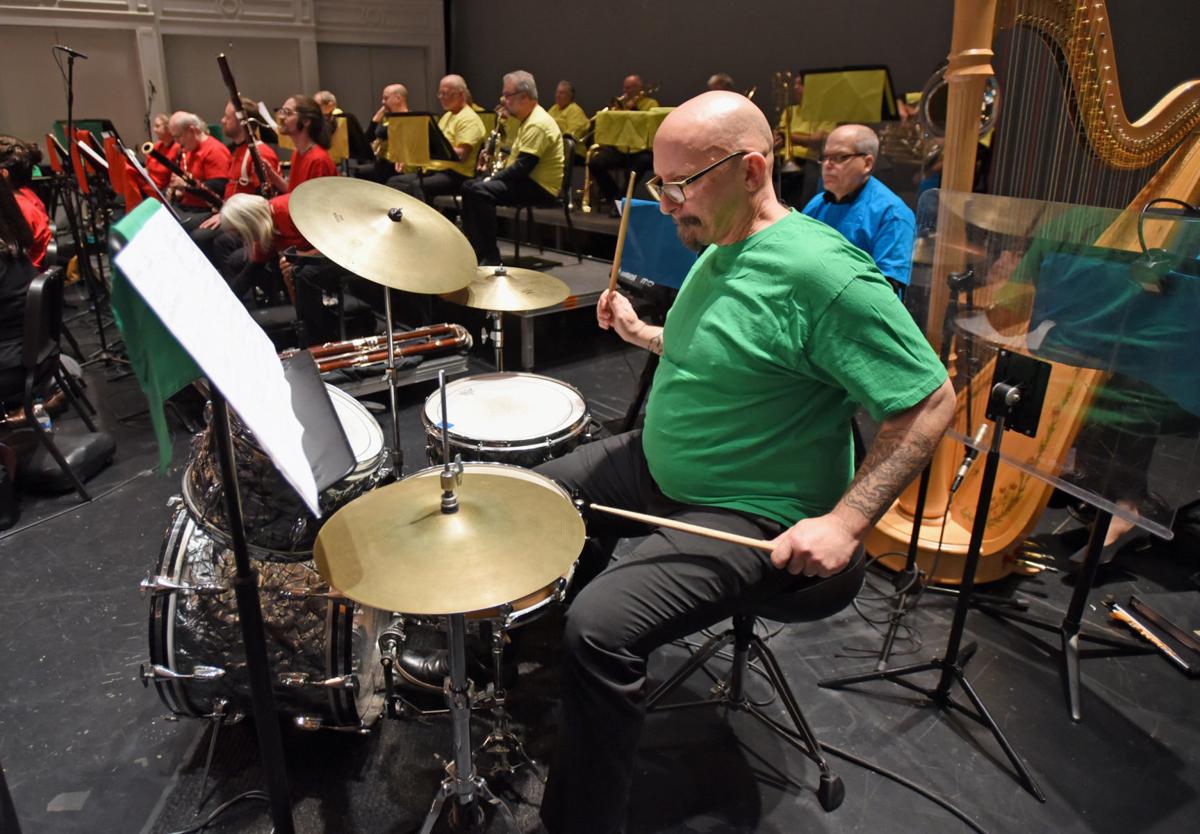 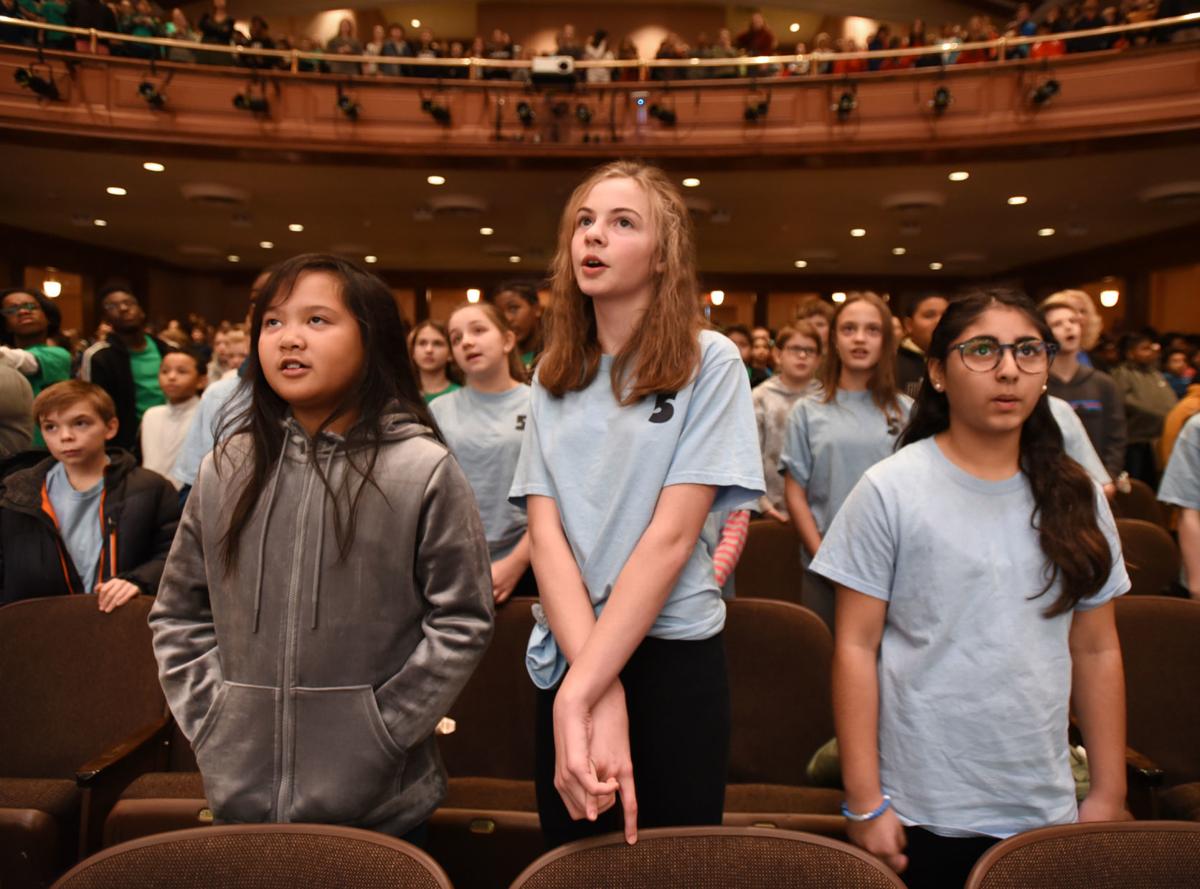 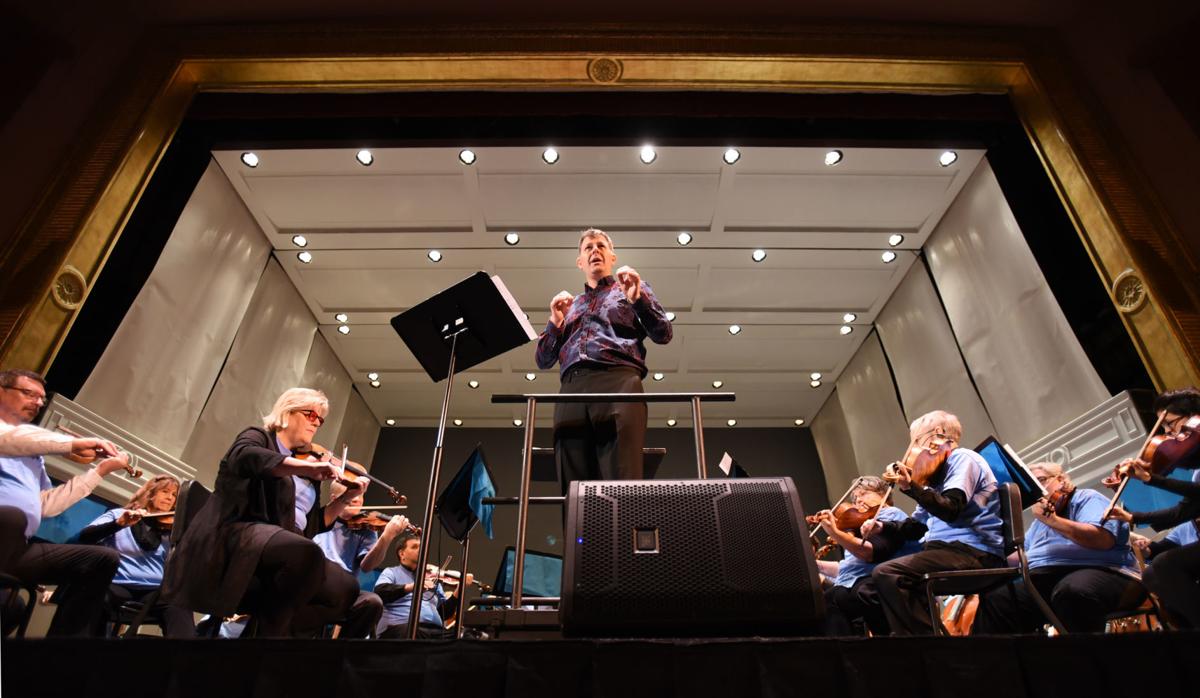 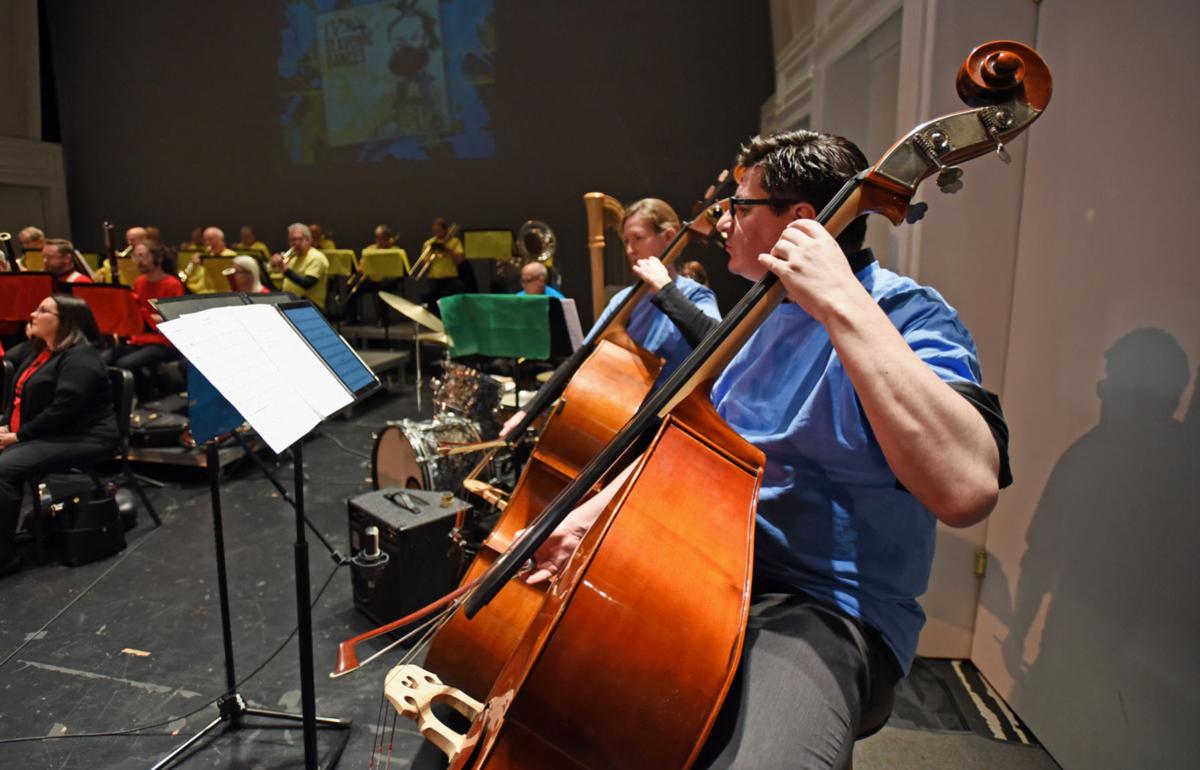 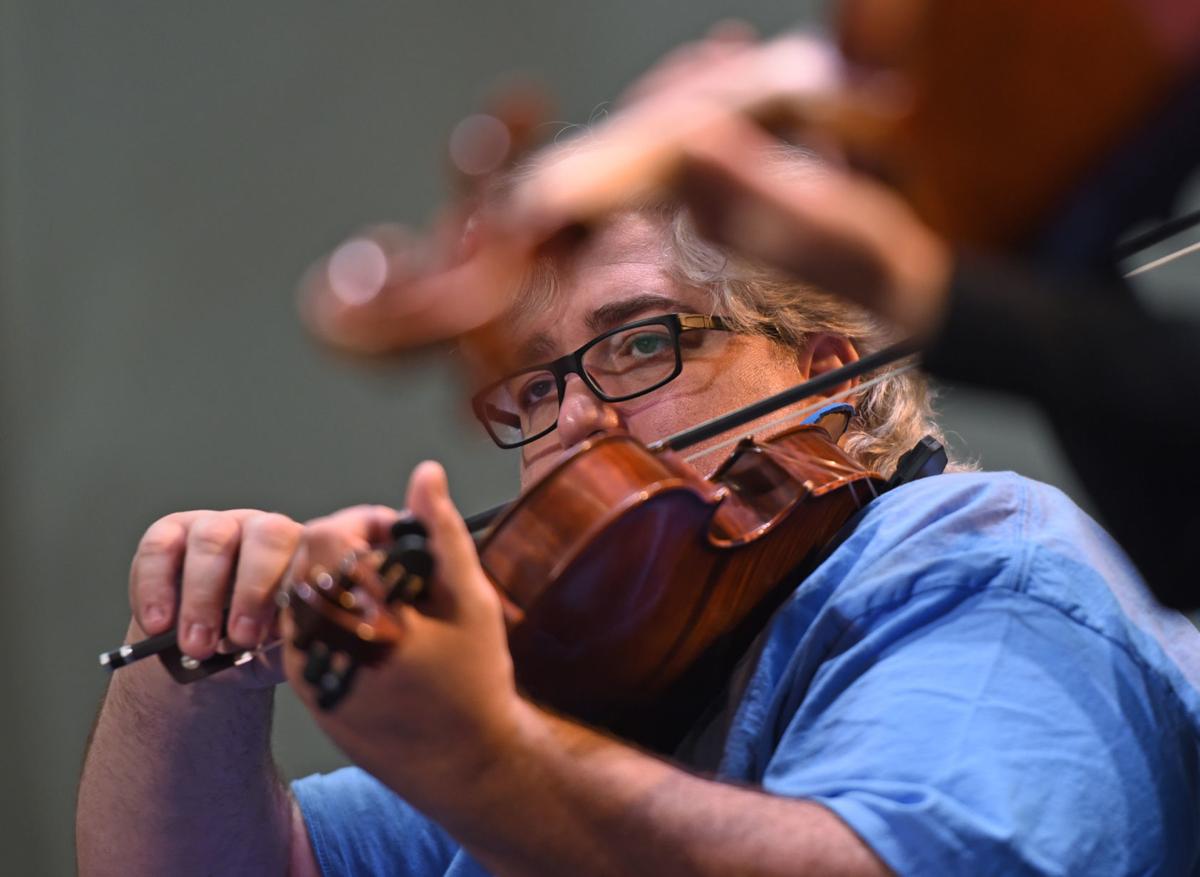 “It’s energetic, exciting and it gets pretty loud,” Timothy Redmond, the symphony’s music director, told them about the piece.

“Exactly. ... The orchestra tuned up,” Redmond said. “That’s very important so that we are all on the same pitch.”

Other pieces performed by the symphony included Stravinsky’s “Dance of The Adolescents” from “The Rite of Spring”; Holst’s “Mars, the Bringer of War” from “The Planets”; and Ellington’s “It Don’t Mean a Thing.”

Each year, symphony woodwind, brass, string and percussion ensembles made up of Winston-Salem Symphony members visit and perform for all fourth- and fifth-graders, giving them a close-up view of the instruments and how they work. Each elementary school in the district gets a visit from two ensembles a year.

“It really targets the fourth-graders,” said Mark Pilson, the K-5 music administrator for WS/FCS and a part-time music teacher for Meadowlark Elementary School. “By the time those fourth-graders are fifth-graders, they will have seen all four ensembles separately in their school.”

The culmination of those school visits is a full symphony performance at a formal concert hall for all WS/FCS fifth-grade students.

The concert had three interactive pieces — movement (dancing), singing and recorders, in which students had the opportunity to play recorders along with the orchestra.

Pilson said that prior to the concert, music teachers prepared the students, helping them learn songs they would sing and dance to; as well as teaching them about notes, quarter notes, the staff and how to play music from the staff, for example.

“It helps with our goal for music literacy,” Pilson said.

This year, more than 4,000 fifth-graders from 43 WS/FCS elementary schools will attend a Mary Starling Program Concert over two days at Reynolds Auditorium.

“The Mary Starling Program is an important part of the Winston-Salem Symphony’s educational programs and outreach,” said Rachel Watson, senior director of education, engagement and inclusion for the symphony. “Studies have shown the importance of music in enhancing education and learning. For more than 55 years, this powerful program has brought live music to our school children and introduced them to the wonder and joy of classical instruments and music.”

Carnegie Hall’s Weill Music Institute, or WMI, chose the Winston-Salem Symphony to participate in WMI’s Link Up program during the 2016-2017 season. Since then, the symphony has incorporated Link Up into the Mary Starling Program each year.

Link Up is a participatory program that pairs orchestras across the country with schools in their local communities, inviting students to learn about the orchestral repertoire through a yearlong, hands-on music curriculum. Each year, the focus is on specific concepts, including rhythm, melody, tempo, orchestration, and composition.

Using materials provided free by WMI, teachers guide students in exploring music through a composer’s lens, with students participating in active music making in the classroom; performing repertoire on recorder, violin, voice, or body percussion; and taking part in creative work such as composing their own pieces inspired by the orchestral music they have studied.

Interactive, cool and up close

Janice Ward, a full-time music teacher at Meadowlark Elementary, likes that the program is interactive.

“I think it makes the interest of the students higher,” Ward said.

Her preparation for the concert included teaching students to play recorders and the words to Beethoven’s “Ode to Joy”, along with information about Beethoven’s life.

“We’ve been working on it for several weeks,” Ward said.

Three 10-year-old students from Meadowlark Elementary — Haniya Hussain, Cheyenne Netter and James Clinger — talked about their experiences at the concert.

“I think it was really good,” Haniya said. “I liked how we could sing and dance and play along with the songs, and it was, like, really energetic.”

Her favorite part of the concert was playing a recorder.

Cheyenne, who enjoys singing and a variety of musical genres, said she liked when the symphony played Norman’s “James Bond Theme” for the finale.

“And I liked the dancing and stuff,” said Cheyenne.

James, who has been playing the piano since second grade, said he enjoyed how all the different instruments in the symphony blended.

“It sounded really nice,” he said.

He also spoke of the fun he had being a part of the concert and playing a recorder with the symphony.

“It was also really cool how we learned a lot of cool stuff,” said James, who wants to sign up for percussion in a marching band when he goes to middle school. “We learned about rock and swing (music).”

Some students from Easton Elementary School got a surprise when they saw their principal, Colin Tribby, on stage.

Tribby, a symphony musician, played a variety of percussion instruments during the concert, including an anvil, snare drum, drum set, gong and cymbals.

“My kids were there this morning, and it was really amazing to see them,” Tribby said.

“That’s why I say “yes” whenever my schedule will allow for me to be able to come and play for them when they are there.”

He said it’s nice to have his students see him in a different role.

Brad Oliver, the director of Arts Education for WS/FCS, said the concerts and programs are important for students.

“A lot of kids have never seen a live, full symphony before,” Oliver said.

He also said that students get up-close interaction with musical instruments, especially when the ensembles come to their schools.

“They see it on TV and hear it on the radio and things of that nature, but to see actually live musicians in their school and playing these instruments and talking about them, I think that makes a lot of difference to a child, to think about what they might want to take in sixth grade. ... They can learn how to be musicians themselves,” Oliver said.

He said that the district’s goal is for every fifth-grader to learn how to read music before they leave elementary school.

“It helps them with mathematical skills,” he said. “It helps with all kinds of skills.”