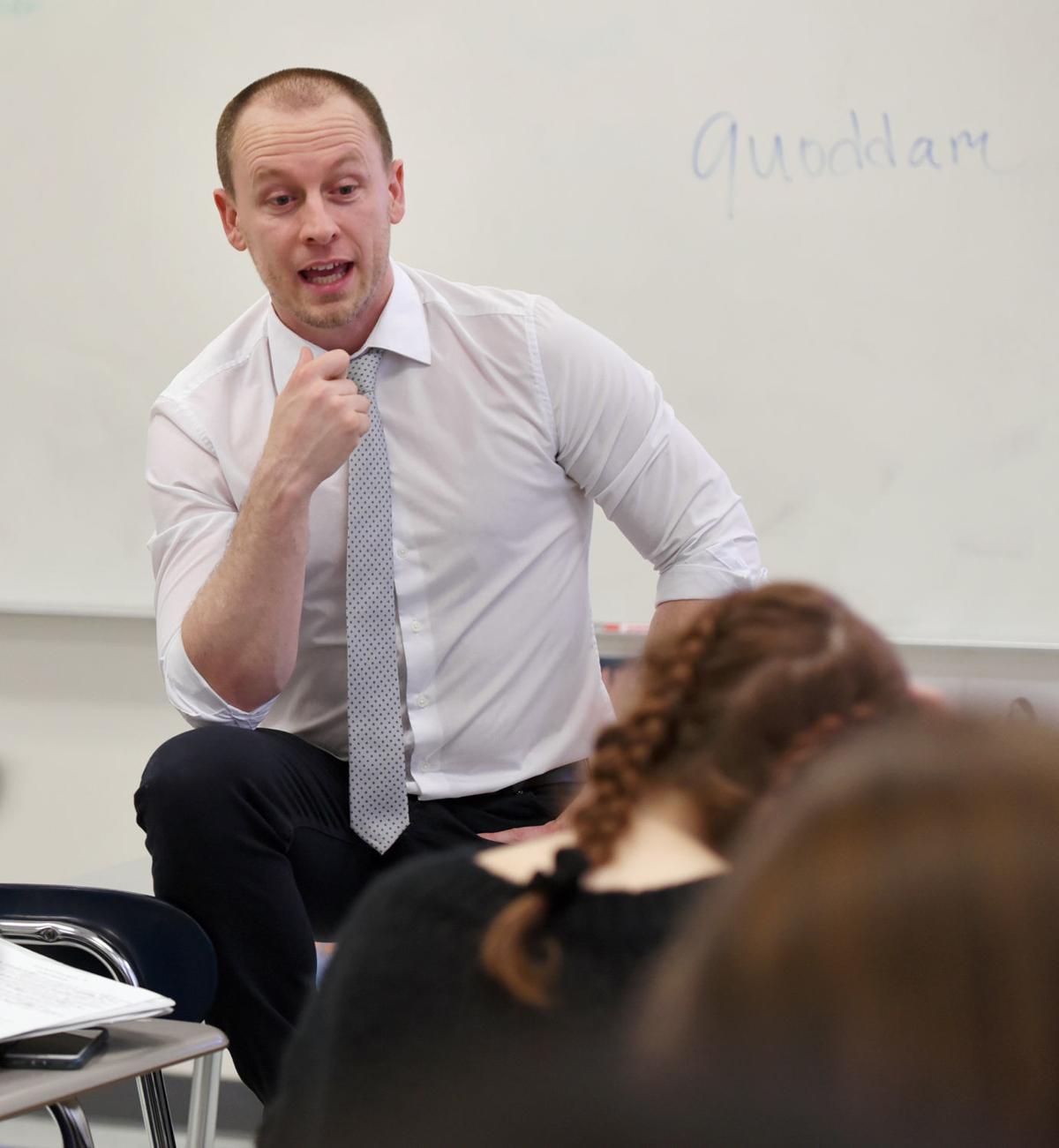 Latin teacher Jessie Craft of Reagan High School works with students in his Latin IV and V class on translating the letters of Cicero. 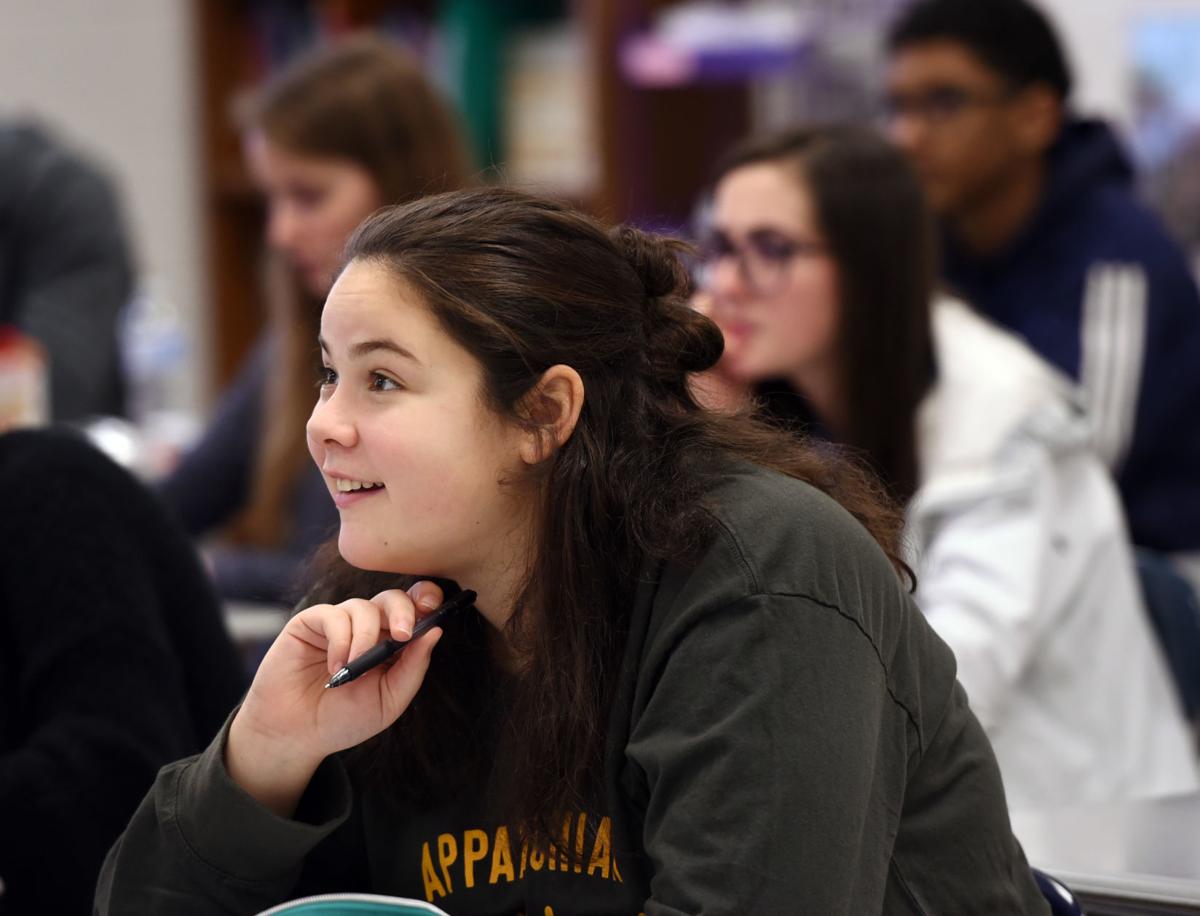 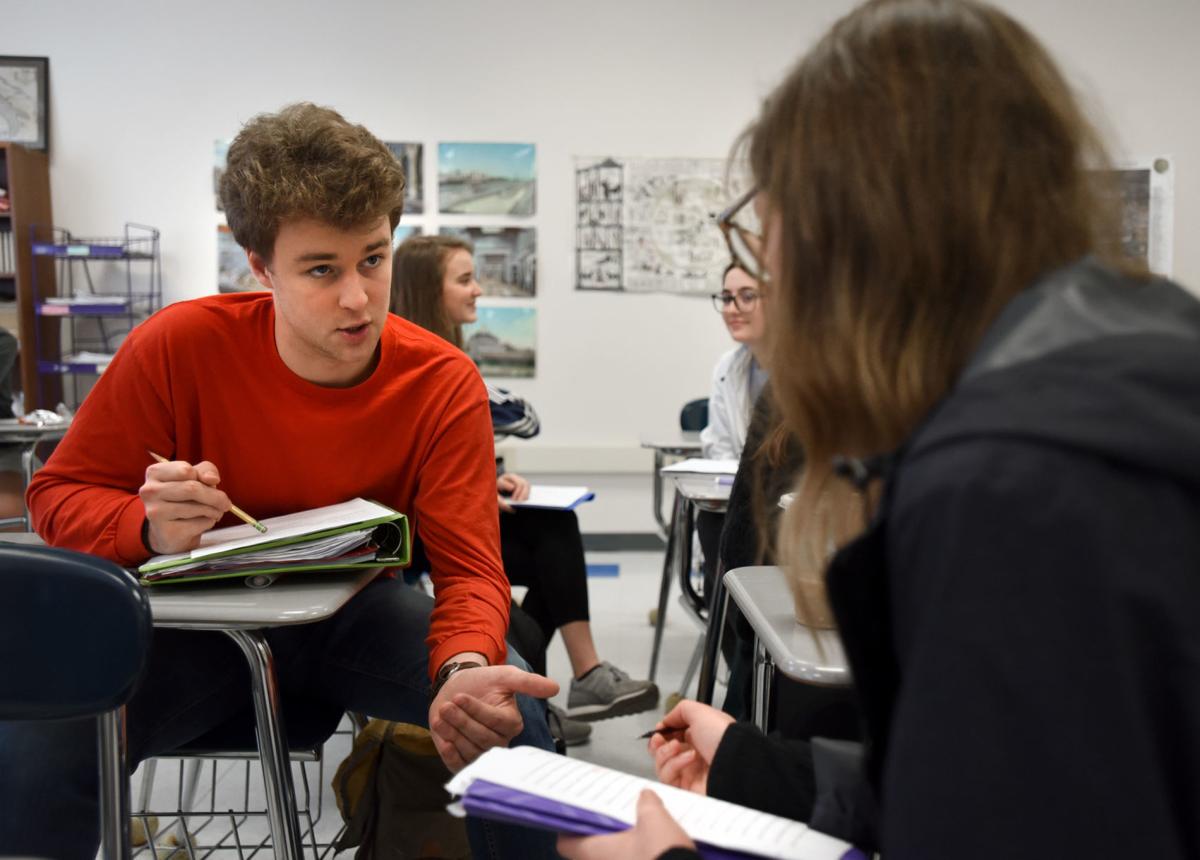 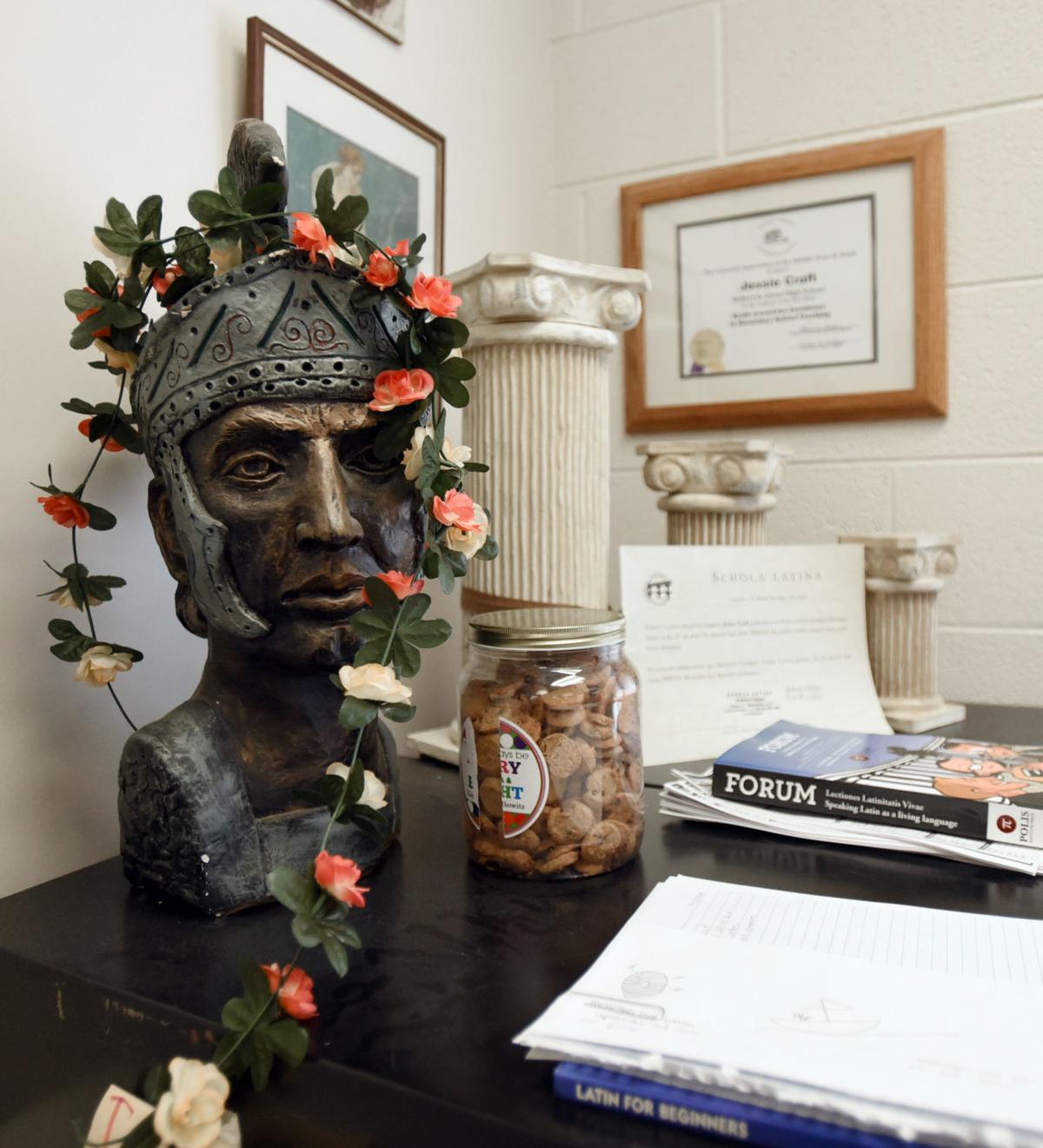 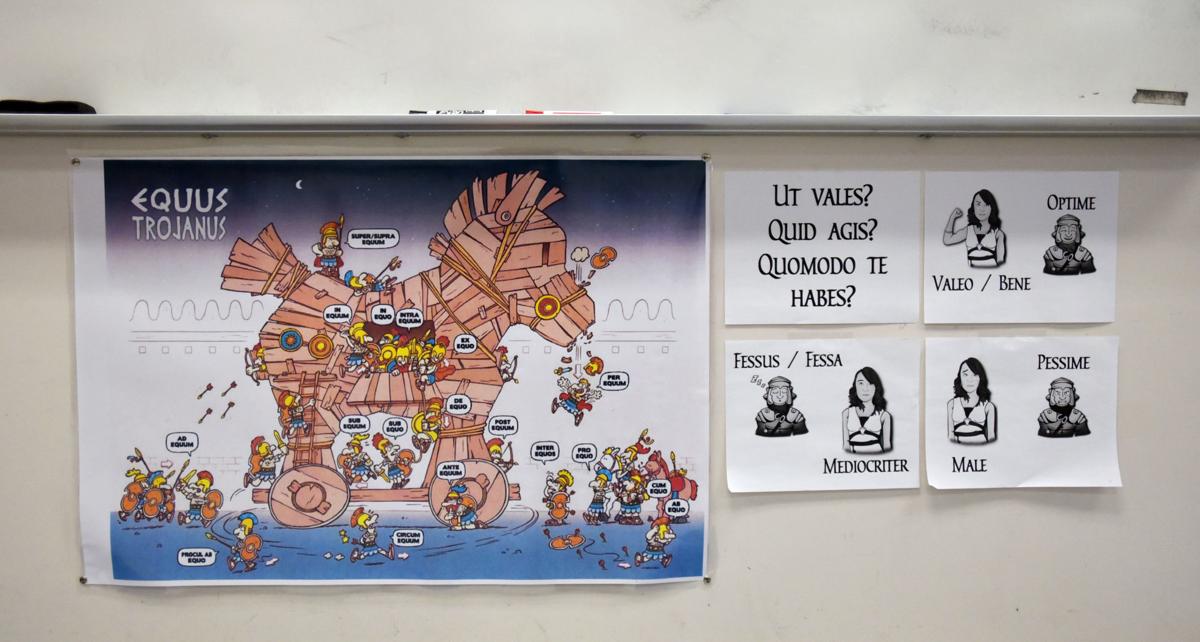 Craft has filled his classroom at Reagan with a number of props to make Latin more real and accessible to his students. “You’ve got to use vocabulary that the kids use, that they understand,” Craft said.

Latin teacher Jessie Craft of Reagan High School works with students in his Latin IV and V class on translating the letters of Cicero.

Craft has filled his classroom at Reagan with a number of props to make Latin more real and accessible to his students. “You’ve got to use vocabulary that the kids use, that they understand,” Craft said.

PFAFFTOWN — Jessie Craft was in shock the first time he asked a question in Latin and one of his students spoke back to him in the same language.

At the time, Craft, who currently teaches Latin at Reagan High School, was a teacher at Glenn High School.

“I was floored,” Craft said. “I was so impressed. I was so excited. That was fuel for my fire.”

Now, in his second year at Reagan, he has conversations with students in Latin, and uses all sorts of tools to make the language fun and engaging — from a big, fake spider to YouTube videos to a popular video game.

Amy Johnson and Michael Canace, 18-year-old seniors in Craft’s Latin — Level 4 and 5 — class, said they like Craft’s style of teaching.

“It’s like a new way of learning Latin,” said Johnson, who has been taking Latin for seven years under three different teachers since middle school. “I’ve always been taught just the grammar. We’ll focus on, say, two sentences for the whole class and just take notes. But, Mr. Craft actually teaches us how to read Latin …. And he speaks to us in Latin.”

Canace said Craft has a “unique, not traditional” method of teaching.

“We try to speak in Latin as much as we can,” Canace said. “Instead of grammar, we try to read stories. Right now, we are reading letters from Cicero to Caesar ….Since it’s letters, we get to learn about different styles of writing.”

The decline and rise

Based on Craft’s observations, the number of people who have been registering for Latin courses and the number of Latin programs in the education system in the United States and Italy, has been on the decline for the past 50 or more years.

He believes a possible reason for this drop-off is the way Latin was being taught.

“The way that Latin has been taught for the past 100-plus years is (the) strict grammar translation method,” Craft said. “On day one, before you’re really learning the language, you’re learning what a pronoun is, a subject and nominative, so you’re learning how to talk about language first.”

He has found that this teaching method is great for some people, but not for everyone.

“I found it to be beneficial and I enjoyed it, but the problem is, and what studies will show, is that the majority of humans don’t really excel in that environment,” Craft said.

He said he and some other teachers want Latin to be inclusive for everyone.

Mary Pendergraft, a professor and chairwoman of classics at Wake Forest University, also said that the number of Latin programs has been falling.

Back at the start of the decline in the 1970s, she said, languages were beginning to be less valued than sciences.

Today, some schools offer a variety of languages, giving students more choices, but, nationally, a large percentage of students take Spanish, she said.

Still, some programs are growing, primarily in K-12.

“He (Craft) would attribute that, as some people do, to different pedagogies, using for instance Latin as a language of instruction, not (speaking in) English talking about Latin but talking in Latin to the students,” Pendergraft said.

Craft used the grammar translation method his first three years at Glenn High School, then realized that just talking about grammar wasn’t connecting with his students.

“After struggling and seeing so many students failing left and right (in Latin),” he said, he decided to try something different, starting with the Minecraft video game.

“It’s basically the video game version of Legos,” he said. “You get into a game and everyone can play at the same time and together in the same world, and you build.”

Over a summer, Craft researched second-language acquisition, the process by which people learn a second language. Then he progressed to teaching Latin like a language.

“What they’re suggesting for us to do is to teach language not too differently than if you were teaching it to a child,” he said of experts in second-language acquisition.

“What they’re saying is to use meaningful communication that was comprehensible. You’ve got to use vocabulary that the kids use, that they understand.”

He said there are several ways to help students understand the language.

Craft often draws pictures, providing an image along with words in Latin, in his classroom, and is extremely animated in front of his students.

His projects with the Minecraft video game include building a Roman temple and a Roman house.

He has been building a model of Ancient Rome block-by-block through Minecraft.

In December 2016, Craft made his first YouTube video, which focused on what a Roman apartment looked like. He now has more than 110 videos on YouTube at Divus Magister Craft. Most of them are in Latin with English subtitles.

He has been invited to teach at a Latin language school in Italy this spring, and has held a virtual class in which 70 adult students were in Italy while he taught them from Winston-Salem.

He also has self-published books and has various resources online at magistercraft.com for teachers and students.

From Italian to Latin

He became interested in Latin while he was studying Italian at UTK.

After graduating from UTK, he moved to North Carolina in 2006 and worked in Charlotte as a regional sales manager for the U.S. subsidiary of an Italian gelato ingredient company call PreGel.

He said he was happy to use the Italian language in his job and excited when he got the opportunity to teach people how to make gelato.

“I had always wanted to teach, even since high school,” said Craft.

It took prompting from his wife, Silvia, who grew up in Urbino, Italy, and is now a professor at Wake Forest University, to convince him to go back to school in 2010 for his teaching license.

Craft has been teaching full time since 2013. He simultaneously taught Latin at Mount Tabor High School for the last three of his five years at Glenn High. He joined Reagan High during the 2018-2019 school year.

Craft was honored by the Classical Association of the Middle West & South with the 2017-2018 Kraft Award for Excellence in Secondary School Teaching. He has been nominated for the 2019 SCS (Society for Classical Studies) Awards for Excellence in Teaching at the Precollegiate Level.

“I think that his innovative style and his energy and enthusiasm, coupled with the fact that he’s built strong relationships with kids has been a tremendous recipe for success for him and, most importantly, our students,” Royal said.