Authorities believe this woman drove the car involved in the armed robbery of a Kernersville sweepstakes business Dec. 23. 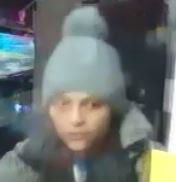 MULBERRY — A man was taken to a hospital after he was shot by a Wilkes County deputy in Mulberry Friday, according to Chief Deputy David Carson.

The deputy reportedly shot the man around 1:20 p.m. in a garage near a home across from Baptist Home Church along N.C. 18 north.

Carson said the man was shot during an investigation and not while the deputy was responding to an incident.

The man who was shot was taken to Wake Forest Baptist Medical Center in Winston-Salem by air, according to Carson.

No one else was injured.

Wilkes County deputies and SBI personnel were on the scene investigating the shooting Friday.

No major injuries in school-bus crash

The bus was at the intersection of Robinhood and Lewisville-Vienna roads around 7 a.m. when a car hit the bus on the front portion of its driver’s side, Campbell said.

The bus appeared to be undamaged, while the passenger vehicle was significantly damaged, Campbell said. There were no reports of major injuries, and Forsyth County EMS responded to the scene.

No students were injured, Campbell said, and they went to school on another bus.

Investigators have linked a car and a woman to an armed robbery that happened Dec. 23 at a sweepstakes business in Kernersville, authorities said Friday. A security guard was shot during the robbery, investigators said.

The suspects used a dark-colored Kia Soul to commit the robbery, Kernersville police said. A woman drove the vehicle, according to authorities.

Police have release photos of a woman they suspect was involved and of the vehicle.

Officers responded to a report of an armed robbery around 4:30 a.m. at the Fun Zone Sweepstakes, 723 E. Mountain St. During the robbery, a private security guard was shot and wounded, police said.

The guard was seriously injured and taken to a local hospital, police said. An undisclosed amount of money was stolen from the business.

Anyone with information about the robbery or the woman’s identity can call Kernersville police at 336-996-3177.

North Carolina couple say they were scammed out of $100K

SALISBURY — A North Carolina couple says they were scammed out of $100,000 in the pursuit of winning a fake $10 million sweepstakes, according to the sheriff’s office and the victims.

A few months ago, the Rowan County couple said they received a call from representatives claiming to be from Publishers Clearing House, a company that offers sweepstakes and prizes. A man on the phone told them they had won a $10 million prize, but they needed to pay 1% up front to secure it, according to the county sheriff’s office.

The victims were convinced when the suspects followed up with falsified documents claiming to be from the Better Business Bureau, the IRS and a U.S. senator, WBTV reported.

The couple sent $100,000 worth of laptops, jewelry and watches as well as $75,000 in gift cards to addresses given by the suspects. When they realized it was a scam, they asked for their money back, but it never came. They’ve since gone into debt paying off the goods.

On its website, Publishers Clearing House advises that if anyone tells you to pay a fee or pre-taxes to claim a prize, the call is likely fraudulent. Capt. John Sifford added that he hadn’t heard of any contests that would require you to pay up front to claim winnings.