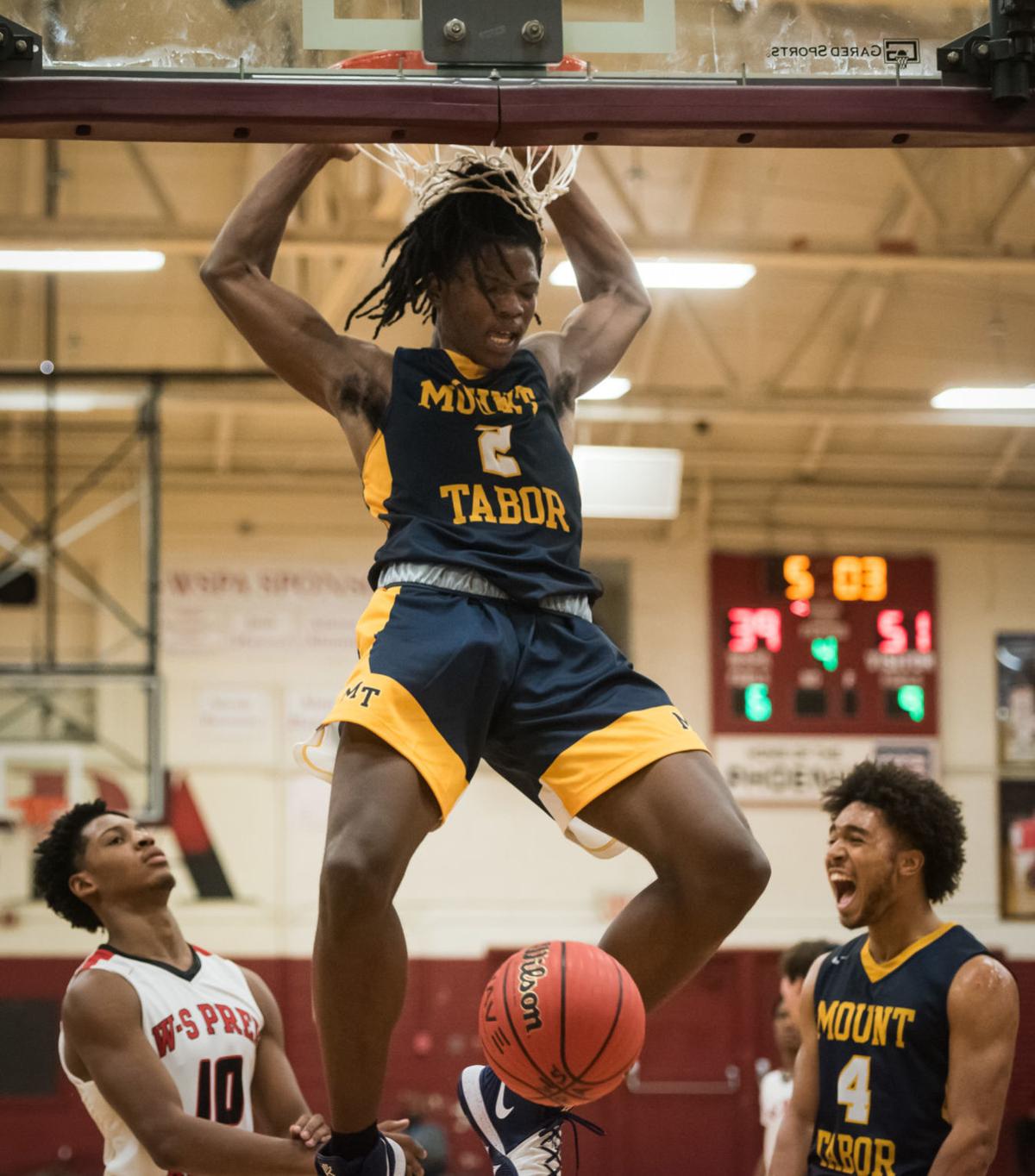 Forward Jakob Moore and Mount Tabor have outscored opponents 849-576 this season in racing to a 13-0 record heading into tonight’s showdown with Greensboro Dudley (11-2). 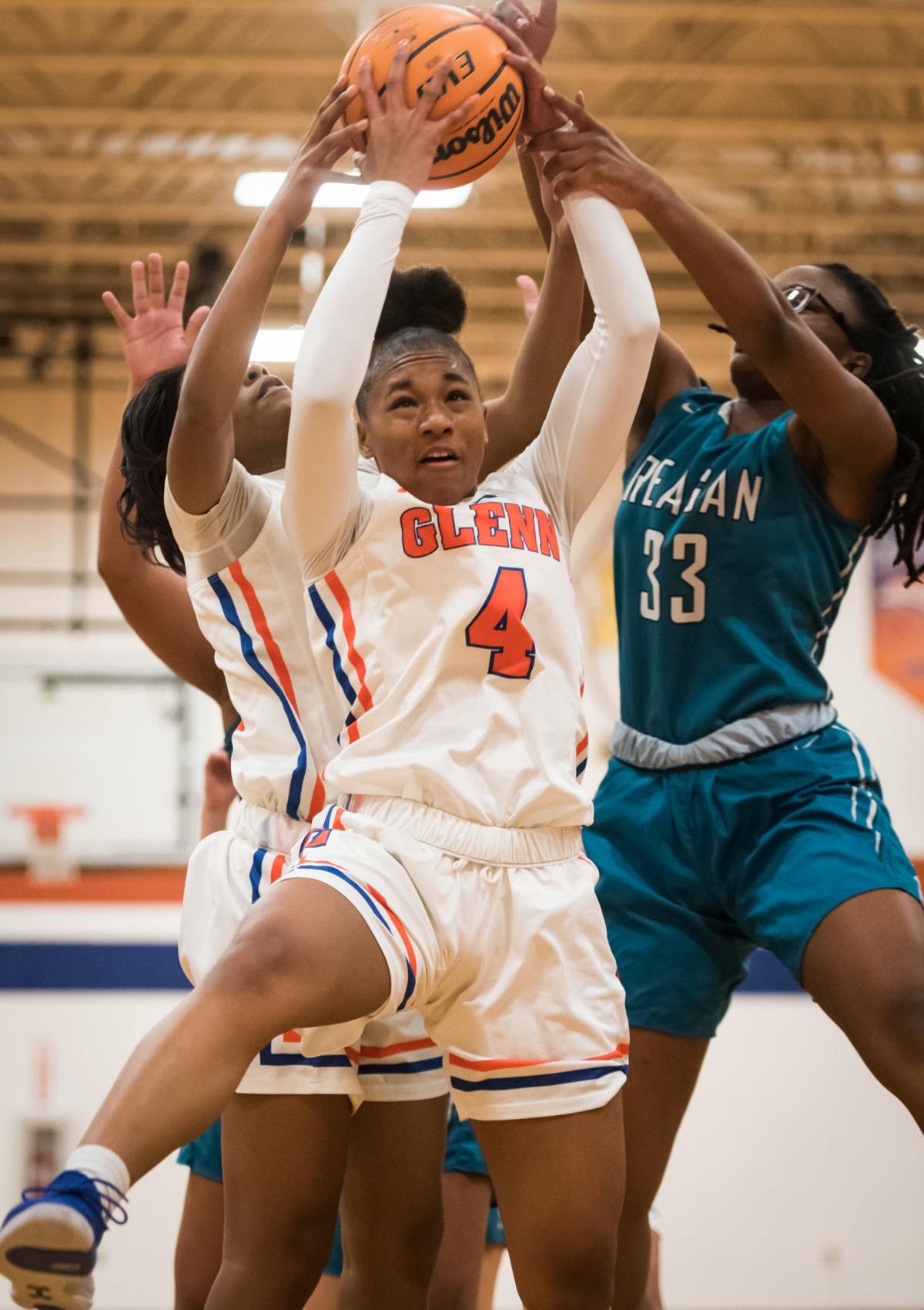 Glenn guard Jaylyn Gathings (center) pulls down a rebound in front of Reagan’s Eleanor Saunders in the first quarter of a Central Piedmont 4-A game on Tuesday. Glenn will face East Forsyth tonight after delivering a sluggish performance in its Central Piedmont opener against Reagan.

Forward Jakob Moore and Mount Tabor have outscored opponents 849-576 this season in racing to a 13-0 record heading into tonight’s showdown with Greensboro Dudley (11-2).

Glenn guard Jaylyn Gathings (center) pulls down a rebound in front of Reagan’s Eleanor Saunders in the first quarter of a Central Piedmont 4-A game on Tuesday. Glenn will face East Forsyth tonight after delivering a sluggish performance in its Central Piedmont opener against Reagan.

Rivalry games and conference openers tip off tonight for high school basketball teams across the Northwest.

Bishop McGuinness, with just a single loss this season, travels to Pilot Mountain to begin its journey through the Northwest 1-A. Ledford travels to play rival North Davidson, and East Forsyth will travel just a few miles to take on a one-loss Glenn.

Here are five area boys and girls basketball games to keep an eye on.

The Spartans have outscored opponents 849-576 this season — their closest game being a 52-49 overtime win over West Stokes in the Pepsi Bracket semifinals of the Frank Spencer Holiday Classic on Dec. 27. Mount Tabor opened Piedmont Triad 3-A play on Tuesday with a win over Western Guilford. Davis Blackwell led the Spartans with 18 points while Jakob Moore had 17 in that 78-42 routing of the Hornets in Greensboro.

Dudley has dropped just two games this season — the most recent a 74-51 loss to rival Greensboro Smith on Tuesday in the conference opener for both teams. Ayden Gamble and Franklin Stockton combined to score 27 points for the Panthers.

REAGAN (4-9, 0-1) at REYNOLDS (6-7, 1-0): Reynolds appears to have climbed out of a rough patch. The Demons won two straight games on that path to facing Reagan tonight at Bryson Gymnasium in their second Central Piedmont 4-A game of the season.

Reynolds defeated Davie County in Mocksville on Tuesday, following that with a victory over West Stokes — what was a one-loss program, currently undefeated in the Western Piedmont Athletic 2-A — a day later. Senior Jaben Mars, a 6-foot-5 forward, had 34 points during that stretch, with Tyreik Leach pitching in with 31.

LEDFORD (8-5, 5-3) at NORTH DAVIDSON (8-4, 6-2): A rivalry tips off at Pete Jones Gymnasium tonight. North Davidson, tied for second in the Central Carolina 2-A, faces Ledford in Welcome.

Junior Jamarien Dalton, a 6-foot-2 guard, has led the Black Knights’ offense, averaging more than 24 points per game. In 11 of the team’s 12 games this season, Tedric Jenkins has scored in double figures. The 5-9 junior guard hit a buzzer-beating 3-pointer for North Davidson to beat Salisbury 67-65 on Tuesday.

East Forsyth last faced Glenn in the Mary Garber Holiday Tip-Off Classic on Nov. 27. The Bobcats defeated the Eagles 57-49 in the Pepsi Bracket championship — their first tournament title since 2002.

Glenn, despite just a lone loss to St. Francis Academy (Md.) in the John Wall Holiday Invitational on Dec. 27, is coming off what Coach Melvin Heggie described as a “sluggish” game against Reagan in its Central Piedmont 4-A opener on Tuesday.

BISHOP McGUINNESS (11-1) at EAST SURRY (5-2): Bishop McGuinness heads to Pilot Mountain for its Northwest 1-A opener against East Surry.

The Villains suffered their first loss of the season in the Carolina Invitational Tournament held in Charleston, S.C. Bishop McGuinness lost to Fort Mill 40-33 on Dec. 28. A matchup against East Surry will be the Villains’ first game in roughly 10 days. Michelle Petrangeli has led the team, averaging more than 13 points this season.

East Surry has won two straight games since its 30-21 loss to nonconference rival Surry Central on Dec. 31. The Cardinals head into their matchup against the Villains with their latest win over the Golden Eagles on Wednesday. Dasia Lambert and Cadence Lawson combined for 17 points.