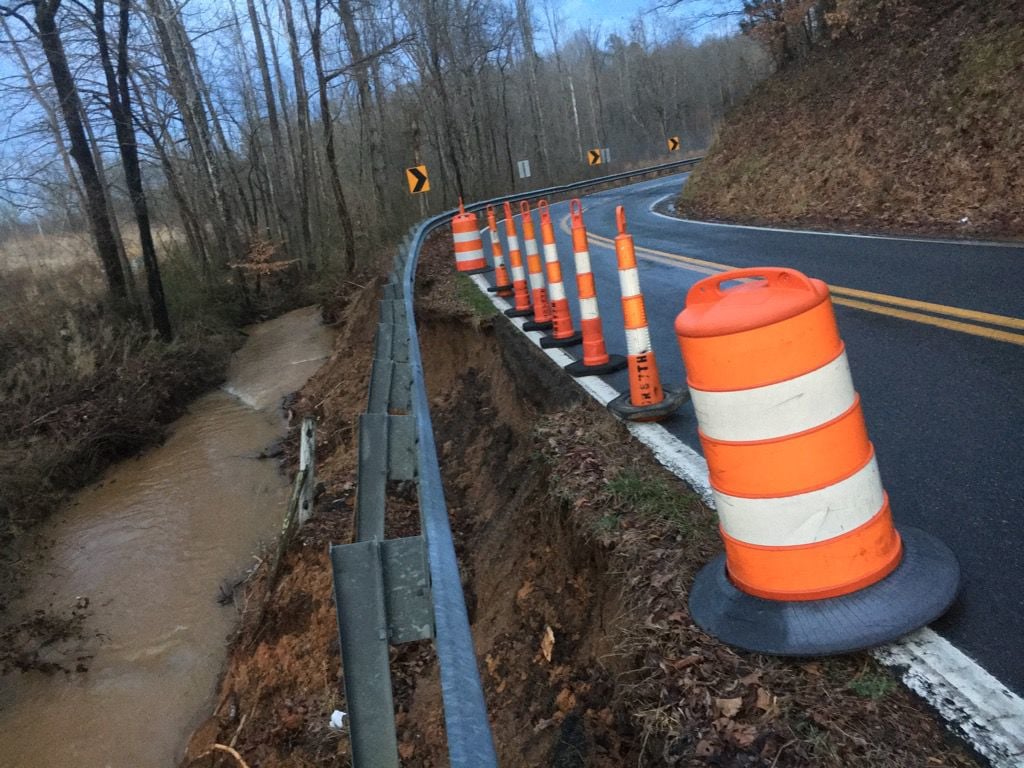 The shoulder washed away on a section of Memorial Industrial School Road near Horizons Park, leaving a guardrail unsupported. Highway officials said the road will remain closed until repairs can be made. 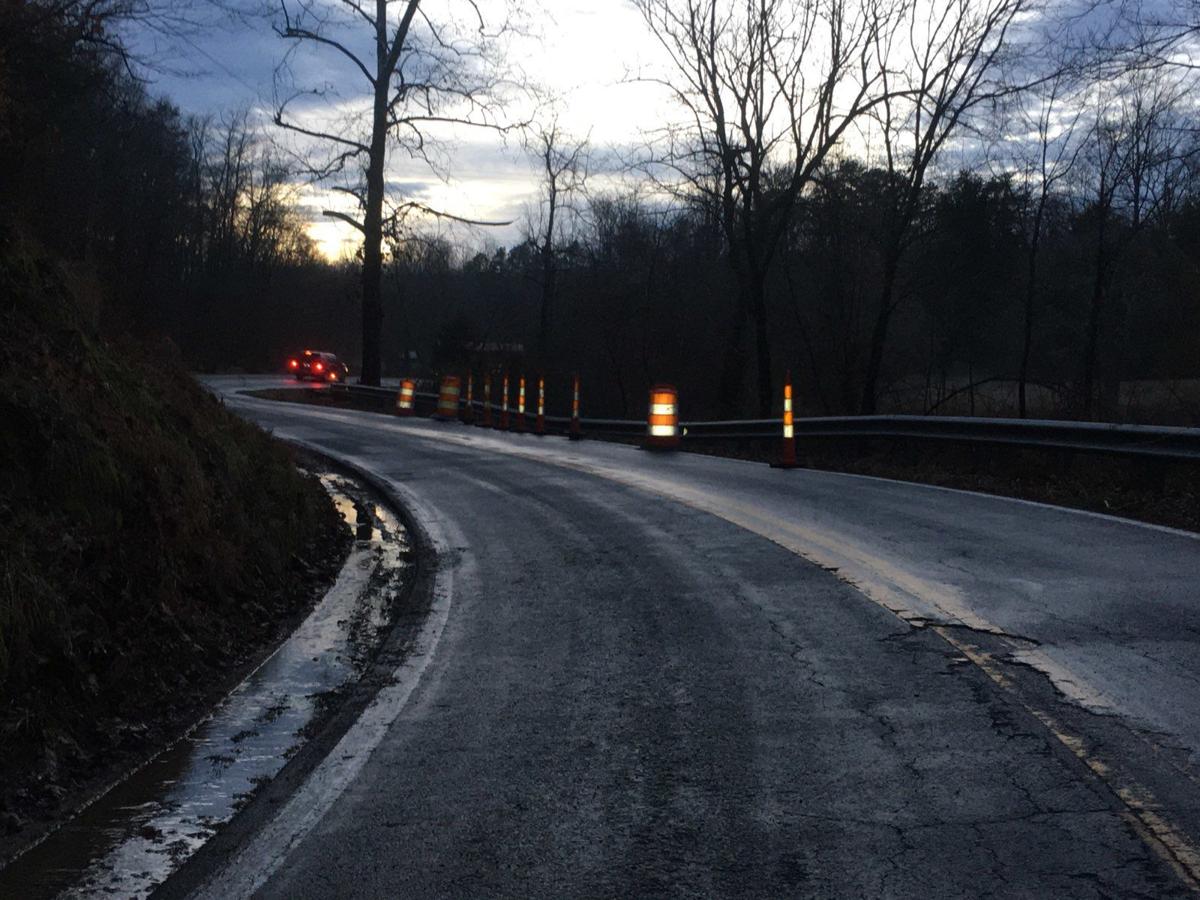 The shoulder washed away on a section of Memorial Industrial School Road, leaving a guardrail unsupported. 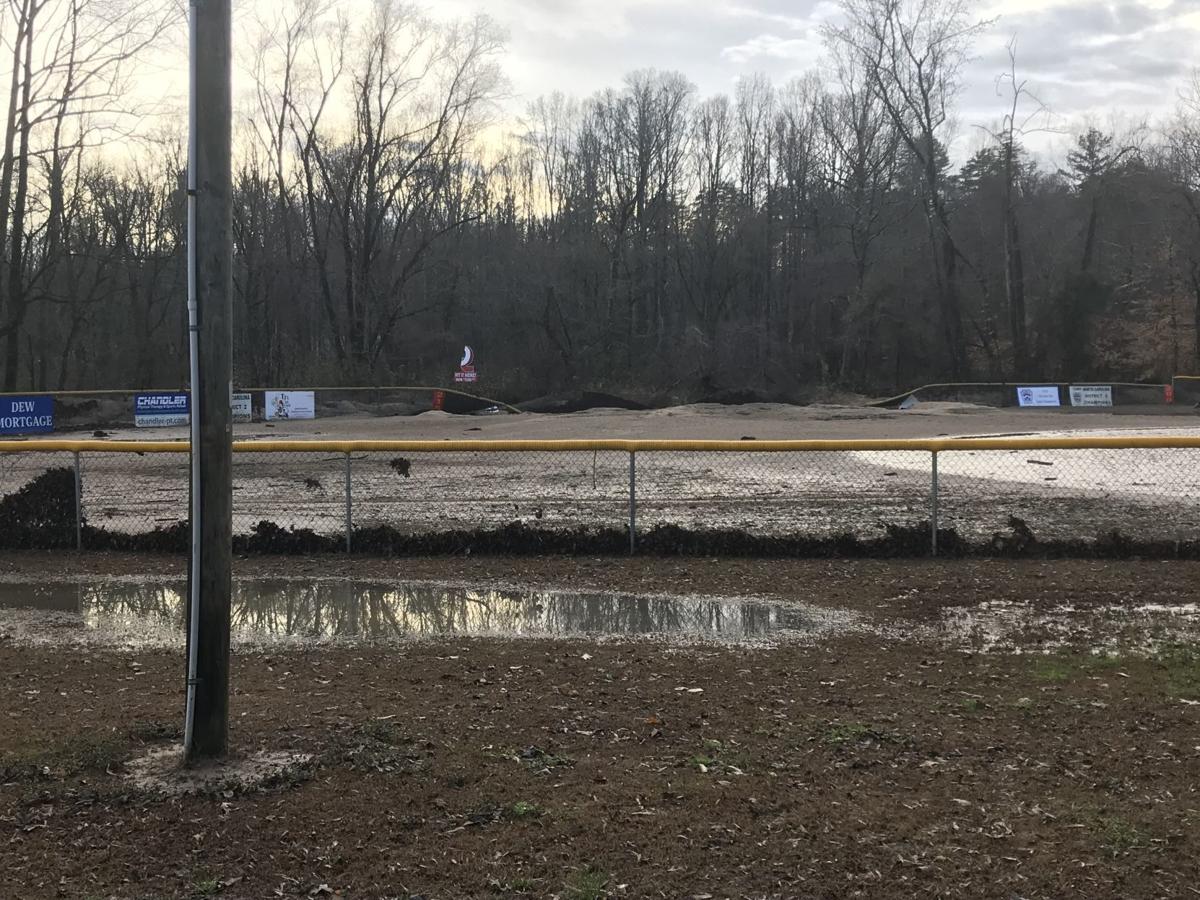 Last week’s floodwater from Muddy Creek damaged this baseball field at the Winston-Salem National Little League complex known as The Bridge. The creek, which flows into the Yadkin River, runs behind the baseball fields.

The shoulder washed away on a section of Memorial Industrial School Road near Horizons Park, leaving a guardrail unsupported. Highway officials said the road will remain closed until repairs can be made.

The shoulder washed away on a section of Memorial Industrial School Road, leaving a guardrail unsupported.

Last week’s floodwater from Muddy Creek damaged this baseball field at the Winston-Salem National Little League complex known as The Bridge. The creek, which flows into the Yadkin River, runs behind the baseball fields.

Additional rain this week in the Triad and Northwest North Carolina brings the risk of more flooding in both regions, forecasters say.

The potential for flooding along the Yadkin and Dan rivers in North Carolina is high through Feb. 20 because of current conditions and the chance of more rain, the National Weather Service said. The ground in the Triad and the northwestern counties is saturated with water.

In Forsyth County, a popular way to get to Horizons Park is closed because of flood damage, according to information Tuesday from the N.C. Department of Transportation.

The shoulder on a section of Memorial Industrial School Road near N.C. 8 washed away along Trick-Um Creek, leaving a guardrail unsupported and the road dangerous for drivers, highway officials said.

Highway officials said the road will remain closed until repairs can be made. The road runs between N.C. 8 and Red Bank Road. Horizons Park is located about halfway between the two.

Highway officials said that until the repairs are made, people can get to Memorial Industrial School Road by following a detour route along N.C. 8 and Shiloh Church, Baux Mountain and Red Bank roads.

Overall, this round of flooding in the area is expected to be minor compared with last week’s widespread flooding that hit North Carolina and caused five deaths in the Southeast, forecasters say. A Gaston County resident died last Thursday in a storm-related vehicle crash.

Moderate to heavy rain is expected through Thursday in North Carolina and other mid-Atlantic states as a slow-moving cold front combines with moisture from the Gulf of Mexico, the weather service said.

“We should not expect any more major flooding,” said Chrissy Cockrell, a weather-service meteorologist in Raleigh.

This week’s round of rain shouldn’t have the thunderstorms that produced last week’s heavy rainfall, said Vance Joyner, a weather-service meteorologist in Blacksburg, Va. However, the Yadkin and Ararat rivers as well as creeks and streams could flood again, he said.

Rainfall totals through Thursday will range from about ¾ inch in Winston-Salem to 1 to 2 inches in the northwestern counties, the weather service said.

The floodwater was about 6½ feet at its peak, said Geoff Lassiter, a board member of the Little League organization.

The water began to recede into the creek’s banks by Saturday morning, said Lassiter, the president of the Carolina League, a minor-league baseball organization, and the former president of the Winston-Salem Dash, the city’s minor league team.

The flooding left behind water-logged fields with debris scattered throughout the 10-acre site. The flooding also damaged an outfield fence on one of the fields.

The flooding also caused more than $50,000 in damage to the fields and other facilities at the site, Lassiter said. A group of 28 teams play at the complex.

The league’s organizations will ask for donations to help pay to repair the flood damage, Lassiter said.

Matt Dixson, the president of the Winston-Salem National Little League, sent an email Tuesday to the organization’s families that said baseball will be played at the complex this spring. Games are tentatively scheduled to begin on March 27.

“Although this was one of the worst floods we have experienced, water and flooding is nothing new to The Bridge (the league’s fields), and we will once again rebound from what Mother Nature delivered,” Dixson wrote. “Once the complex is dry enough to re-enter, we will do so and begin making formal plans to repair any damage left behind.”

Last week’s heavy rain also resulted in some homeowners experiencing flooded basements, authorities said. Employees at Magic Rooter Drain Sewer and Forsyth Rooter Services, both in Winston-Salem, said Tuesday that they received calls from about 10 homeowners who had flooded basements.

Homeowners can prevent basement flooding by cleaning their gutters to stop rainwater from backing up and flowing over the sides of the gutters instead of through downspouts, said Phyllis Smith, an agent with the Forsyth County Cooperative Extension Service.