Karen Appert regularly attends the Aging Well Lunch & Learn sessions hosted by Wake Forest Baptist Health's Sticht Center for Healthy Aging and Alzheimer's Prevention. Appert and her husband are caregivers for Appert's mother, who has dementia, and the sessions help provide more information on the condition. 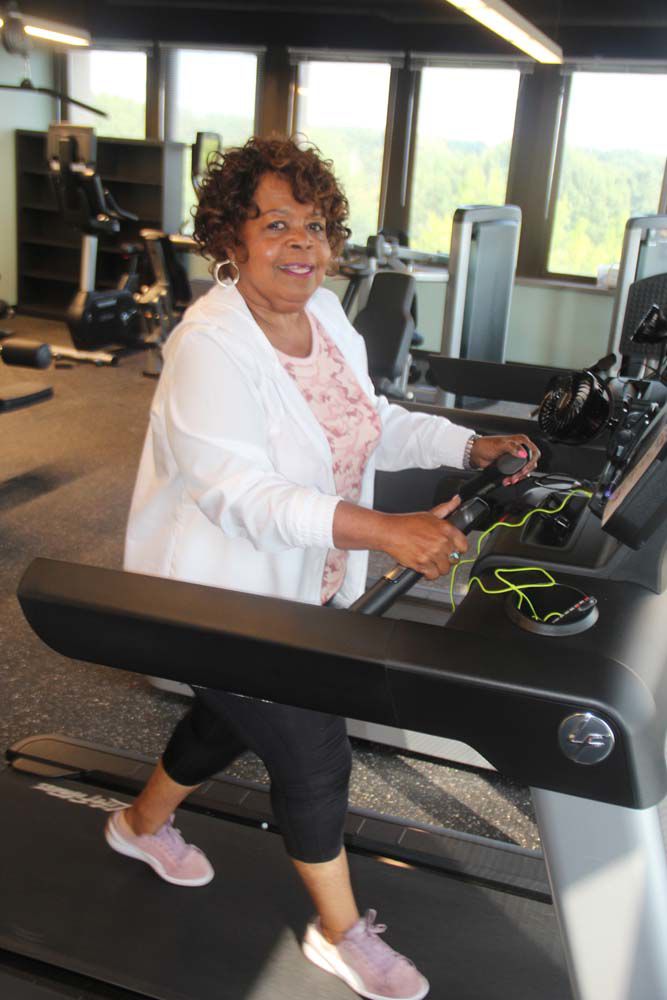 Marion Wilson-McGainey is a participant of the INFINITE and UPLIFT studies at the Sticht Center. 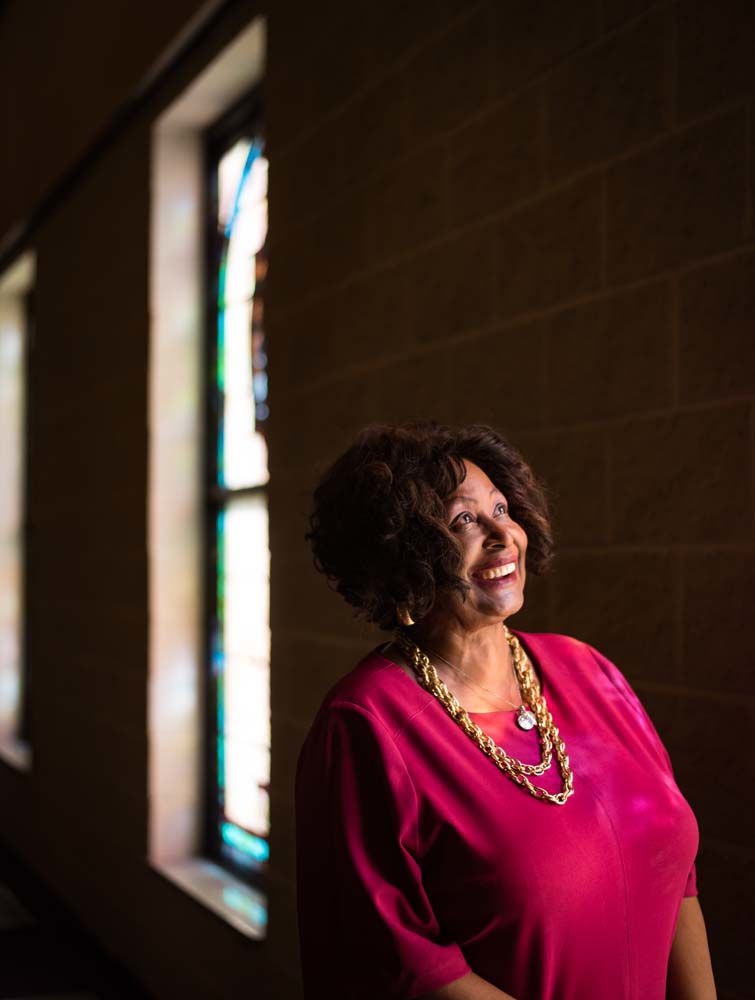 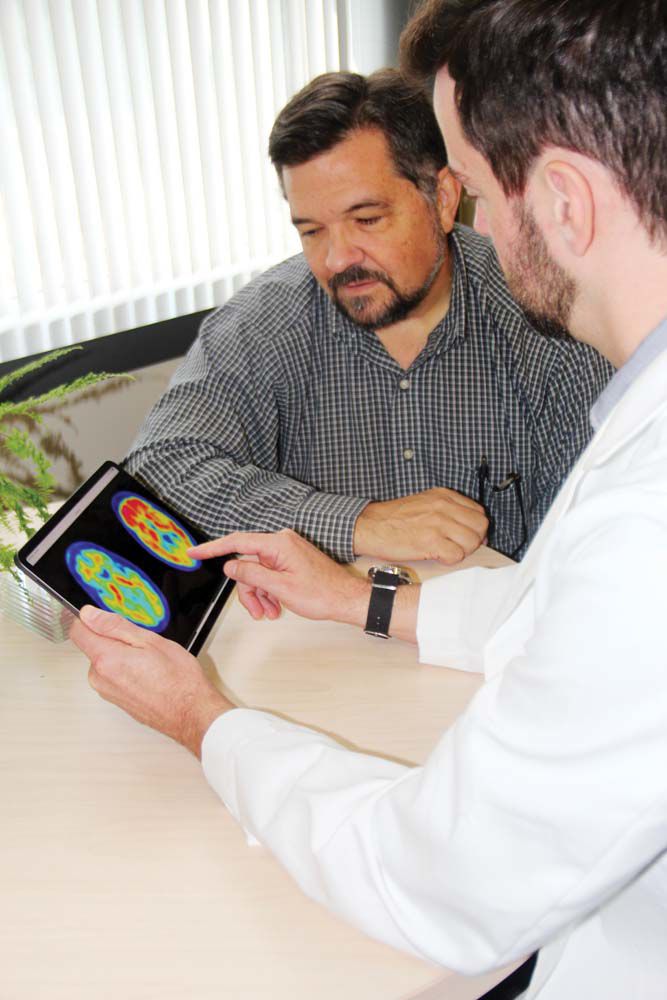 Bob Cain and a physician look at scans of Cain's brain. Cain is a participant in the Sticht Center's Healthy Brain study, where he underwent a series of physical exams and regularly partakes in memory challenges.

Karen Appert regularly attends the Aging Well Lunch & Learn sessions hosted by Wake Forest Baptist Health's Sticht Center for Healthy Aging and Alzheimer's Prevention. Appert and her husband are caregivers for Appert's mother, who has dementia, and the sessions help provide more information on the condition.

Marion Wilson-McGainey is a participant of the INFINITE and UPLIFT studies at the Sticht Center.

Bob Cain and a physician look at scans of Cain's brain. Cain is a participant in the Sticht Center's Healthy Brain study, where he underwent a series of physical exams and regularly partakes in memory challenges.

Over the last several years, senior Marion Wilson-McGainey has participated in multiple studies at Wake Forest Baptist Health’s Sticht Center for Healthy Aging and Alzheimer’s Prevention. Now, she’s urging her friends to do the same — and not just because she wants them to contribute to the cutting-edge research.

“It’s very beneficial to you as well,” she says.

The Sticht Center is one of only two institutions in the country that have both National Institutes of Health (NIH)–supported Claude D. Pepper Older American Independence and Alzheimer’s Disease Research Centers under one roof. Since there is neither a meaningful treatment nor a cure for Alzheimer’s, the researchers focus on finding ways to prevent the disease.

“The whole focus of our center is to provide the resources, education, and support to help our community’s older adults live to the fullest at every stage,” says Deb Burcombe, program director of outreach at the Sticht Center. The programs offered at the Sticht Center run the gamut from observational to intervention studies.

Wilson-McGainey has been part of a study called INFINITE (Investigating Fitness Interventions in Elders), and she is currently a participant in UPLIFT (Utilizing Protein During Weight Loss to Impact Physical Function).

During a recent interview, she spoke of several perks that she and her fellow study participants have enjoyed, from comprehensive health screenings to suggestions for eating and living healthier.

At one point, Wilson-McGainey even stopped cooking; that’s because the Sticht Center provided her three highly nutritious meals a day that were customized for the study. She also undertook an exercise plan in which she used a Sticht Center treadmill several times a week. A dietician helped keep her on track.

The result? Wilson-McGainey made her weight-loss goal. She has since learned skills to maintain her optimal weight; her use of the MyFitnessPal mobile app to track her caloric intake, for example, reflects the suggestions of a dietician who has monitored it and suggested adjustments.

Like Wilson-McGainey, Bob Cain is an equally enthusiastic study participant at the Sticht Center. He is in the second year of a five-year Alzheimer’s prevention study called Healthy Brain because he fears that Alzheimer’s might be in his genetic makeup; his maternal grandmother was diagnosed with the disease. He spoke of a battery of physical exams he underwent before the study, including an MRI. He says his study examiners push him “as hard as they can.” They participate in various memory challenges and games, like repeating back names of dissimilar objects in a series, or drawing diagrams after being shown them for a very short period of time.

In time, study-generated findings will end up in the records of Cain’s physicians, who can, if necessary, recommend brain-friendly changes in his diet and lifestyle.

If participating in studies is not your thing, the Sticht Center can be a source of practical and timely information on ways that older adults can live their best lives and age well. This comes in two forms, each named Aging Well: Lunch & Learn sessions and free hour-long lectures.

“It was very informative,” Wade says. “We enjoyed it. We look forward to having them back.”

As for the lectures, these are presented at 6 p.m. the second Tuesday of each month in the Auditorium of the Forsyth County Central Library, 660 W. Fifth Street in Winston-Salem. Karen Appert attends them often for at least three reasons.

First, the lecturers, who are Wake Forest researchers and physicians, “help older adults and their caregivers better understand the aging process, including what is considered normal aging and what is not,” Appert says. The presenters use layman’s terms so that the audience can get a better grasp of the subject matter.

Second, the series informs the public “about the amount of work that Wake Forest Baptist Health and the Sticht Center do in the aging field.”

Third, Appert and her husband are caregivers for Appert’s mother, who has dementia and multiple sclerosis.

“The Aging Well presentations have helped better our understanding of those conditions,” she says.

To learn more about: