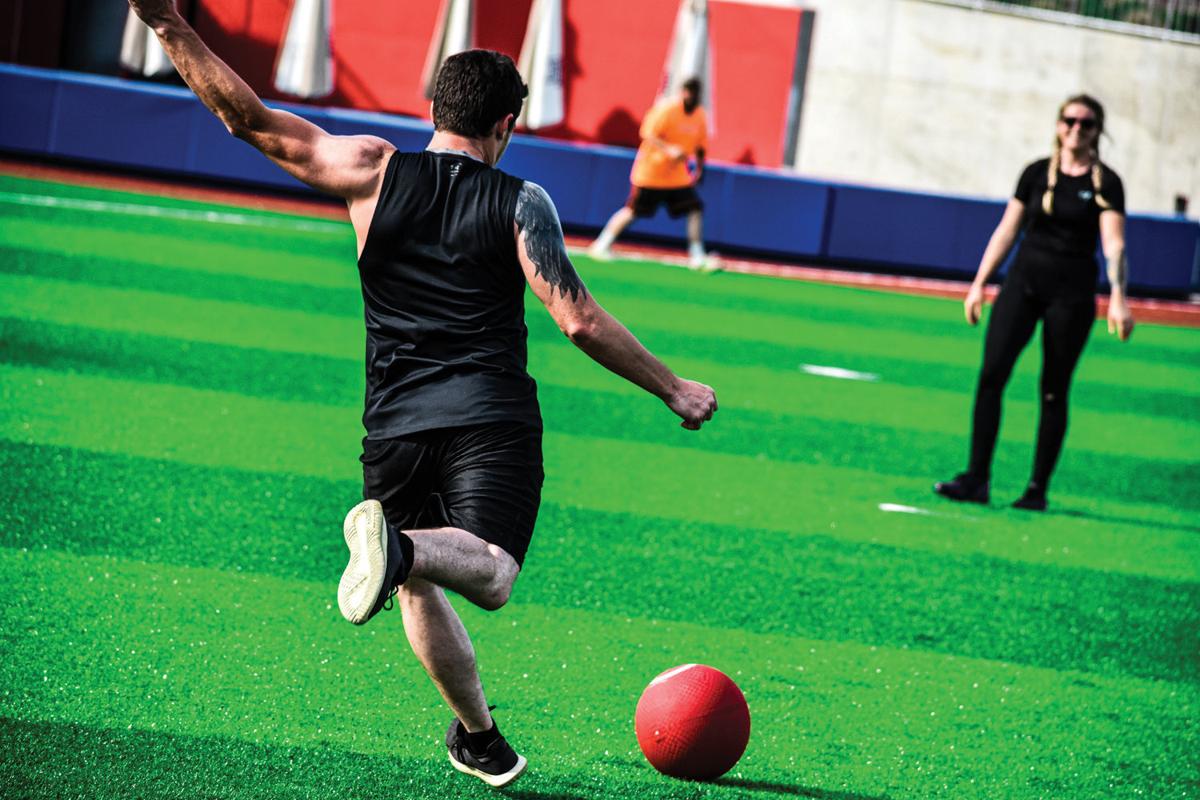 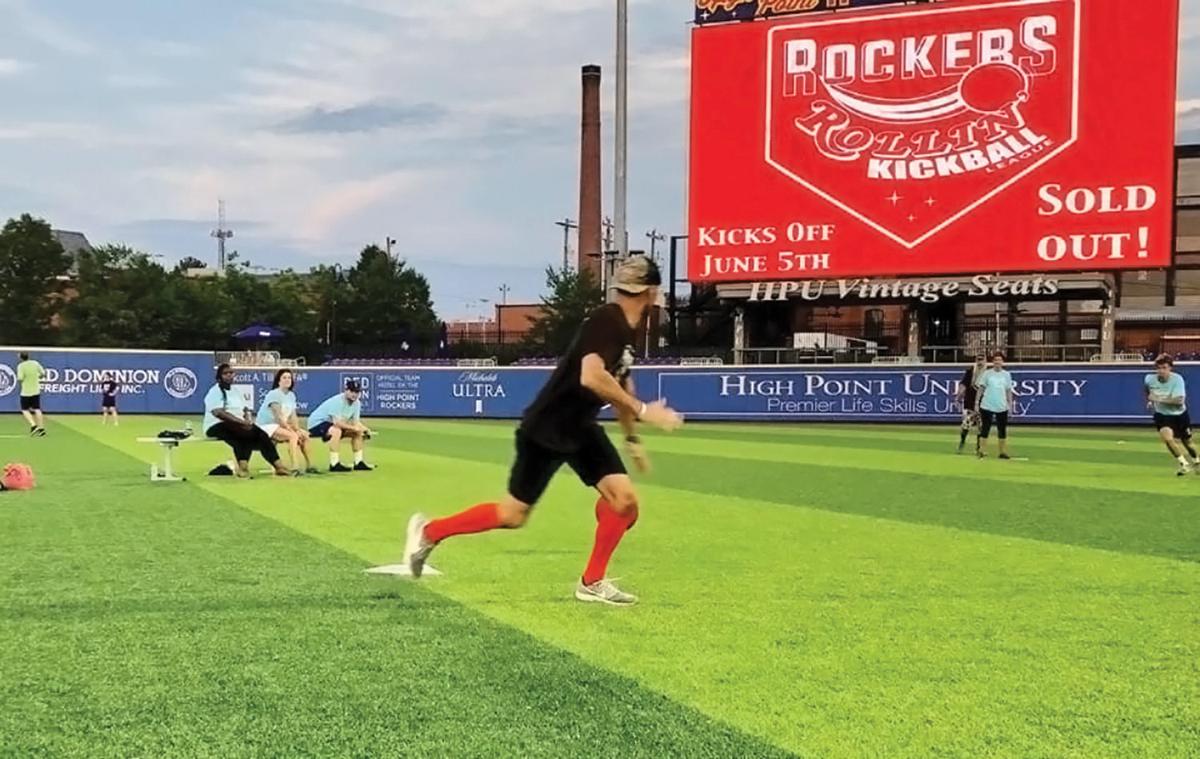 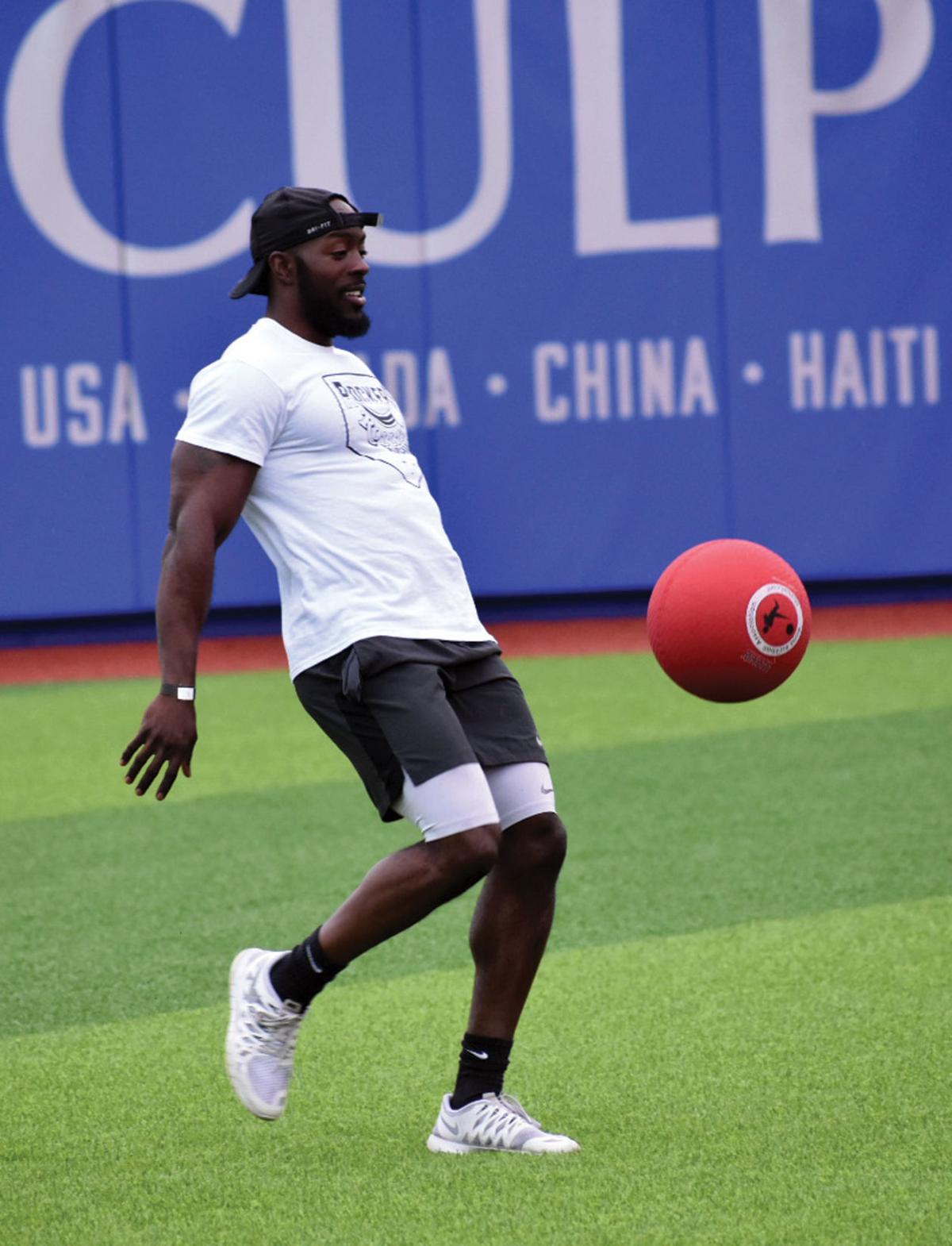 Can an athlete wear rainbow knee socks and short shorts and still intimidate the opposition? Jenn Newton likes to think so.

“I would go into the bathroom and flex my muscles to try to scare the other girls,” she says.

Newton is a member of the Namaslayers, a team that competed in the first season of the Rocking  Kickball League in High Point. The league, launched in 2019 and gearing up for its second summer season (COVID-19 pending), brings adults together to compete in a game many haven’t played  since elementary school.

The Namaslayers and their competitors play at the baseball stadium opened in 2019 for the inaugural season of the High Point Rockers baseball team. But this isn’t your old PE teacher’s kickball game: The adult version includes beer, music, and a Jumbotron.

“I don’t think people realized you could play kickball on a baseball field until they saw it,” says Christian Heimall, the Rockers’ assistant general manager.

Heimall and the team’s original president, Ken Lehner, brought the kickball idea with them from New York state. They hosted a league at their old ballpark in Pomona.

“I eventually ended up being a part of the group that ran the league there for three years,” Heimall says. “They have a very successful summer and fall league.”

and sometimes live action from the kickball games on the field.

The summer season is scheduled to start May 6, subject to pandemic developments.

Zach Barnes, an agent with State Farm Insurance in High Point and member of the Twin City Kiwanis Satellite Club in Winston-Salem, plays for the Northwood Animal Hospital Growlers.

“When they’d have the camera out there, and they’d have you up on the Jumbotron, it was a bunch of people trying a little harder, reliving the old high school glory days,” he says. “It was fun going and having some beers with friends and enjoying the nice evenings of the summer.”

Debbie Meier, one of Newton’s teammates and coworkers, sponsors their team. She owns a High Point café and coffee shop called DeBeen Espresso that includes a yoga studio called Pure Light Yoga — hence the Namaslayers. Newton manages the cafe. Their team includes some of their yoga students.

“A bunch of us are moms, so it was our night that we could really look forward to,” says Meier. “The family could sit in the stands and watch us, or they could just stay at home.”

Family and friends are welcome, Heimall says, and the High Pint taproom sells beer and snacks.

“We actually have a lot of families where mom and dad are playing while the kids are up in the playground, and enjoying it and seeing the ballpark a little differently,” he says.

The umpires are Rockers interns or experienced college students. They emphasize fun game play, according to Barnes.

“The goal was to get people to kick the ball and put it into play,” he says. “They would be generous with calling strikes.”

The league has a maximum of 20 teams, with 16 competing in 2019. Each team can have up to 18 players, with no more than 11 on the field at a time. Teams play twice on game days, and playoffs determine the league champion. The Spitfires took the 2019 summer title and Parks & Rec won it all in the fall.

“We were the no. 1 team pretty much all year and then got beat in the playoffs,” Barnes says. “We had a couple of people get injured, and then another one had the birth of his first child. For whatever reason, he deemed that more important.”

Defenders get outs by catching a kicked ball in the air or hitting a base runner with the ball. They’re not allowed to target the head or face, though kickballs often have minds of their own.

“It looked a lot more like T-ball sometimes,” Barnes says. “Somebody would throw the ball and it would not go exactly in the direction they wanted, and all the base runners would advance an extra base. It was quite humorous, and maybe not the most elegant display of athleticism.”

Players often find that kickball is more challenging than they remember it from childhood.

“The first couple of weeks, as people were adjusting to the quote-unquote easy game of kickball, they were dropping like flies,” Meier says. “Torn this, torn that, blown this, blown that. It was like, ‘Whoa! Reality.’”

Games end after one hour or seven innings, whichever comes first. Players have to be 21, and range in age from 20s to 60s. Organizers cultivate an inclusive, enjoyable atmosphere, and each team has to have at least four women on the field at all times.

“We found pretty early on when we were doing this in New York that you’ll get teams that stack up with a bunch of former collegiate athletes,” Heimall says. “The whole point about this is to be fun, and for it to be something that the community can enjoy.”

That doesn’t mean the games aren’t competitive, though. Witness the Namaslayers’ intimidation tactics — even if they are mostly tongue in cheek.

“If we just lightened the atmosphere with laughs and jokes, it was very contagious,” says Meier, who burst into laughter when Newton recounted her mirror intimidation tactics.

All but three Namaslayers were women in 2019. The team will pick up a powerful new player in 2020, now that Charis Dinger — a DeBeen barista — has turned 21. She recently graduated from High Point University, where she majored in exercise science and ran cross-country and track and field. Dinger grew up in a small Pennsylvania town, and she and her friends spent a lot of their free time playing kickball and soccer.

“High Point’s become my new home,” she says. “I was like, ‘This will be a great opportunity for me, someone who’s new to the area.’ And I’ve never been here when school hasn’t been in. I can meet the community and make new friends.”

The Namaslayers are eager to get back on the field after losing 3 to 1 in the second round of the summer league playoffs in 2019. It was their first loss after an 11-game winning streak. Kickball players have their superstitions like other athletes, and Newton credits the streak to her lucky uniform.

“Jenn wouldn’t even wash her shirt from game to game,” Meier says.