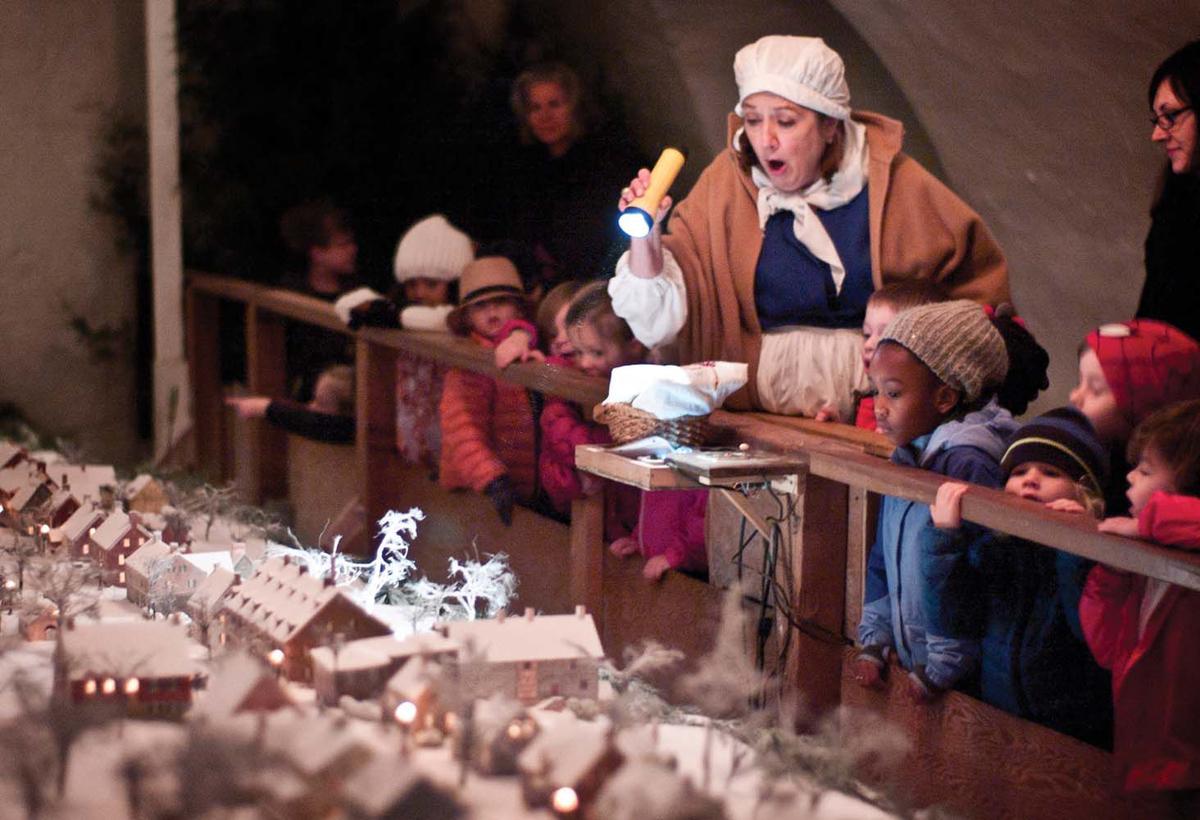 Marcia Phillips uses a flashlight to point out features of the "putz," a model of 19th-century Salem in the basement of the Single Brothers House, to children from Salem Montessori. 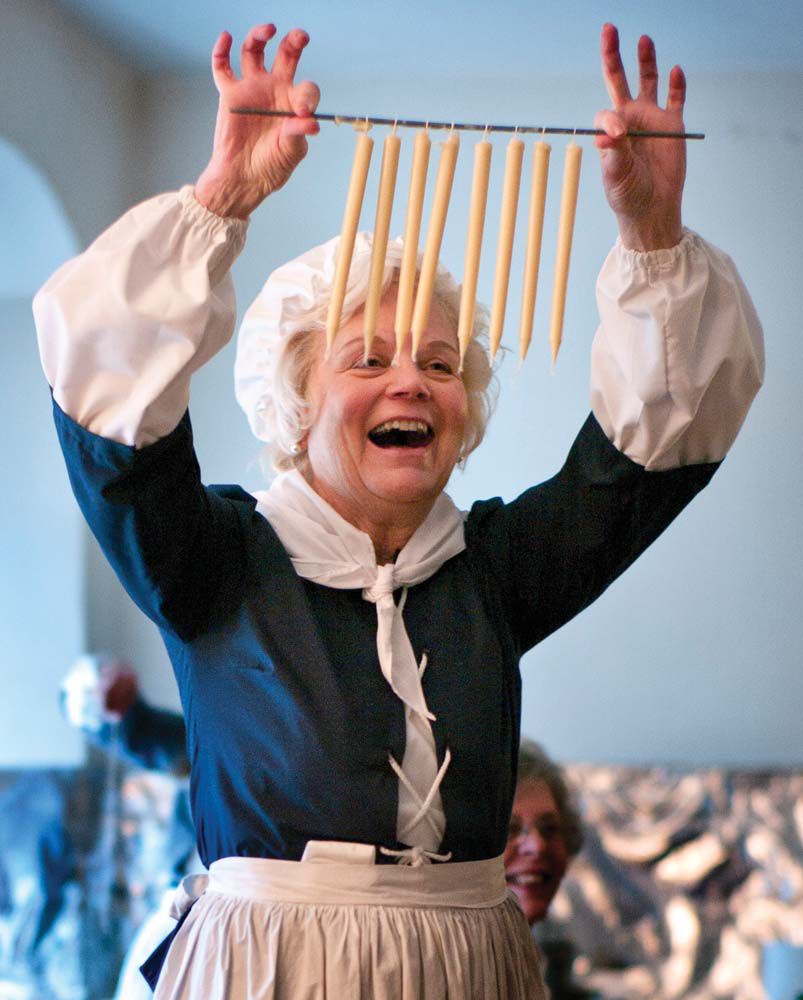 CarolAnn Adcock displays a full rack of eight beeswax candles she just pulled fresh from the mold at the Single Brothers House in Old Salem. 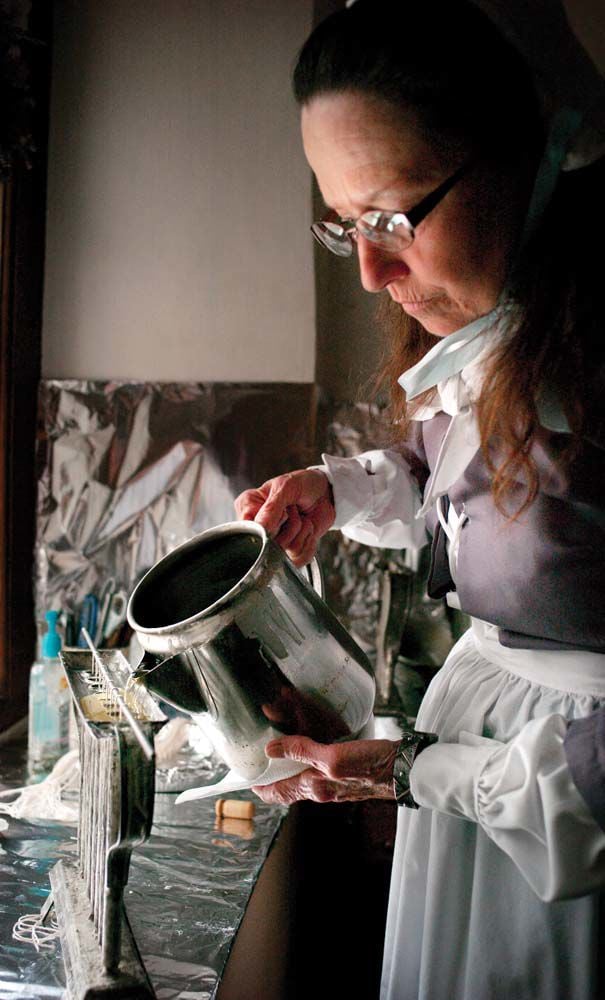 Valerie Cook pours molten beeswax into an 8-candle mold for the Candle Tea in the Single Brothers House of Old Salem. 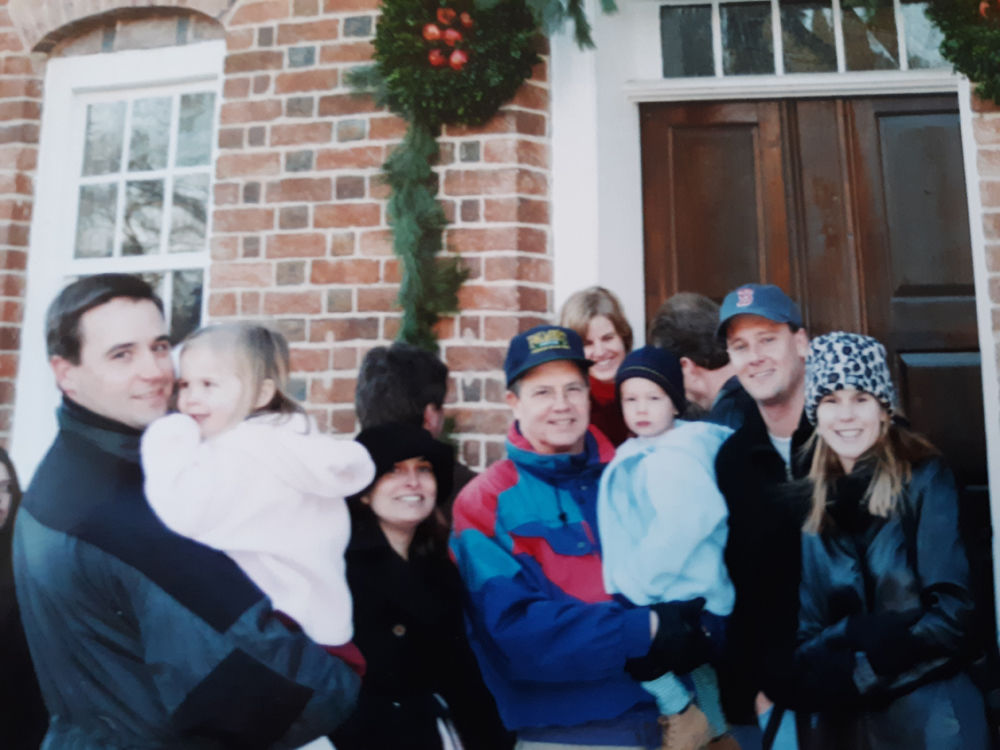 Myrtie Davis and family wait in line at Candle Tea in 2001. 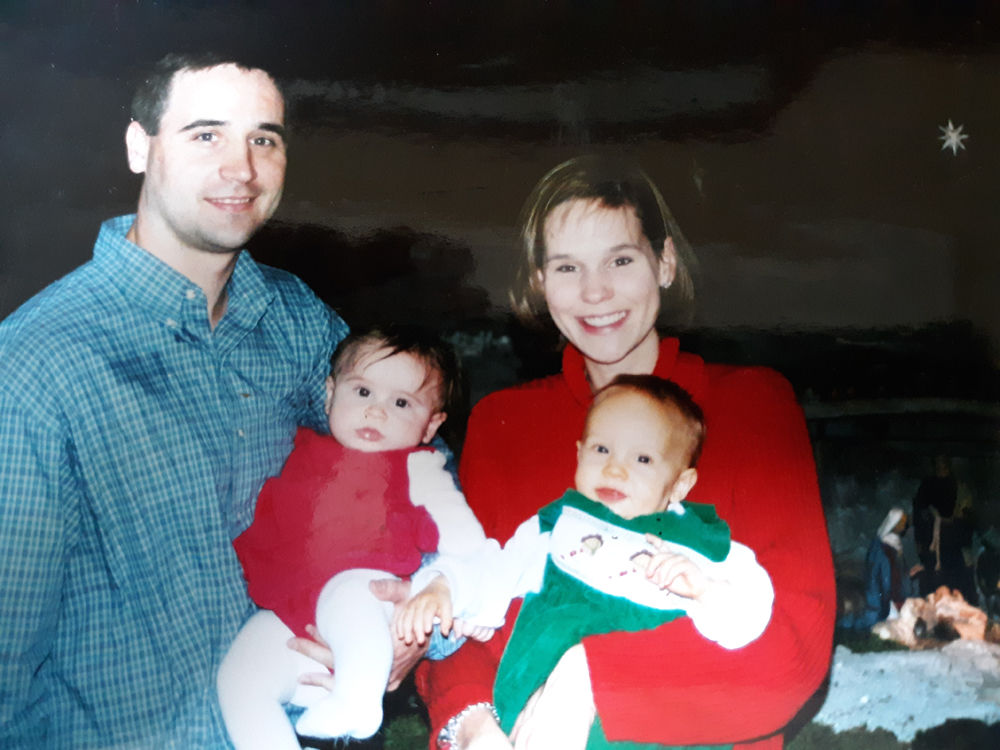 Marcia Phillips uses a flashlight to point out features of the "putz," a model of 19th-century Salem in the basement of the Single Brothers House, to children from Salem Montessori.

CarolAnn Adcock displays a full rack of eight beeswax candles she just pulled fresh from the mold at the Single Brothers House in Old Salem.

Valerie Cook pours molten beeswax into an 8-candle mold for the Candle Tea in the Single Brothers House of Old Salem.

Myrtie Davis and family wait in line at Candle Tea in 2001.

For the Davis family, Christmas has begun with Candle Tea for the past half century.

“Our son, who is now 50, was riding on Bill’s shoulders” the first time they went, Myrtie Davis says. “He was about seven months old, and we’ve gone every single year since then.”

Myrtie and her husband, Bill, have attended more than half of the 90 Candle Teas held annually at Old Salem since 1929, often accompanied by their three children and, at one time or another, most of their nine grandchildren. The festivities draw 10,000 to 14,000 people every December to hear Christmas carols, watch the making of Lovefeast candles, enjoy Moravian coffee and sugar cake, and view elaborately constructed seasonal scenes.

“It gives you that feeling of what Christmas should be,” says Myrtie, a volunteer for decades with local charities such as Meals on Wheels and Samaritan Inn.

“When you walk out, you have the Christmas spirit, I’ll tell you that,” adds Bill, an attorney with Bell, Davis & Pitt.

Candle Tea began almost a century ago with the public display of a Nativity scene known as the putz, a variation on the German word “putzen,” meaning “to decorate.” Both the putz and the celebration have expanded and moved around over the years, eventually landing in the 250-year-old Single Brothers’ House. Organizers added another putz, a scale model of Old Salem, in 1949. That model grew every year for decades, going from eight buildings to about 100.

“We used to add a building every year until it was built out,” says Jim Baucom, a Realtor with Coldwell Banker Triad, chair of the Putz Committee for about five years, and a volunteer for about 35 years. Now, the volunteers focus on refurbishing the older buildings.

Money raised from Candle Tea tickets supports a variety of causes, including local charities and Moravian mission work, according to Beverly Moore, chair of Candle Tea for 2019. The event has raised approximately $125,000 over the past five years, benefiting about 60 organizations, she says.

Visitors begin their Candle Tea experience by lining up on the sidewalk. A Moravian brass band starts the holiday music outdoors. The music continues inside with caroling, which is accompanied by an organ built by David Tannenberg in Pennsylvania in 1800.

Guides in 18th-century costumes escort visitors to a fragrant room where volunteers show how to make Moravian Lovefeast candles from beeswax and beef tallow, with cotton wicks. Next comes traditional refreshments in the historic kitchen. Finally, it’s down to the sub-basement for the grand finale: the putz.

“It’s so much fun if someone has never seen it before,” Baucom says. “They come down the steps, well below ground. They’ve just had sugar cake and coffee, so they’re in a jovial mood. You will hear, ‘Wow!’ There’s some real excitement.”

The model buildings are made from balsa and cardboard, but painted to look like brick and lumber. And that’s only the beginning: a hidden wiring system lights up many of the buildings from the inside. Trees and other vegetation are represented by a combination of twisted wire and real greenery. Miniature people, wagons, and horses add realistic detail.

The crowning touch: snow covering the building and landscape, turning it into a winter wonderland. It’s not really snow, of course: Miller’s Marble Shop donates about 200 pounds of fine white marble dust each year to create the effect, Baucom says.

The original wooden Nativity scene closes out the tour in a dimly lit room, with lights showcasing different parts of the display, as a reading from the Gospel of Luke tells the story of Christ’s birth. Moore has volunteered since the early 1990s and has read from the Bible at the Nativity scene.

“I hope it is to the audience. It’s something that brought me peace and joy.”

Misc.: Cash or check, no cards are accepted.