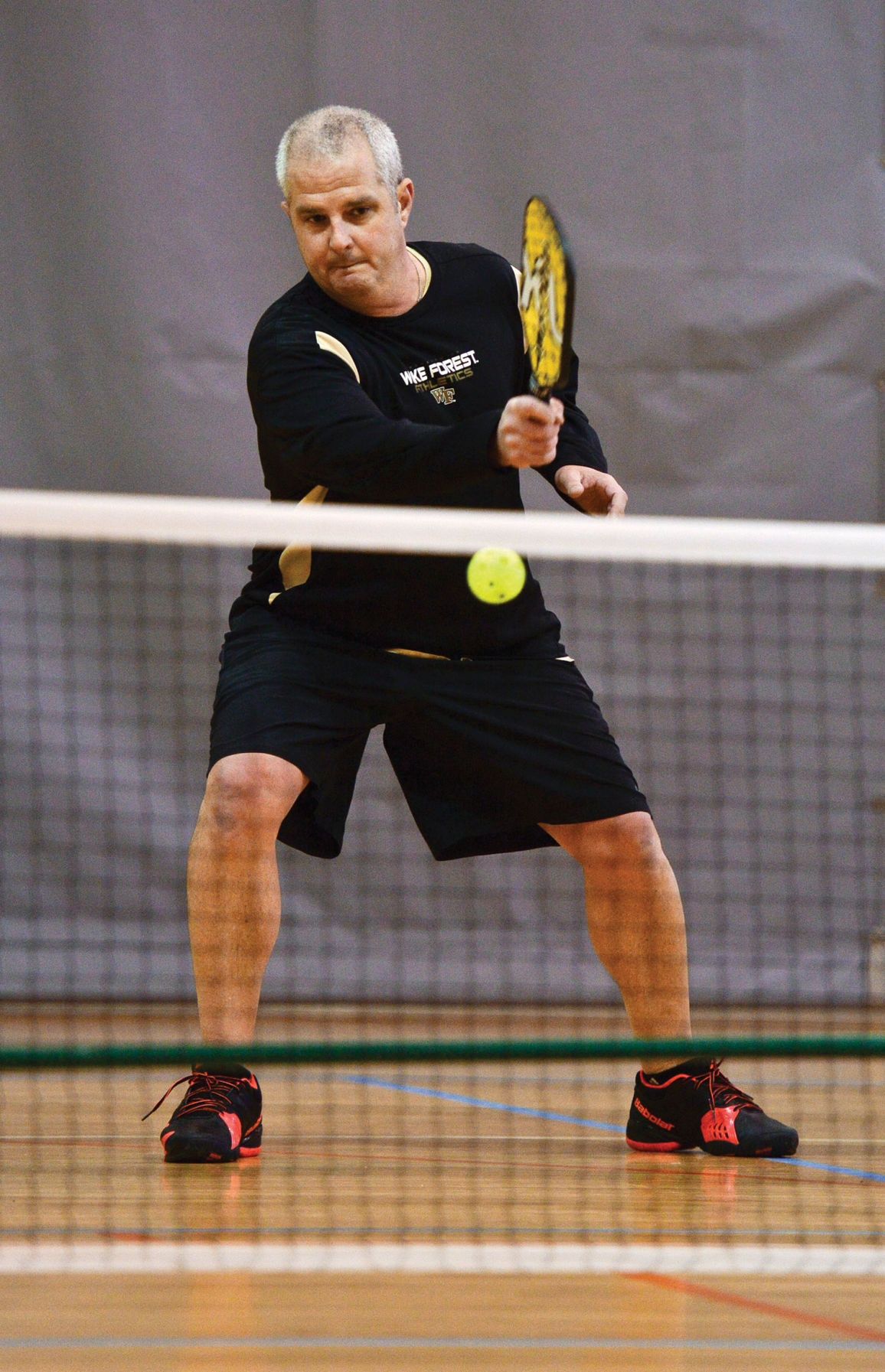 Marcus Luke returns a volley during a pickleball game. 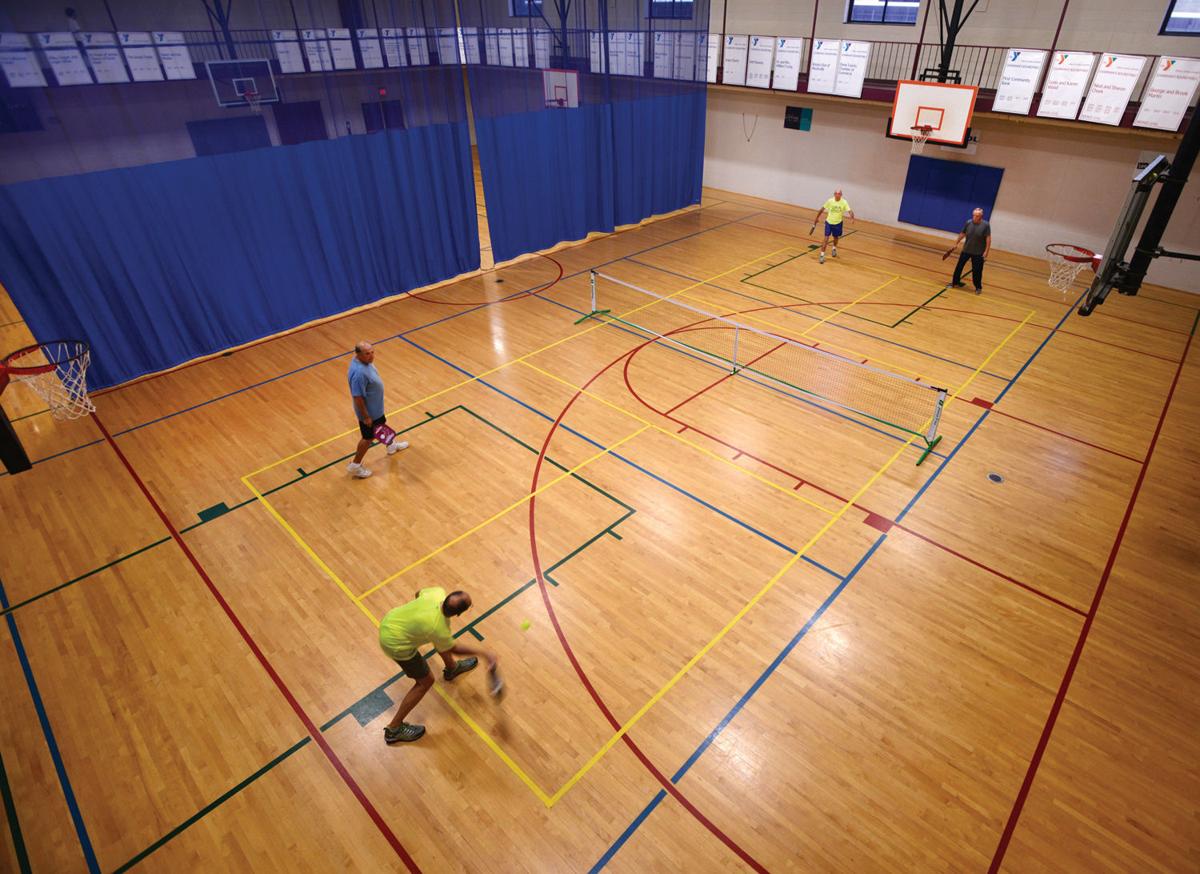 Mike Warchol, foreground, returns a volley as he plays pickleball with partner Ron Cox against Ted James and Mike Fahey. 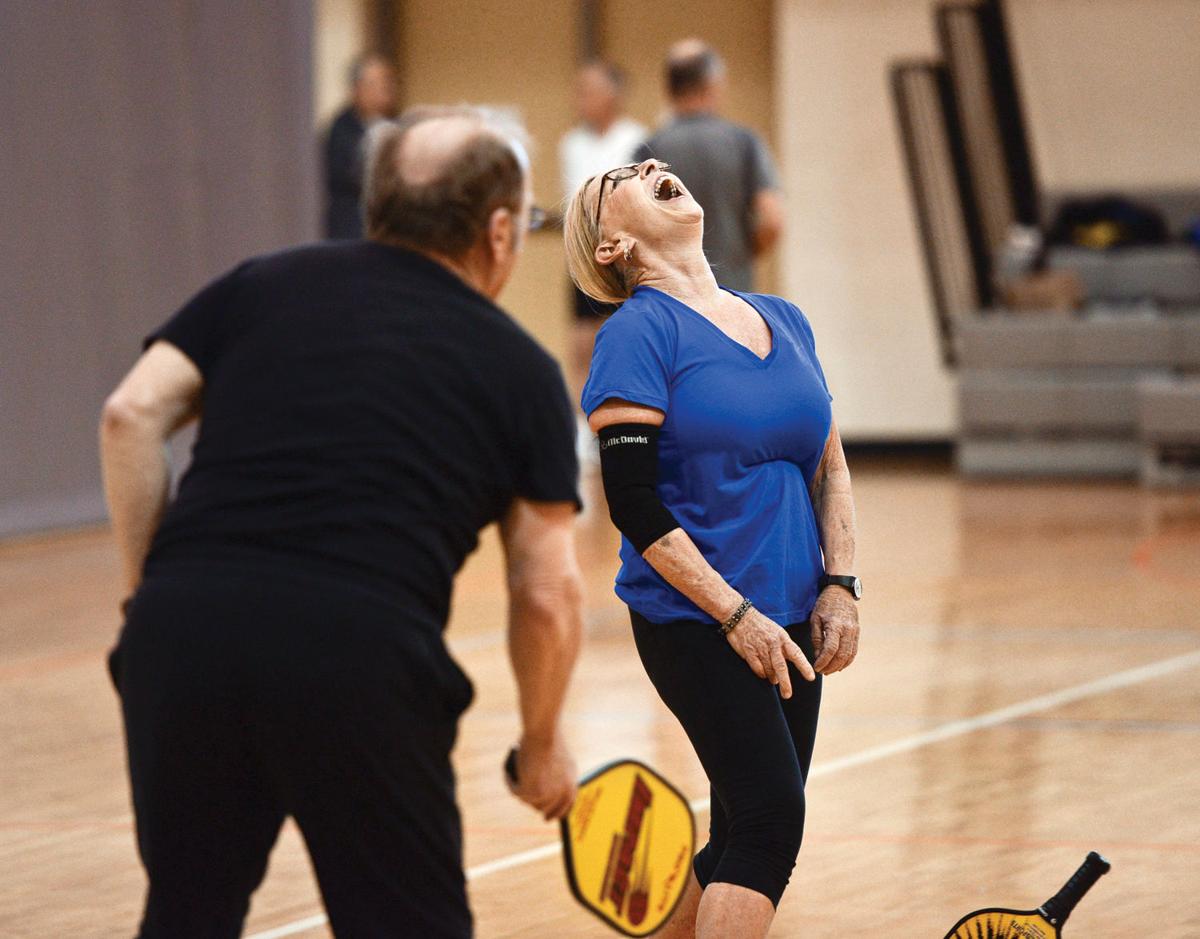 Playing partners Jack Smith and Phyllis Wagoner laugh at a bit of miscommunication during a pickleball game. 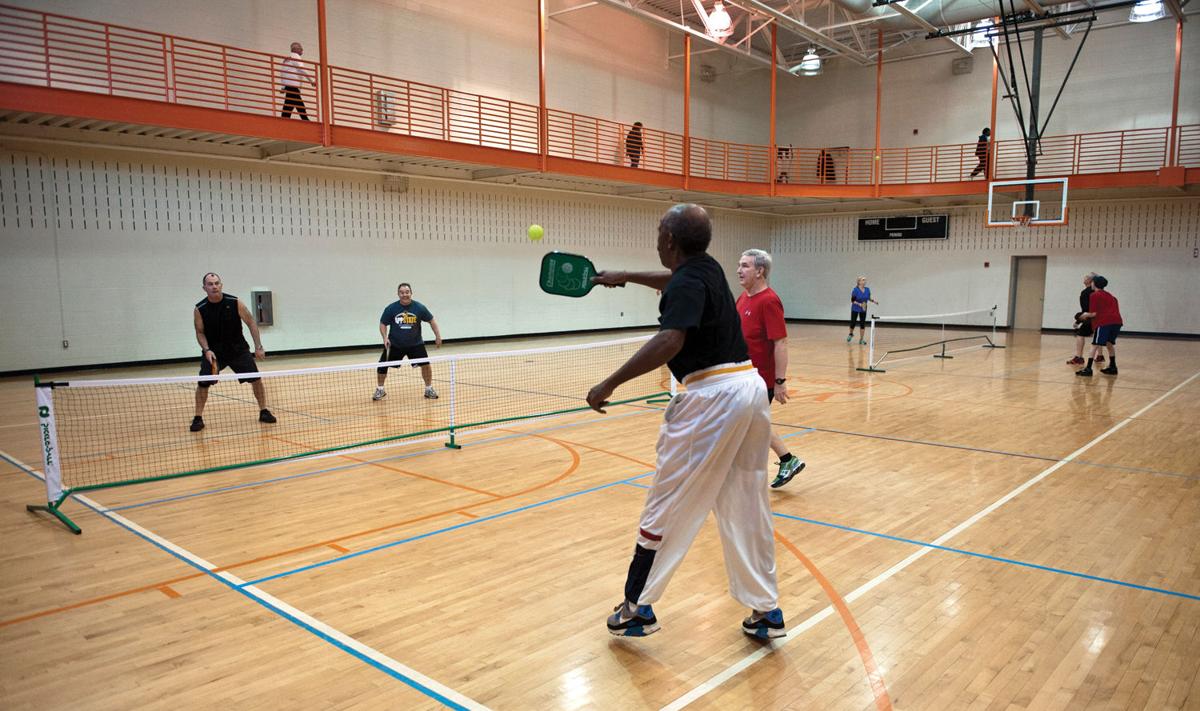 A player returns a serve during a game of pickleball.

Marcus Luke returns a volley during a pickleball game.

Mike Warchol, foreground, returns a volley as he plays pickleball with partner Ron Cox against Ted James and Mike Fahey.

Playing partners Jack Smith and Phyllis Wagoner laugh at a bit of miscommunication during a pickleball game.

A player returns a serve during a game of pickleball.

“It’s my favorite game in the world,” she says of the sport, a game that combines elements of tennis, pingpong, and badminton. “It’s a fun way to stay fit, and I love the people I play with.”

And while pickleball is often associated with seniors — it gained wide exposure after being added to the Senior Games in 2008 — it actually began as a children’s game on a Saturday afternoon in the 1960s.

It all started in the summer of 1965, when Washington state residents Joel Pritchard and William Bell returned to Pritchard’s home after a golf outing to find their families suffering from a case of summer boredom. They set up a badminton net but couldn’t find the shuttlecock. But no worries for this creative bunch. They substituted in a Wiffle ball and grabbed some pingpong paddles. To make it easier to volley the heavier ball, they lowered the net.

Neighbor Barney McCallum was eventually introduced to the activity. McCallum’s big contribution was the design of paddles specifically for the game — affectionately named M1 and M2 (“like naming an airplane,” McCallum joked in an interview in 2013). The M2 design stuck and is the basis for modern-day paddles.

The first players of the game weren’t content to leave it as it was, and they continued to develop rules and equipment to improve the experience. And in 1972, the wider world got the chance to hit the courts when McCallum incorporated Pickle-Ball Inc. Interest grew over the next decade, and pickleball gained official sports status in 1984 with the establishment of the USA Pickleball Association (USAPA) and the release of the first official rulebook.

Why do people love the game?

“It’s a pretty easy sport to pick up,” says Albert Noda, one of two Forsyth County ambassadors for the USAPA; the other is Laura Patterson. “If you play tennis or another racquet sport, you can pick it up even more quickly. Plus, it’s a lot of fun.”

Pickleball has found a foothold in the senior community for a variety of reasons. It’s a low-impact sport that’s easier on the body than other racquet sports. The court is smaller, so it’s easier to set up in a small area, and players don’t have to do as much running. The paddles are lightweight, and the ball is easier to see than, say, a tennis ball. It’s not an expensive sport to play, so the payback for what you invest is huge.

But probably one of the best parts of playing pickleball is the camaraderie.

Noda, a lifelong tennis player, took up the sport about a decade ago and has quickly forged close friendships with players up and down the East Coast. He’s a nationally certified referee and even sells equipment. His passion for the sport, and for how it can enhance everyday life, shows in his involvement. He plays and promotes pickleball throughout the entire Triad area and beyond, organizing tournaments and helping people learn how to get involved themselves.

So how do you get involved?

“Check the USAPA website to find an ambassador to help you get started,” Noda says. “You can find opportunities to play at places2play.org, which lists locations, contacts, how many players generally play, and at what level. It’s great when you’re traveling to help you meet other pickleball players no matter where you go.”

In Winston-Salem, there are a few spots to play. Stutts enjoys the close-knit group that plays at the Georgia Taylor Recreation Center.

“The exercise you get and the community are great,” she says. “Plus it’s really competitive. You want to win, so you learn your opponents’ strategies and work out how to win. It’s just a great sport for the body, the mind, and the spirit.”

And if you are the competitive type, you can visit pickleballtournaments.com to register for tournaments and build a nationwide rating for yourself.

“I think it’s only a matter of time before it’s played in the Olympics,” Stutts says.

Oh, and how did pickleball get its name? Well, it depends on whom you ask. It’s either named for the pickle boat in crew (a team made up of leftovers from the other boats) or it’s named for the Pritchards’ cocker spaniel, Pickles. Either way, it’s a great way to connect with others. And it’s fun to say.

Of course, pickleball play has been slowed significantly this spring due to precautions surrounding COVID-19, so it’s a good idea to follow public health guidelines and check with locations to see what the current situation is.

To learn more about pickleball, visit usapa.org, pickleballtournaments.com, or places2play.org.