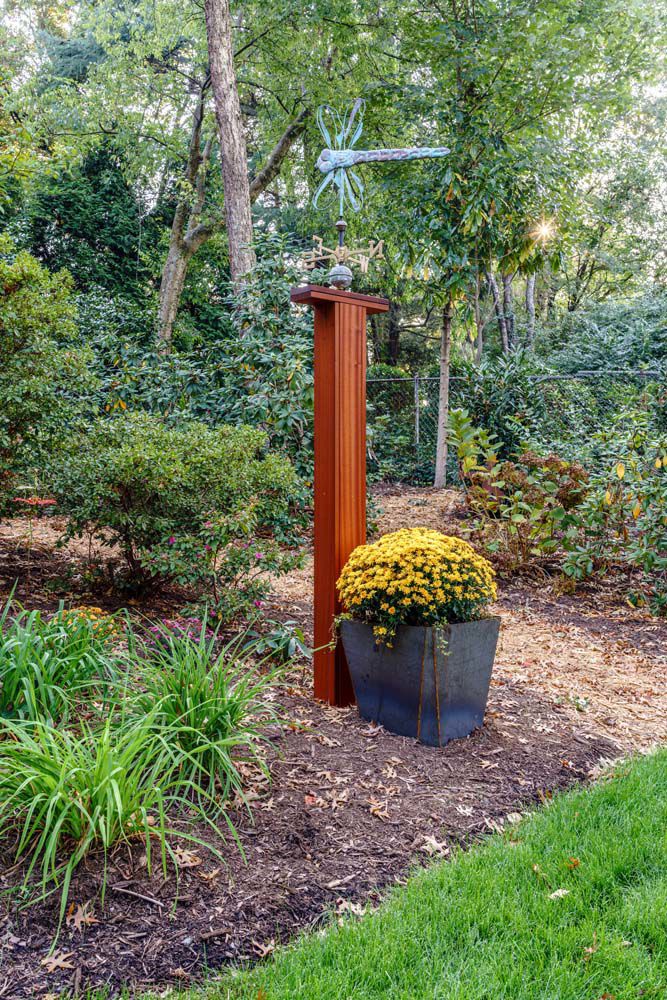 A copper-dragonfly weathervane was purchased from Copper Maiden Art in Washington state. 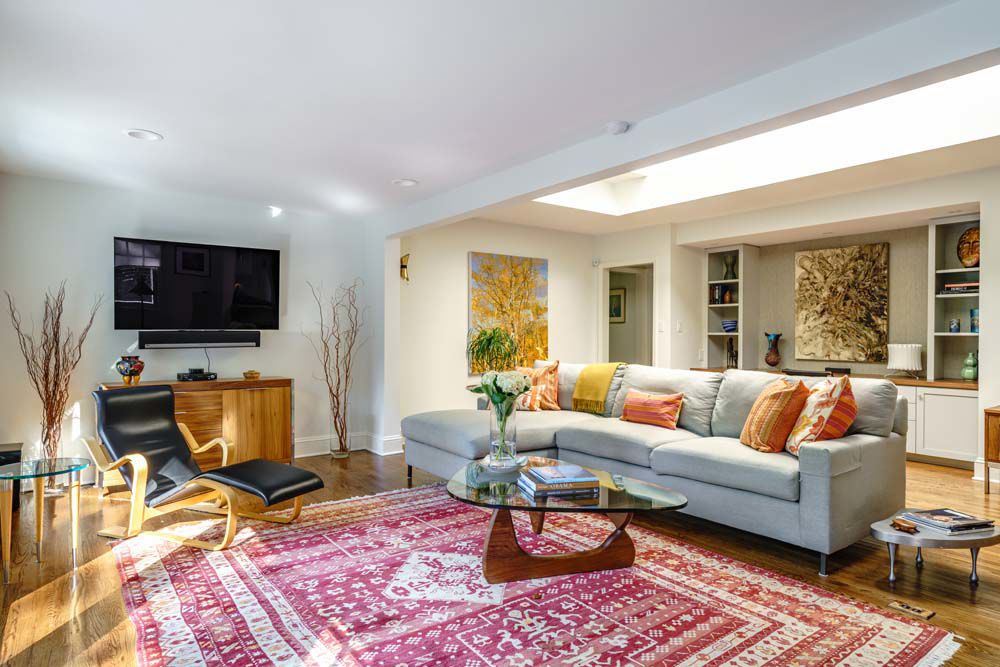 The family room, stocked with items from Trouvaille Home, looks out onto the patio and garden. 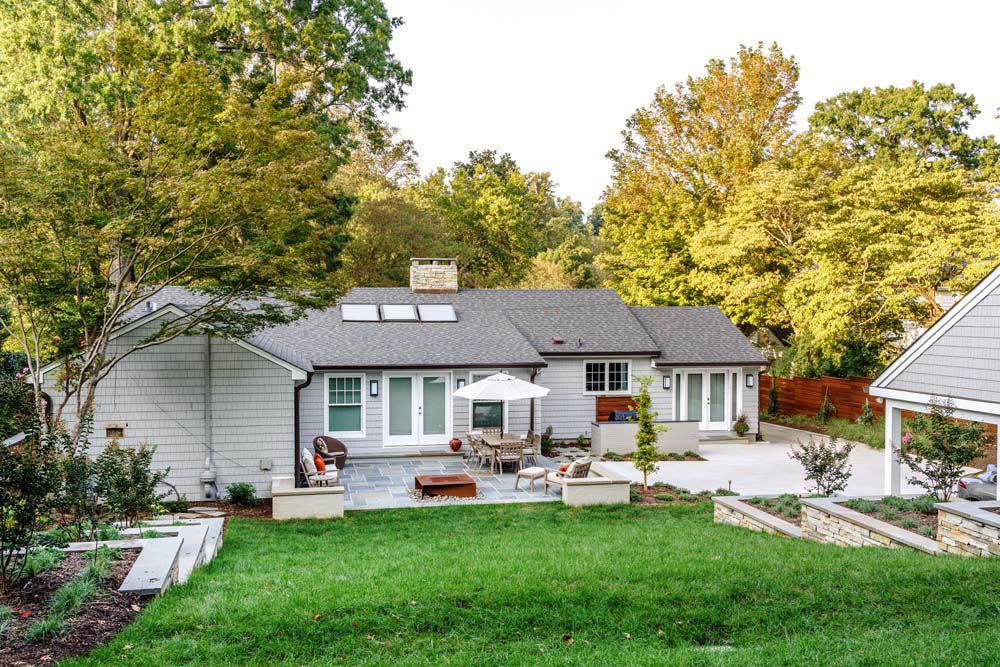 The patio was made with blue stone pavers and features a corten steel gas fire pit. 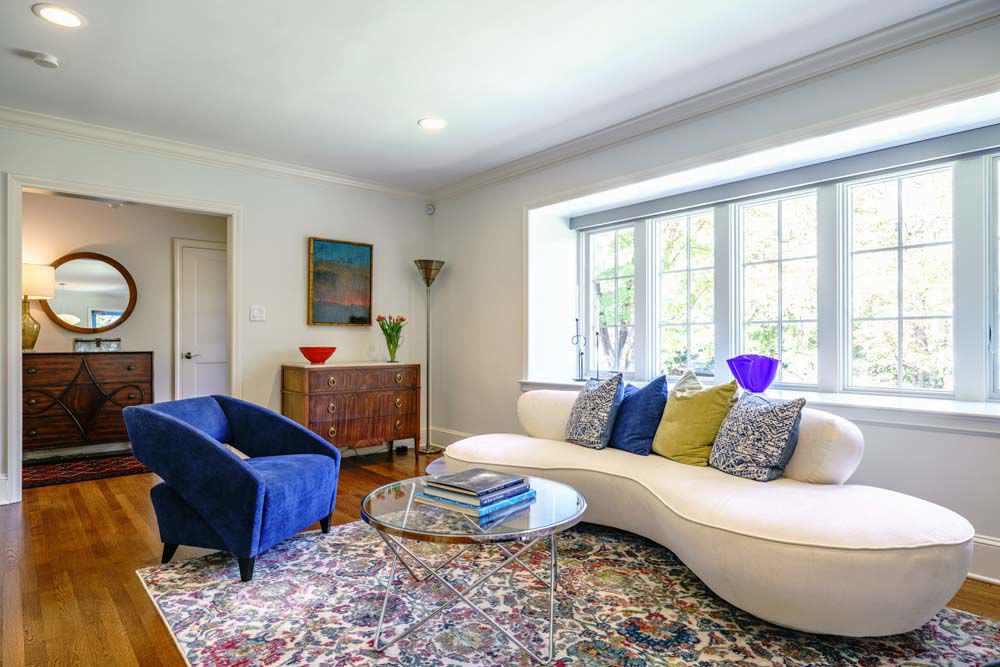 A large box window in the living brings in plenty of light and depth to the room. 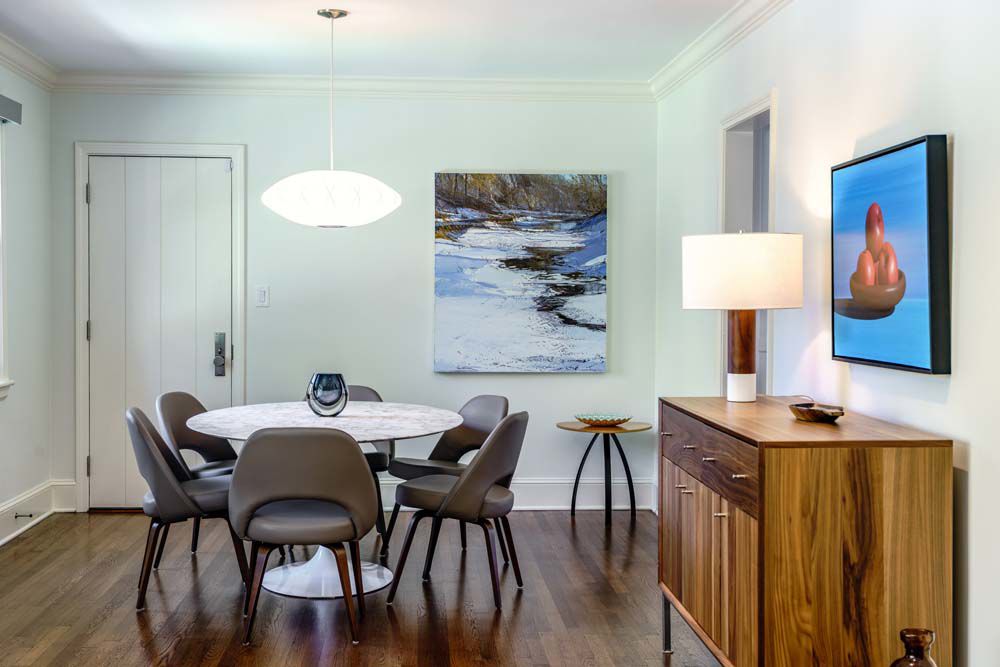 A Saarinen table and chair set modernizes the dining room. 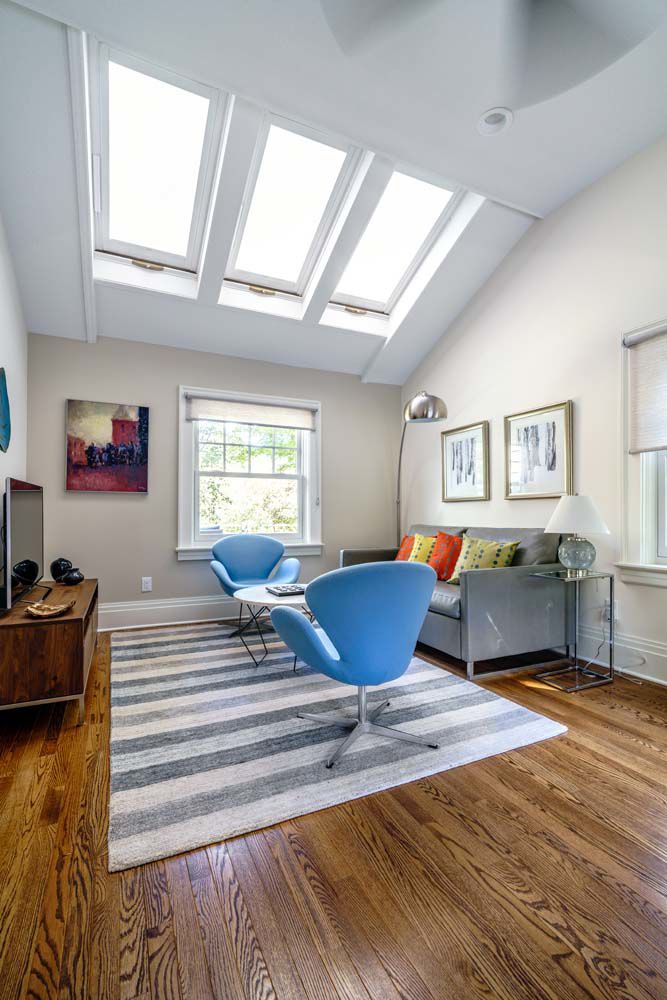 The sunroom is inviting with its cashmere and wool Swan chairs. 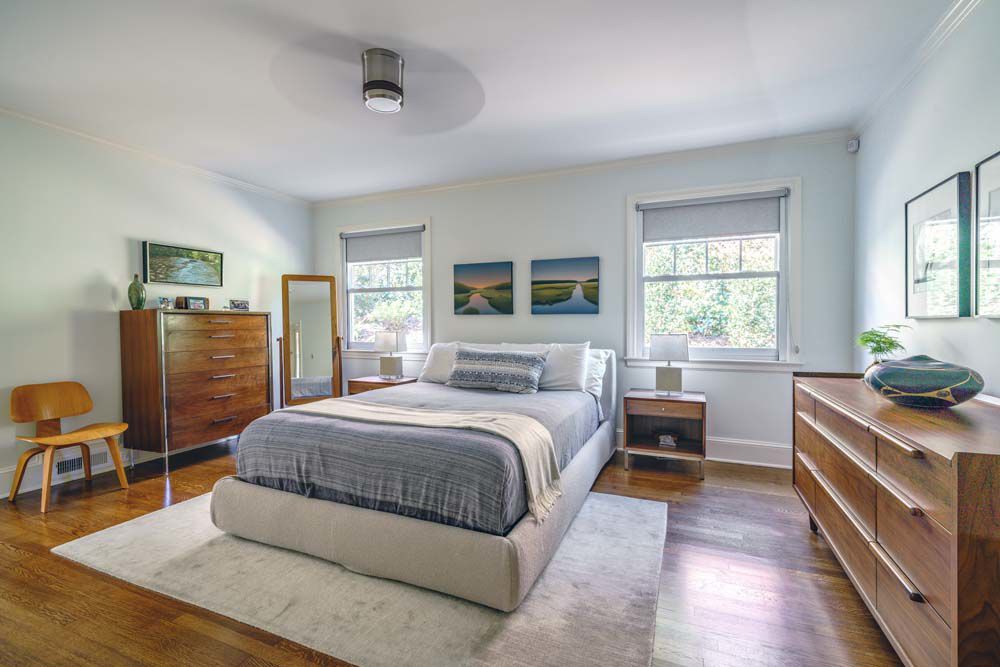 The master bedroom faces the home’s side garden. 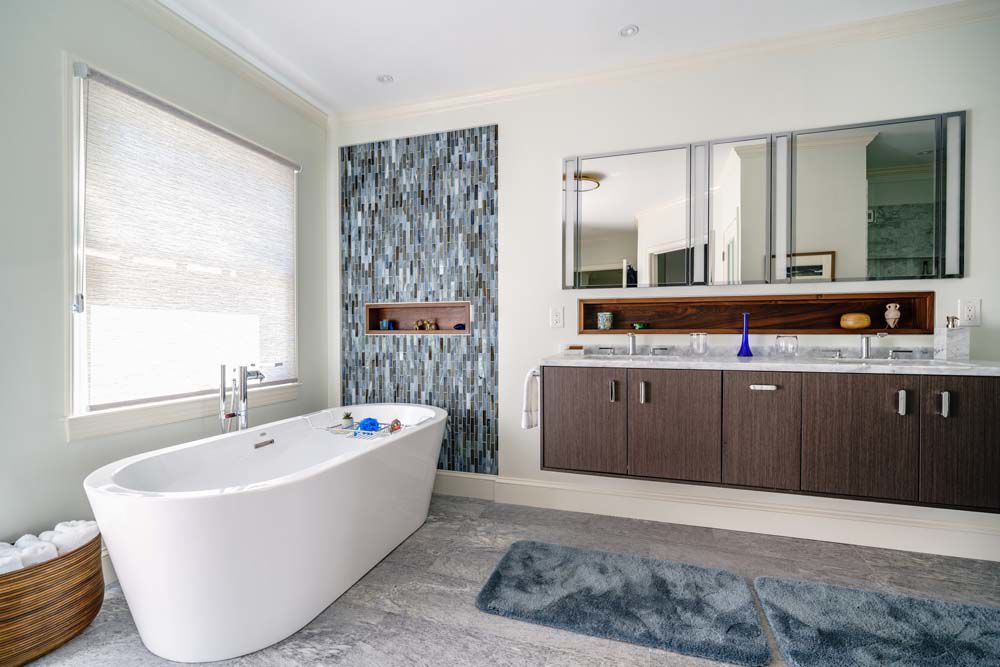 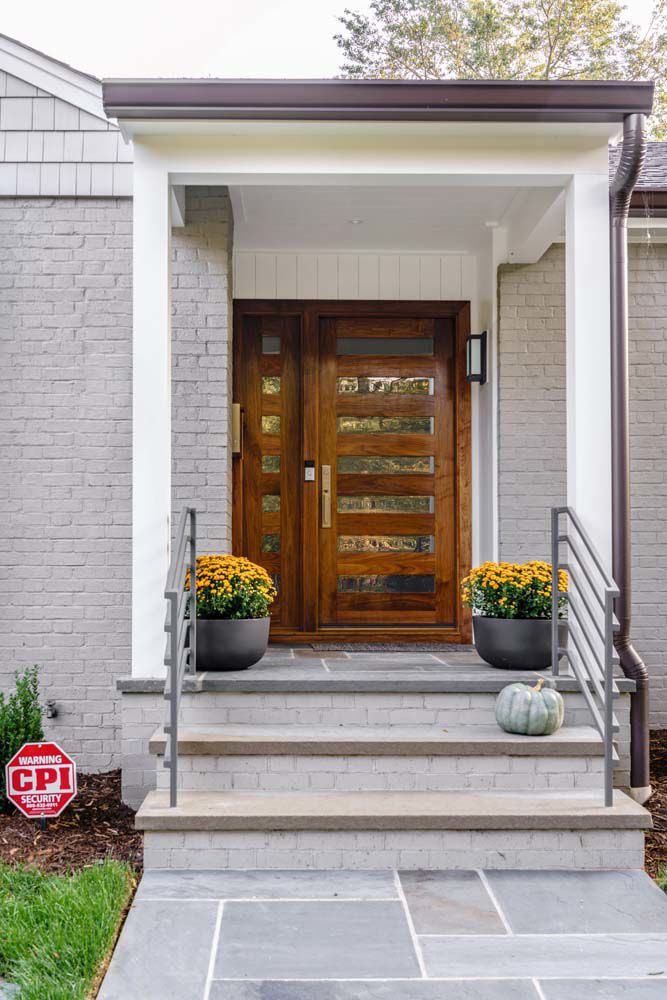 The custom walnut door was made in Oregon.

A copper-dragonfly weathervane was purchased from Copper Maiden Art in Washington state.

The family room, stocked with items from Trouvaille Home, looks out onto the patio and garden.

The patio was made with blue stone pavers and features a corten steel gas fire pit.

A large box window in the living brings in plenty of light and depth to the room.

A Saarinen table and chair set modernizes the dining room.

The sunroom is inviting with its cashmere and wool Swan chairs.

The master bedroom faces the home’s side garden.

The custom walnut door was made in Oregon.

Two years ago I sat down with Quinn Pillsworth for Winston-Salem Monthly’s annual “Designers We Love” profile. At the time, the architect was really excited about being asked to design a few modern homes. His “new-way-of-living” homes, as he described them, were “full of the things that humans like — openness, lots of light, natural materials, and a real connection to nature.”

One of those homes included the redesign of a midcentury ranch for his longtime friend Jim Bean and Jim’s partner Ron Waller.

Jim had moved back to Winston-Salem in 2017 to be close to his mother and was living in a three-level townhouse on Marshall Street near Old Salem. He had recently met Ron, and the idea that they might one day live together under the same roof made him rethink his current accommodations.

After months of searching, Jim finally found what he was looking for: “A home perfectly suited for one or two people, in desperate need of an update, in a park-like setting, with a beautiful backyard.”

With its single-level living and simple floor plan, the Buena Vista ranch made perfect sense for aging in place. Its location on one of Winston-Salem’s prettiest streets not far from downtown didn’t hurt, either.

But as plans to renovate got closer, Jim and Ron began to second guess a process traditionally fraught with the stress of the unknown.

To reno, or not to reno

For Jim, it wasn’t the first time he stared a major renovation in the face. He knew all too well the pressures that construction delays and ballooning costs could put on a relationship.

When he was younger and living in the Hollywood Hills above Los Angeles, he and a former partner had embarked on what would become a relatively high profile redesign. Working with renowned architect Frank Israel, a protégé of Frank Gehry, the two-plus year collaboration produced a home distinguished for its design and its use of unusual materials.

While Jim was thrilled with the results (the house was featured in over a dozen publications), he says “I swore that I would never renovate a house again,” citing among other things, the “time element” and the “unquantifiable expense” that were part and parcel of the process.

Nearly 30 years later, Jim and Ron wrestled over the decision whether to renovate or just buy new. They even went as far to make a second offer on a brand new home that promised lower maintenance expenses.

“After torturing our real estate agent, our architect, and ourselves, we finally decided to stay committed to this home whatever the consequences,” Jim says.

So began what seemed like an endless merry-go-round of meetings with their architect, landscape designer, and contractor; the dozens of decisions concerning bathroom fixtures, tile samples, stone samples, and paint chip choices; what to leave in, what to take out.

Undaunted, Jim and Ron moved in together and endured the “come-what-may” process of remodeling — right up until the bathrooms were torn out. At that point, they decided a temporary stay at Jim’s mother’s house was their best move before returning to the dust and debris of their new home.

When the dust did settle, it was clear that Jim and Ron had done more than just survive. With the help of a talented team of designers and builders, they have created their own personal magnum opus of sorts — a home they can now leisurely sit back and marvel at.

In the end, Jim and Ron’s decision not to increase the footprint of the house (with the exception of adding a carport out back) allowed it to maintain a certain charm and modesty. Instead, working with landscape architect Dustin Swain of Site Lines Landscape Design, they invested in the home’s surrounding landscape, which can be appreciated from every room. It was a quality of life decision that keeps them connected to the outside world and helps the home live much larger than it actually is.

As for working with friend and architect Quinn Pillsworth, Jim and Ron’s contractor, Brent Adams, persevered through all the weather challenges that threatened to delay the project and made sure to bring Pillsworth’s designs and attention to detail to life.