Abe’s antiquated patina matched up against the Winston-Salem skyline provides an interesting composition. 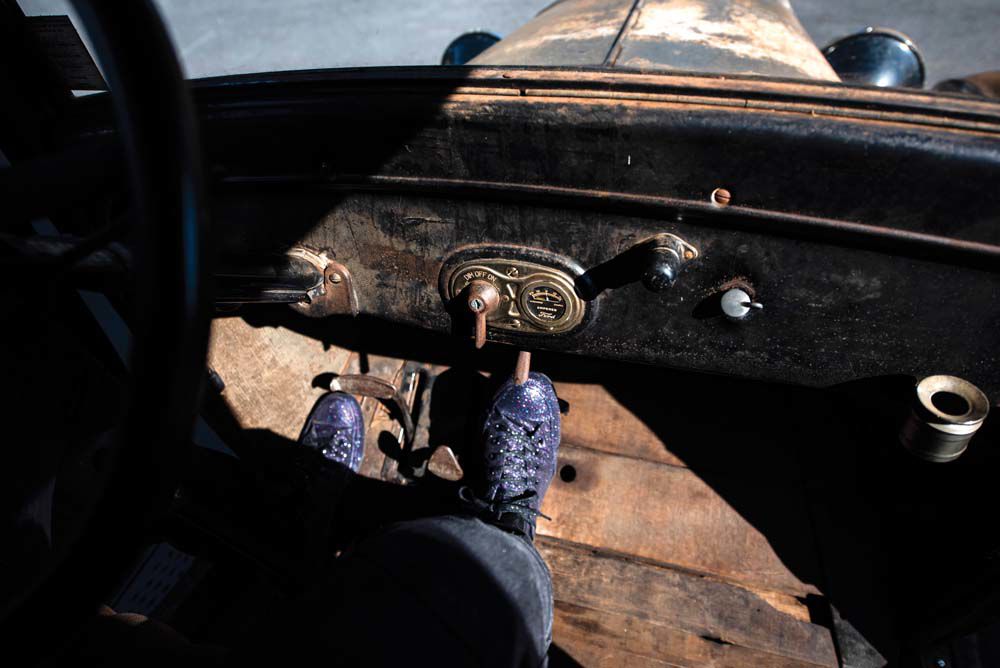 Model Ts have three foot pedals, but not one of them is used to accelerate. 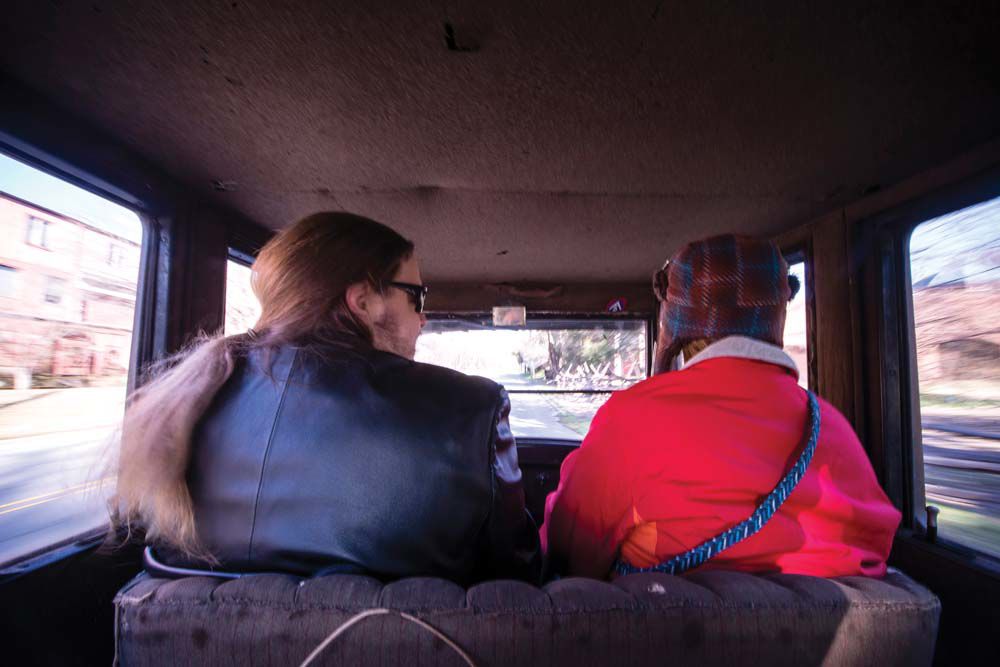 Riding inside a 1926 Model T is a little bit of a snug ride. 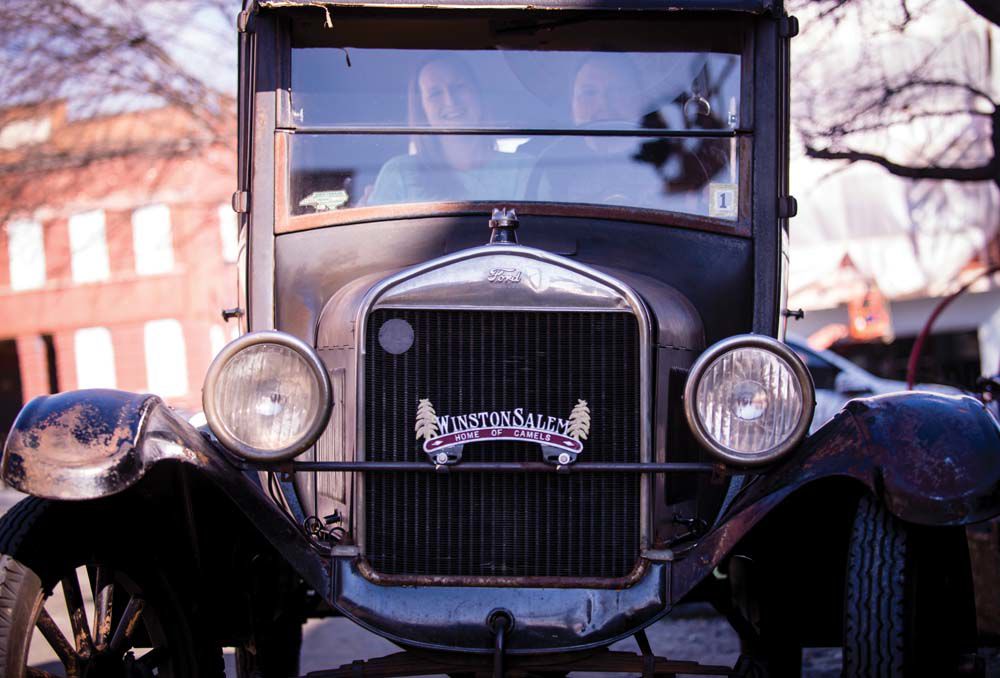 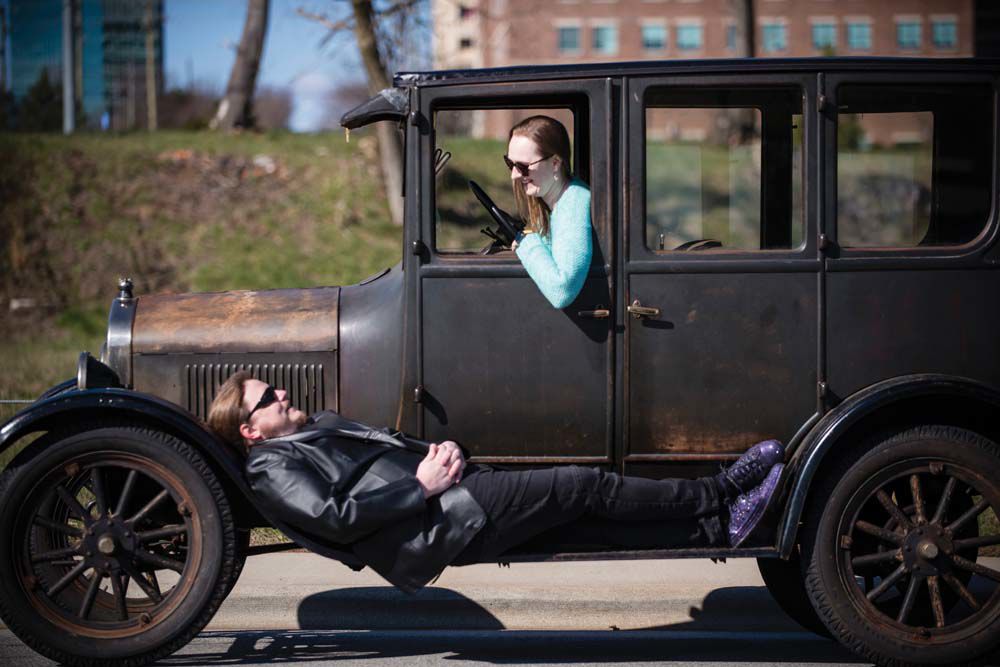 Darren Overcash and his wife, Laura, get comfy on their 1926 Ford Model T, affectionately known as Abe.

Abe’s antiquated patina matched up against the Winston-Salem skyline provides an interesting composition.

Model Ts have three foot pedals, but not one of them is used to accelerate.

Riding inside a 1926 Model T is a little bit of a snug ride.

Darren Overcash and his wife, Laura, get comfy on their 1926 Ford Model T, affectionately known as Abe.

At 94 years old, Abe can do everything he needs to do, says Darren Overcash — except go fast.

But he can get up to about 40 mph (Darren isn’t sure, as Abe doesn’t have a speedometer), good enough for a leisurely, if not rickety ride through the countryside.

Abe is a 1926 Ford Model T with a four-cylinder 20-horsepower flathead engine. He’s got a bit of rust and some cracked paint, and is unlikely to get cast for a “Fast and the Furious” movie. But this piece of technology produced in the era of the flapper continues to garner plenty of attention today.

“It’s fun going somewhere and seeing all the people flocking to it,” Darren says. “It takes you 45 minutes to get gas because everybody wants to talk to you about it.”

Darren, who works as an accountant and plays bass for several local bands, acquired Abe four years ago, and has tried to retain as much of the car’s original character as possible. About the only concession he’s made to modernity is a pair of magnetic flashers on the back. The car still has its original upholstery, original paint, and original carriage-style wheels with their wooden spokes. Darren even has a set of antique tools that he found in the back.

“People ask, ‘When are you going to restore it?’” he says. “But I like showing off that patina, that original ingenuity. And so far, it’s been solid.”

Needle in a haystack

In 2016, Darren’s father-in-law inherited the estate of a friend. Among the man’s possessions were several cars, including the Model T. The vehicle had been sitting outdoors under black plastic on a property in Winston-Salem’s Ardmore neighborhood for about five years. When Darren saw a picture of the car, he fell in love with it almost right away, and began doing some research so he could make an offer to buy it.

But first, he had to locate the keys and title.

“It was a needle in a haystack situation,” says Darren’s wife Laura, a local blogger and marketing director. “We knew it had to be there somewhere because my dad’s friend, he was one of those people who kept everything. After my dad inherited the estate, we as a family helped him clean it up. My mom took a lot of the paperwork that was in the house. She would put it in boxes, take it home, and go through it at the kitchen table. So, it was there. It was just hidden.”

Once Darren took the car home, he had the radiator and gas tank flushed, rebuilt the carburetor, put in new wiring, and replaced the tires. They had the car up and running within about three weeks, and Darren thought it looked sort of like a top hat. He’s also a fan of Abraham Lincoln, so he bestowed the name Abe on the vehicle.

The car, he believes, would have been one of the first sold at the showroom of Twin City Motor Company on North Liberty Street, which opened in 1926. Abe, who has a metal plaque on his grille with the old dealership’s name on it, recently went there for a photo shoot.

“We backed him on to the old car elevator,” Darren says. “He was maybe one of the first cars in that elevator, and will probably be the last.”

Car for the common person

Henry Ford introduced the Model T in 1908. The car revolutionized the automotive industry, transforming it from one that catered to the elite to one that did business with the masses. About 15 million Model Ts were manufactured during a nearly 20-year production run.

“Henry Ford’s goal was to build a car that was affordable for the common person,” says Larry Azevedo, who lives in New Mexico and is president of the Model T Ford Club of America. “He wanted anyone who worked in his factory to be able to afford a Model T. It started out at around $850, but continually dropped in price until the 1920s when you could get one for about $275. The profit margins were low, and Ford was also pushing for efficiencies so he could sell more.”

The exact number of Model Ts left on the road is unknown, but Azevedo estimates that about 30,000 to 40,000 in various conditions are still around.

“It’s a simple car,” he says. “The engine and transmission run on the same oil. There’s no oil pump, no water pump. When something went wrong, it didn’t take long to diagnose. At the time, it was also state of the art in terms of accuracy for parts. Some people might make a few small modifications, play around with the timing, increase the breathing; change the carburetor, things to improve the performance. But someone who just knows a few basic mechanical details can learn how to maintain it easily.”

Parts are also still fairly easy to find on the internet.

“You can actually get new axles, bearings, suspension parts, crank shafts,” Azevedo says. “There are only a small handful of things that you can’t get from commercial vendors. And usually you can find those few things at swap meets.”

“They’ll walk you through a lot of troubleshooting stuff,” he says. “They’ll say, ‘Try this, try this.’ But they want to keep this knowledge going, otherwise it would just fade away.”

To get behind the wheel of a Model T, Darren says, “you have to forget everything you know about driving.”

For one, the car doesn’t have a gas pedal. To propel the car forward, one moves a little lever on the steering wheel. The car does have three foot pedals, though. On the far right is the brake. The middle pedal makes the car go in reverse. And the one on the left changes gears.

Darren always tries to keep the gas tank full, as Abe has no gas gauge. In fact the console only has one gauge, which measures amps. If he and Laura want to figure how fast they’re going, they’ll sometimes use their phones.

When they go somewhere, they stick to city streets and country roads, as the car would be unable to keep up with traffic on the freeways.

The car is narrower than many modern vehicles, and the front seat is a snug fit for two people. When the engine comes to life it sounds like an overpowered lawnmower.

On the road, other drivers honk and give him the thumbs up. Some people pull out their phones and take a picture.

On a recent Saturday, Darren drove to the old yellow Shell Station on Sprague Street, where Mary Wakeford and Steven Dunn were taking some photos. They immediately walked over and began asking questions. He let them have a look inside the car and told them Abe probably came here back when it was a functioning gas station.

The vehicle, Darren says, draws many admirers whenever he goes to a car show or cruise-in. If the city ever has an official ribbon-cutting for the recently reopened Salem Parkway, he hopes Abe will be asked to take part.

“Since it’s a Winston-Salem car and it’s been here for more than 90 years, I think it’d be cool to get the mayor to ride with me,” he says. “Also, that would probably be the only opportunity I’d ever have to drive it on an interstate."