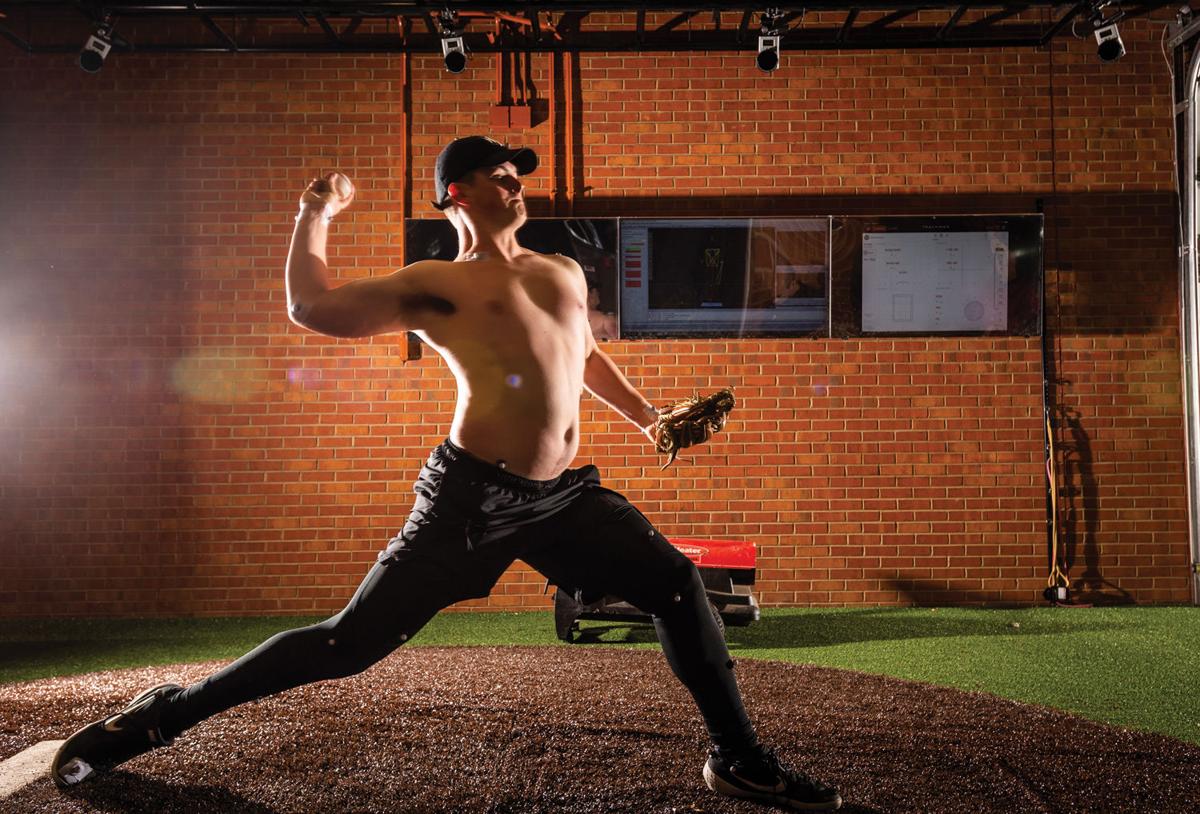 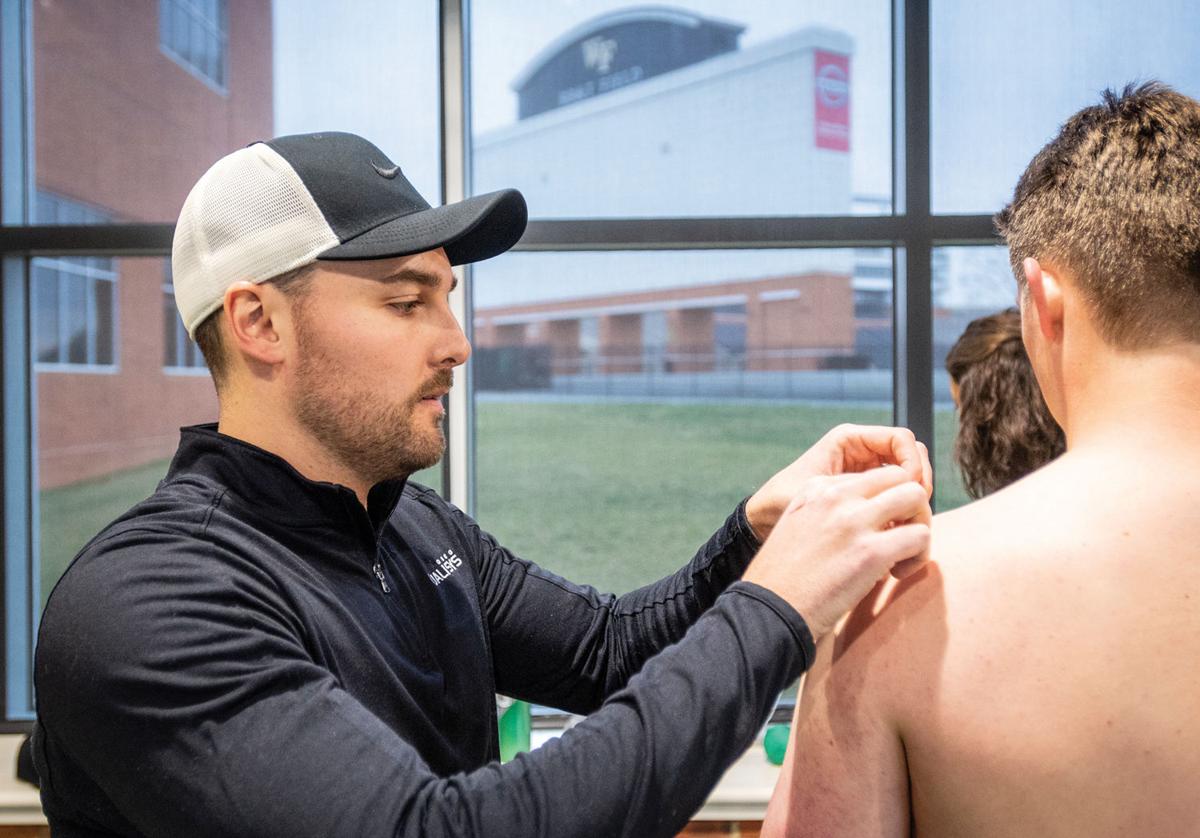 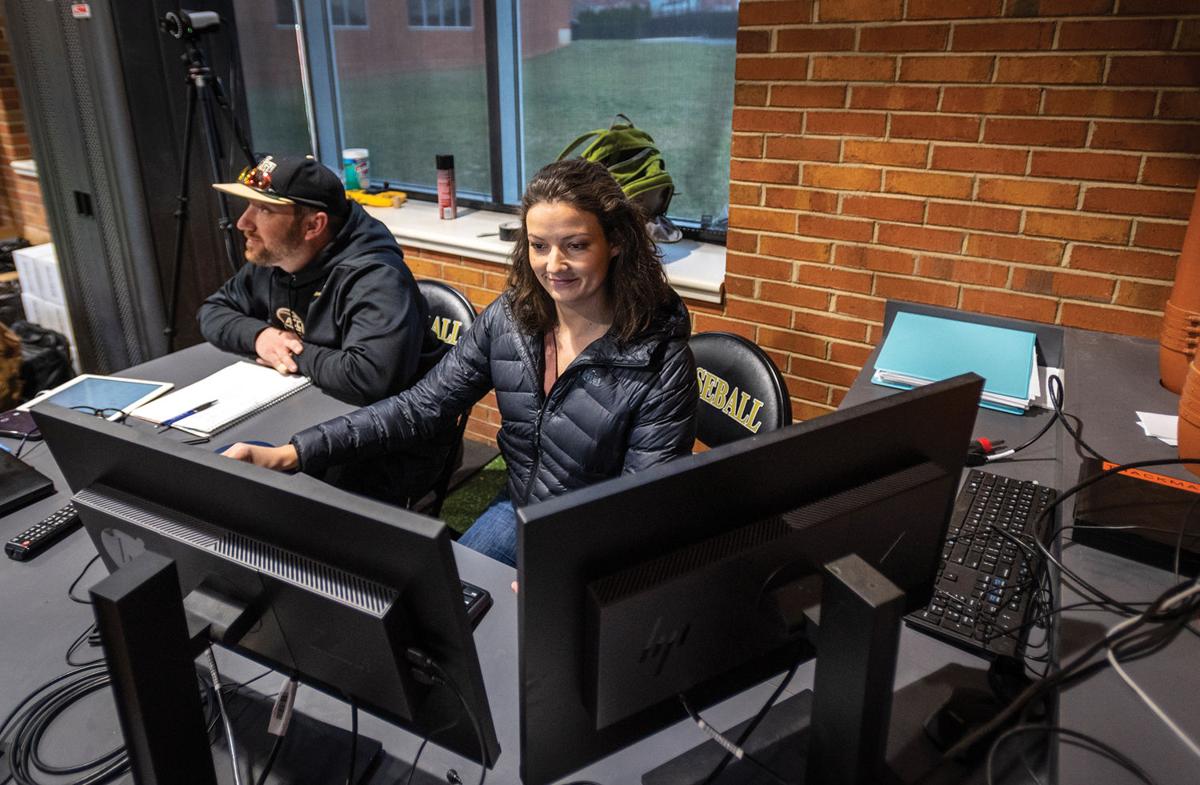 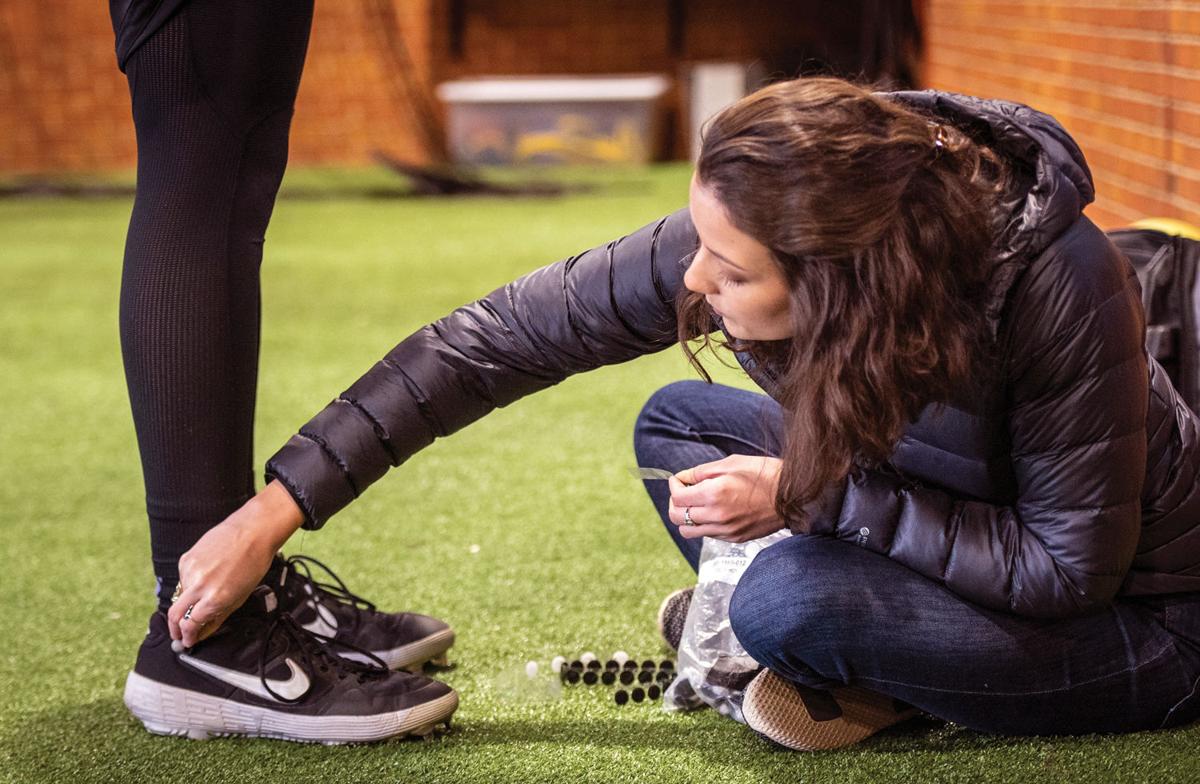 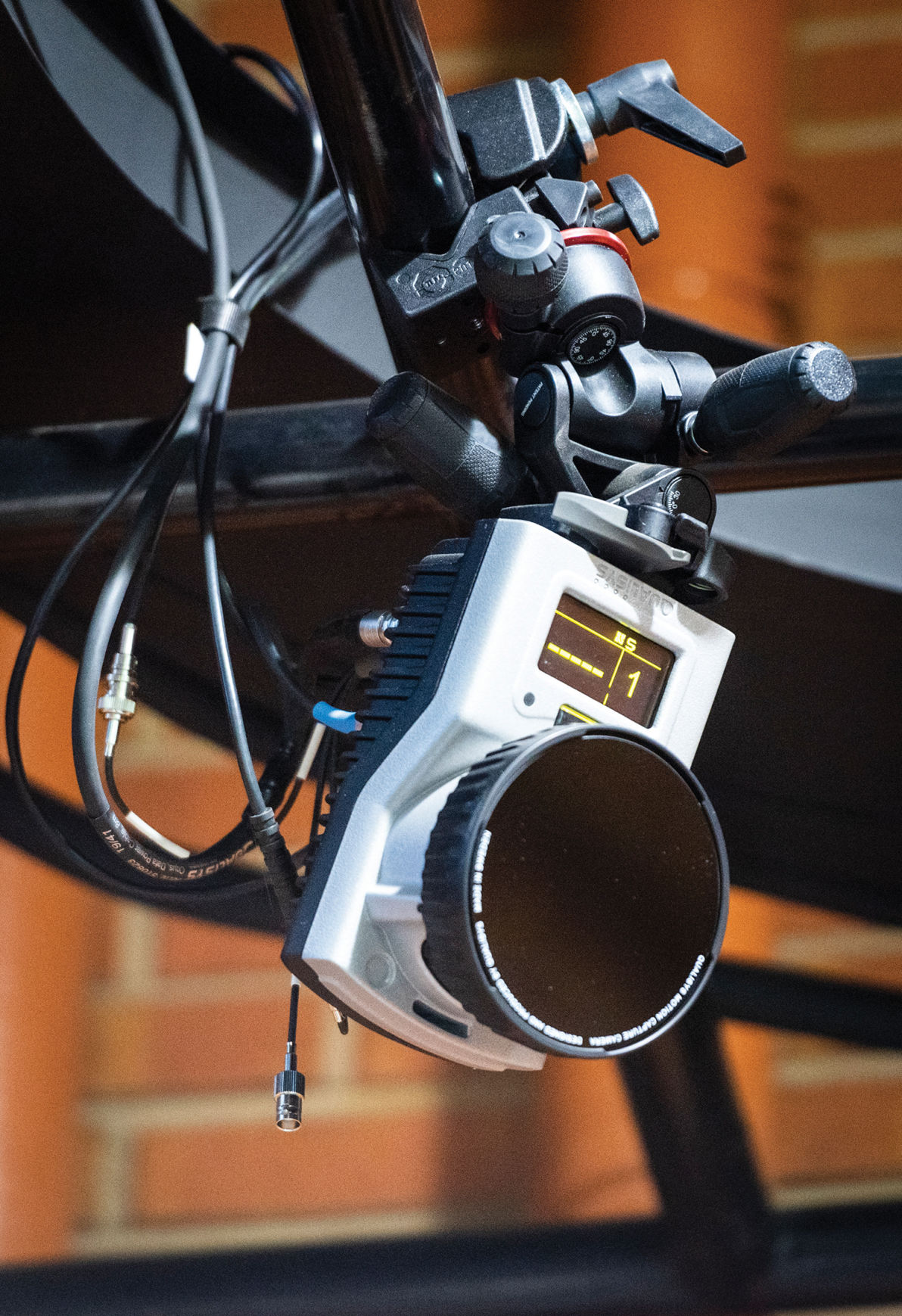 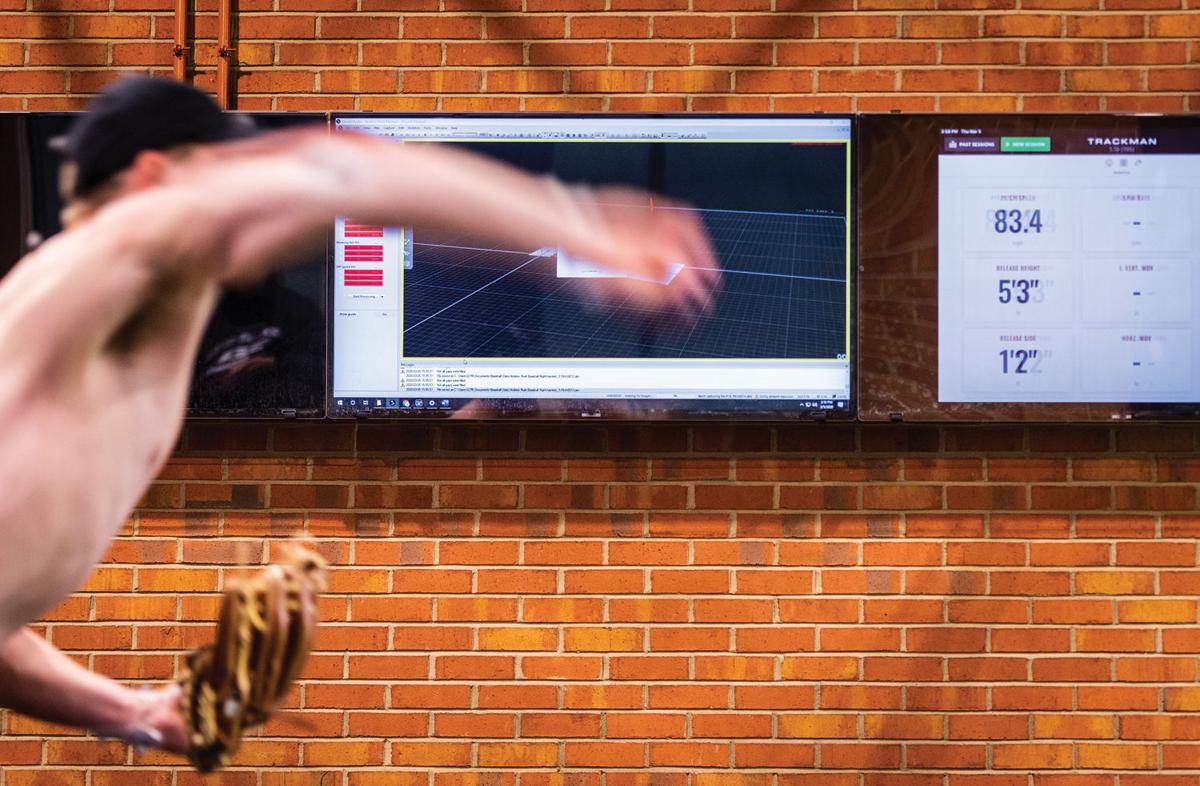 In late February, Wake Forest University sophomore pitcher Andrew Rust reported to a small garage-like room next to the home team’s bullpen at David F. Couch Ballpark. From the outside, it didn’t look like much, but inside, this space was — and is — the headquarters for a new revolution in pitching.

Welcome to the Wake Forest Pitching Lab, which opened in October 2018 as one of only a few facilities like it in the entire country. Actually, there is no other facility exactly like it. It’s the only pitching lab fully integrated with a major teaching hospital (Wake Forest Baptist Health) and it has an on-site location at the college team’s stadium. The lab is on the ground floor of the $12 million player development center at the ballpark.

“It’s also the only one being used on a daily basis by a college pitching staff,” says John Hendricks, who took the Deacons’ pitching coach job in December 2018 in part because of the pitching lab. “It’s not built like the one in Seattle, to train kids, or the one in Alabama, to study the science of rehab and injury prevention. We’re the first to use it to win more games and improve our ERA.”

Those desired results will take a few years. In its first season using the lab, Wake had the highest team earned run average (ERA) at 5.89 and the most wild pitches (76) in the ACC. The Deacons pitching staff was on track to improve those numbers this year before the COVID-19 pandemic ended the 2020 season.

Dr. Kristen Nicholson, who runs the lab, says Rust and his teammates get five evaluations a year. After the initial session, lab coordinator Evan Wise studies the data and creates a training program of exercises and drills for each pitcher based on that evaluation. The rest of the sessions mark progress, and help Wise tweak the training program if needed.

Up to that point, challenges with his command had kept Rust in the dugout all season. The purpose of his evaluation in February was mainly to see how data-driven adjustments to his delivery were helping to tame the power breaking ball that made him an ace in high school.

“The focus of my training so far has been to try to move better so that the command will take care of itself,” says the right-hander. “From what we’ve seen, I’ve moved a lot better and some of that is due to the lab we have here.”

Wake Forest student Tessa Holbert, who assists Nicholson with motion capture collections, attached reflective sensors all over Rust’s arms, shoulders, torso, and legs before his February evaluation. The sensors are picked up by 12 motion-capture cameras mounted to the ceiling.

“I’m studying engineering, so I love the data,” says Rust, who graduated from the North Carolina School of Science and Mathematics and chose to pitch at Wake over Princeton, Harvard, Cornell, Davidson, MIT, and Duke partly because of the lab. “I came here with the understanding that I needed to evolve as a pitcher and what worked for me in high school probably wouldn’t work at this level.”

Hendricks says Rust’s attitude is common. Everyone on the current Wake pitching staff joined the program knowing the lab would be part of their development. The lab continues to be a vital recruiting tool for Wake Forest head baseball coach Tom Walter.

“Every recruit we talk to about pitching here either knows about it and wants to be part of it,” says Hendricks, “or once we talk to them and tell them to do some digging on their own, our next conversation is really at a different level.”

In other words, those players and their parents want to come and see the lab for themselves. Many others do, too. Representatives from other college programs, Major League Baseball team personnel, and the heads of private pitching schools have stopped in to see what Nicholson and her team do. Rust had an audience for his session in February. In all, he threw about 20 pitches, with Hendricks calling out pitch types and game situations before each one.

Between pitches, Holbert, Hendricks, and Rust studied a large flat screen TV mounted on the opposite wall, displaying readings from the motion-capture cameras mapping Rust’s body. On the screen, he appears as sort of a geometric stick figure that moves whenever he moves. With every pitch, new data spills into boxes in the corner of the screen showing everything from pitch velocity and movement to body and arm angle. It’s like a scene from the HBO show “Westworld.”

The future of injuries

While Hendricks views this data from a performance perspective, Nicholson, who is also an assistant professor in orthopedic surgery at Wake Forest Baptist Health, is focused on something else.

The question for Nicholson and her team is how, and whether there are consistent methods that can be translated into programs all pitchers can follow to avoid injury. Anyone who watches baseball even a little knows how big a deal such a discovery could be.

According to a 2017 Hardball Times story by Society for American Baseball Research member Josh Roegele, 86.7 percent of regular season MLB games played featured at least one pitcher who had previously undergone Tommy John surgery (a procedure where a tendon from the forearm is used in the elbow). Even worse, the American Orthopaedic Society for Sports Medicine found that kids aged 15 to 19 accounted for 57 percent of Tommy John surgeries performed in the United States between 2007 and 2011.

“I think there are some protective mechanics some of the most successful pitchers are implementing,” Nicholson says. “We’re not quite there yet, but hopefully with the data this state-of-the-art lab gives us, we can figure out what those mechanics are and eliminate shoulder and elbow injuries.”

Data from the lab has already saved several Wake pitchers from almost certain injury. Rust is one of them. Nicholson and her team saw high elbow and shoulder stress in his pitching motion after his very first evaluation last year.

“Had I gone anywhere else to pitch, I’d have just kept going the way I was,” Rust says. “It was pretty inevitable I would’ve had an arm injury. But I changed my throwing program and made some mechanical adjustments to take some stress off my elbow and shoulder. A few months later we did another motion capture and saw that the torque on the elbow and the shoulder stress went down a lot. I think it made me a lot healthier.”

And so, this past February, he threw in his lab evaluation with no pain. An added bonus? Hendricks thought Rust’s new mechanics were starting to work. By this time next season, he could be a pitching star once more.

As Rust plucked the sensors from his body before joining his teammates for afternoon practice, Hendricks studied the readouts on the flat-screen TVs and marveled at the changes baseball has gone through in just a few short years. Before joining the Wake coaching staff, he was an amateur scout for the New York Mets and could see these changes coming. Now, he has a pretty good idea what baseball will look like in the next few years.

“I truly believe that 10 years from now there will be all types of pitching labs, maybe not in the thousands, but scattered all over the country,” he says. “Some will be as high-end and fancy as ours and some will be lower-end and won’t collect data the same way. But a decade from now doing these kinds of evaluations will be normal for pitchers everywhere.”

Hopefully, so will injury-free pitchers. They’ll have the Wake Forest Pitching Lab to thank for their good health.