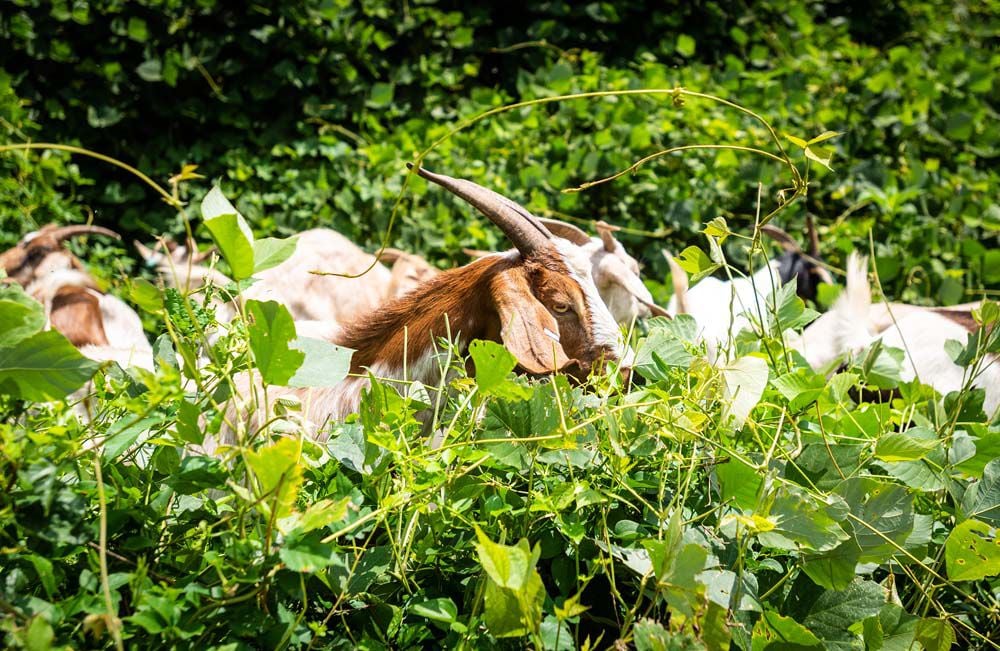 Goats from Wells Farm Goats clear Kudzu and other vegetation at the Salem Creek Greenway. 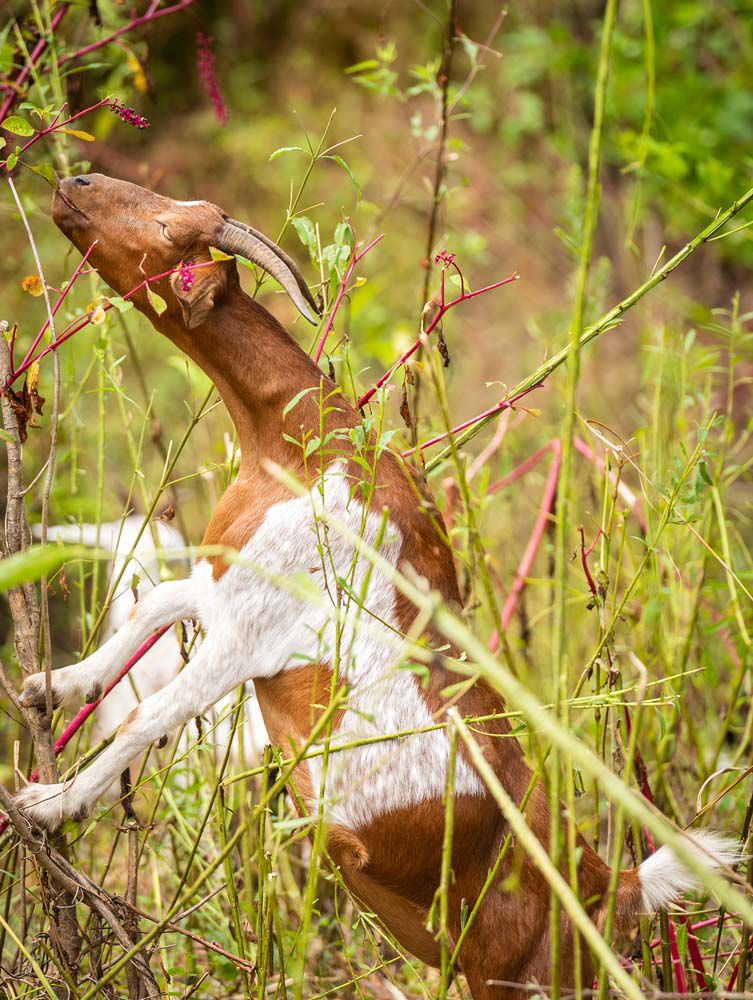 A goat from Wells Farm Goats clears Kudzu and other vegetation at the Salem Creek Greenway. 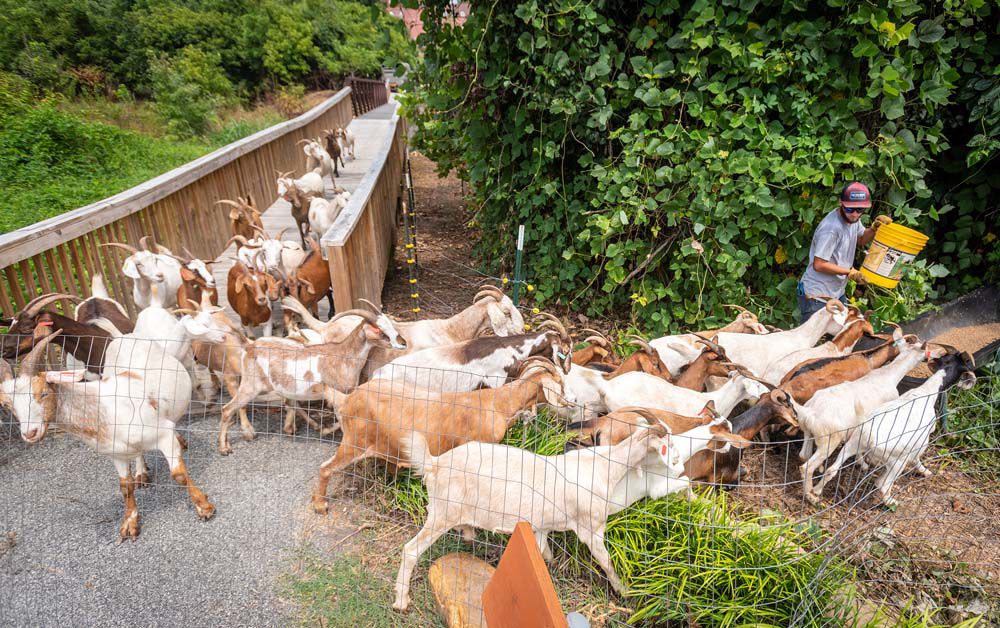 Jake Dorner, manager of Wells Farm Goats, leads his goats from one paddock to another along the Salem Creek Greenway on Friday, Aug. 2, 2019. The goats are helping clear unsightly kudzu from the greenway. 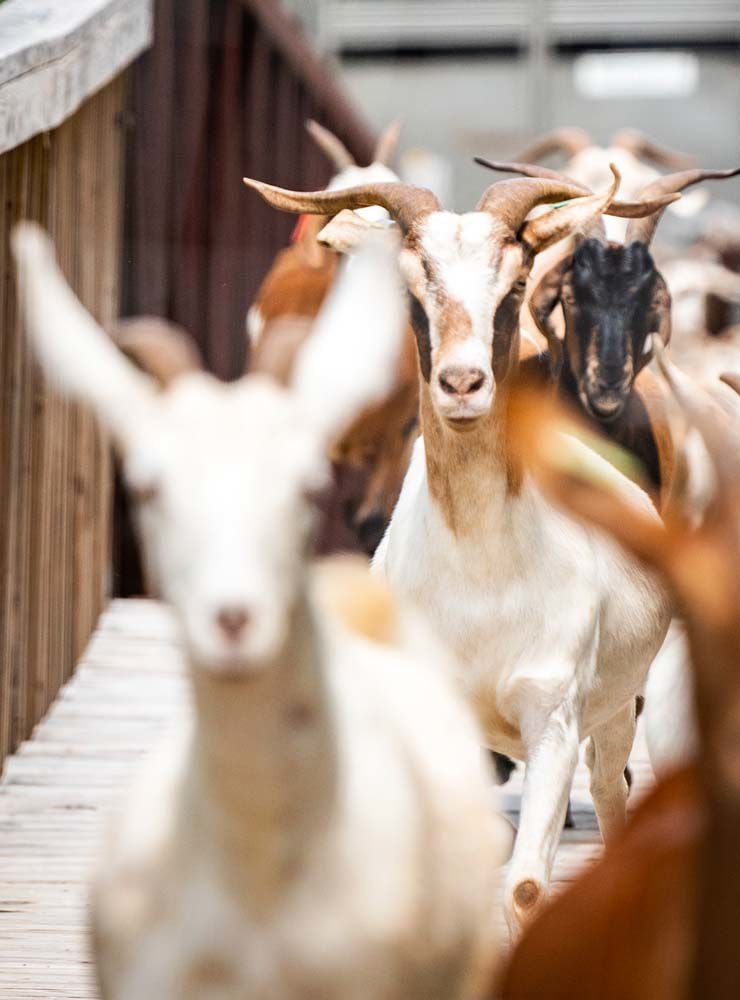 Jake Dorner, manager of Wells Farm Goats, leads his goats across a bridge over Salem Creek. 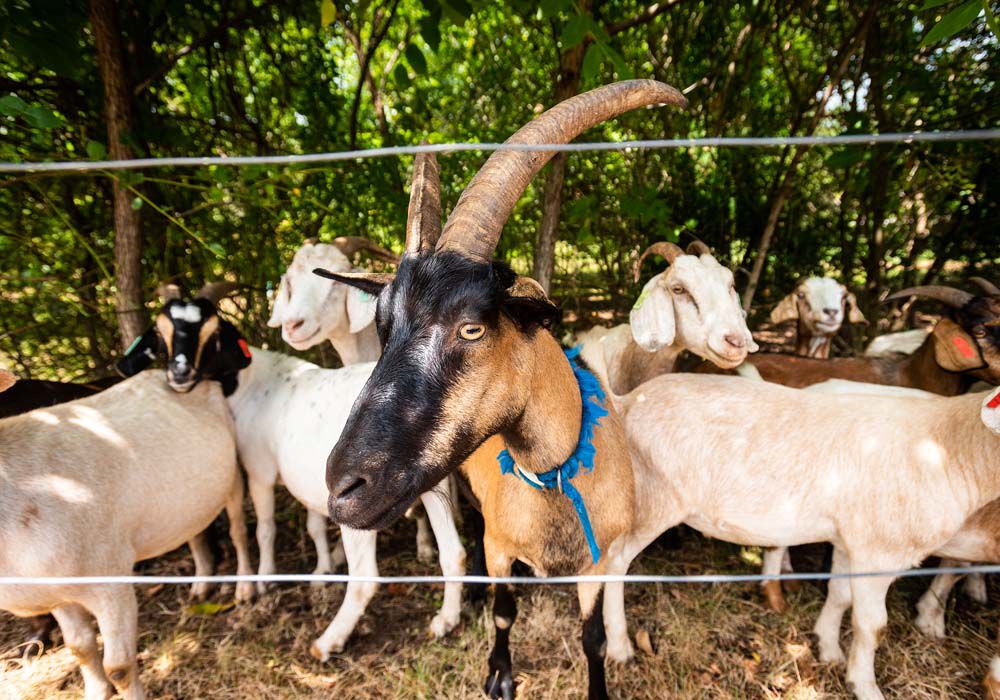 Reuben the goat, one of many goats from Wells Farm Goats, that’s responsible for eating his fair share of delicious kudzu. Reuben, however, is sort of the group’s fearless leader.

Goats from Wells Farm Goats clear Kudzu and other vegetation at the Salem Creek Greenway.

A goat from Wells Farm Goats clears Kudzu and other vegetation at the Salem Creek Greenway.

Jake Dorner, manager of Wells Farm Goats, leads his goats from one paddock to another along the Salem Creek Greenway on Friday, Aug. 2, 2019. The goats are helping clear unsightly kudzu from the greenway.

Jake Dorner, manager of Wells Farm Goats, leads his goats across a bridge over Salem Creek.

Reuben the goat, one of many goats from Wells Farm Goats, that’s responsible for eating his fair share of delicious kudzu. Reuben, however, is sort of the group’s fearless leader.

Imagine a summer blockbuster about heroes clad in white. Their archnemesis? An evil offender, a vile plague that slowly wreathes its way through all that is good and strangles the life out of everything in its path. At stake? A Twin City and all of her citizens.

This isn’t some generic Hollywood tent-pole, however, or the next saga in a multi-billion dollar franchise. It’s a scene that took place right here in our own backyard.

Last summer, after almost a decade of remaining untouched, kudzu had taken up residence in roughly 17 acres of Salem Creek Greenway in Winston-Salem. And while upkeep is normally handled internally by Winston-Salem’s Vegetation Management team, the kudzu takeover proved more challenging than your typical plant or weed.

“There were a couple of different options we had,” says Keith Finch, director of vegetation management. “One of them was chemical. It would’ve been difficult to treat the area because there was so much of it. … we would’ve had to do it by hand. And if [we] had used chemicals, there would’ve been a brown out.”

That’s because kudzu is not just an invasive species — it literally strangles the life out of every plant in its path. And it’s hard to control. Kudzu has an extensive root system, which means that killing off the top layer literally only touches the surface.

But Jesse Hammond, who runs the eco-conscious landscaping company Dancing Iris Earthscapes, says that’s exactly why it was originally brought to the U.S.

“It’s good for erosion control because of its vine and how fast it grows,” Hammond says. “That’s how they sold it to farmers.”

There’s an old wives tale that you can sit on your porch and watch kudzu grow. In the summer months, that’s pretty much true; in those idyllic conditions it can extend its reach by up to a foot a day, if not more. Hammond adds that kudzu can also jump from tree-to-tree. That “jumping” results in what he calls “these monster-looking things,” vines that make kudzu look creepy and villainous.

So Winston-Salem had limited options. Weed killers would leave the Salem Creek Greenway brown and barren, plus the city was concerned about where all those chemicals would go after killing the kudzu; into nearby ponds, water sources, and eventually into our own people.

They flirted with using big equipment, but again, it being a wet area made that task near impossible.

So the city decided on a more novel approach during the summer of 2019: let nature do its thing.

Enter Jake Dorner and his merry band of Wells Farm goats, a superhero team-up dedicated to slowly chewing the kudzu away.

“It’s an instinct for them; they’d rather eat up high than grass down low,” says Dorner.

The goats are transported to the job site via trailer, and spend a week at a time battling the kudzu, one acre at a time. Then, their pens are rotated to a new section of trail to continue their epic adventure.

The city says foliage-control goats and chemicals were both expensive options, but the goats being more environmentally-friendly made them the obvious choice.

“Goats don’t bother the soil as much, and there’s no leeching. Environmentally, they’re just good,” says Finch before a long pause. “I don’t know how you put this … they poop back. They give back nutrients to your soil.”

But the goats’ work isn’t done yet. Much like Marvel’s big-screen team-ups, we’ll see the hooved heroes show up again for sequel appearances in the summers and fall of both this year and next.

“If we took them away and didn’t bring them back this year, [the kudzu] would’ve grown back,” Finch says. “To be successful, it takes about three years.”

After that, the city will still have annual routine maintenance, such as vines to cut and patches to kill, but it should be much more manageable.

He also spoke affectionately about one goat in-particular: Reuben, the de-facto leader of the team. Reuben made a strong impression for his take-charge personality and celebrity stature. Dorner says Reuben leads his pack as the first one in, last one out.

Unfortunately, the makeup of the team might soon change a bit. The owner of Wells Farm recently announced he’s closing up shop, so the herd will be reduced from its current 200 horn count, and Reuben will retire. But Jake Dorner and his girlfriend, Morgan Lytle, do plan on keeping the business going since they’re one of the few groups on this side of the states practicing this unique kind of greenery cultivation.

Only 55 goats were needed last year. Fewer will be needed in their return seasonal trips since so much of the kudzu was already eaten back, and each trip should get shorter.

Plus, with those changes come upgrades. Dorner wants to add a few alpacas to the herd not because they’re better at kudzu chewing (goats are hands-down better than alpaca, cows, and similar farm cattle), but because they will protect the goats from coyotes and other predators.

But whatever you do, don’t rush out and adopt your own little Reuben just to clean up some backyard weeds just yet, warns Dorner.

Plus, kudzu isn’t all bad. The vine is more nutrient-dense than other vegetation, and goats will pick it first over things like grass and tree leaves.

So maybe the real hero of this story isn’t the goats, the city, the goat farmer, or even Reuben himself. And maybe the villain isn’t the invasive kudzu, which, for its purpose, is just carrying out a natural prime directive.

Maybe it’s the community built on tobacco plants which, for one brief summer, rallied around a few furry goats and an eco-friendly way of killing a little kudzu.

As a 16-year Winston-Salem-resident turned hippie-eco gardener, Hammond says it makes him “proud” that his city would choose what he always nudges his own clients toward: the more natural, sustainable solution.