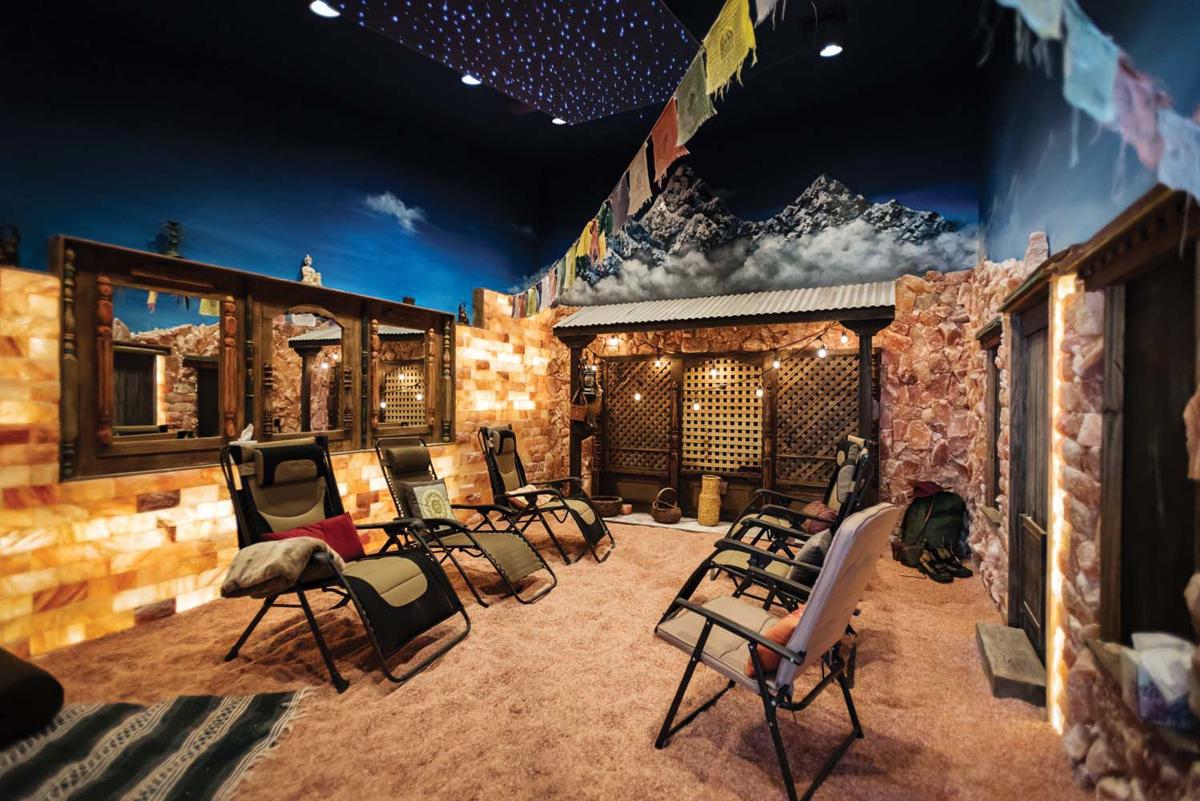 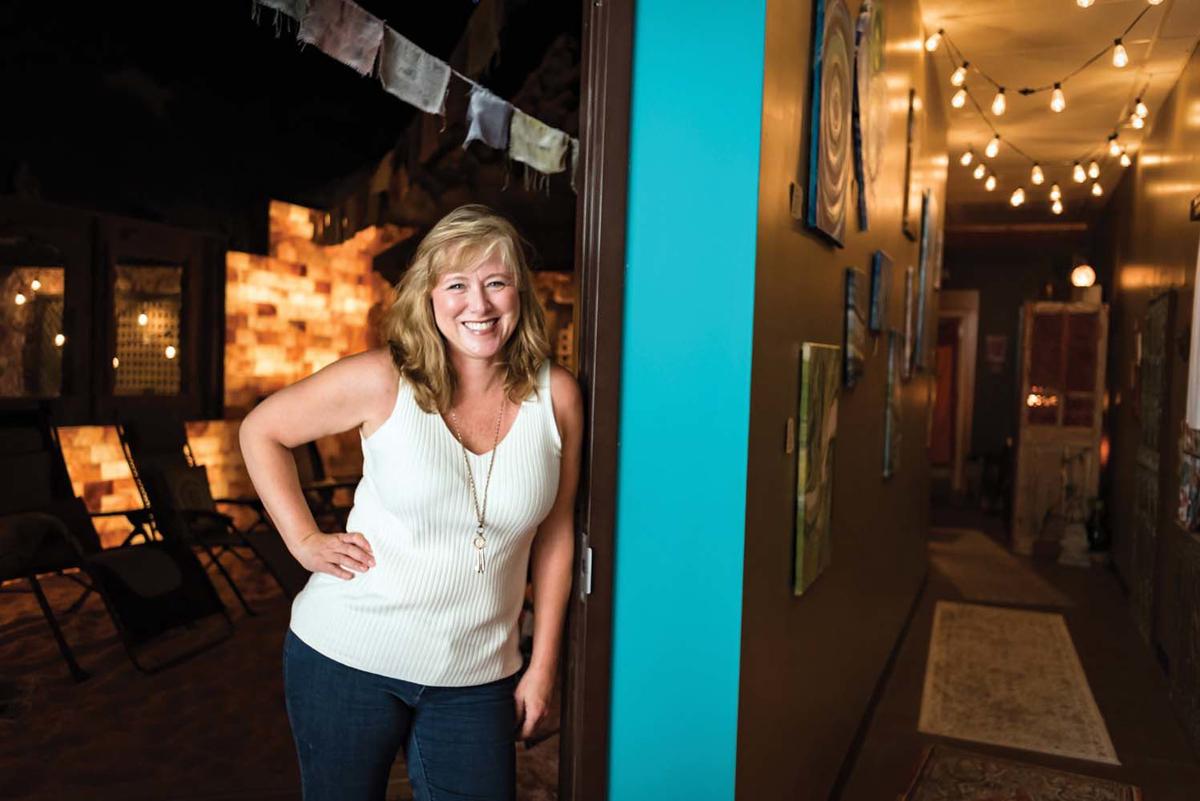 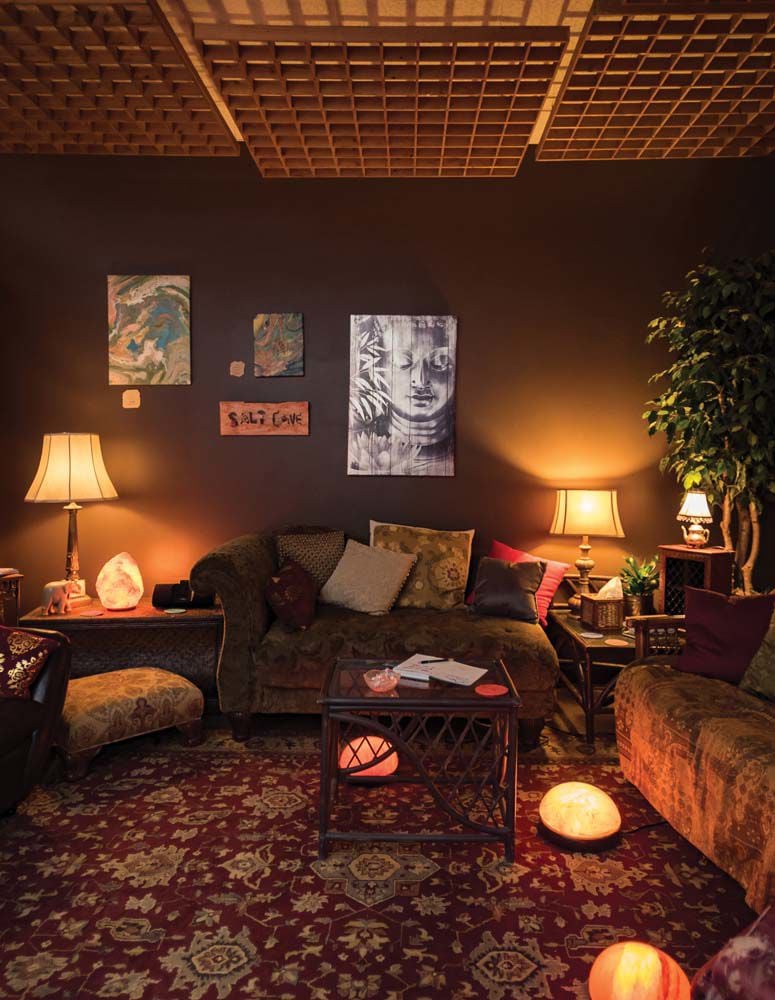 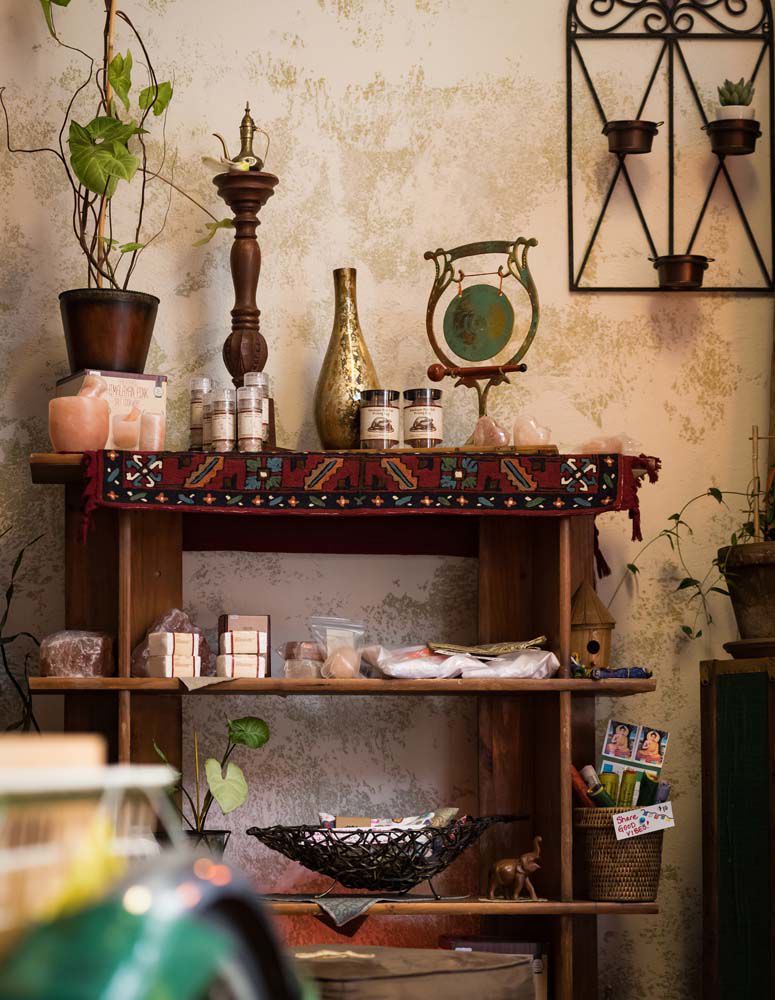 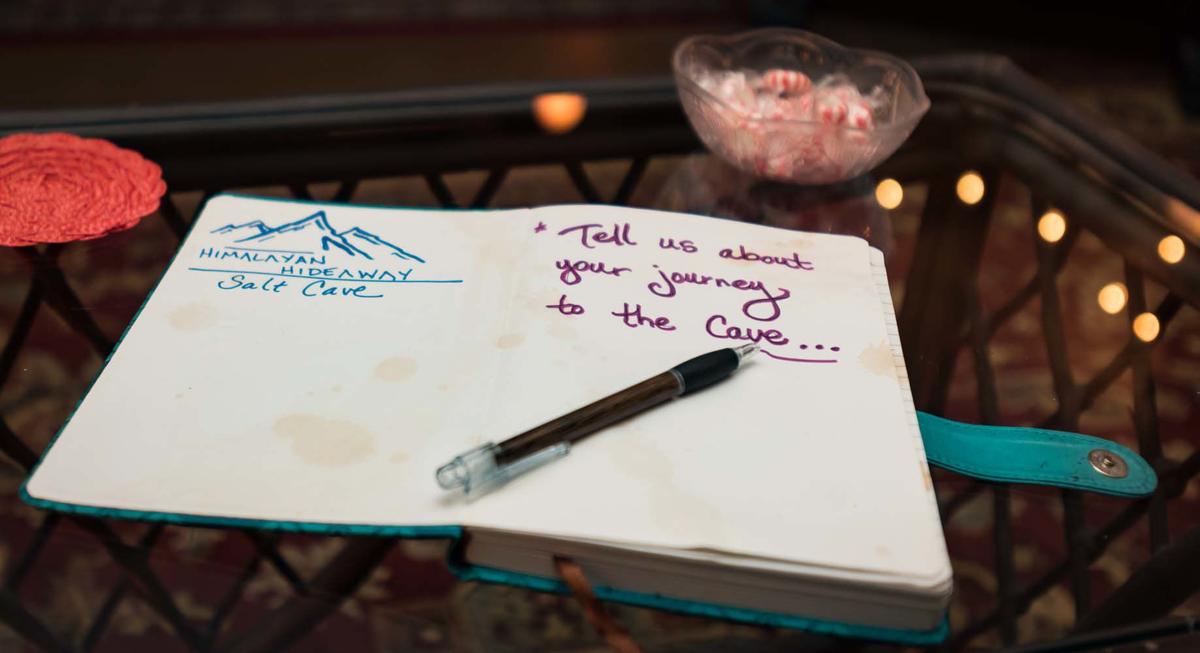 A guest book in the tea room at Himalayan Hideaway Salt Cave. 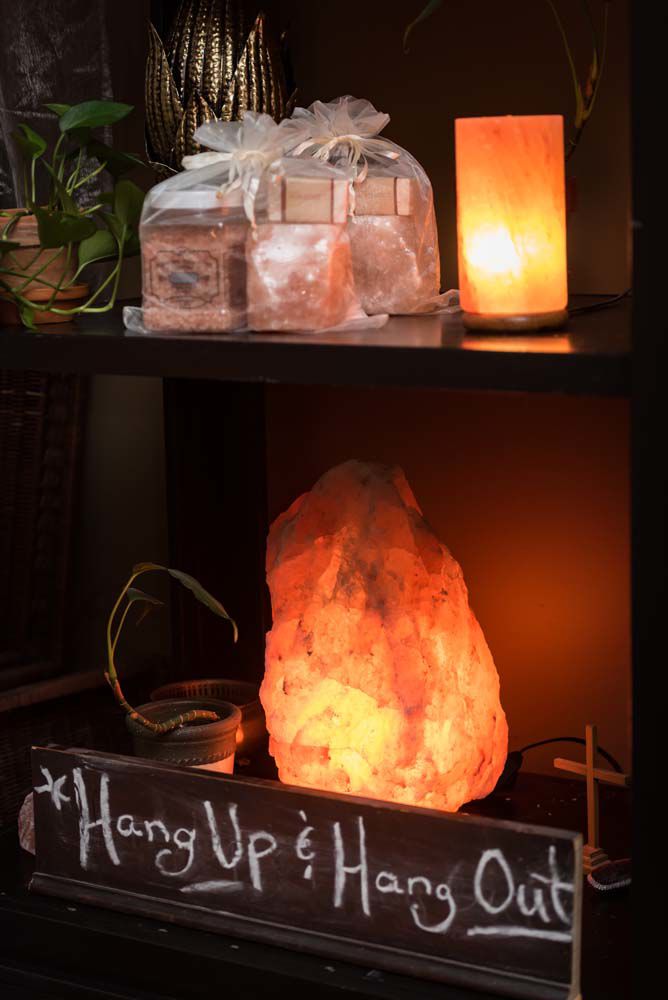 Signage and salt lamps in the tea room at Himalayan Hideaway Salt Cave.

A guest book in the tea room at Himalayan Hideaway Salt Cave.

Signage and salt lamps in the tea room at Himalayan Hideaway Salt Cave.

Chrissy Klunder was nearly bedridden, and doctors didn’t have the slightest clue as to what was ailing her. She had done the standard medical tests, taken 13 pills consisting of vitamins and prescriptions daily, changed her diet, and visited the specialists.

On a trip to Asheville, though, Klunder and her pals booked a session at a salt cave, excited for the relaxation it would provide. After an hour in the cave, Klunder felt like a changed woman.

“One day I thought I got the flu and it never went away; everything in my life just stopped,” she says. “We went to a salt cave and later that day I had a noticeable change in my pain and an uptick in my energy.”

Since her experience, Klunder has left the corporate world and embarked on her own small business venture, opening Himalayan Hideaway Salt Cave on Robinhood Road.

“Once I made my mind up [to open the cave], I couldn’t think about anything else. It’s also very rewarding,” she says. “I often think, ‘How did I go from being bed bound to now I’ve been open for a year?’”

And since Klunder has opened, Vicki Sullivan has become a regular visitor at Himalayan Hideaway. She had her own reasons for beginning salt therapy: She was a full-time caregiver for her sick husband of 40 years, so she was lucky if she got an hour to herself each day. Most of her spare time was spent at the grocery store or running errands.

“Sometimes I would sit in the car and just calm myself down before going home to him,” she says. “I noticed the [salt cave] and thought, ‘It looks warm. It looks inviting.’”

Before he passed away, Sullivan started to come to the cave during all of his rehabs, hospital stays, and ambulance pick-ups, and it made a noticeable difference in her life. Now that he’s gone, she regularly visits as a way to de-stress. She’s been known to snore in the cave after she falls asleep.

As for me, I’ve come to the cave as a slight skeptic with an open mind — and with a headache behind my left eye. With both Klunder and Sullivan encouraging a session, I went into the cave unsure of what to expect.

I woke up an hour later with a runny nose (par for the course), but my headache was gone.

“Because [salt] gets [inhaled], it absorbs all those toxins and bacteria and breaks them down,” Klunder says, explaining why my nose was runny. “That’s where the benefit comes in.”

Himalayan salt therapy, also known as halotherapy, is not a new concept. In fact, the practice of using salt as a cleansing and healing therapy has been around for centuries.

The benefits run the gamut but most notoriously include relief for respiratory illnesses, skin conditions, and stress and anxiety. If you suffer from allergies or arthritis, halotherapy may also provide a respite.

“It’s amazing to see some people’s demeanors when they first come in versus when they leave, and the tension that has left their body,” Klunder says.

No electronics are allowed in the cave, and Klunder purposefully refuses to install Wi-Fi so that guests will truly relax and embrace the restorative benefits that salt therapy provides.

The cave itself offers salt in various forms: authentic Himalayan salt crystals cover the floor like sand covers the beach, and a specially-designed generator pumps a fine concentration of pharmaceutical salt (think hospital salt) into the room. It’s not noticeable save for the fine lining of salt you may taste on your lips after you leave.

“Inside the cave is all Himalayan salt; that’s what’s on the walls and on the floor. That has all been hand-mined out of the Himalayan Mountains so it’s not been exposed to chemicals or diesel fuel,” Klunder says. “Himalayan salt has 84 different trace minerals and elements that our bodies need.”

In today’s society of big pharma plagued with an opioid addiction crisis, and air pollution at an all-time high, holistic approaches to wellness are being embraced at a steadily growing rate.

A salt cave is one of the few locations — except a hyperbaric chamber — where your lungs can experience sterile, anti-viral, and anti-bacterial air, allowing the respiratory tract to absorb micro-particles of salt. The result? Airways and lungs that are cleansed of impurities, mucus, and bacteria.

“We have to breathe,” says Klunder, comparing the lungs and airways to getting an oil change in your car. “If you didn’t get your oil changed in your car, it’s not going to keep running. Once you get your respiratory system clean, you’re able to function better.”

When you first walk into Himalayan Hideaway, there’s no indication that there’s a salt cave behind the cash register aside from a heavy-looking wood door with a large handle.

Inside the room, though, zero-gravity chairs line the decorated walls full of prayer flags. A fake fire resides in the corner, and the ceiling resembles the night sky, twinkling lights for stars and all. Meditation music plays throughout, guiding folks into a state of peace and relaxation.

Himalayan Hideaway offers a variety of sessions including those for individual appointments, bundled monthly or unlimited sessions, and private cave rentals.

In the tea room, foot detox stones sit at the edge of lush chaise lounges and supple couches full of pillows; visitors are encouraged to place their feet on the stones as they relax after a session. The stones (which are a solid piece of Himalayan salt) are warm, and help pull toxins out of the body through sweat — and are even said to help with circulation.

The colors of Nepal fill the room, as various salt lamps take up residency on tables and shelves. Visitors are encouraged to unwind after a session in the tea room, where friendships are often formed over a complimentary steaming cup.

“One of the most beautiful things I’ve seen here is when we have a mix of people in the cave —— people who don’t know each other — and they come back [to the tea room] after their session to hang out; strangers are conversing again,” she says. “It’s complete strangers back here laughing and joking. It is one of the most encouraging things to see.”

Misc.: For pricing or to schedule an appointment, call 336-422-6974 or visit online at winstonsalemsaltcave.com.