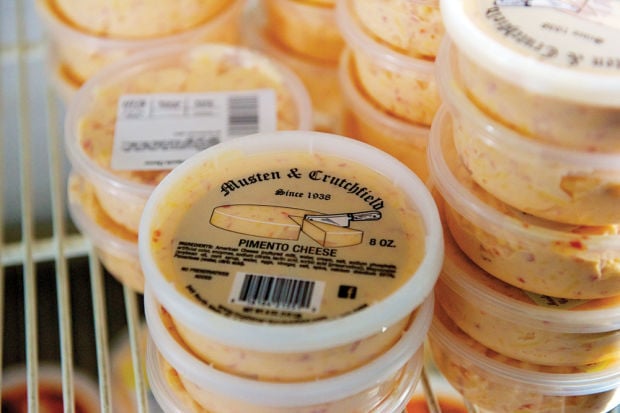 Musten & Crutchfield in Kernersville is renowned for its creamy pimento cheese. Workers there make about 3,500 pounds of pimento cheese each week. 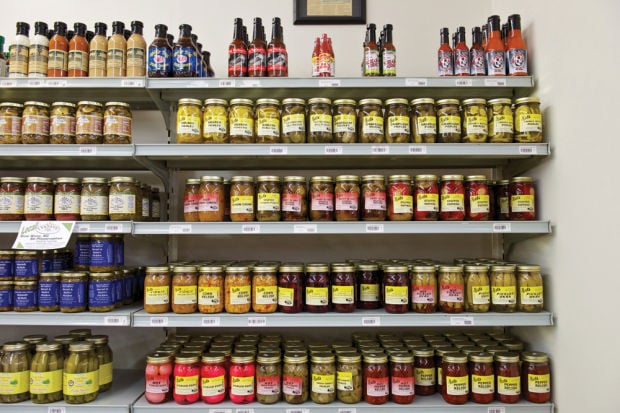 Musten & Crutchfield stocks a variety of locally made products

Musten & Crutchfield in Kernersville is renowned for its creamy pimento cheese. Workers there make about 3,500 pounds of pimento cheese each week.

Musten & Crutchfield stocks a variety of locally made products

An employee stacks 5-pound blocks of Schreiber American cheese into a grocery cart. He fills it to the top. The spicy smell of pimento fills your nose as soon as you step in the door. It’s prep day at Musten & Crutchfield Food Market.

Every Thursday, workers prepare cheese, pimentos, and mayonnaise to be mixed into pimento cheese the following Monday. They start each week by making about 3,500 pounds of pimento cheese.

They sell about 150 to 200 pounds of at their store on Main Street in Kernersville. Employees pack the other 3,300 pounds inside plastic containers, load them onto trucks, and ship them to Wal-Marts, Lowes Foods, and other independent stores across the state. Musten & Crutchfield has sold pimento cheese to customers from as far away as Portland and Seattle.

But in 2001, it almost stopped. An article from the Winston-Salem Journal hangs to the left of the front door. It mourns the loss of Musten & Crutchfield. It has testimonies from customers saying how much they’ll miss this small-town grocery store. But today the sign out front reads, “Open."

Just when Crutchfield’s father, Robert, was about to close the doors for good, he got a phone call from Lowes Foods. The grocery store chain wanted to buy his famed pimento cheese recipe. He told them he wasn’t intereted in selling the recipe, but offered to sell the product instead.

The recipe is simple, Crutchfield says. His great-grandmother, Elva Musten, created it during the Great Depression using what she had on hand. Sixty-three years later, her recipe saved the business.

“We make just a few things in here, but what we do make, we do it very well,” Crutchfield says.

His father, who ran the business for 55 years, died in May. Now Crutchfield is the fourth-generation owner. He’s changed things. He rents the right side of the building to a sporting-goods shop, and a woman sells flower arrangements from a counter on the left. The rest of the store is sparse, but neat. Old-timey candy, such as Squirrel Nut Zippers, Mary Janes, and Zagnut bars; fresh produce; glass-bottle drinks; and local jams and jellies are stationed throughout.

But the best part is toward the back of the store, where customers purchase custom-cut steaks and pork chops, along with homemade chili, chicken salad, liver pudding, and pimento cheese.

Two large butcher blocks sit on display in the center of the store. If you run your hand over the surface, you’ll feel 100 years’ worth of knife marks.

“No, they’re not for sale,” Crutchfield says, smiling.

He’s made some difficult changes over the years to keep this place going. But those butcher blocks—the original ones his great-grandparents once used—will be here as long as he is.