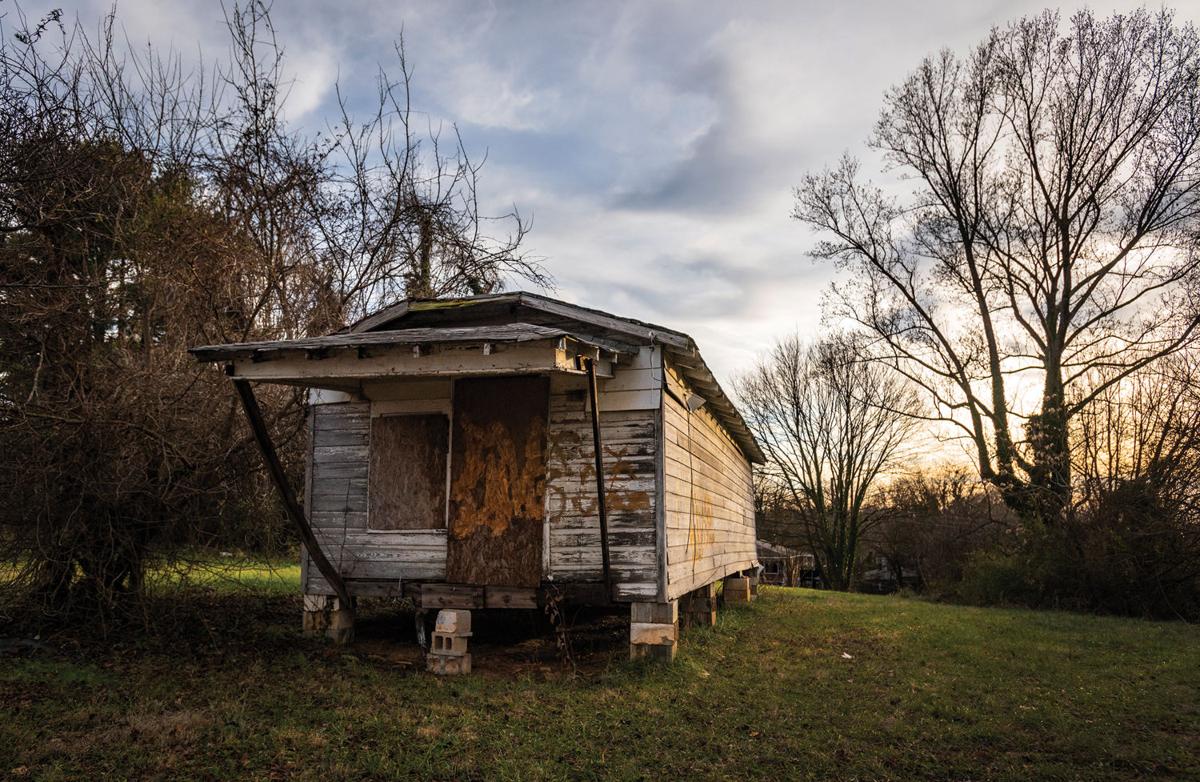 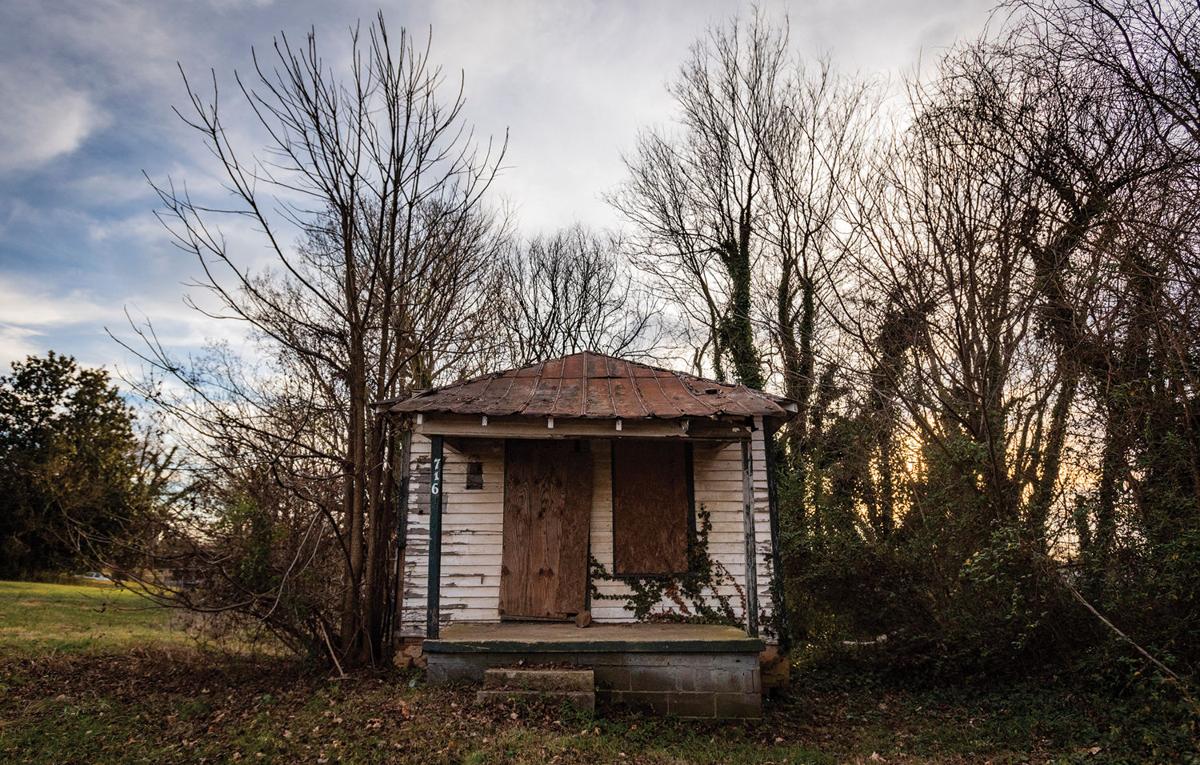 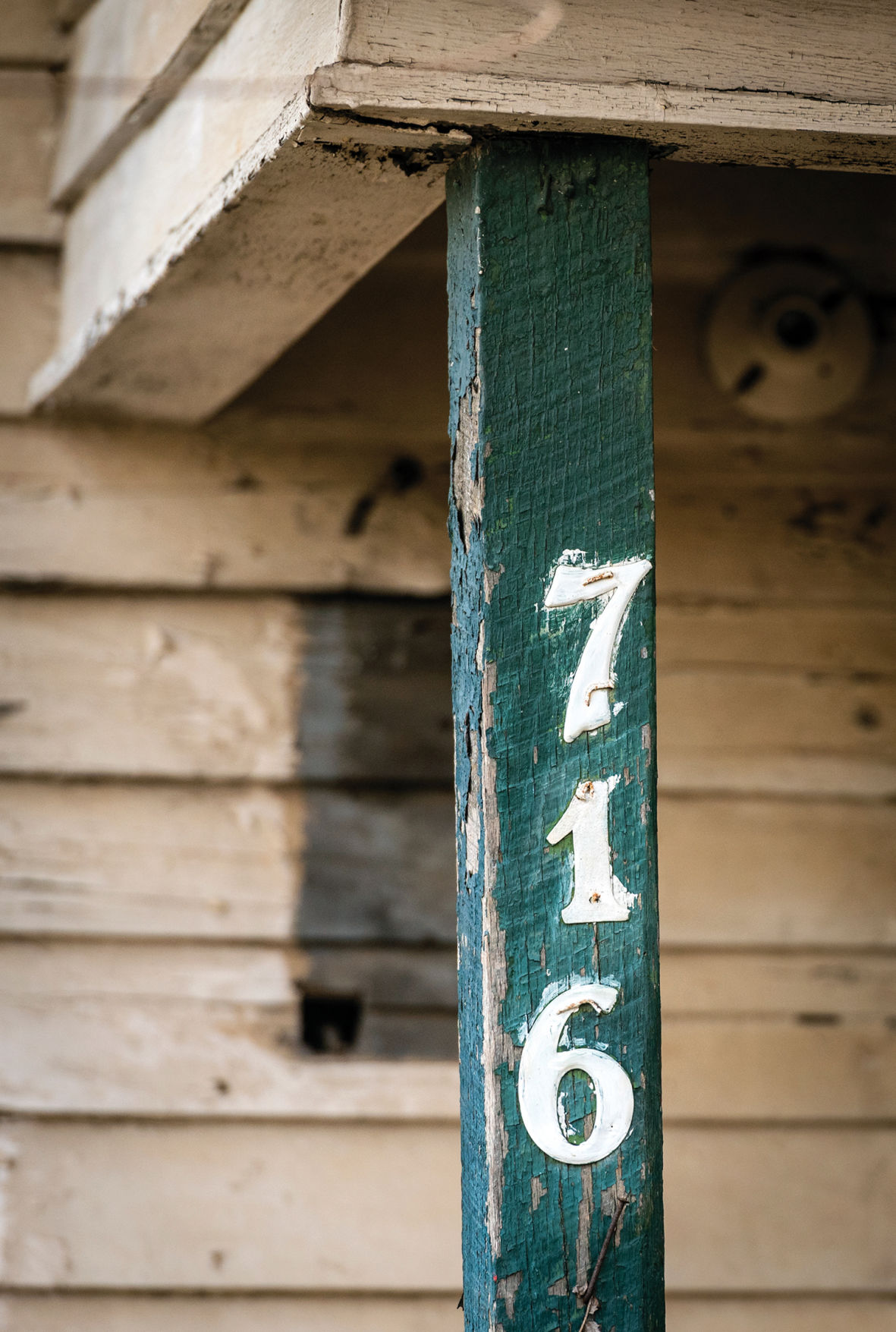 The house number on a 'shotgun' house along Humphrey Street. 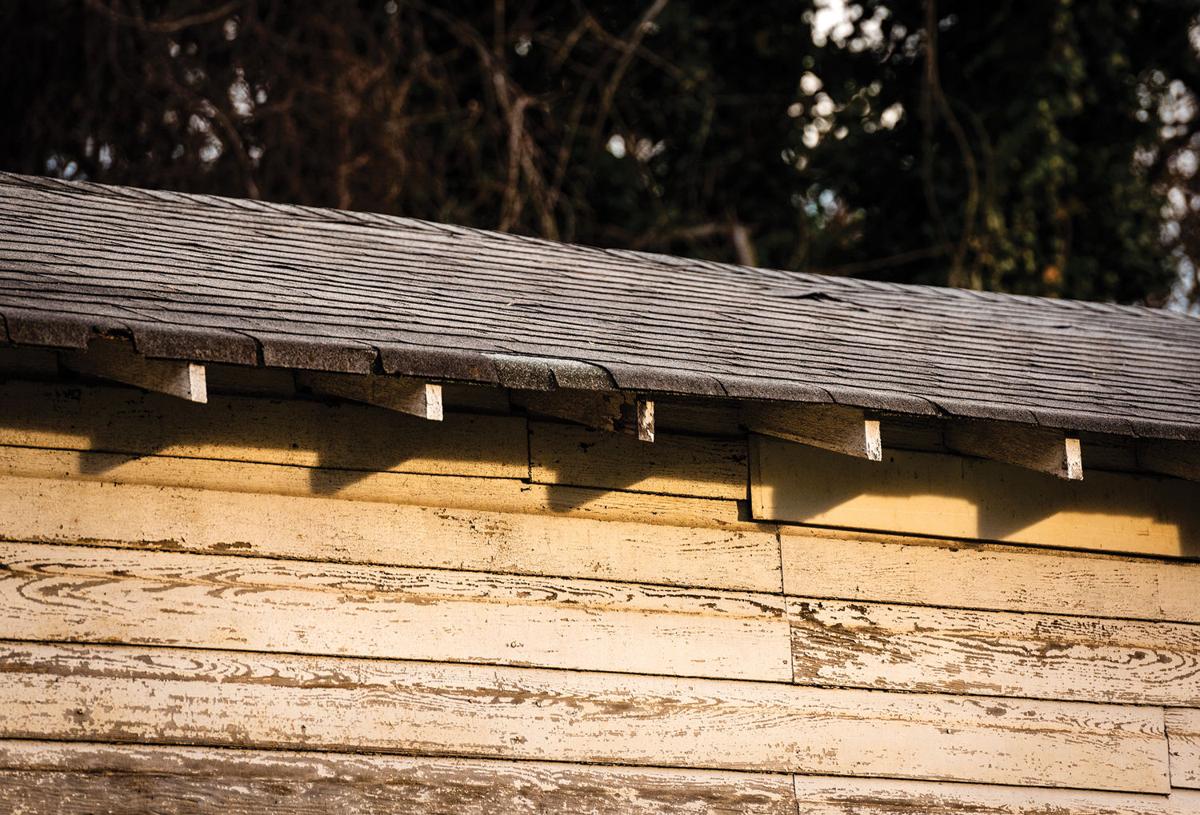 The roofs of the old shotgun houses on Humphrey Street are intact but much damage has been sustained to its integrity.

The house number on a 'shotgun' house along Humphrey Street.

The roofs of the old shotgun houses on Humphrey Street are intact but much damage has been sustained to its integrity.

Two houses sit empty and boarded up at the end of Humphrey Street overlooking Research Parkway.

The paint is peeling, the roofs are rusted, and the brick chimneys are crumbling.

But they remain, as Cheryl Harry puts it, “iconic symbols of freedom.”

Harry is leading an effort to preserve the shotgun houses, which date to the early 20th century, and use them to tell the story of the historically black Happy Hill neighborhood. The term shotgun house refers to the notion that one could fire a gun through the front entrance of the dwelling and have the round exit through the back without hitting anything. The houses were once quite common, but only a few in Winston-Salem remain occupied. Harry says she knows of about a half-dozen clustered around 13th and 14th streets, but not many more in the area.

She hopes to see one — or both — of the Humphrey Street houses transformed into exhibition spaces chronicling the history of this Winston-Salem community.

“After slavery ended, people didn’t have a lot and this was the type of housing many people could afford back then,” she says. “Other factors like Jim Crow and segregation limited where people could live. But out of these tiny vessels of memory, you have people who emerged as doctors, lawyers, supervisors. So many of our historical buildings have been torn down, but it’s important to have African-American history in the landscape.”

Harry is executive director and founder of Triad Cultural Arts, a nonprofit which seeks to promote local African-American history. Among other things, the organization sponsors Winston-Salem’s Juneteenth Festival, and hosts cultural tours throughout the area.

Of the two houses on the Humphrey Street site, one sits on its original foundation and local preservationists first proposed trying to restore it in 1999. The other dwelling is believed to have originally been located on Alder Street, but moved in the early 1990s to a site on Humphrey Street where an electrical substation now sits.

“My colleagues were working on a tour and were over in Happy Hill,” says Harry, who was working at nearby Old Salem at the time. “They stumbled upon the fact that that house was about to be destroyed. We rushed over there and got the foreman to hold off on [the demolition]. We started emailing people in the city and it just sort of began to snowball.”

The city moved the house a few hundred feet to its current spot, adjacent to the first home, in 2014. Around that time, Triad Cultural Arts got involved with preservation efforts. The organization launched a fundraising campaign and unveiled plans to move the houses to another site where they could possibly serve as a gateway and welcome center for Happy Hill Park.

The Happy Hill neighborhood was founded in 1872 on the site of what had been a plantation where Moravian doctor Friedrich Schumann lived. It was the city’s first planned black neighborhood, and had originally been known as Liberia, named after the West African republic founded by freed slaves.

“The land was a flood plain,” Harry says. “It had a lot of mosquitos; they had to petition the city to try to get rid of the mosquitoes. You had community leaders rising up to try to get necessities for people.”

For much of its history the area was a working class neighborhood, Harry says.

According to census records from 1940 (the earliest for which could be found for either home), the first house at the Humphrey Street site was occupied by a woman named Anne Rorie, along with her son, daughter, and granddaughter. She died in 1948, a death certificate listing her occupation as “domestic.” Census records list occupations for others in the neighborhood as truck driver, tobacco stemmer, ditch digger, and house cleaner.

The two homes at Humphrey Street are rectangular in shape and measure roughly 700 square feet. They have three rooms “stacked back to back,” as Harry puts it — a living room, bedroom, and kitchen.

The first house at Humphrey Street has a roof, floors, and beaded board walls that are in “fair condition” according to a report prepared by a historical preservation group from Middle Tennessee State University. However, the rear part sustained some water damage from indoor plumbing that was installed around 1960.

The other house, though, suffered a good deal of wear, possibly from the move in the early 1990s, according to the report. The front porch stoop is missing, as are the supports for the roof over the front door. The roof along the rest of the house is sagging, and the rear room has “suffered from severe water damage,” according to the report.

Restoration is expected to cost roughly $200,000 per house. The focus right now is on preserving the first house, she says. The city is going to pursue some grant funding but a timeline isn’t in place yet. Harry’s organization also plans on seeking private donations and hosting some fundraisers.

She sees the houses serving as the impetus for further development in the Happy Hill community.

“This will be a place where people can come and interact with local history,” she says. “You’ll have some artifacts, some technology to help tell the story. I see young people coming, families coming, being engaged, saying, ‘Ooohh, I didn’t know that.’ I see older people being proud to have this repository of their history so that people can get a feel for what life was like. A lot of people may think, why spend this much money? But you can’t put a price tag on the importance of history.”