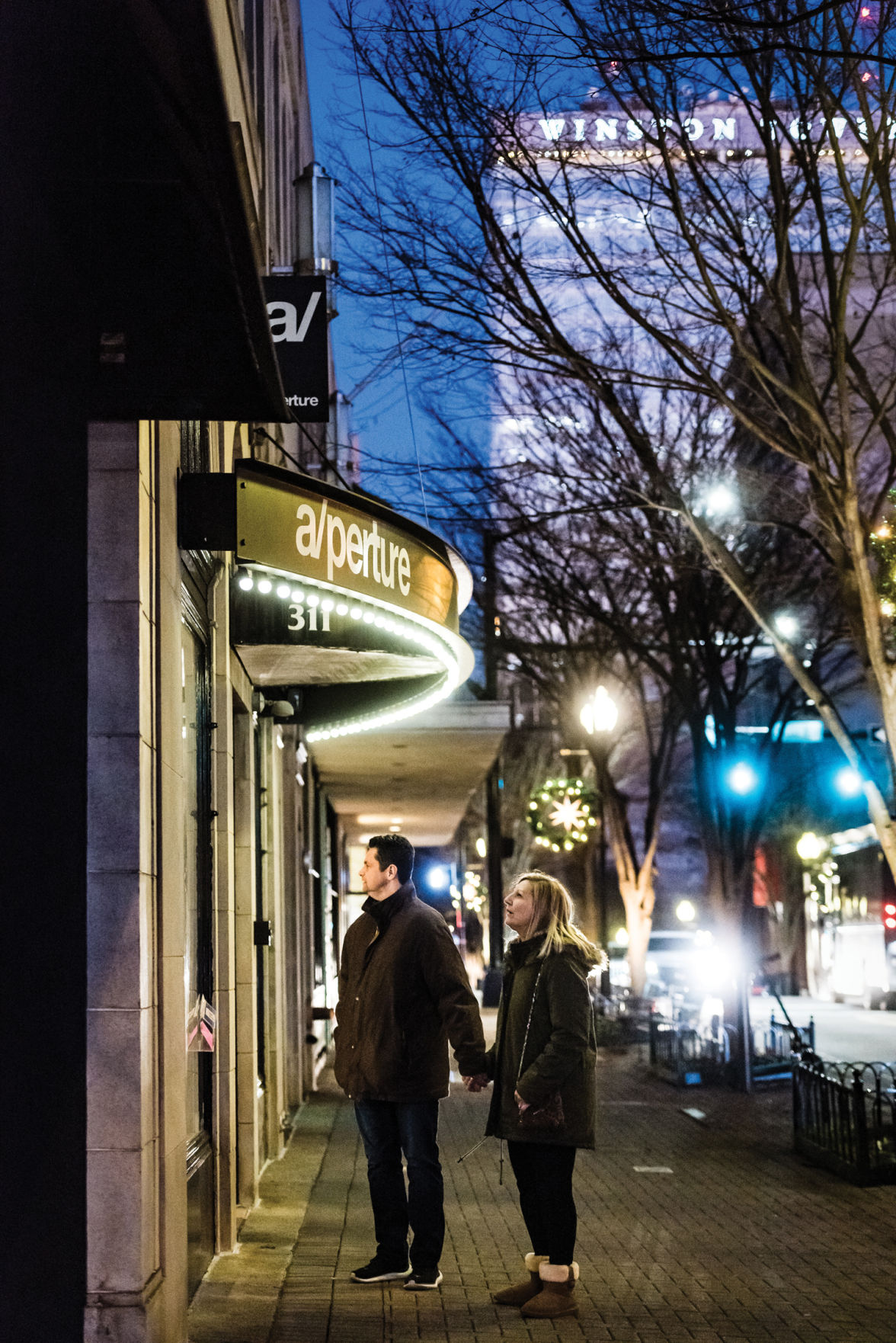 Tod and Paula Hughes stop to look at the showtimes at a/perture, Winston-Salem’s art-house cinema on Fourth Street.

Lawren Desai is the founder and owner of a/perture, a vision of love dedicated to providing independent films to the local community. 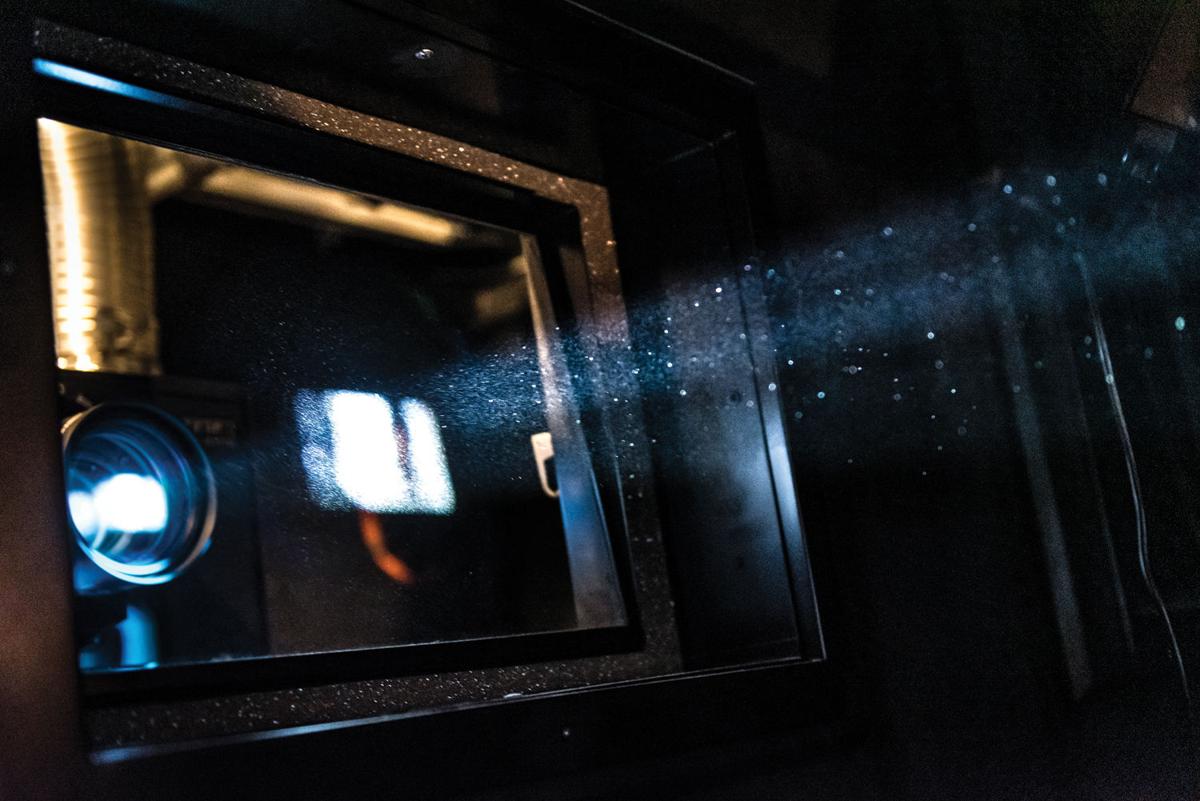 "Uncut Gems" is projected into Studio 1 at Aperture Theatre. 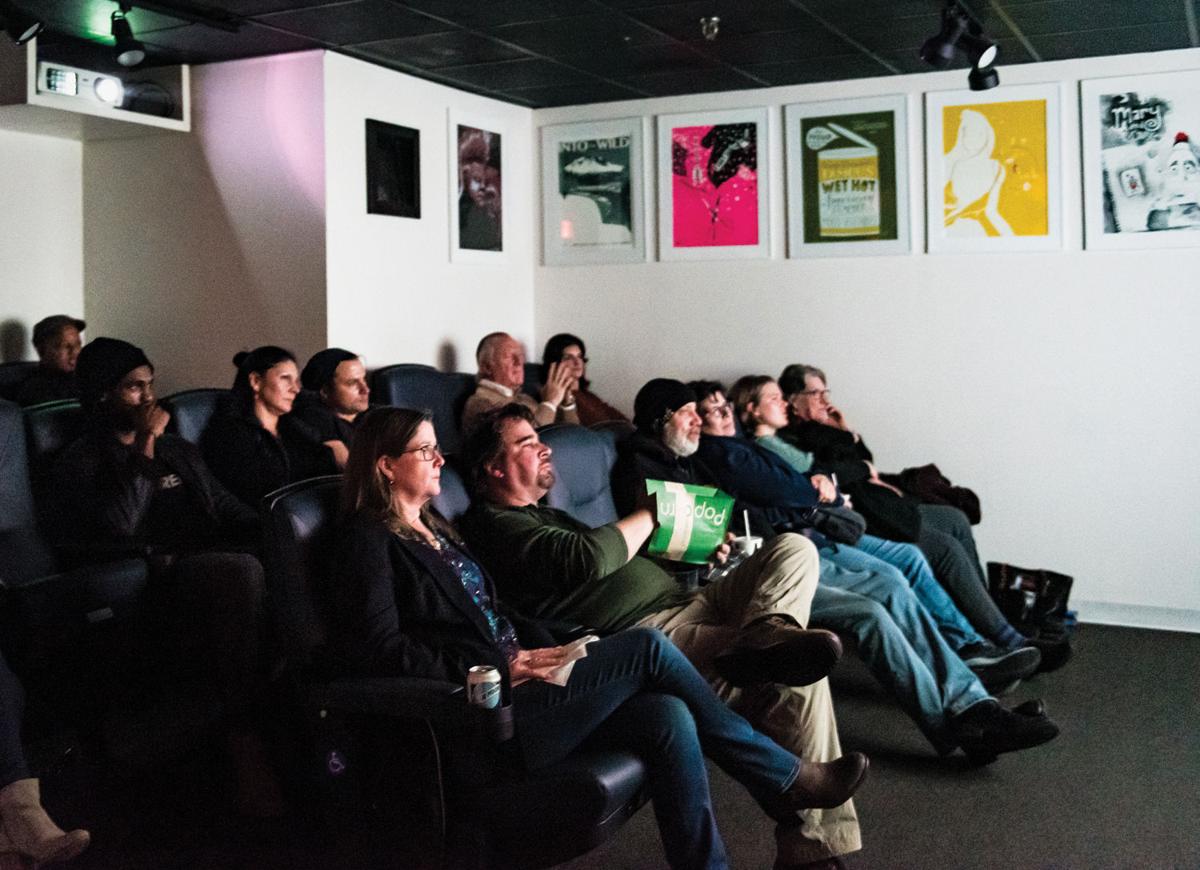 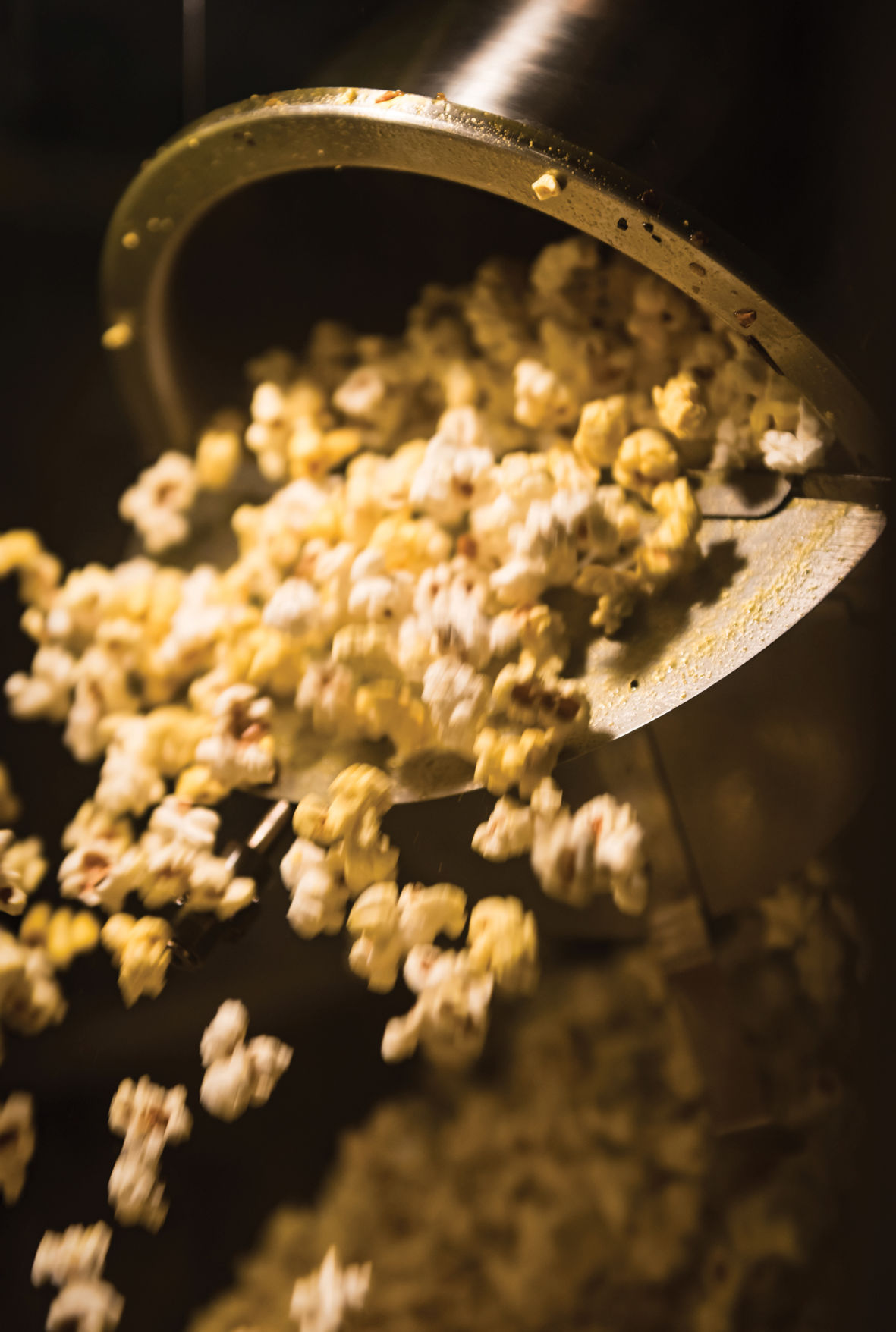 Victoria Bartle empties fresh popcorn into the bottom of the popcorn machine at a/perture.

Tod and Paula Hughes stop to look at the showtimes at a/perture, Winston-Salem’s art-house cinema on Fourth Street.

Lawren Desai is the founder and owner of a/perture, a vision of love dedicated to providing independent films to the local community.

"Uncut Gems" is projected into Studio 1 at Aperture Theatre.

Victoria Bartle empties fresh popcorn into the bottom of the popcorn machine at a/perture.

In January 2010, when Winston-Salem’s downtown revival was in its early days, Lawren Desai joined other like-minded entrepreneurs — many of them women — in taking a chance on the Twin City. She established a/perture, a small two-screen art-house cinema that would feature independent, foreign, documentary, local, and festival films on the up-and-coming street that was already home to Mellow Mushroom, but still a long way from the bustling place it is today.

Part of this was for the city — bringing movies back to downtown and helping spur the revival — and part was for her. Her son had just been born and she wanted her life to take a new direction, something different from the 9 to 5 workday world she had known before. A love of provocative and intriguing films also played into her decision.

“At the time, there was no place in town showing the kinds of films I wanted to see,” says Desai, executive director and curator at a/perture.

Ten years in, it’s been quite a journey.

The right time for downtown

While it was definitely a risk to showcase films that could be called quite niche, Desai feels it was a risk worth taking. She also had immense support from family — her father, architect Rence Callahan of Walter Robbs Callahan & Pierce Architects, provided sketches to show how the former office building could be transformed into a cinema. He continues to provide his creative vision to each new phase of the theater’s life. And her husband Jigar provided, and continues to provide, home support and a fresh perspective when she’s mulling new ideas.

“We are open 365 days a year, so his energy and thoughtful input are an incredibly important part of what we do here,” she says.

Since its opening a decade ago, a/perture has become more than just a movie house. Through collaborative partnerships and a new educational program, it’s become a place where ideas are shared and futures are inspired. In 2013, two new screening rooms expanded the cinema’s capacity, enabling the theater to screen thousands of films per year.

As downtown business success started to snowball, she and other business owners connected and collaborated. They began to depend on one another and look for ways to mutually promote their various establishments. This resulted in Second Sundays on Fourth and multiple partnerships with other organizations — Piedmont Opera, for example — that enabled a/perture to reach new audiences.

“There are now so many things for people to do in Winston-Salem that it helps to work with others to make sure we get on and stay on their radar when they’re considering how to spend their time and money,” Desai says.

‘We have to keep taking risks’

Success is not something that Desai feels she, or anyone, can take for granted.

“I love that we all took a risk and showed what’s possible,” she says. “But we have to keep taking risks. We can’t count on things being the same every year.”

Changes come swiftly in the cinematic world, from a technical shift from 35 mm films when a/perture opened to digital formats just three years later to all the options people have today for watching films.

“We have to stay flexible and adaptable,” Desai says.

For Desai and the team at a/perture, that means trying creative new series like Street Side Cinema, a free outdoor micro-cinema on Fourth Street. Street Side Cinema accepts submissions of short films through FilmFreeway. Submissions are curated into a program of film shorts and shown in a loop. Passers-by can stop for a quick serving of creative cinema. More than 1,200 films of multiple genres from around the world were submitted for the summer series, with 40 being shown, and more than 2,300 have come in for the winter series, which will feature 80 cinematic gems.

“It’s bringing film into the public art sphere,” Desai says. “And with people taking 1.3 million trips per year past our doors, we have a significant opportunity to highlight that art.”

Flexibility and adaptability also play into a/perture’s educational programming. The Lightboxers summer camp exposes students age 13 to 18 to short films and clips that can enhance their media literacy. A program for teachers helps enrich classroom lessons in literature, social studies, and science with screenings of feature films and shorts followed by deep dive discussions. The Scope is a community discussion of carefully chosen films designed to help audience members understand the unique language of film and see how stories can connect us with those who, on the surface, seem very different.

But the educational program that really causes Desai to light up is the new Girls + Screen after school program. The free program teaches high school girls to tell their own stories by looking at film through a feminist lens. They also study visual media literacy, which enables them to thoughtfully consider how the images they encounter through media every day affect how they feel about themselves and the world.

“There is a serious lack of female representation in the film industry,” Desai says. “This is one way that we can help open up these young girls to the possibilities of a career in film. We want to give them the opportunity and the confidence to tell their own stories.”

She also remembers the community of women who were part of the revitalization of downtown and how valuable their support was as she was getting her business up and running. The vision and perspective these women shared helped fuel Desai’s passion.

The Girls + Screen participants have already begun to share their own vision. They selected the films for a special Street Side Cinema series in December and January. And a/perture is continuing its support of women in the film industry with the sale of T-shirts supporting The Future of Film Is Female. The organization provides funds to female filmmakers who are currently working on short flicks.

As she looks ahead to the next decade, Desai is optimistic and ready to work hard to promote the communal film experience.

“We want to preserve the idea of going to see a film in a place with other people from all walks of life,” she says. “It’s such a valuable experience to enjoy art together.”

Interested in joining in a/perture’s mission as they look toward the next 10 years? Visit their website at aperturecinema.com to learn more about the organization.