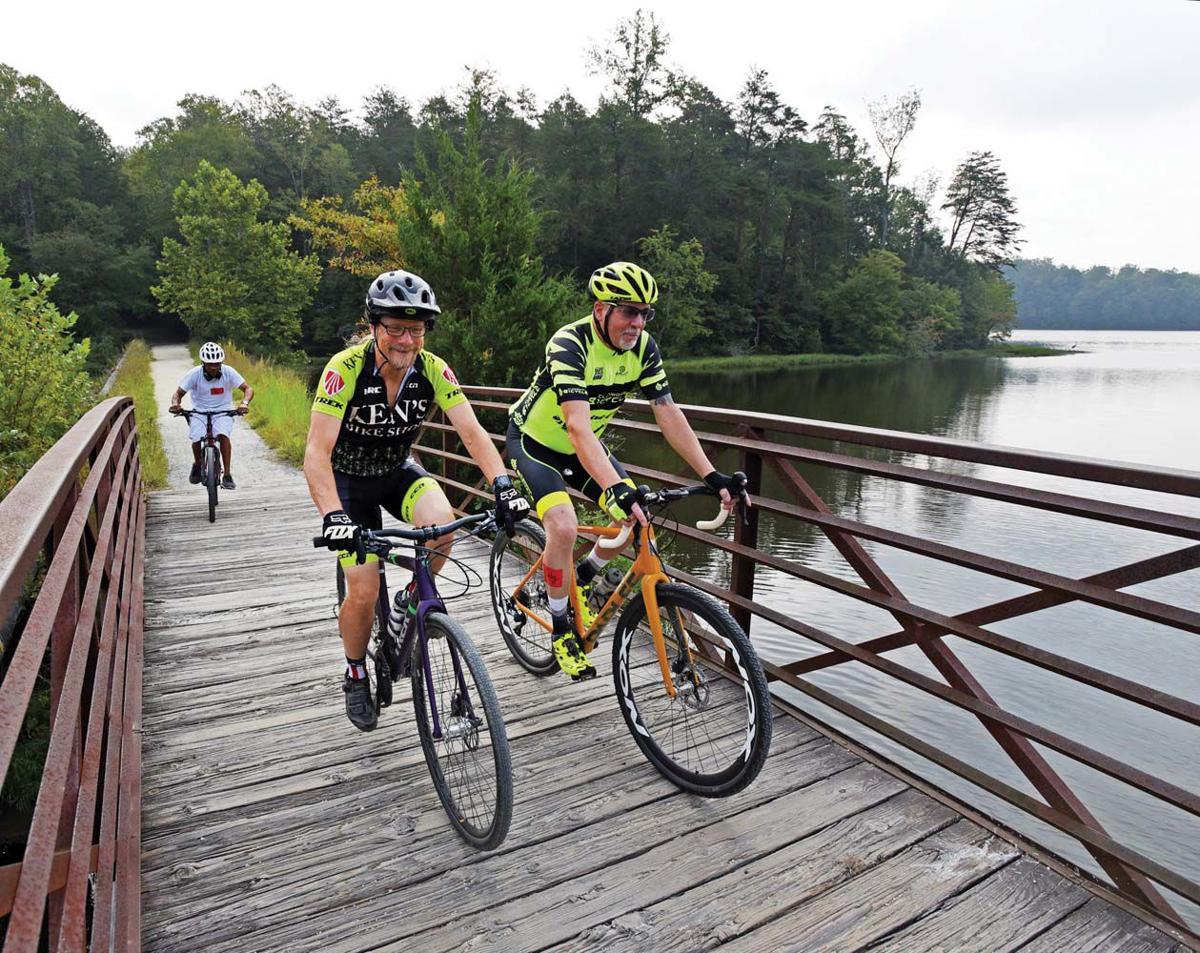 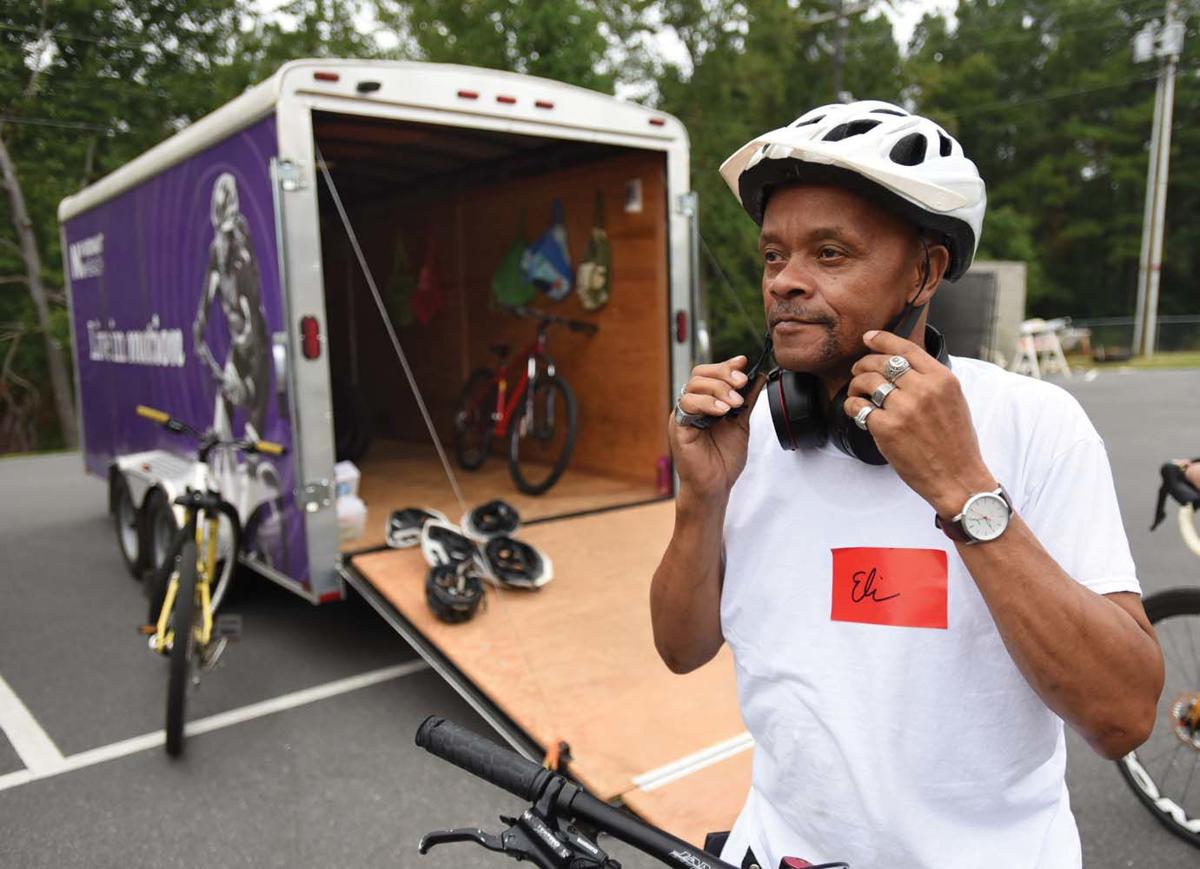 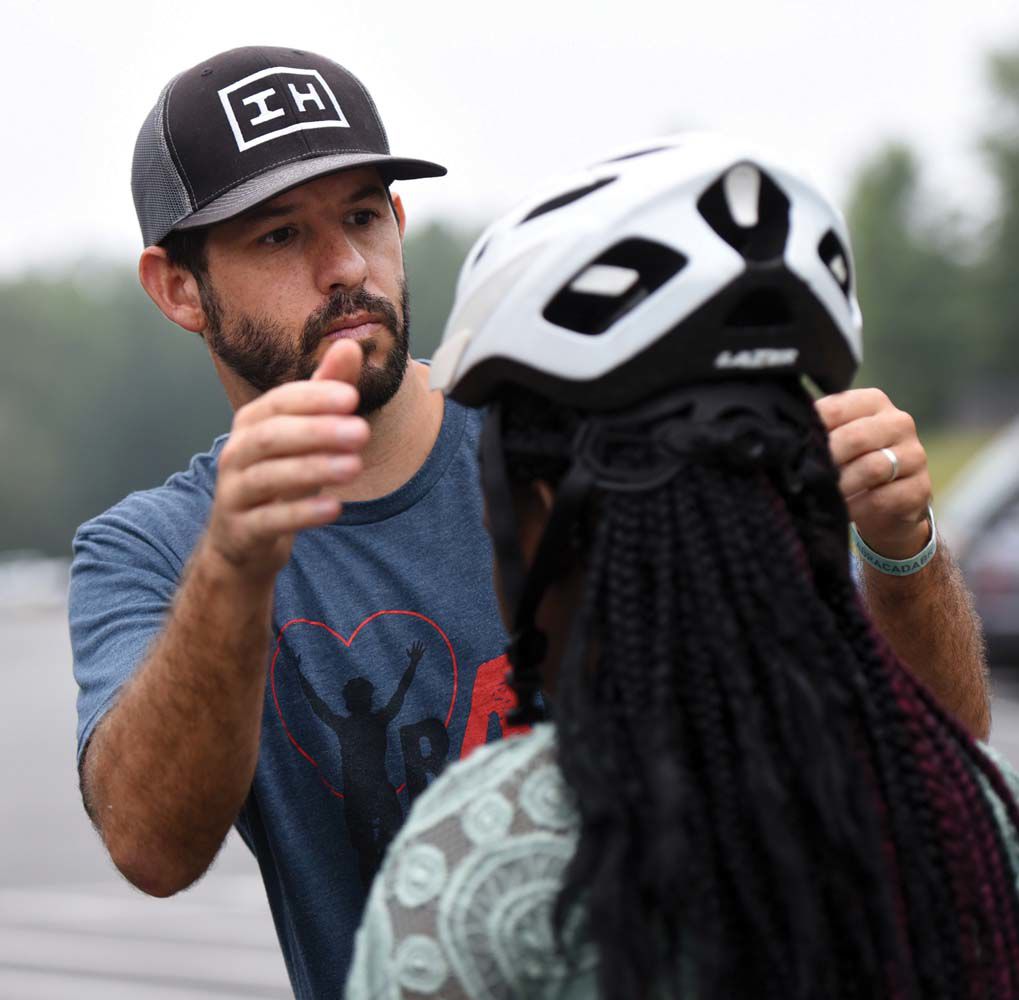 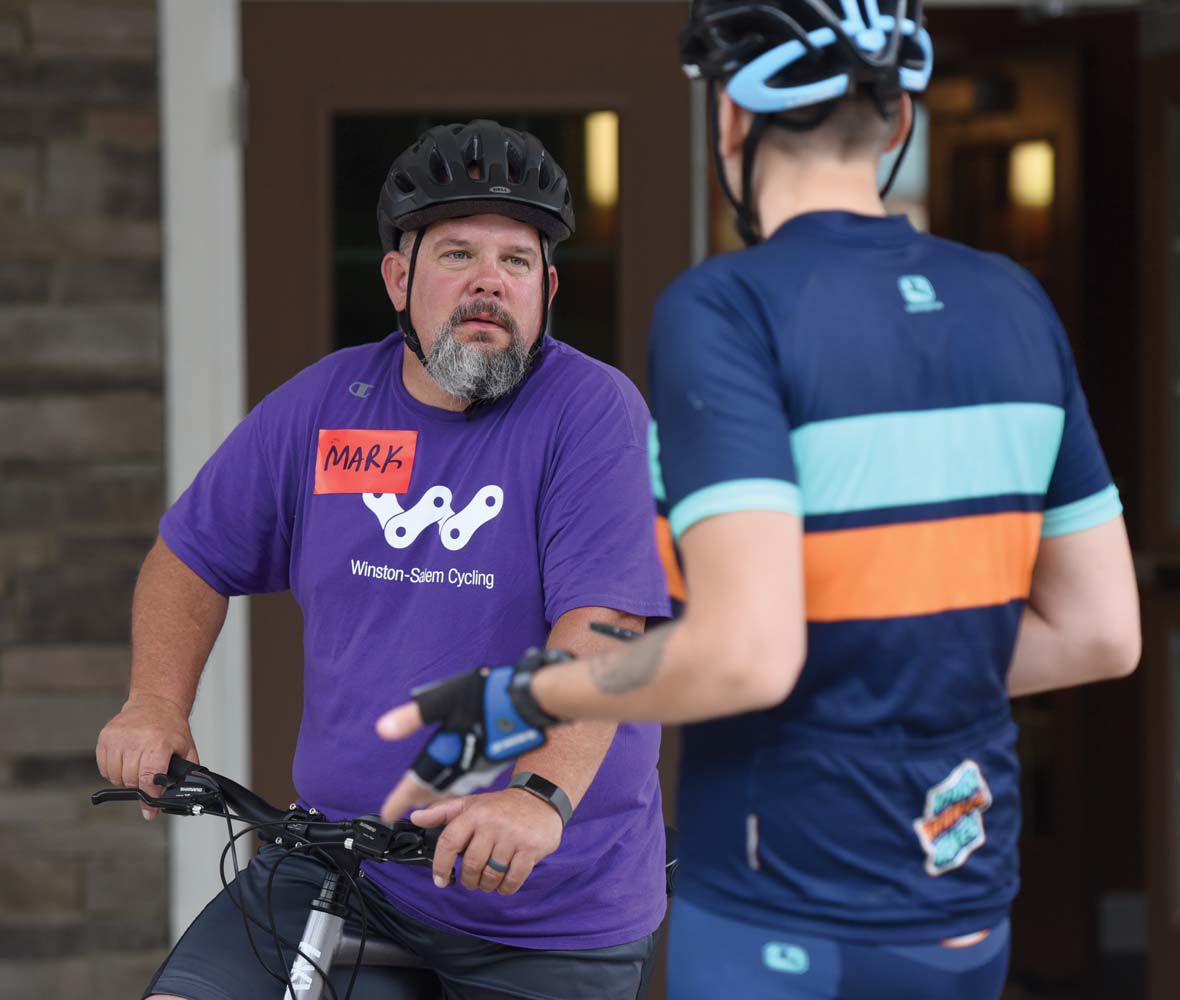 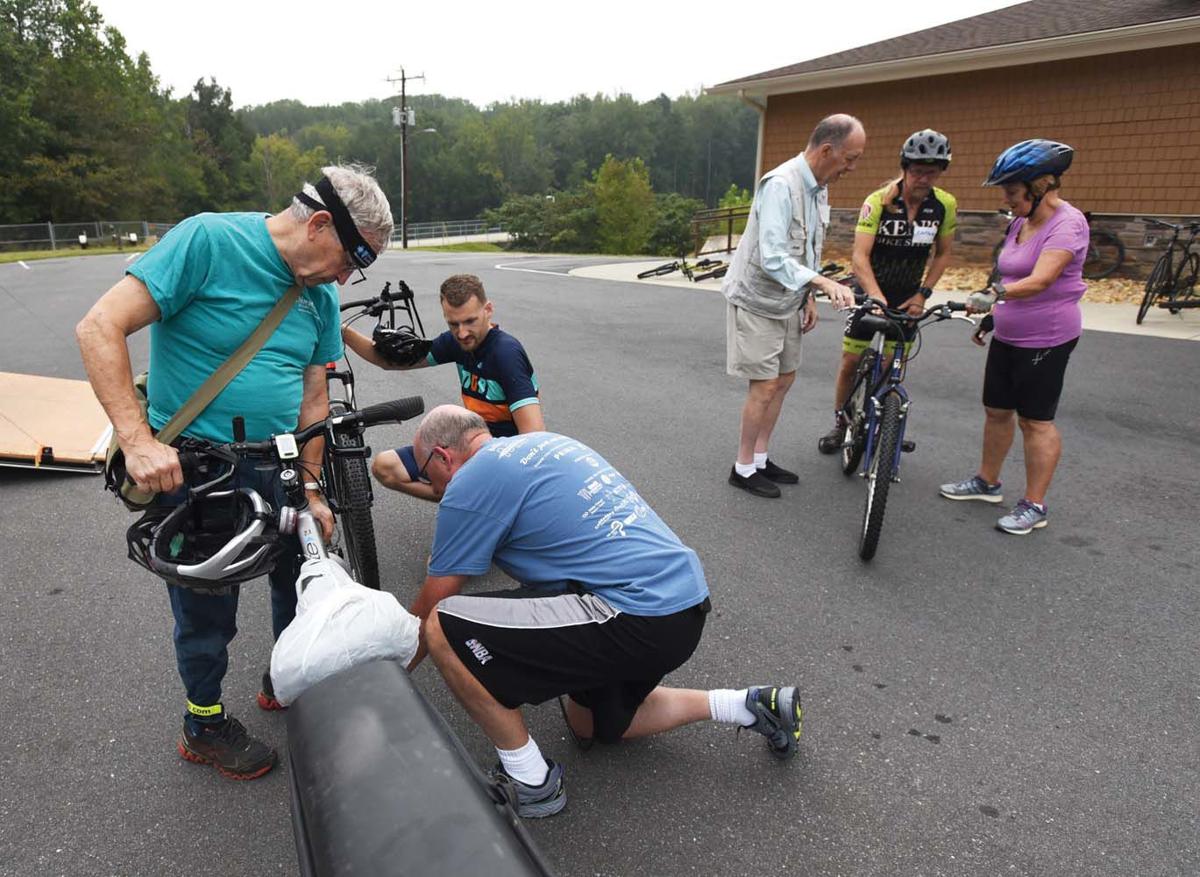 Military veterans have it tough. Not only can it be difficult to reintegrate into society whether or not they see combat; many suffer from post-traumatic stress disorder (PTSD), with symptoms like anxiety, depression, nightmares, and heightened reactions.

So it’s a big deal that Terry Snyder founded Operation North State, or ONS, in January. The group brings together vets and non-vets every month at Salem Lake for friendship and a sense of normalcy.

The monthly event is called Cycling Heals – Vets Connect, but even those who don’t ride bicycles can find something to do. Snyder, a retired banking executive, says the day is “about fellowship.”

“Come walk with your dog, feed the ducks, take the kids to the playground, or fish from the pier, but the day is about creating the opportunities for our wounded warriors to make new friends,” he says.

Among the veterans at the September ONS meeting was Rob Caudill, who brought along his companion dog, Max, a German shepherd mix. Caudill, a Kernersville resident and graduate of East Forsyth High School, says he’s disabled after stints in South Korea and Iraq.

“My mental state isn’t what it was when I was active,” he says.

Caudill and Max have been to every ONS outing since February, and Caudill even bought a bicycle, which he usually rides only at the meetings.

“Being a veteran who doesn’t go out much, this is something I look forward to,” he says.

Dana Hutson, a veteran from Elkin, also found a reason to go out and socialize through the meetups. Now an event volunteer, she says being involved with the group has helped her state of mind.

“I’ve gotten myself back,” she says. “I kind of hid in the house [before]; I was afraid to step out of the boundary.”

Other ONS participants have similar stories. Kernersville resident Matt Nassler suffered a brain injury and concussion after a roadside bomb during his service in Afghanistan.

“For the first two or three years after I got back, I couldn’t go out and do anything,” he says.

For others, the pain isn’t as fresh, but the benefits from the group are the same. Eli Burnette, who was in the service from 1976 to 1979, just after the Vietnam War, rode the seven-mile Salem Lake trail with about 10 other bikers.

“This is great for fellowship and exercise,” he says, adding that he had a great time biking “once I got my wind back.”

Non-veterans are also welcome to come to ONS’s events. Gina Brown, a Walnut Cove native and stay-at-home mom, says people come from all around, including a couple from Fort Bragg and a man from Columbia, South Carolina.

“It shows that people are hungry for being with other veterans,” she says.

ONS does more than just the Salem Lake meetups, too. They get involved with fishing and golf tournaments; they send gift packages to soldiers. They’ve even sponsored race car rides for vets at Virginia International Raceway.

Snyder emphasizes that veterans should be important to all citizens.

“I did this whole thing thinking as a citizen that we can do better for our veterans,” he says. “But I’m happy to say so many of our volunteers are like myself.”