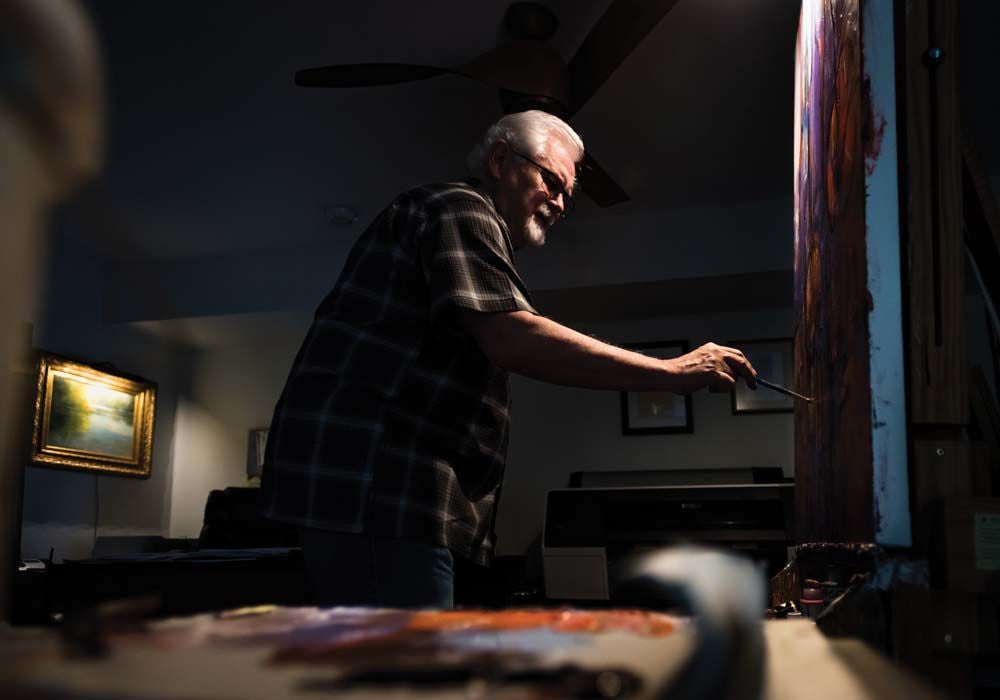 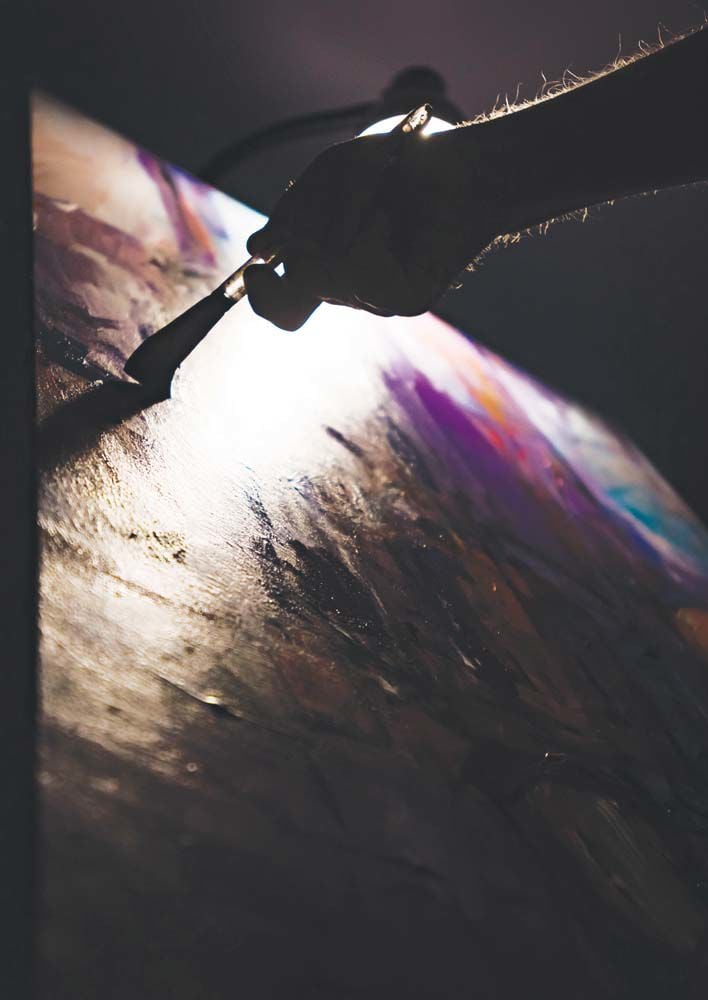 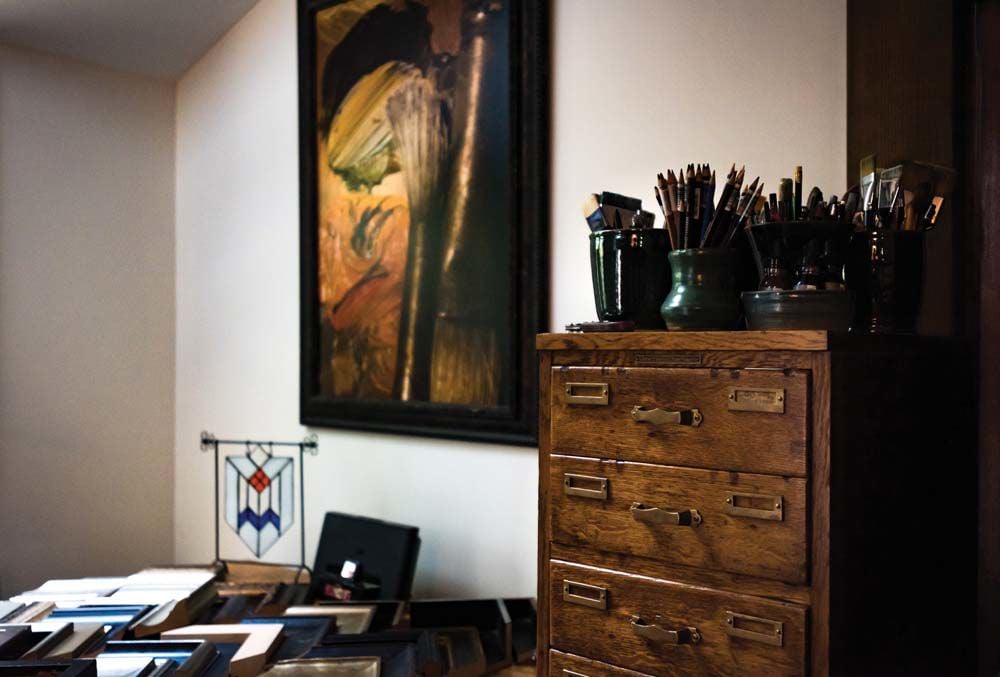 A look at Edwards’ home studio. 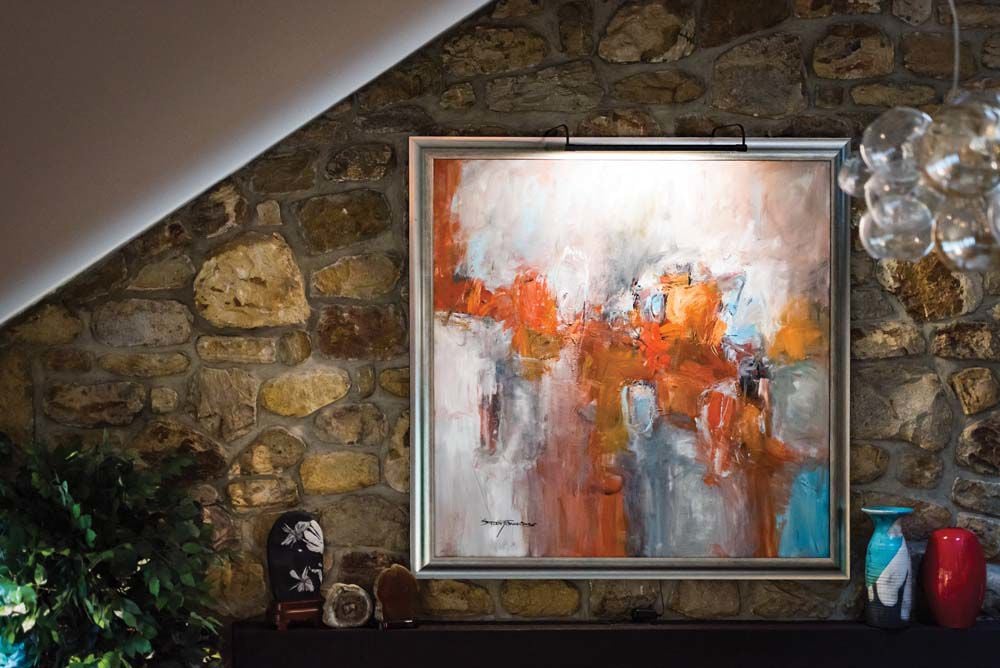 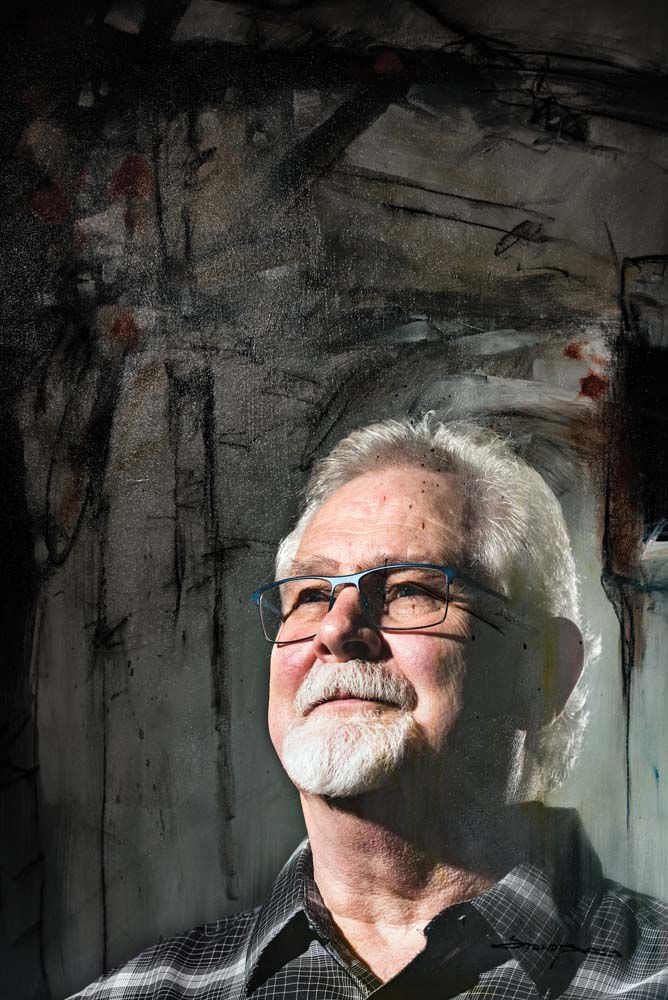 A portrait of abstract expressionist artist Sterling Edwards and his painting, "Fairbanks," made with two in-camera exposures.

A look at Edwards’ home studio.

A portrait of abstract expressionist artist Sterling Edwards and his painting, "Fairbanks," made with two in-camera exposures.

Sterling Edwards is home again. Not that he’s had much time to enjoy it. Edwards, an accomplished watercolor artist and sought-after instructor, travels all over the world to teach art. Despite his hectic schedule, it’s clear Edwards, 68, loves what he does.

“I spend half my time at airports, flying here and there, but when I get around students, we have a great time,” he says. “I get a lot of personal satisfaction out of that.”

Edwards does about 22 workshops a year, roughly one every other week, although he’s looking to lighten the load a little.

Edwards and his wife, Diane, recently moved back to the Winston-Salem area from Hendersonville, and have spent the time since settling in and setting up Edwards’ in-home art studio at their house in Lewisville. Diane, a former nurse, now runs Edwards’ business full-time.

She has her hands full: Edwards is in high demand. All of his workshops are booked for the next three years.

“I can’t complain because the business is doing quite well,” he says.

Edwards never imagined he’d be teaching and creating professionally. Although he first took up painting at age 12, he spent 20 years working in law enforcement.

“I always painted as a hobby,” he says. “I’ve been painting for over 50 years. Even when I was working as a firefighter and police officer, I had work in galleries.”

In 1985, Edwards attended an art show that would change his life.

“I saw someone doing watercolor painting,” he says. “It looked intriguing. I bought paints the next day.”

Edwards soon realized watercolor was a very different beast than the oil paint he was used to, so he sought help learning the medium. He took several instructional classes and soon mastered the basic fundamentals of watercolor. Around that time, he met Zoltan Szabo, a renowned Hungarian artist. He went on to study with Szabo for 16 years.

“He taught me a lot,” he says. “He coached me on how to make a business out of this and make a living as an artist.”

Edwards says he and Diane heeded Szabo’s advice — and it paid off.

He left law enforcement in 1993 and opened Sterling Edwards Fine Art Studio & Gallery on West End Boulevard in Winston-Salem. He paid the gallery’s rent with money he made from teaching watercolor classes on the weekends. At the time, he had no idea his passion project would soon turn into an international business.

Edwards says it’s not just his instruction that sets him apart — it’s his style, too.

“I mentor a lot of artists,” he says. “They have the interest, the desire, but they’re at a dead end and don’t know what to do with it, or they’ve reached the point where they want to take it to the next level. I like to tap into that potential.

“Watercolor is the toughest medium there is,” Edwards adds. “I have a specific style of painting and teaching that people can adapt to. It takes practice, it’s a different approach, but you see results pretty quickly.”

His own paintings range from abstracts to landscapes and florals.

“I use big-bristle brushes that I designed and invented,” Edwards says. “I do 80 percent of the painting using stiff, large brushes, then I come in toward the end with smaller brushes and do details.”

The use of big-bristle brushes, he says, is a trick he learned from Szabo.

Edwards says he’s looking forward to taking things a bit slower this year, and to growing his business closer to home. He’s working on large abstract pieces, and he’s hoping to get his work into more galleries and corporate collections.

Mostly, though, he’s excited to continue to make a statement with his art.

“I bought $25 worth of paper and paint. Never in my wildest dreams did I imagine I’d be at this stage in life,” he says. “I’m trying to show the world what I can do with abstract design.”