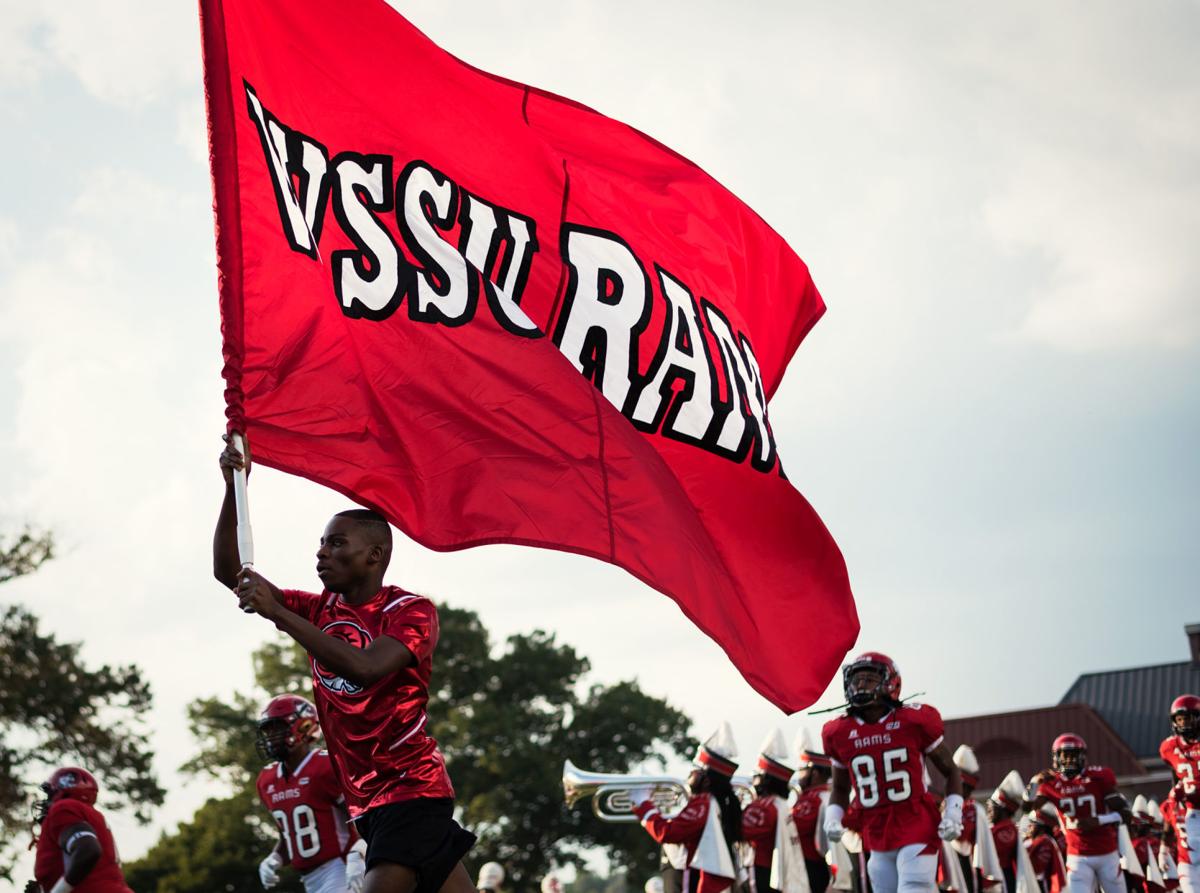 Winston-Salem State makes its entrance prior to a CIAA football game against Virginia Union on Sept. 22. 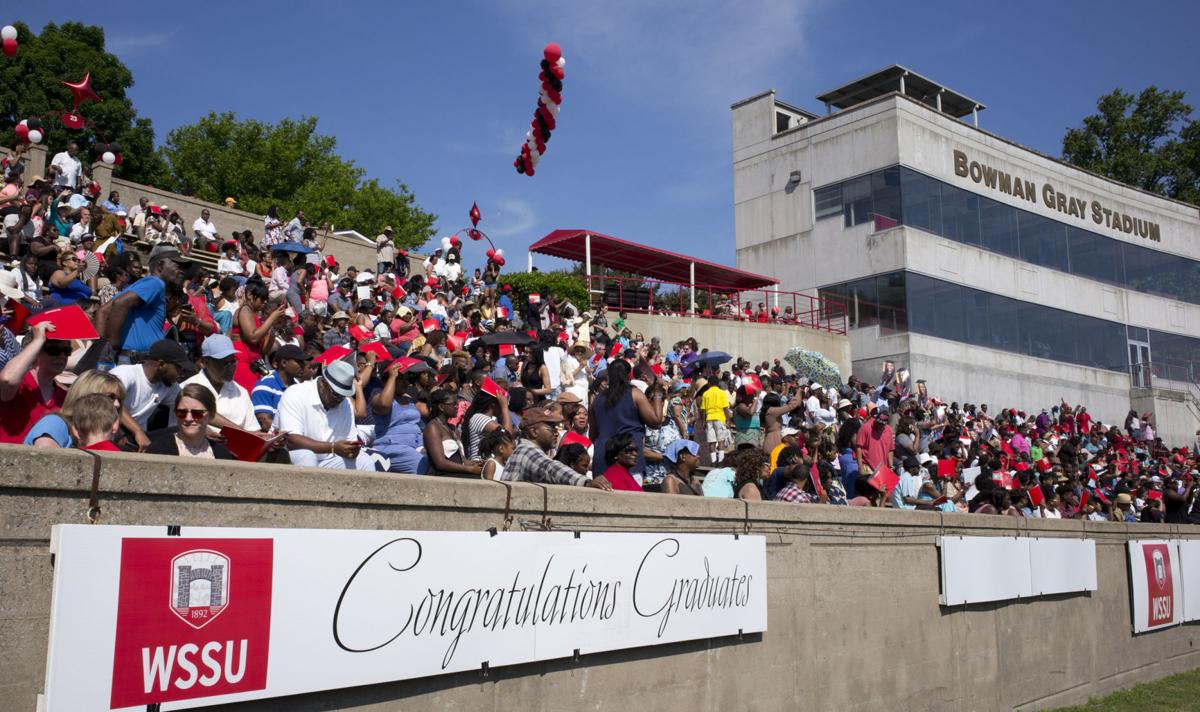 Family members filled the stands at Bowman Gray Stadium to watch the Winston-Salem State University commencement exercises in May 2017. 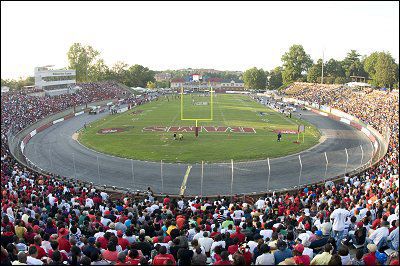 Winston-Salem State will continue to rent Bowman Gray Stadium for at least the next 20 years. The City of Winston-Salem will be investing $9 million into facility improvements over the next three years.

Winston-Salem State makes its entrance prior to a CIAA football game against Virginia Union on Sept. 22.

Family members filled the stands at Bowman Gray Stadium to watch the Winston-Salem State University commencement exercises in May 2017.

Winston-Salem State will continue to rent Bowman Gray Stadium for at least the next 20 years. The City of Winston-Salem will be investing $9 million into facility improvements over the next three years.

There was a definite feeling that Winston-Salem State’s football program won a game Wednesday afternoon.

But it wasn’t just any game.

It was a win when it comes to the never-ending saga that is Bowman Gray Stadium. The Rams have played their home football games at the stadium for more than 60 years, and now the city of Winston-Salem will give it a $9 million face-lift.

The announcement was made by Mayor Allen Joines and Chancellor Elwood Robinson of Winston-Salem State.

“This is a win-win-win situation,” Robinson said, referring to the city, WSSU and the summer racing series.

WSSU had designs on buying the stadium when the city decided to sell it in 2013, but after careful consideration, Robinson said the plan changed. In October, the school revealed a master plan that included building its own 6,000-seat stadium on campus. That won’t happen anytime soon, Robinson said.

WSSU now has a 20-year lease with the city. And there will be plenty of upgrades to the grass field, the two press boxes and the field house. There will also be improvements to the seating, bathroom and concession areas.

“This is big in terms of the fan experience,” Robinson said. “This will make way for more of a Ram feel to our games. This is something ($9 million) that doesn’t come around very often.”

Not everybody was excited to hear WSSU will no longer pursue ownership of the stadium.

Butch Wheeler, a prominent WSSU graduate in 1971 and a member of the Big House Gaines Hall of Fame, said the $9 million upgrades sound good but they come with baggage.

“When you see a gift horse you also know there’s something at the other end,” Wheeler said. “It’s almost too good to be true. We’re getting all this stuff for free, but what can we get out of it? We’ll never get parking (money), we’ll never get concessions, and how much of the gate do we get?

“I’m hoping we can at least get half of the concessions so they can use that for the school.”

When WSSU decided to start pulling together resources in an effort to buy the stadium, it turned to student athletic fees.

Those fees have now added up to just over $2 million. The school can now use that money for other improvements to its campus.

“It’s going to be the students who participate in where that money goes because it’s from them,” Robinson said. “They are going to have a say with a proposal to re-purpose those dollars and we’ll go from there.”

With the announcement of the upgrades in the stadium, Joines said the field will be named Rams Field at Bowman Gray Stadium pending approval of the city council.

Coach Kienus Boulware, who just finished his ninth season as a football coach at WSSU, said in his time at the school there hasn’t been much done to enhance the stadium.

“Everybody loves new things and there’s nothing more exciting than something like this coming down the pike,” Boulware said. “If we can have a little extra motivation to recruit harder and to talk about things like this, it’s only going to help us.”

The Rams finished 5-4 this season and have missed the CIAA Championship game the past two seasons. Robinson said an announcement of this magnitude comes at the right time.

“I think this can give the program a shot in the arm,” Robinson said. “When you think about the possibilities of what our fans can experience, it’s going to be something else.”

Robinson said he recently spoke with Commissioner Jacquie McWilliams of the CIAA and brought up the idea of the conference bringing its football championship game to Bowman Gray Stadium.

WSSU will continue to rent the stadium from the city, which it has done since the 1950s. But the way Robinson sees it, the stadium will soon look and feel more like an on-campus facility.

“This will make our relationship with the city that much stronger,” Robinson said. “I don’t think we’d ever get to this point with this amount of investment but it does speak to how the city feels about Winston-Salem State.”