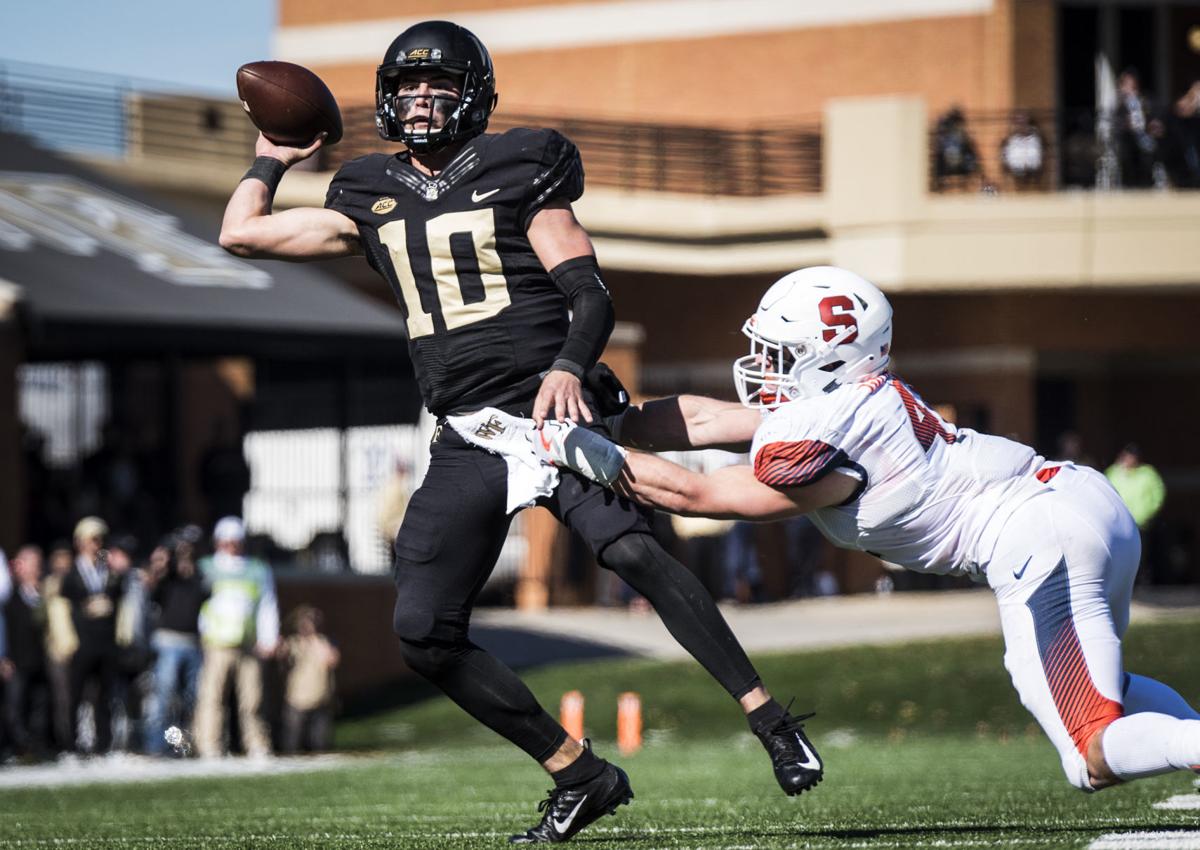 Wake Forest freshman quarterback Sam Hartman, here passing as he is tackled by Syracuse senior linebacker Ryan Guthrie on Saturday, will miss at least the Deacons’ next three games with a leg injury. 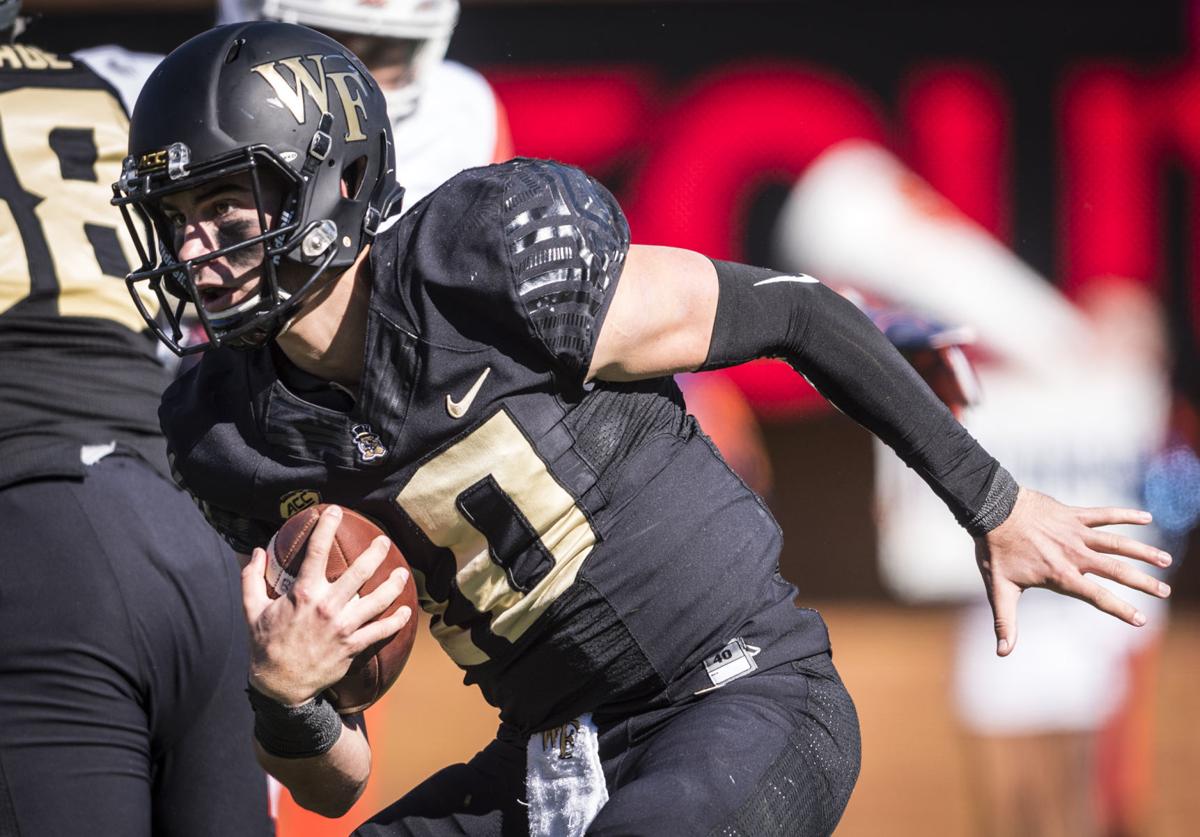 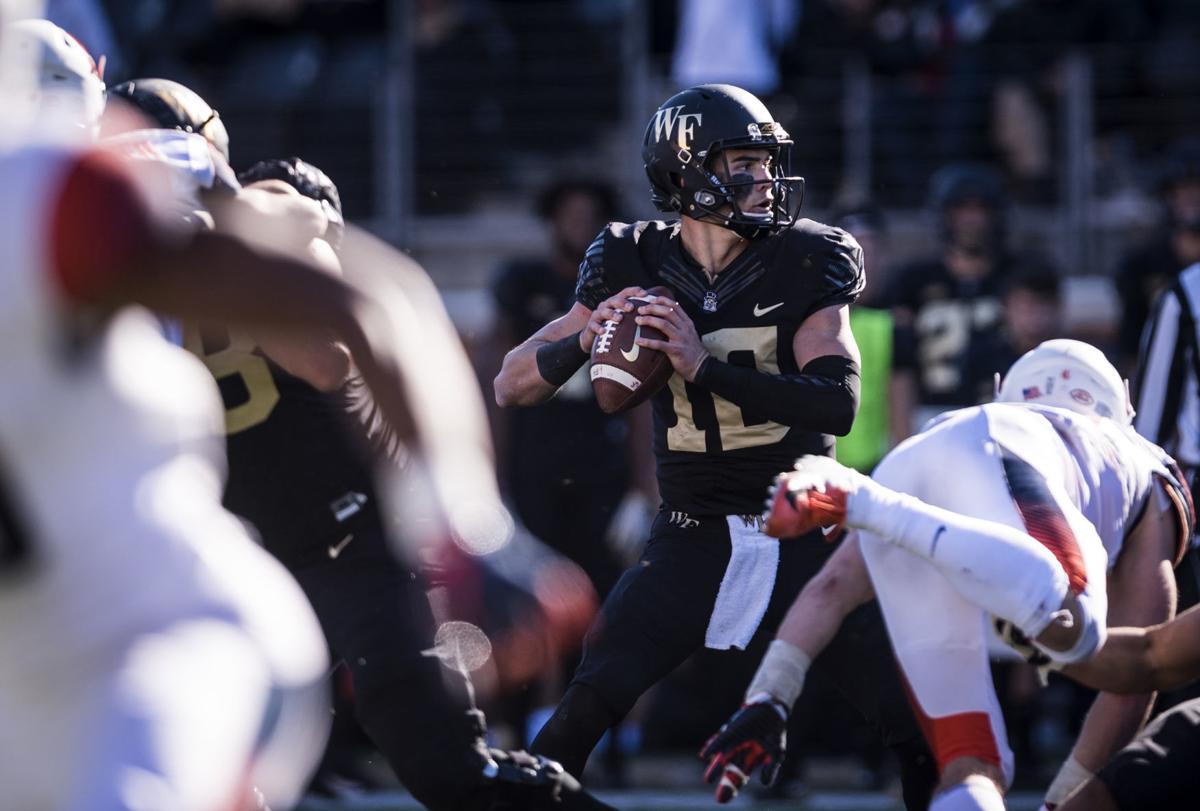 Wake Forest freshman quarterback Sam Hartman, here passing as he is tackled by Syracuse senior linebacker Ryan Guthrie on Saturday, will miss at least the Deacons’ next three games with a leg injury.

Wake Forest’s season-long trend of crippling injuries continued Sunday with the news that freshman quarterback Sam Hartman will miss the rest of the season with a leg injury.

Hartman appeared to suffer the injury on one of the final plays of Saturday’s 41-24 loss to Syracuse.

On a second-and-goal play from the 9-yard line with 1:30 left, Hartman was hit simultaneously by two Syracuse defenders — the first low by defensive end Alton Robinson, the second high by defensive tackle Chris Slayton. Hartman appeared to favor his right leg for the final three plays — holding was called on the play that Hartman took the hit. On the last play of the game, Hartman ran a few steps to the right and fell down without contact.

Hartman tried to jog off the field, but appeared to be favoring his right foot or leg. He gingerly walked to the sideline, where Wake Forest’s training staff started examining him.

Wake Forest’s release says that Hartman will miss “remainder of the 2018 regular season,” leaving open the possibility that he could return for a bowl game. To gain bowl eligibility, the Deacons have to win two of the last three games, which are at N.C. State on Thursday night, home against Pittsburgh on Nov. 17 and at Duke on Nov. 24.

The news that Hartman suffered a leg injury that will cost him at least the final three regular-season games came less than 24 hours after Coach Dave Clawson reiterated that Hartman was the Deacons’ quarterback.

“We’re putting way too much pressure on him right now. As he goes, we go,” Clawson said. “And that’s a heck of a load for a freshman quarterback to carry when you’re not playing well on defense. ‘Hey Sam, you’ve gotta lead us to a victory and by the way, we’re probably going to have to score 35 to 42.’

The news release from Wake Forest says that the Deacons will have four quarterbacks available to play in Thursday night’s game at N.C. State. They are: Kendall Hinton, Jamie Newman, Tayvon Bowers and Matthew Considine, a walk-on.

Newman appears to be the likely starter, though that will probably be ironed out in practice during the next few days. The redshirt sophomore from Graham lost a fall-camp battle for the starting job with Hartman after he suffered a groin injury, and has seen spotty work this season. He played against Notre Dame and Florida State, completing 7 of 15 passes for 65 yards and an interception. Newman ran for 73 yards and a touchdown against Notre Dame, but was held to minus-3 rushing yards against Florida State.

Hinton would have entered fall camp as the starter if not for a three-game suspension to start the season. Because of his suspension, which was for a violation of team rules, he was moved to slot receiver and returner, while maintaining a role as a backup quarterback. He has been unavailable in recent weeks because an ankle injury and, more recently, a hip injury suffered last week.

“Kendall’s hurt again. We gave Kendall (jersey) No. 5 today because we were going to get him more involved with special teams, and there were going to be chances that him and Cam Glenn could have been on the field together, and he was cleared to practice Tuesday and he got hurt, a new injury,” Clawson said after the loss to Syracuse. “So he had an ankle injury last week, and then he has a hip flexor now.

“Again, sometimes when it rains, it pours. So, we’ll see if we can get enough guys who can suit up for Thursday.”

Bowers is a redshirt freshman who has played in one game for Wake Forest. Considine played at the end of Clemson’s blowout win at Wake Forest on Oct. 6, but didn’t complete either of his two passes.