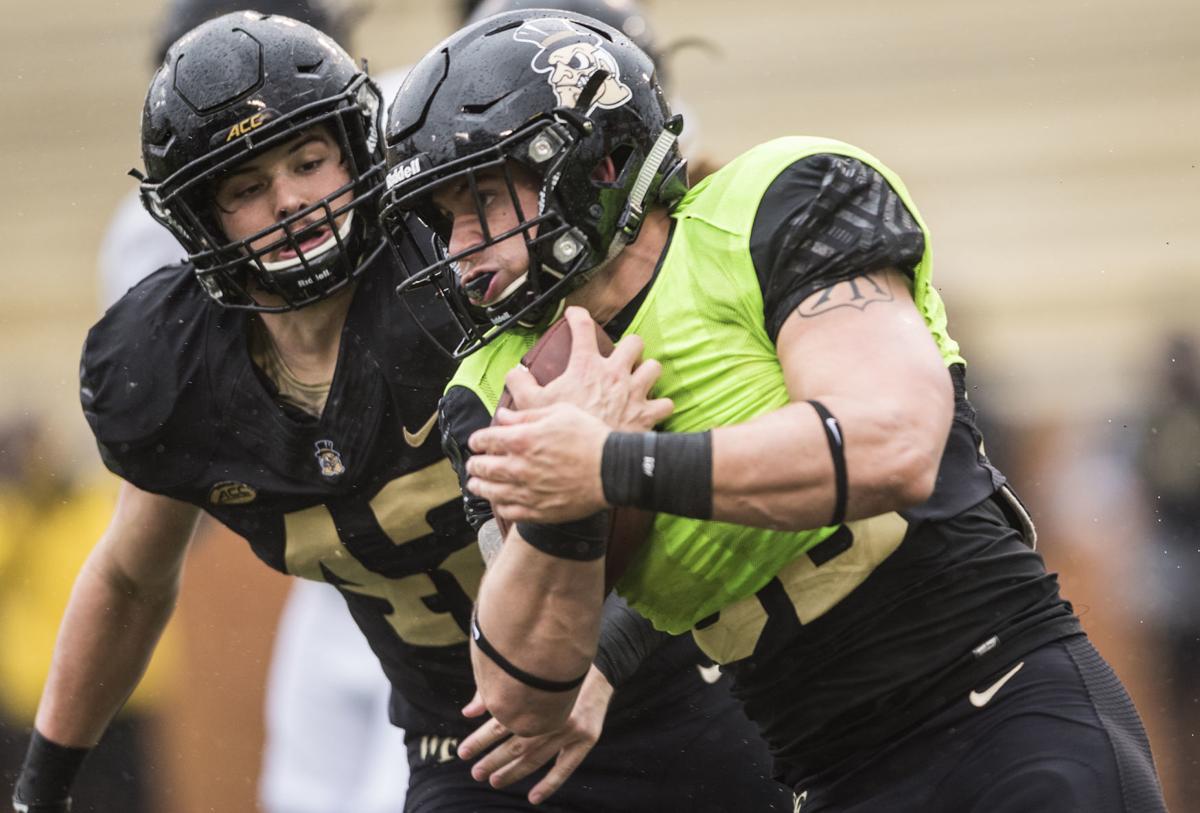 Wake Forest running back Cade Carney (36) is returning from an injury in 2017. 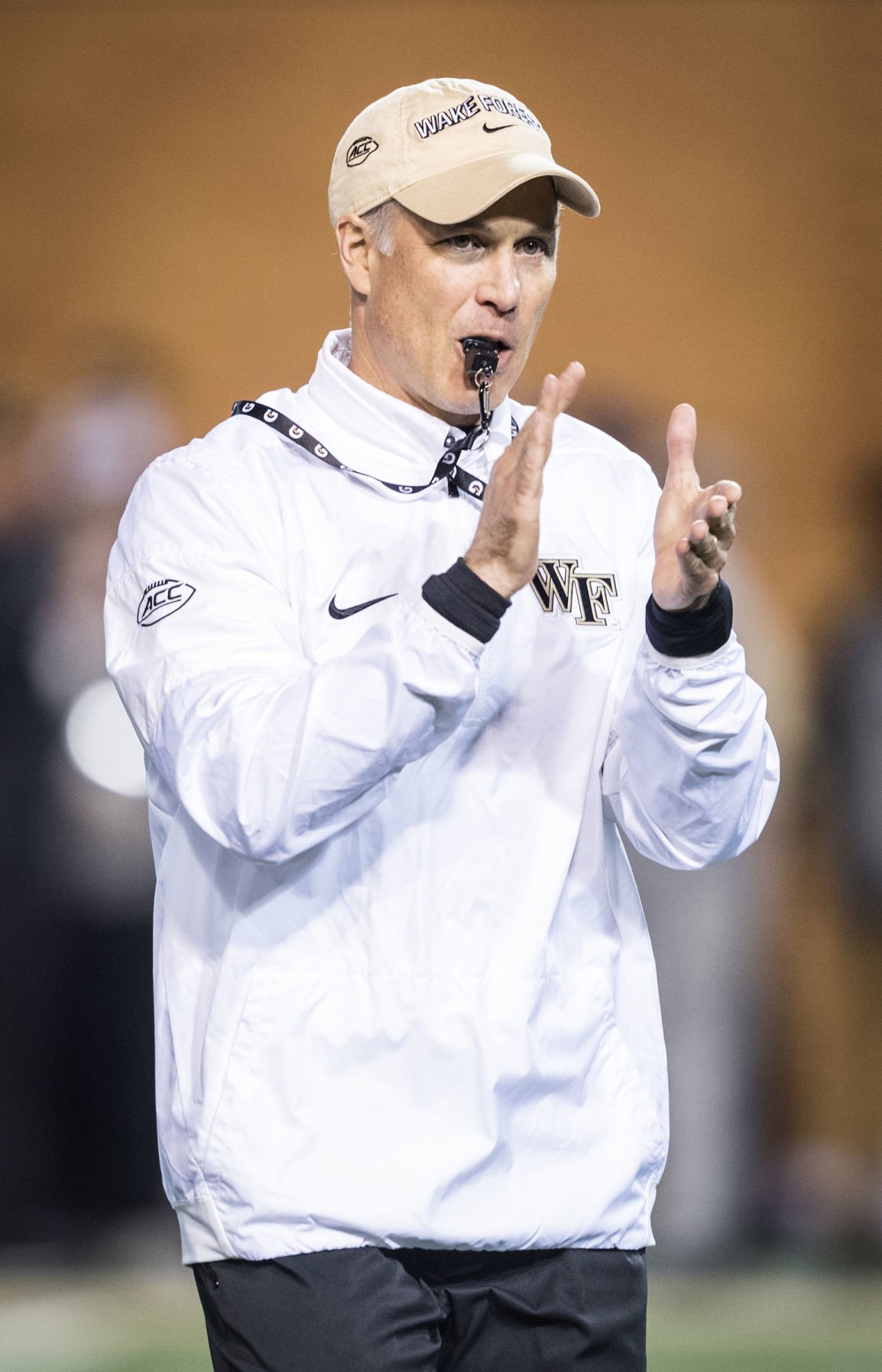 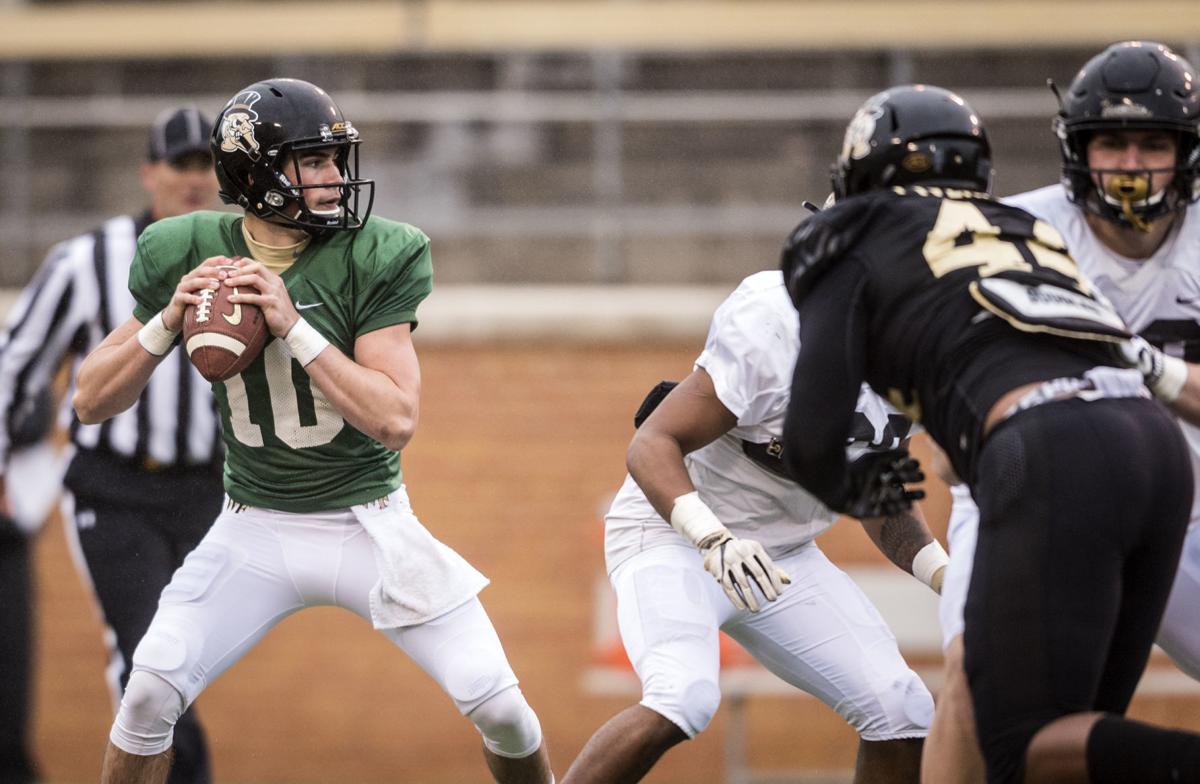 Either Sam Hartman (10) or Jamie Newman will start at quarterback for Wake Forest while Kendall Hinton serves his three-game suspension.

Wake Forest running back Cade Carney (36) is returning from an injury in 2017.

Either Sam Hartman (10) or Jamie Newman will start at quarterback for Wake Forest while Kendall Hinton serves his three-game suspension.

Wake Forest’s football team will practice 24 times in the next 29 days, starting with Wednesday morning’s leap into the season, leading up to the opener against Tulane on Aug. 30.

In other words, the Deacons are on the verge of starting a much-anticipated season. It’s Dave Clawson’s fifth as the coach of the Deacons, and his staff returns in full. He’ll have a new quarterback running coordinator Warren Ruggiero’s offense, and there likely will be more than one starter at the position, given Kendall Hinton’s suspension for the first three games. But Wake Forest returns its entire offensive line, game-breaking receivers and a running backs stable that features three game-breaking players. The defense faded last season and lost half of its starters, but appears poised to find adequate replacements.

So here are 10 storylines to follow for the next month:

This would’ve been on the list before the news of Hinton’s suspension. Jamie Newman and Sam Hartman would be competing for the No. 2 spot, and Hinton would need to show improvement in the short-to-intermediate passing range from the spring. The suspension means Newman and Hartman will battle for the starting spot, and Hinton has to sharpen his game while taking mostly second-team reps in camp and for the first three weeks.

As many as six players could be Wake Forest’s kicker in the first game. It figures to be an open competition between Zach Murphy, Nick Sciba, Ben Brown, Eric Osteen, Darren Ford and possibly Dom Maggio, if he’s able to punt and kick while staying healthy. Murphy, a redshirt freshman walk-on from Raleigh, was the best kicker in the spring. Sciba, an early enrollee, is a talented kicker who needed to translate his talent from live-action sequences in the spring to the field in the fall. Brown is a walk-on who lost reps as spring practices went on. Ford and Osteen are grad transfers — Ford made 25 of 38 field goals in his career at Division III Hope College, while Osteen was a kickoff specialist at Army and has completed a five-year tour of duty.

What’s known is that Justin Strnad will start at one of the linebacker positions, and so will Demetrius Kemp. The variations multiply from there. DJ Taylor emerged from a crowded group of linebackers in the spring, and one iteration could be that Taylor starts in the middle, Strnad on the outside and Kemp at rover. Or Strnad in the middle, Kemp on the outside and Ja’Cquez Williams at rover, if that’s a better scenario. Could Nate Mays, Jeff Burley or Jake Simpson emerge and take Taylor’s spot, or the outside spot and shift Strnad inside? Could incoming freshmen JaCorey Johns and Ryan Smenda factor into the equation?

Losing the five starters from last season’s defense will hurt from a productivity standpoint, but the impact might be further felt if the Deacons can’t replace their leadership — namely that of Wendell Dunn and senior linebackers Grant Dawson and Jaboree Williams. Fifth-year senior defensive tackles Willie Yarbary and Zeek Rodney are obvious candidates to become vocal leaders, as is classmate Cameron Glenn in the secondary. Senior Chuck Wade, who’s moved to safety, provides more leadership on that side of the ball.

This is the non-Hartman category, as he’s one of two candidates to start in football’s premium position. This is about whether tight end Blake Whiteheart, defensive tackle Kelijiha Brown, offensive lineman Michael Jurgens, cornerback Zion Keith, safety Nasir Greer or Sciba, at kicker, can crack the two-deep or play significant snaps. The best bets are Whiteheart, who’s at a position also hit by suspension (Thomas Cole), and Keith, who provides depth at what was a thin position last season.

The stellar performance of Matt Colburn II in the second half of the season covered up for what was a razor-thin running backs corps. Now Cade Carney returns healthy, as do other Deacons who missed chunks of last season like defensive back Traveon Redd and, to a lesser extent, starting cornerback Amari Henderson. Getting Carney and Henderson at full strength is a significant boost.

Ah yes, then there’s the healthy return of Dortch. The slot receiver who exploded as a redshirt freshman was a full participant in spring practice, so his healthy return has kind of happened. But his impact was such in eight games — 53 catches, 722 yards, nine touchdowns and average of 161.3 all-purpose yards — that it’s worth mentioning again that Dortch will be back on the field in full capacity in fall camp.

Clawson spoke at length last season after the Syracuse win that players in their third years in a program tend to take leaps in terms of development. Evidence was there in wide receivers Scotty Washington and Alex Bachman, offensive lineman Jake Benzinger, Strnad, Henderson and Colburn. So who will be the breakout third-year players this season? Frontrunners are defensive end Boogie Basham, safety Luke Masterson, rover Ja’Cquez Williams and defensive tackle Sulaiman Kamara. Oh, and Dortch is entering his third year in the program.

9. Last hurrah of the Beef Boyz

If John Wolford was the driver of Wake Forest’s offensive surge last season, the engine was the offensive line. And that engine, in the form of five returning starters, is a well-oiled machine that figures to keep the momentum rolling. From left to right, Justin Herron, Phil Haynes, Ryan Anderson, Patrick Osterhage and Benzinger form the best offensive line in the ACC. The first four are fifth-year seniors, some of whom started for an anemic offense in 2015 and are embodiments of the growth of this program since Clawson took over.

Last and probably most important, Wake Forest needs to come out of fall camp without major injuries. Spring practice already cost the Deacons, in all likelihood, the seasons of Arkeem Byrd and Tyler Bell. Clawson and his staff have recruited and developed a roster to the point that the Deacons have more depth than they’ve had in the past four seasons — but it’ll be best if that doesn’t get tested weeks before playing a meaningful game.