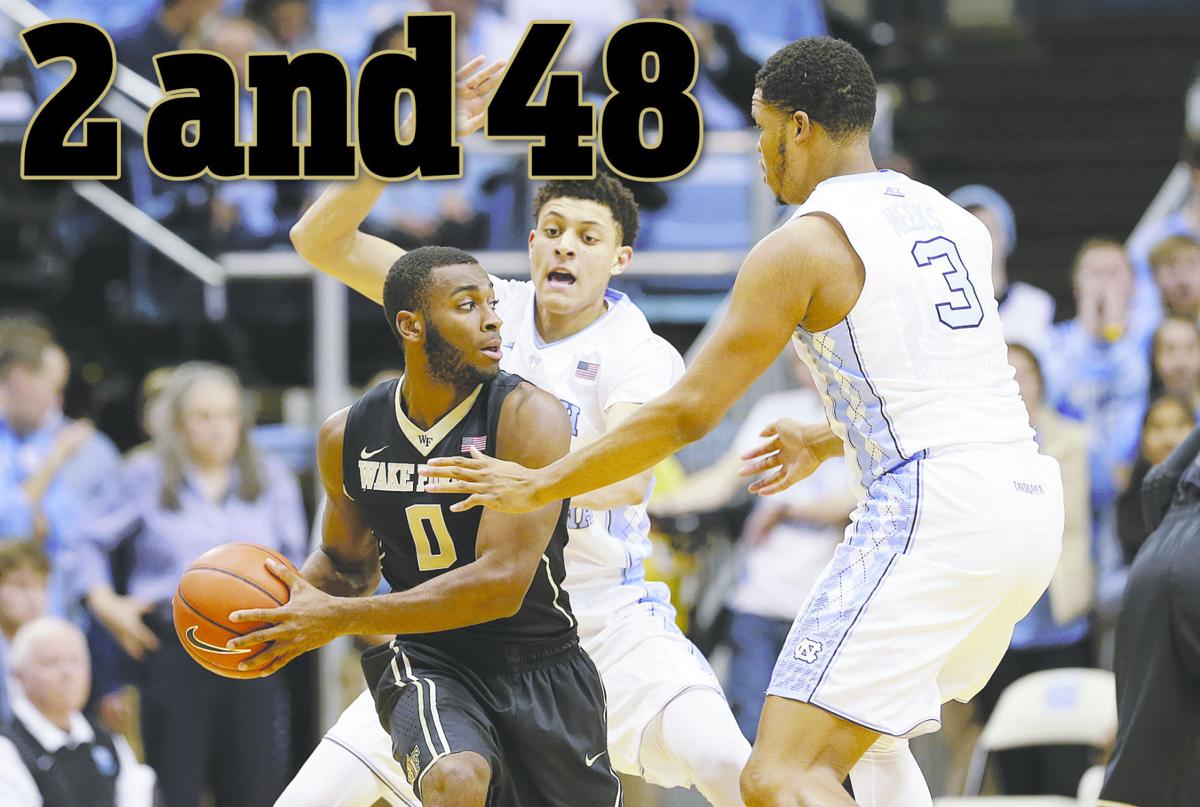 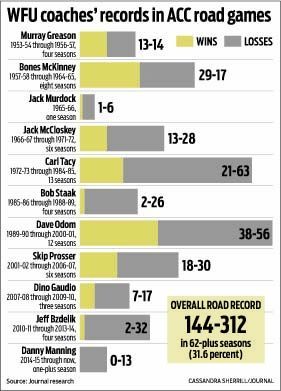 Everyone knows it’s hard to win basketball games on the road in the ACC.

No team knows it better than Wake Forest, which will try to do just that starting at 1 p.m. today when it takes on No. 25 Notre Dame in South Bend, Ind.

Just to make it to and home from their last 50 conference road games, the Deacons (10-10, 1-7 ACC) have traveled around 33,000 miles. Considering the circumference of the globe is roughly 25,000 miles, they could have gone around the world once and, if headed east, been well past sophomore Dinos Mitoglou’s hometown of Thessaloniki, Greece, a second time.

Regardless, it’s safe to say that over that 2-48 stretch, the trips to the destination have been far more fun than the journeys home.

“It’s just the ability to overcome adversity,’’ assistant coach Randolph Childress said. “You just have to in this league. It’s just tough to win on the road in general, and we all know that.

“At this point in time, it doesn’t matter who or where. Tough games are just tough. But for us, it’s just a matter of overcoming adversity.”

The ACC doesn’t keep such records of futility. Neither, understandably, do the schools themselves. But a careful combing of the back pages reveals that 2-48 is the worst road record over a 50-game stretch in conference history.

Clemson won only one of its first 37 ACC road games but got it together in time to pull out four of the next 13 for a 50-game mark of 5-45. The Tigers did lose their first 28 road conference games, which is a record of their own — at least for the time being.

“You go on the road and you have a lot of different adversity that just pops up, whether it’s just the comfort for the home team, playing in their own gym with their support and their crowd behind them,” coach Danny Manning said.

“But that’s par for the course. You always have to play your fair share of games on the road, regardless of what sport you’re playing and that’s where we’re at right now.”

The road woes were waiting on Manning when he took over the program in the spring of 2014. The streak began with Dino Gaudio losing his final three conference road games — at North Carolina, Georgia Tech and Virginia Tech — at the tail end of the 2009-10 regular season, shortly before he was replaced by Jeff Bzdelik as head coach.

Bzdelik was 17-51 against ACC competition, with 15 of the victories coming at home.

The victories at Boston College and Virginia Tech were his only two away from Joel Coliseum in 34 tries, for a mark of 2-32.

Manning’s teams, save for the grisly 94-51 pounding at Duke last March, have generally been more competitive on the road than were those of Bzdelik — who lost by at least 15 points 23 times. Only twice were Bzdelik’s Deacons closer than five points when the final buzzer sounded, both times in 2012-13 when they lost at Virginia Tech 66-65 and at Boston College 66-63.

The Deacons under Manning, in contrast, have lost by at least 15 points only three times.

It also bears noting that they’ve had a real shot at winning five of the 13 road conference losses, only to come up short four times last season (86-83 in overtime at Syracuse, 59-57 at Clemson, 82-76 in overtime at Florida State and 61-60 at Virginia) and one time this season (93-91 at Virginia Tech).

Manning said his 0-13 road record against conference teams doesn’t weigh on him, and won’t until he has a chance to rebuild the program through recruiting.

“It doesn’t weigh on me from the sense, this is my second year,” Manning said. “That’s it. I understand that, for us, it’s a process. We’ve got one recruiting class in here that we had a full, legitimate chance to recruit. The first class we got, it was very good for us, but we got lucky with that class because we weren’t here. I took the job at the Final Four, so our assistants were able to come up with some guys to help us out.

“We’re still going out and we’re going to battle, but it will be more telling as we get different recruiting classes in here.”

Childress said the qualities of good road teams are self-evident.

Talent is the most obvious ingredient. It also helps to make free throws in clutch situations, and the Deacons are a notoriously poor foul-shooting team. But the real damage is done by turnovers, particularly in live-ball situations.

“You let the basketball plays kind of fall within themselves, but you just can’t turn the ball over.”

Nothing begets success like success, and the Deacons feel confident that once they break through on the road, there will be other successes in hostile arenas to follow.

“Once you’ve had some success and you’re able to get over that hurdle, then you know you can do it,” Childress said. “And then it’s behind you. You’ve got to live in the moment. That’s just part of what you need to do, and have the younger players grow up and understand it.”