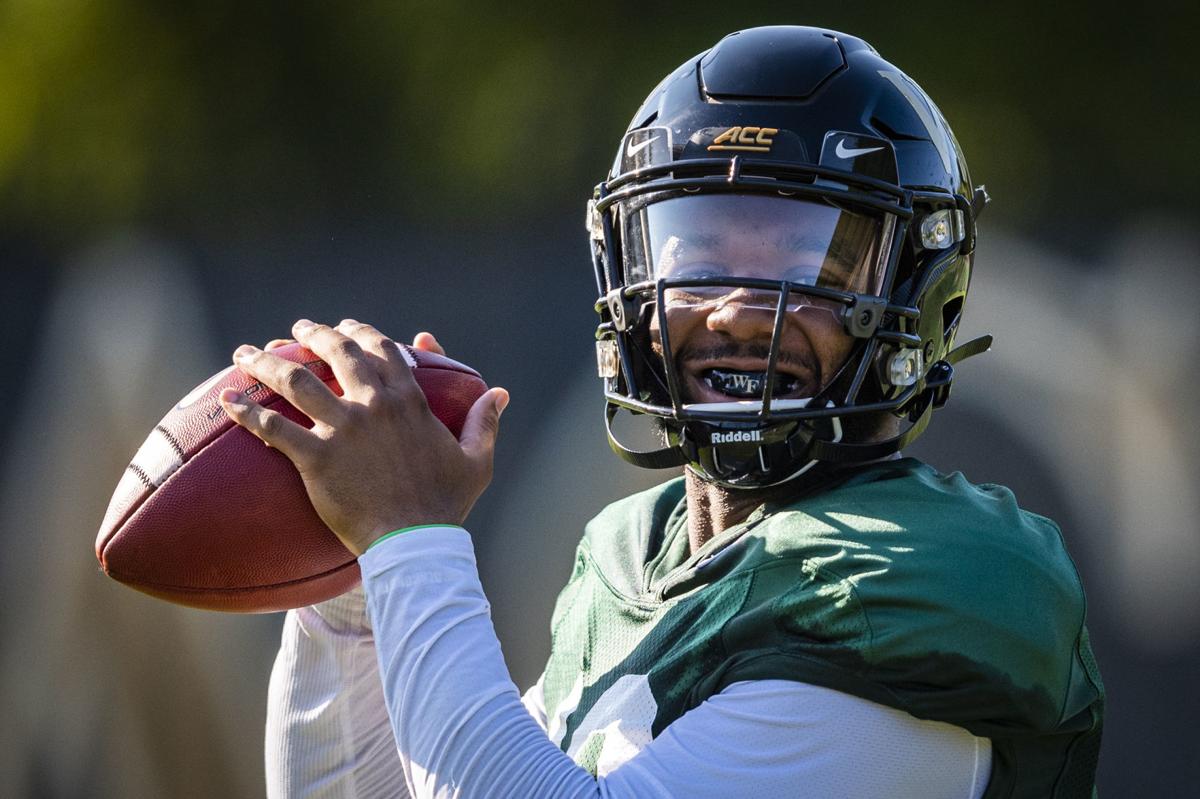 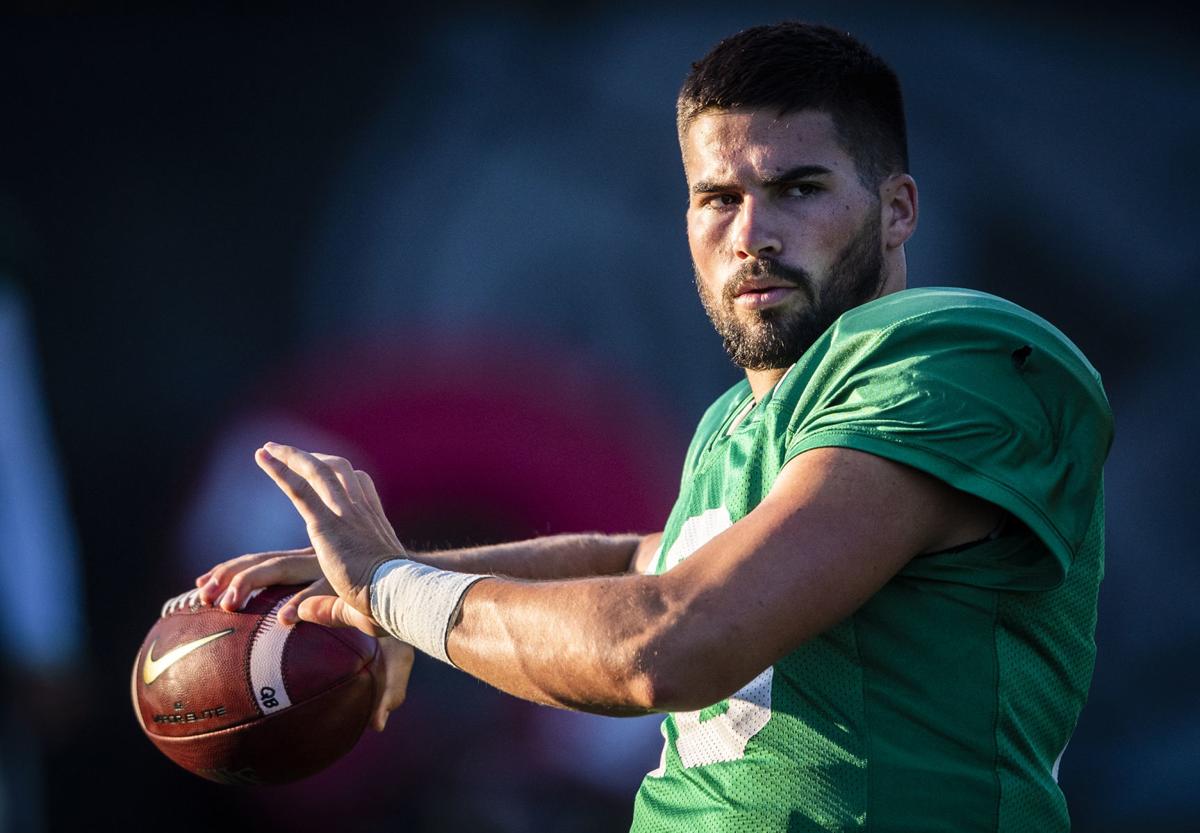 Wake Forest quarterback Sam Hartman threw for 146 yards and one touchdown and ran for 38 yards and a touchdown in Monday night’s scrimmage. 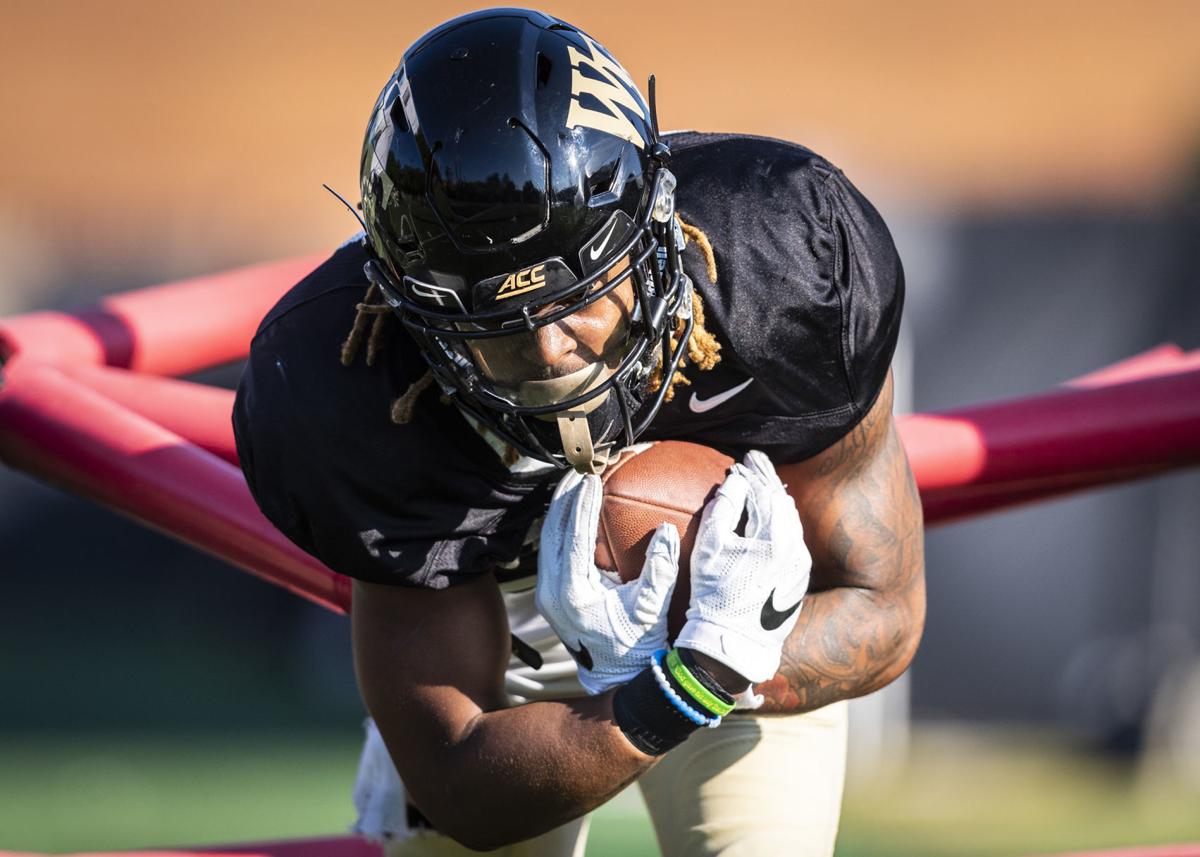 Running back Christian Beal-Smith had a 26-yard run Monday during Wake Forest’s scrimmage at BB&T Field.

Wake Forest quarterback Sam Hartman threw for 146 yards and one touchdown and ran for 38 yards and a touchdown in Monday night’s scrimmage.

Running back Christian Beal-Smith had a 26-yard run Monday during Wake Forest’s scrimmage at BB&T Field.

Under the lights at BB&T Field for the first time during fall camp, the intensity was ratcheted up a few notches for Wake Forest’s football team, and its quarterbacks — both of them — looked sharp.

Jamie Newman and Sam Hartman both threw for 146 yards and accounted for two touchdowns Monday in the first of the Deacons’ two scrimmages.

“I have to watch the film. There’s the cliché,” Coach Dave Clawson said of evaluating his quarterbacks. “They’re both playing better than they were a year ago. We have two quarterbacks right now that are better than any quarterback we had a year ago, and that’s a compliment to both of them.

“If either of them had played this way in preseason camp last year, it would’ve been an easy decision.”

Newman took the field with the first-team offense, which didn’t take much time to get rolling. Christian Beal-Smith — senior Cade Carney didn’t suit up — had a 26-yard run on the first play, the Deacons converted a third down, and then on the fifth snap of the scrimmage, Newman connected with Sage Surratt for a 34-yard touchdown pass.

Surratt had four catches for 104 yards, both leading the Deacons.

“I think everybody’s intensity level was raised, you know, scrimmage time, being live,” Surratt said. “I mean, you always want to start fast and score early, I thought that was good for us. Just trying to bring some energy to the first (scrimmage).”

Hartman threw the only interception of the night. On third-and-6, Hartman’s pass was deflected by redshirt freshman cornerback Kenneth Dicks III and picked off by linebacker Ja’Cquez Williams.

“I think they both looked sharp and, at times, maybe forced things,” Clawson said of Newman and Hartman. “… Without watching the film, it’s hard to jump off of any ledge and say where they are right now.”

There were players in the scrimmage that film review isn’t necessary for, though.

Isaiah Isaac, trying to carve out his place in the pecking order of slot receivers, had two touchdown catches. The first was a 22-yard catch-and-run on a bubble screen from Newman, the redshirt freshman accelerating down the sideline. And the second touchdown was a 21-yard catch from an on-the-run Hartman, with Isaac finding a soft spot in the coverage and Hartman finding him near the goal line.

Kenneth Walker, the freshman running back, is the other young offensive standout from the scrimmage — and really, the first 12 days of fall camp.

Walker had 84 yards and 15 carries and added a 33-yard catch on a shovel pass. With Carney on the sideline, Walker was given ample opportunity to play with the first- and second-team offensive units.

“Kenneth Walker is having a really good camp. I think he’s starting to play his way into probably a guy that will play for us and not redshirt,” Clawson said.

Sacks were recorded by Ja’Corey Johns, Manny Walker, Will Smart and Shamar McCollum, while Amari Henderson and Isaiah Essissima had the only pass break-ups of the night.

Clawson was, however, bothered by the lack of sure-tackling.

“We’ve got to work on tackling. I don’t think we tackled really well on defense tonight,” Clawson said. “It’s the first scrimmage and the first time we’ve really done a lot of live tackling, so it’s somewhat to be expected.”

In addition to Carney not suiting up, left tackle Justin Herron, defensive end Boogie Basham, linebacker Justin Strnad and cornerback Essang Bassey were all limited in practice. Clawson said the reason for that was twofold — to give breaks to players who are known commodities and to evaluate the players behind them.

Clawson provided injury updates on two important pieces who haven’t practiced much in the last week: redshirt sophomore defensive tackle Tyler Williams will be out for the next two weeks with a knee injury and considered questionable to play in the opener against Utah State but probable for the following week against Rice; and senior slot receiver Kendall Hinton has tightness in his hamstring, but is expected to return to practice Thursday.