John Holleman IV (69) started on the pole in the first 50-lap Modified race Saturday night at Bowman Gray, which was his debut in the division.

John Holleman IV is spun out in turn 2 during his first Modified Series race Saturday at Bowman Gray.

Brandon Ward races to the win in the first 50-lap Modified Series race. 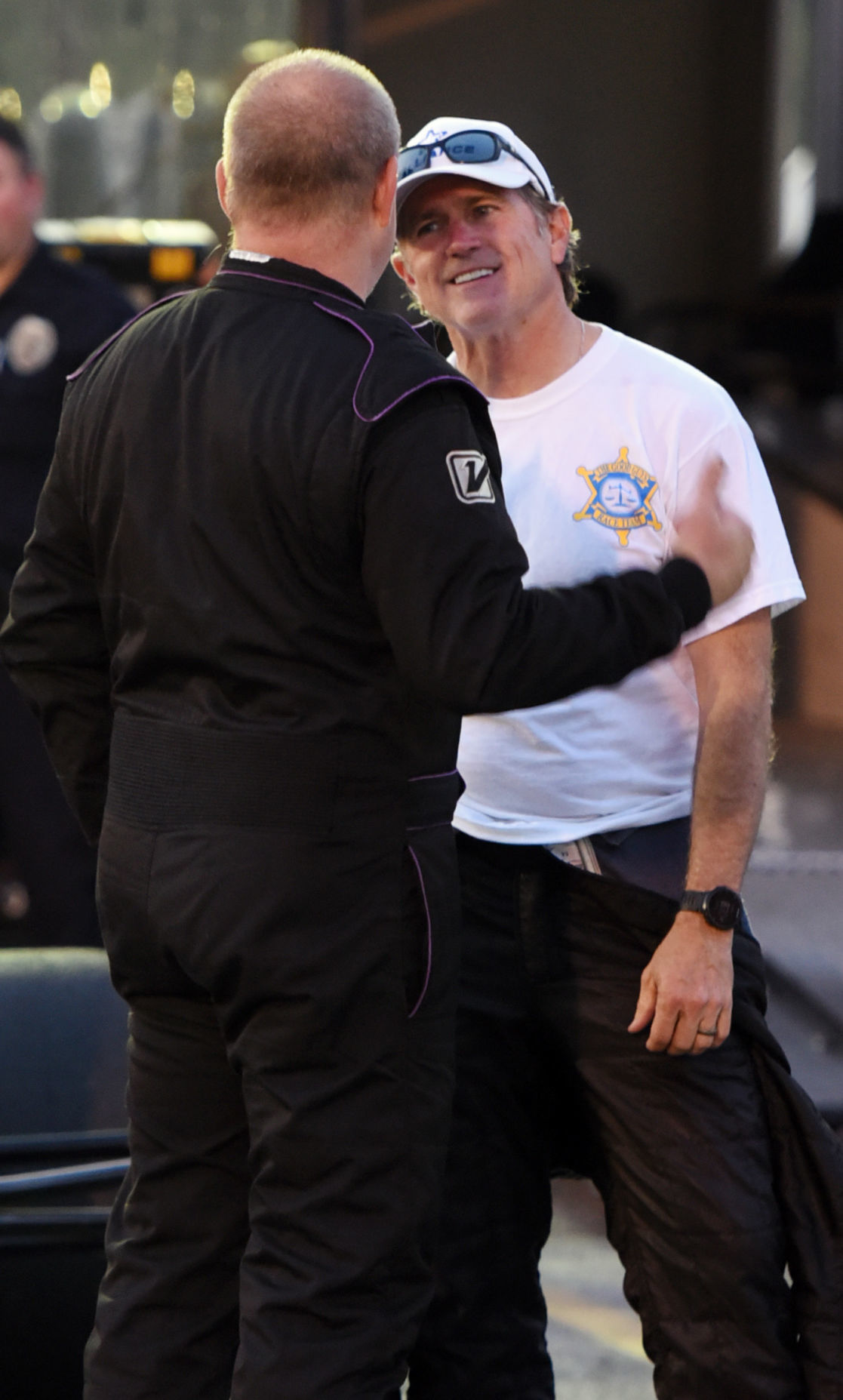 Bobby Labonte talks with Lee Jeffreys in the pits before a night of racing Saturday night at Bowman Gray. 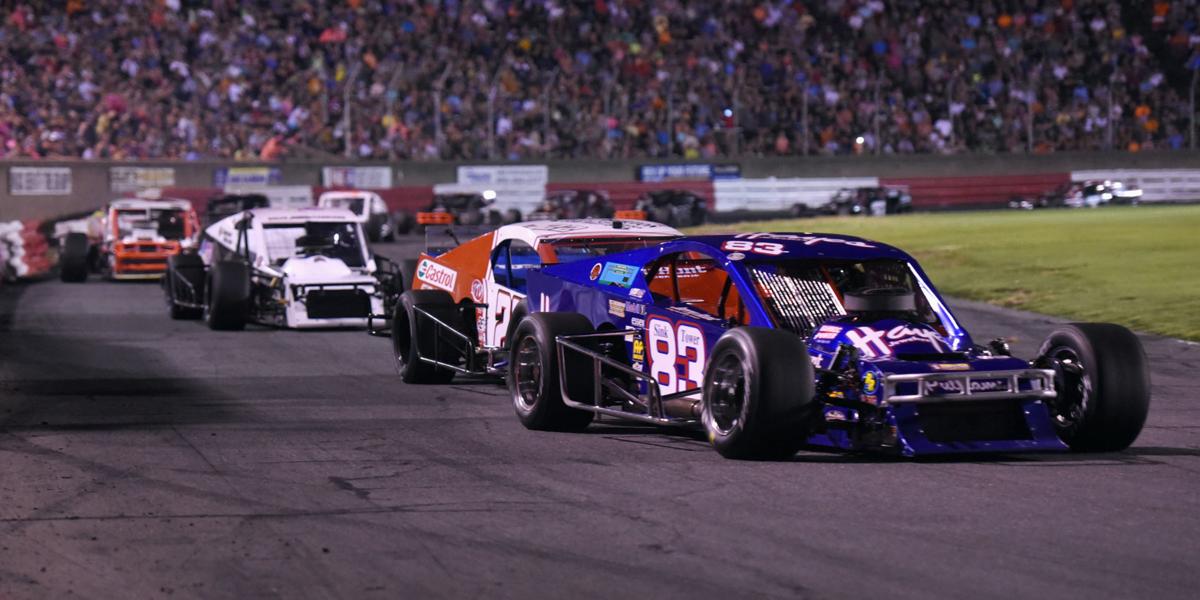 Tim Brown races to a second-place finish in the first 50-lap Modified Series race Saturday at Bowman Gray. Brown is also in second place in the points standings, seven behind leader Burt Myers with the 150-lap finale left. 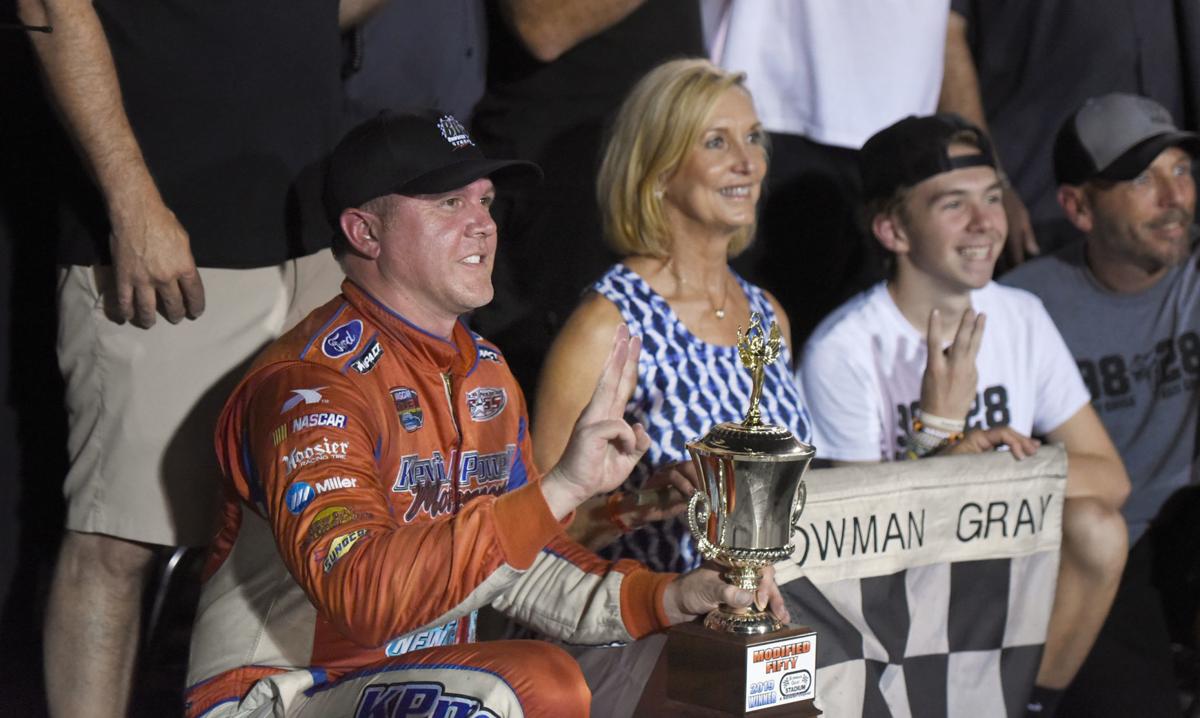 Brandon Ward races to the win in the first 50-lap Modified Series race on Saturday, August 10.

John Holleman IV (69) started on the pole in the first 50-lap Modified race Saturday night at Bowman Gray, which was his debut in the division.

John Holleman IV is spun out in turn 2 during his first Modified Series race Saturday at Bowman Gray.

Brandon Ward races to the win in the first 50-lap Modified Series race.

Bobby Labonte talks with Lee Jeffreys in the pits before a night of racing Saturday night at Bowman Gray.

Tim Brown races to a second-place finish in the first 50-lap Modified Series race Saturday at Bowman Gray. Brown is also in second place in the points standings, seven behind leader Burt Myers with the 150-lap finale left.

The Modified Division at Bowman Gray always provides plenty of drama, but when twin 50-lap races are in play it gets even more ramped up.

Racing Saturday night in the penultimate week before next week’s season finale, drivers were gearing toward winning the races, but maybe more important, positioning themselves for the 150-lap race next week.

Brandon Ward picked up his third win in the first race, and Jonathan Brown, who was suspended and fined $1,000 last week by NASCAR for an on-track racing altercation with driver Jason Myers, won the second race. In addition, Bobby Labonte, a 2020 NASCAR Hall of Fame inductee, made his debut Saturday night at Bowman Gray in the Modified Division.

But even all that might have been overshadowed by the Modified debut of John Holleman IV, who is a regular in the Sportsman Division.

Holleman raced in the No. 69 owned by Junior Miller, who won five Modified championships and 74 races, and qualified fourth for the first 50-lap race.

“Junior Miller and my dad and me have been in talks for the last two years,” Holleman said “And it was about a year ago, maybe a little bit more than a year ago, Junior got a hold of us and he said, ‘Man, I really want you guys to run my car and keep carrying on the 69 tradition.’”

The top six drivers redrew for the pole and Holleman drew first. Ward started second and took the lead in the fifth lap. Holleman regained the lead with 12 laps left.

“It felt pretty awesome,” Holleman said. “I was setting a good pace, driving defensive a little bit. I gave Brandon a pretty good shot early in the race and I let him save it. And I believe he tried to let me save it, but he was getting pounded from behind too.”

Ward regained the lead with seven laps left after Holleman spun out around turn 2. Ward had a great restart after the caution and held off nine-time Modified champion Tim Brown for the win.

“(Holleman) gave me a few shots and was able to gather it back up,” Ward said. “The next restart, he got a run and got around me on the outside, really got away from me five or six car lengths and we had a good enough car and ran him back down.”

Holleman finished 18th after he spun out late the race.

“We got to him. He was on the breaks pretty hard, doing what he’s supposed to do,” Ward said. “That’s what you’ve got to do with these Modifieds. He did a great job tonight.”

Even though Ward won his third race of the season, he’s in sixth place in the points standings, 103 points behind leader Burt Myers. Myers leads Tim Brown by seven points and third-place Jame Civali by 27.

“We’ve got one more week and we’ve won that 150-lapper a couple times already,” Ward said. “I feel like we’ll have a good car next week and have a chance to win that thing again, hopefully.”

Holleman bounced back to finish third in the second race. He said he plans on moving up to Modified full-time.

“That would be the goal (to leave Sportsman), but we’ve got some free spaces on this car (sponsorships) if somebody wants to put their name on it and help us out financially. If we could get some more financial help we could run a full season next year, and I think we showed tonight we can compete.”

As for Jonathan Brown, he not only was suspended last week, he barely made it to the track Saturday night in time to race. He was still having issues with his motor two weeks after the incident with Jason Myers. He didn’t qualify Saturday night and started last in the first 50-lap race after not getting to the track until cars were lining up for the first Stadium Stock race to start the night.

He finished third in the first race.

“Just to get the thing back together and show up over here to race is one thing, but to show up and pass 20 whatever cars the first race and and come back to win the second race, man, it’s phenomenal,” Jonathan Brown said.

Jonathan Brown took the lead on lap 13 and was able to pull away from Danny Bohn in the final 12 laps for the win.

“I was talking to Tony on the radio while me and Danny was still running side-by-side and I was, ‘If this don’t have the crowd on the feet nothing’s going to.”

Jonathan Brown is in fourth place, 56 points behind Burt Myers. But he realizes his suspension eliminated him from any realistic chance of a title.

“It really hurts because we come over and race as hard we can every lap,” Jonathan Brown said. “And I felt like we were disrespected. And to be suspended, it’s not just the money, but sitting out a race cost us a lot.

“We let my fans down, let my crew down. I felt like I’d let everybody down. It ultimately cost us a points championship.”