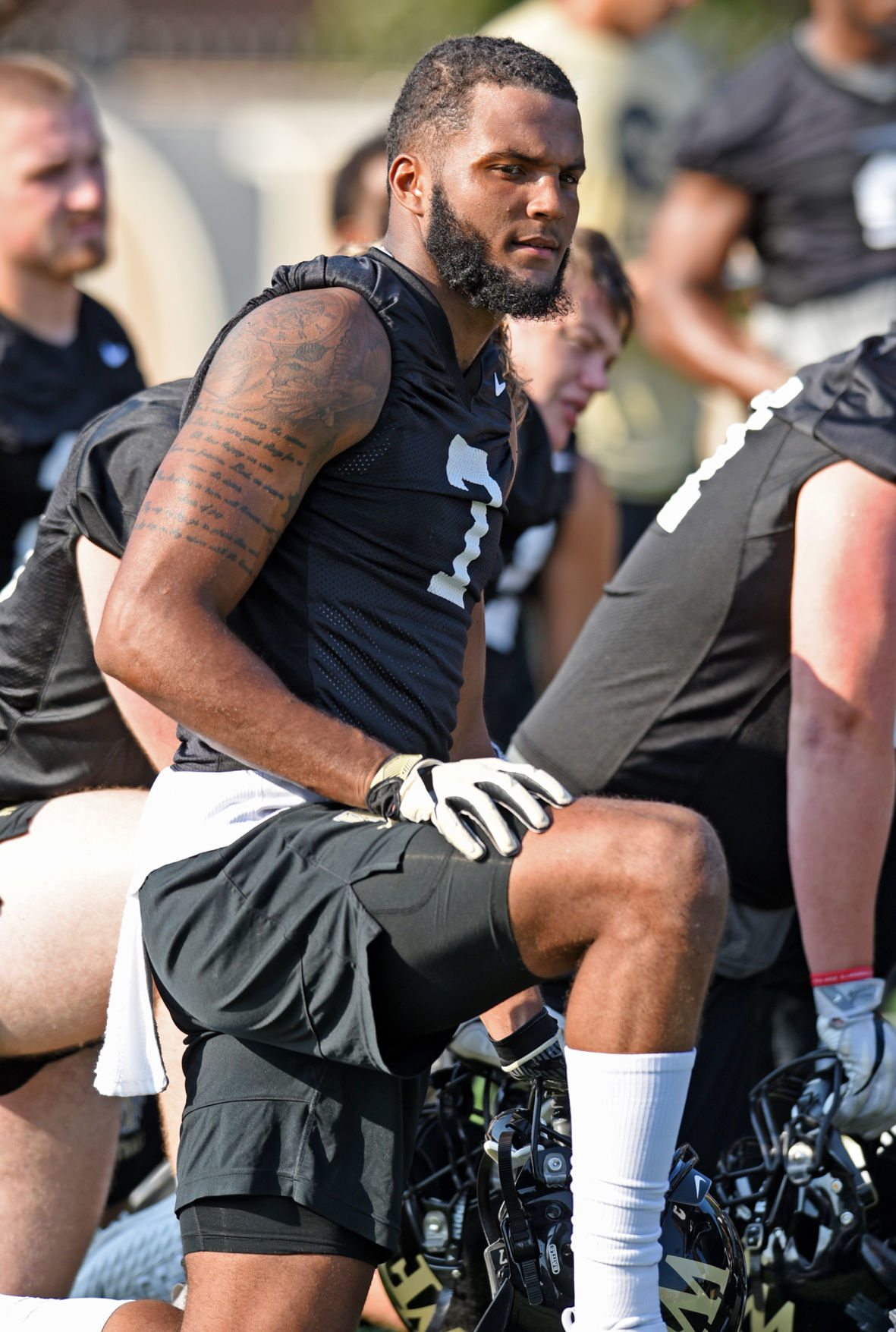 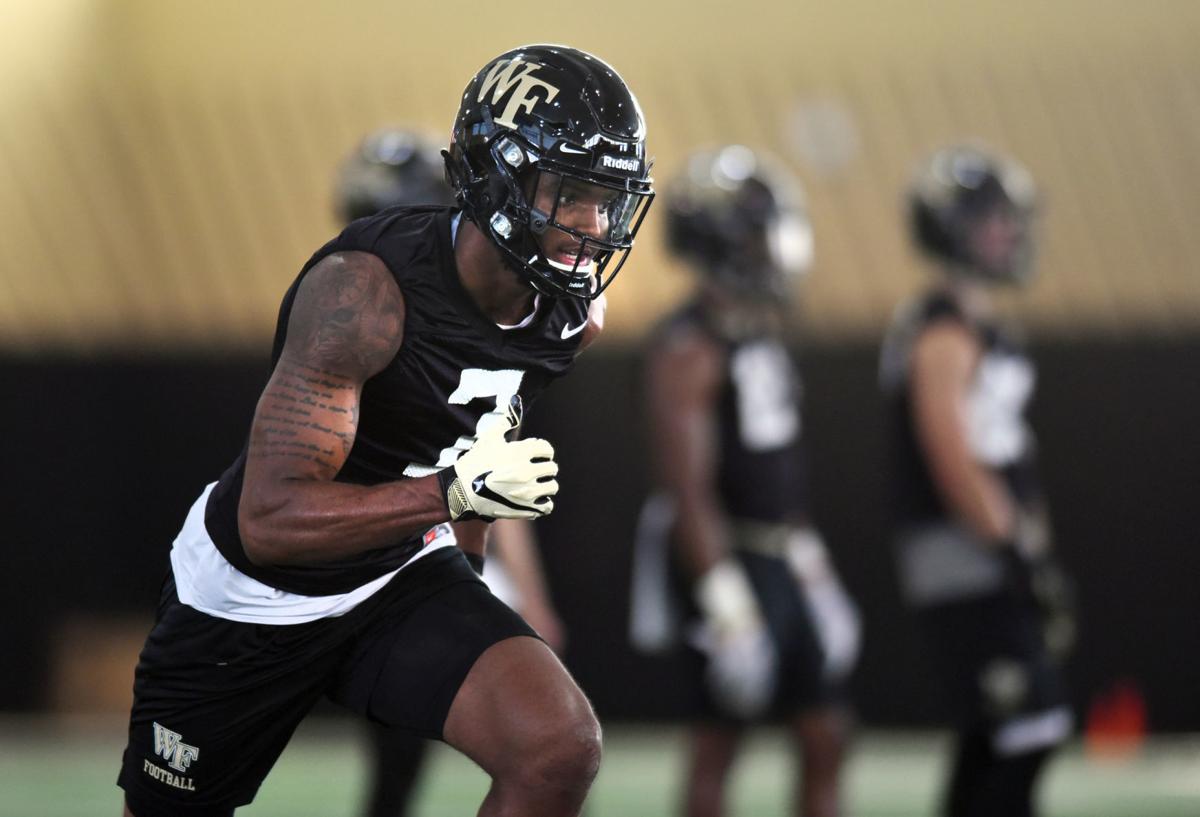 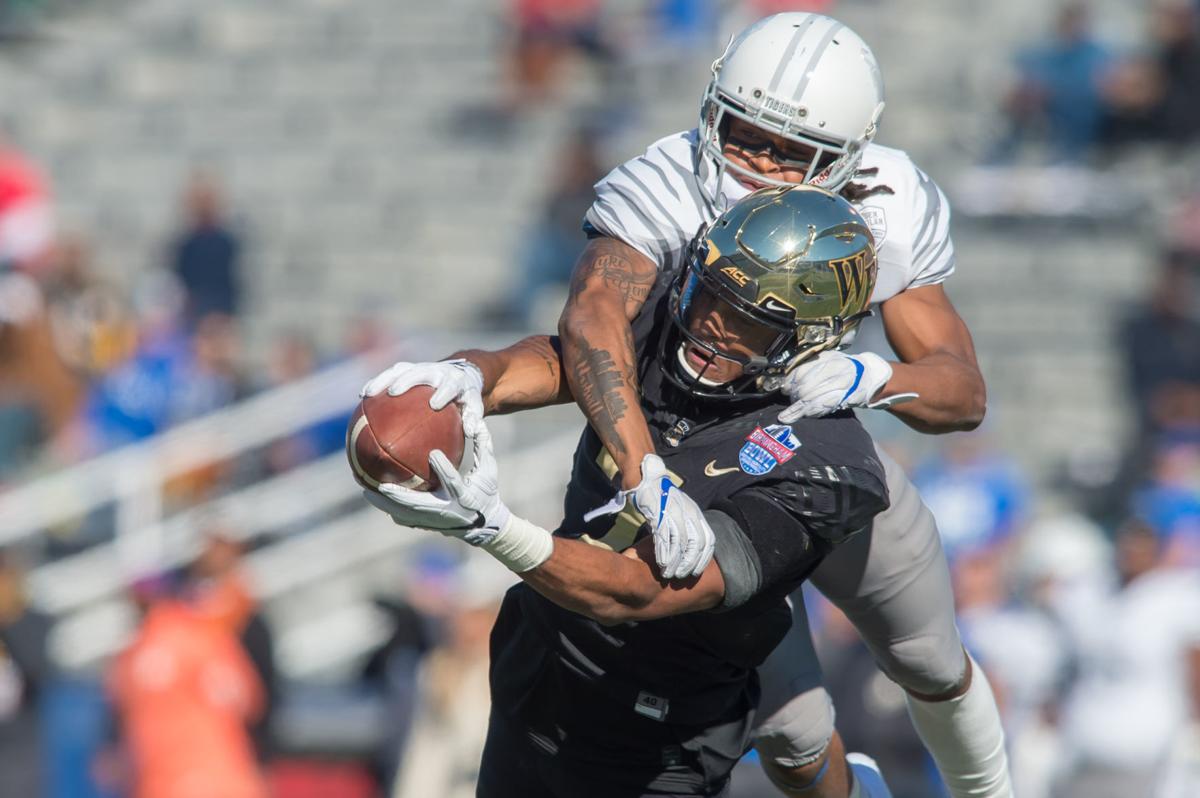 Wake Forest’s redshirt senior wide receiver stands 6-foot-5 and starts with that on a sticky Sunday afternoon, the Deacons having just completed their fourth practice of fall camp, and the second with shoulder pads.

And then Washington points out something that should be obvious, yet isn’t: He had not put on pads since the Birmingham Bowl.

“I’m making great strides since then,” said Washington, who underwent shoulder surgery after the season and missed spring practices. “Feel like (I’m) just catching up on the small mental things, details of the offense.

“But no, I’m feeling great physically.”

Tracing a singular point where Wake Forest’s injury woes of 2018 started can vary — you can start with torn ACLs for Chase Monroe and Spencer Clapp as far back as December of 2017, or with Justin Herron and Coby Davis tearing their ACLs in the season opener at Tulane.

In between there is Washington’s injury about one week into fall camp last year. He dove for a pass and landed on his left shoulder, an injury that kept him on the sideline for the first two games and had a lingering effect for the entire season.

“I guess, I don’t know, just having that mental block if you’re injured. It’s also one of those injuries that’s like having a pebble in your shoe, just something you’ve gotta play with, gotta face it,” Washington said of last season’s difficulties. “But I’ve just gotta overcome that, that’s just the game of football.”

Washington had two catches through the first six games last season. He said he was finally feeling like himself again coming out of the Deacons’ off week, and he had a catch in each of the last seven games, but he never seemed to reach the same effectiveness level of his breakout season in 2017.

There’s an argument to be made that his most-significant play of the season wasn’t even catching a pass from a Wake Forest quarterback — it was Washington who picked off Ryan Finley to seal the victory at N.C. State.

The Washington, D.C., native never seemed to get up to top speed, which is why it’s been so encouraging to see him excel in the first few days of fall camp.

There’s more to Washington’s fall camp than how he’s looked, too.

Washington is one of three fifth-year seniors in the Deacons’ receivers corps, along with Steve Claude and Kendall Hinton. The Deacons lost a prolific weapon with Greg Dortch’s departure, but they also lost their vocal leader of that group with Alex Bachman’s graduation.

Now it’s up to players like Washington to fill that void.

“This year he really has been a different kid, he’s come into his own right in front of our eyes. He’s matured tremendously,” said associate head coach Kevin Higgins, also the receivers coach. “This is really the first time since he’s been here where he’s taken a true leadership role without me having to say something.

“He’s pulling guys aside, he’s encouraging them, he’s challenging them. He’s making sure that they understand what is expected of guys.”

As Wake Forest works deeper into fall camp, keeping players healthy will continue to be priority No. 1. But don’t expect Washington to avoid diving for catches.

“Naw, naw, naw, not worried about that at all,” he said with a laugh.

Higgins, on the other hand …

“Held my breath on three different occasions when he went down on the ground here in preseason camp. He got up every time and each time he’s telling me, ‘Coach, I’m good, I’m good,’” Higgins said.

In each of the first three days of fall camp, Washington caught deep passes from Sam Hartman. The first- and third-day catches were down the sideline, the second-day catch was a deep post. Every time, Washington glided under the ball.

Sunday didn’t see the connection hook up for a fourth straight day.

“Yeah, naw, we’ll pick that back up (Monday), definitely,” a smiling Washington said. “We’ve gotta get back on that, continue that trend.”

Washington feels great, and has the potential to be great for the Deacons in his final collegiate season.