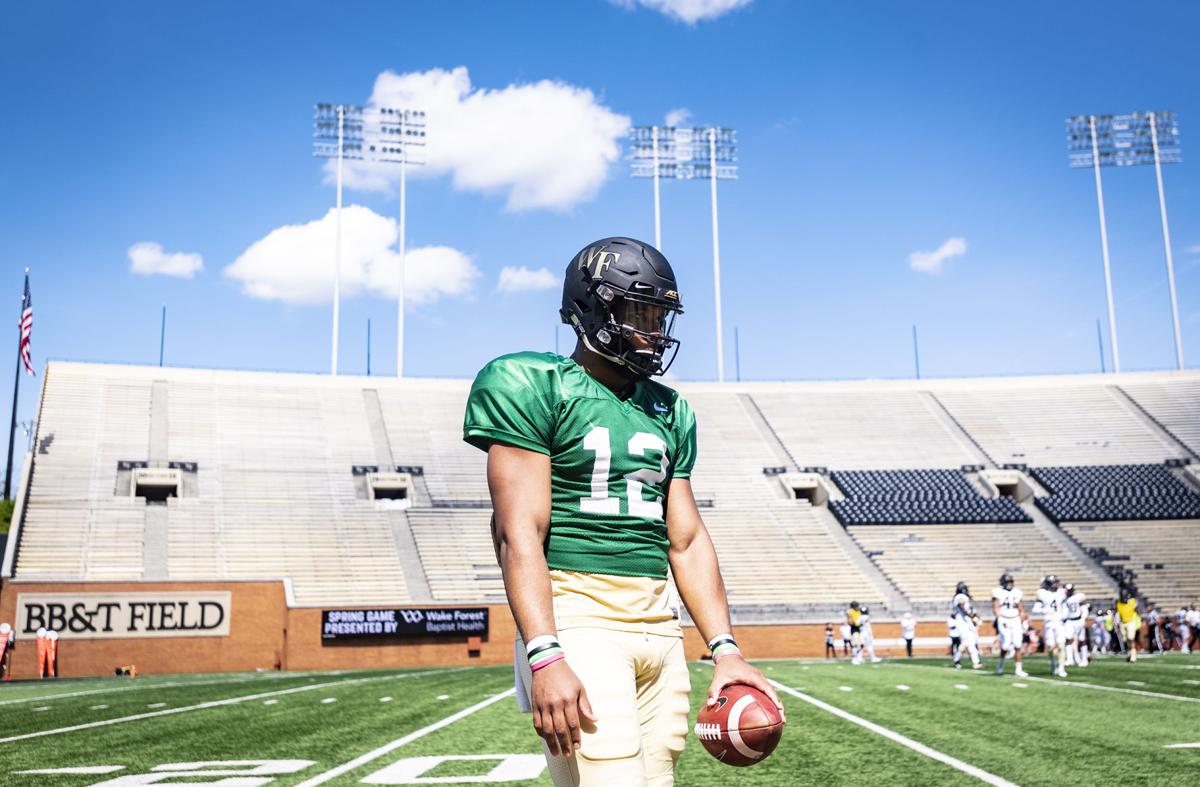 Wake Forest junior quarterback Jamie Newman walks off the field after warming up before the spring game. 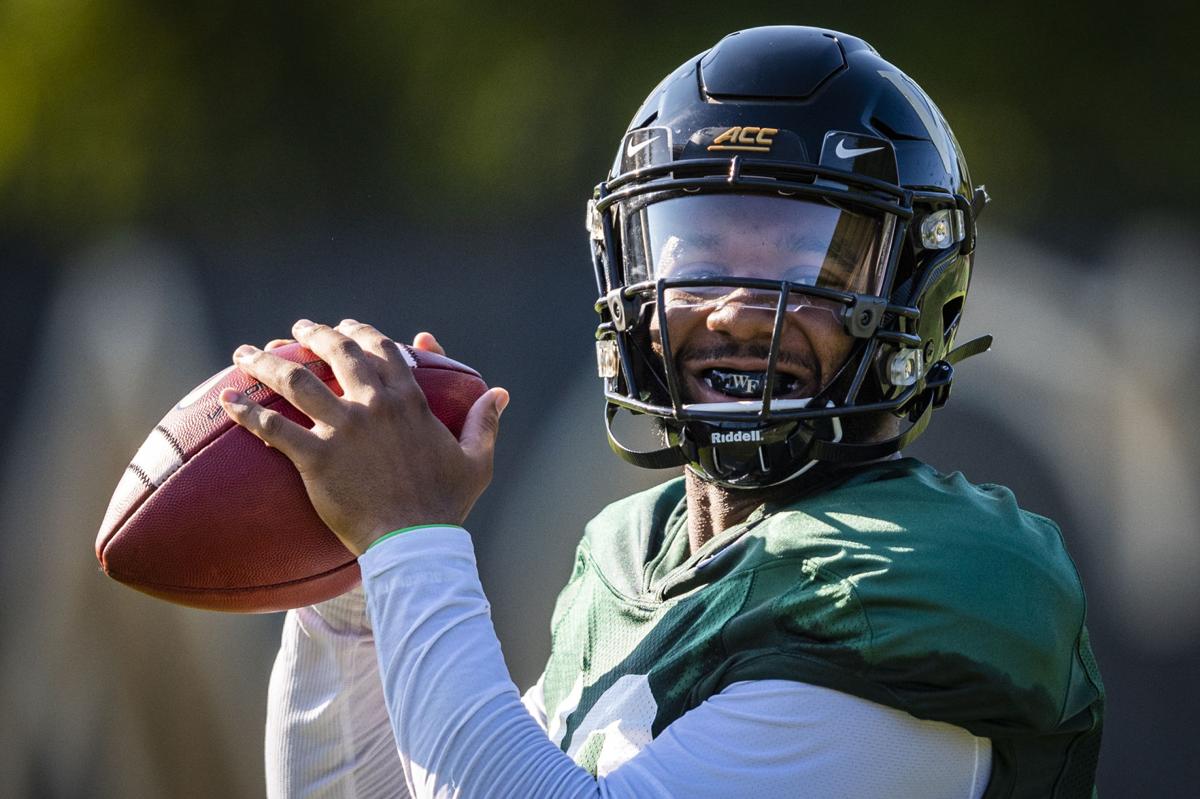 Wake Forest junior quarterback Jamie Newman will the starter for the Aug. 30 opener against Utah State. 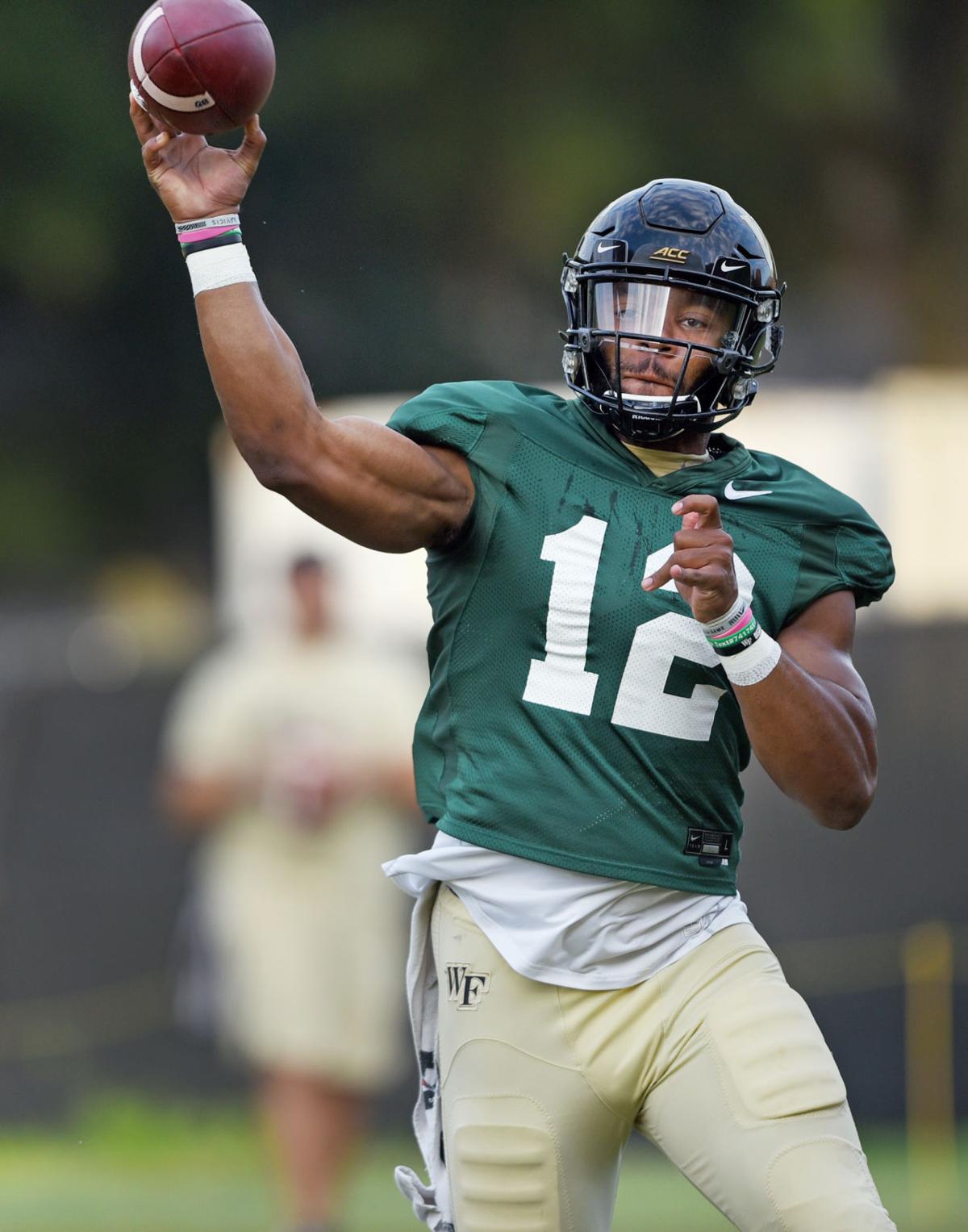 Wake Forest junior quarterback Jamie Newman walks off the field after warming up before the spring game.

Wake Forest junior quarterback Jamie Newman will the starter for the Aug. 30 opener against Utah State.

There’s no reason to keep the jar on the shelf if you know the contents.

Jamie Newman will be the starter for the Aug. 30 game against Utah State, Coach Dave Clawson announced Sunday afternoon.

“We made a decision today that Jamie Newman is going to be the starting quarterback,” Clawson said. “We met with Jamie and Sam (Hartman), so that’s the direction we’re going with it moving forward.

“They both played well. There’s an old adage, if you have two, you really have none. In the case at Wake Forest in 2019, we really have two good quarterbacks.”

Newman, the redshirt junior from Graham, has been competing with Hartman since the start of spring practices. The quarterbacks were told of the decision before Sunday’s practice. So, with 15 team activities in the spring (14 practices and the spring game) and 15 (14 practices and a scrimmage) team activities in fall camp, the 31st on-field team activity was the first of the calendar year that Wake Forest has had a starting quarterback.

“Just an honor, I thank Coach for giving me the opportunity and obviously it feels great, because I worked for this for a long time,” Newman said. “I just want to help the Deacs win every game.”

Wake Forest’s second and final scrimmage of fall camp is slated for Monday evening. Last year, with the same players competing for the same spot, it wasn’t until after that second scrimmage — and after Newman strained a groin in that scrimmage — that Hartman was named the starting quarterback.

Clawson has said on multiple occasions that the quarterback decision — among other decisions — was placed in a jar and that the jar was placed on a shelf, and you didn't open it until you had to.

The timing this year was different because, Clawson explained, there wasn’t a need to delay the decision.

“We knew what we were going to do with it, there was no point in waiting,” Clawson said. “(Monday) night, instead of making the reps 50-50 — if Jamie is the starter, we want him working with the starting O-line and the receivers and get all that timing down. We’re still going to give Sam one-reps, but Jamie will probably get two-thirds of them.

“No matter what happened in the scrimmage, we didn’t think that that was going to change the decision. … It’s hard for those guys to go through that every day. That lets them settle into their roles and lets the team know.”

Newman has been noticeably more vocal this fall camp than a year ago. Clawson credited that to the confidence Newman has from the way last season ended, that Newman has gone from wondering if he could “do it” to knowing he could “perform at a high level.”

Newman said he entered fall camp knowing he had to be more of a vocal leader.

“Talking to my peers, not knowing this, but a lot of my peers looked up to me in the spring as a leader, so you know, I took that as an honor,” Newman said. “But I also took that as a workshop to get better, get better as a leader, be more vocal, help guys out, pick guys up.”

Newman’s story last year was one of meteoric rise that coincided with the Deacons winning three of their last four games. Before Wake Forest won at N.C. State, Newman had taken 66 snaps in his career. He took 73 that night — the final one resulting in a game-winning 32-yard touchdown pass to Jack Freudenthal with 30 seconds left.

After a subpar performance against Pittsburgh, Newman threw four touchdowns in the rout at Duke. And then in the Birmingham Bowl, he was named MVP after throwing for 328 yards and a touchdown and running for 91 yards and three touchdowns — including the game-winning score with 34 seconds left.

The final stats for Newman in six games (four starts) last season were: 84-for-141 for 1,083 yards, nine touchdowns and four interceptions, with 247 rushing yards and four touchdowns on 64 carries.

“I feel like I’m a lot more comfortable, definitely a lot more comfortable in our offense. And just seeing a lot of different defenses is becoming more natural and reacting to them,” Newman said of the difference from last fall camp to this one. “Just doing all of that is slowing the game down and is making the game fun, just being able to react.”

Newman and Hartman both threw for 146 yards and accounted for two touchdowns in the first scrimmage of fall camp. Newman was more accurate, completing 8 of 12 passes (Hartman was 9-for-18), while Hartman had more success running the ball, rushing for 38 yards to Newman’s 6.

“I don’t think either of those competed in a way that they thought every rep was life or death. They really, I thought, went out here and competed hard and recovered from mistakes,” Clawson said. “Both of them had more good days than bad days.

“But we just felt, at this point, this is the best decision for our football team.”

The remaining question becomes whether Wake Forest will enter the season with both quarterbacks on its roster. The immediate indication from Hartman, Clawson said, is that Hartman would “keep competing and if we needed him, he’d be ready.”

“Sam took it maturely and professionally, disappointed — he’s a competitor,” Clawson said. “… I thought Sam handled it extremely maturely and again, it wasn’t a result of him not playing well, it just — we felt at this point, the overall body of work, Jamie gives us the best opportunity to win.

“But we certainly believe we can win with Sam as well.”

The Deacons have had at least two quarterbacks start a game in each of the last four seasons — John Wolford’s freshman season in 2014 was the last time Wake Forest started the same quarterback for every game.

Hartman, in nine starts last season, completed 161 of 291 passes for 1,984 yards and 16 touchdowns, with nine interceptions, and ran for 275 yards and two touchdowns on 107 carries.

If Hartman transfers — in this climate of college football, quarterbacks who have started before and are no longer starters never seem to stay put for long — it would seem to elevate freshman Michael Kern to the backup spot. The 175-pounder from Orlando completed 5 of 6 passes for 53 yards in the scrimmage last week. Tayvon Bowers, a redshirt sophomore who took eight snaps last season against Towson, and Leo Kelly, a walk-on freshman, are the other quarterbacks on the roster.