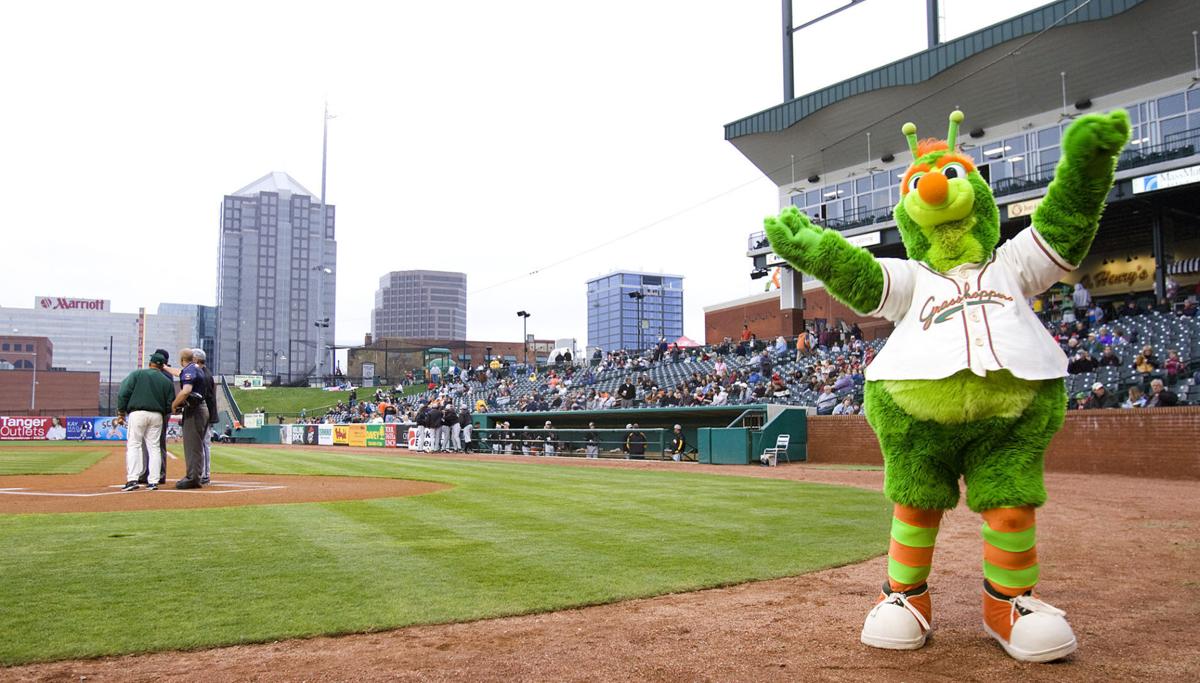 Guilford the Grasshopper waves to fans before a Greensboro Grasshoppers game. 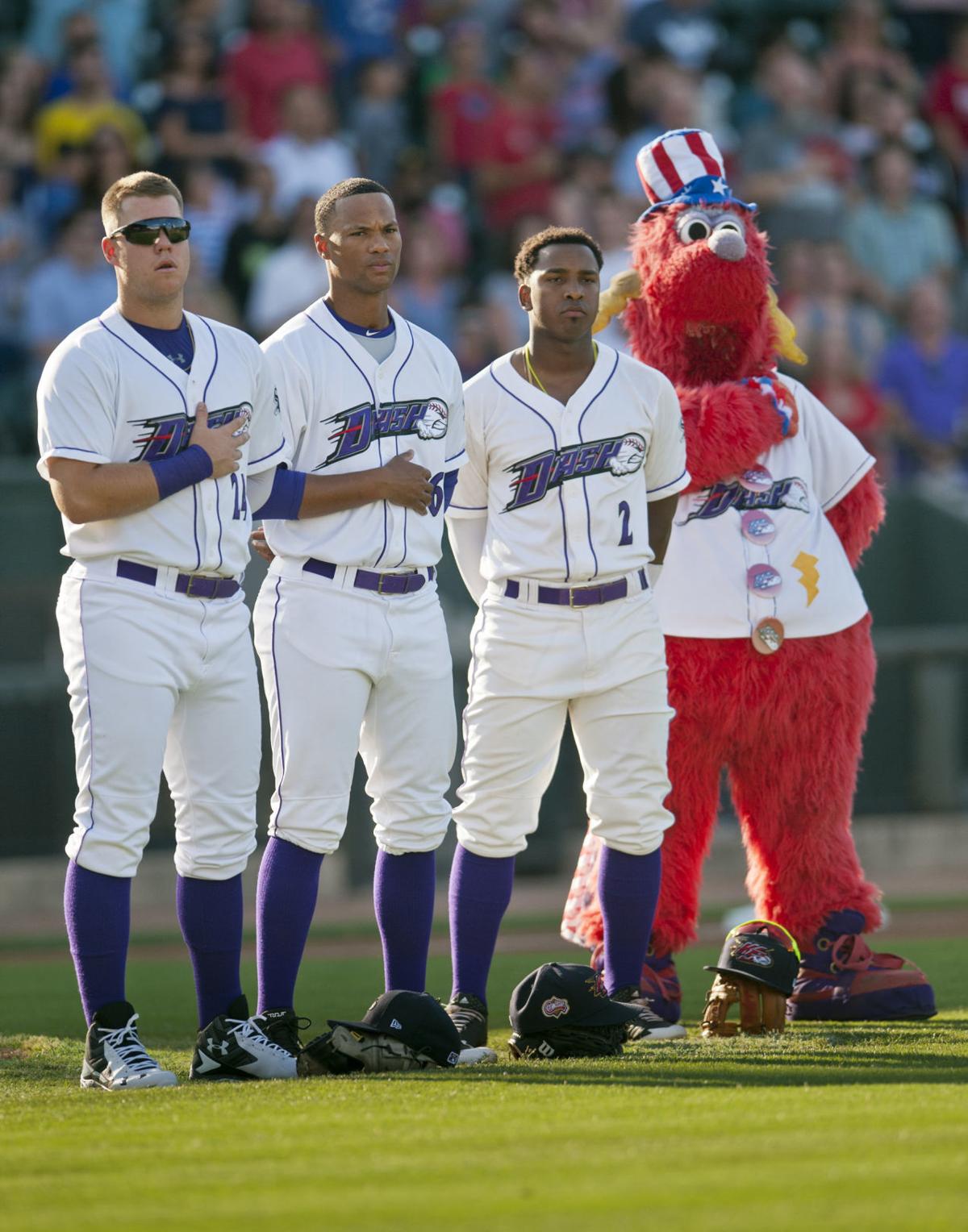 Guilford the Grasshopper waves to fans before a Greensboro Grasshoppers game.

GREENSBORO — Somewhere men are laughing, and somewhere children shout. But there is no joy in Mudville …

Or Greensboro. Or Winston-Salem. Or Burlington.

Or Asheville, Kannapolis, Hickory and on and on.

… Mighty baseball has struck out.

Minor League Baseball made a long-expected bleak decision official this afternoon, canceling the 2020 season for its 160 teams in 17 leagues from coast to coast.

That means no Greensboro Grasshoppers baseball, snapping a streak of 40 consecutive years of pro baseball in the city. The Hoppers, a Class A affiliate of the Pittsburgh Pirates in the South Atlantic League, normally play a 140-game schedule with 70 games at First National Bank Field.

It means no Winston-Salem Dash baseball at newly renamed Truist Stadium. The Dash, an advanced Class A affiliate of the Chicago White Sox in the Carolina League, also plays 70 of its 140-game season at home.

“It’s a tough, tough day in what’s been a challenging year,” Dash president C.J. Johnson said. “It’s disappointing. We’re our community’s gathering place for fun in the summer, and to know we’re going to go five months of not having fans come out for Dash baseball is hard to swallow.”

It’s the same story in Greensboro.

“It’s something we sort of felt was going to happen for, gosh, close to two months now,” said Donald Moore, president and general manager of the Hoppers. “Well, it’s here and it’s over. Now we can start looking ahead and stop looking behind.

“It’s devastating, just devastating. Assuming we get back in 2021, we will have gone a little more than a year-and-a-half between games. And games are how we make money. It’s a challenge, but we’re going to be all right. Tough times don’t last, but tough people do.”

In the end, the minors couldn’t play because Major League Baseball would not assign players to its affiliates during the ongoing coronavirus pandemic.

“It wasn't withholding for the sake of withholding,” Pat O’Conner, MiLB’s president and CEO, said in an online news conference. “It was a matter of practical circumstances. ... It was the right thing to do. And in a practical sense, it was the only thing to do.”

When the pandemic hit, Major League Baseball and Minor League Baseball were in the midst of strained negotiations toward a new operating agreement. The current Professional Baseball Agreement between the two expires Sept. 30.

This week, MLB announced it would play a shortened 60-game season with curtailed travel. Players will begin training camps Wednesday, and games will start July 23.

But MiLB didn’t have that option, O’Conner said, and didn’t press the issue while MLB made its plans.

“I don’t think it was a lack of cooperation” that canceled the MiLB season, O’Conner said. “... The problem is, neither one of us can forecast or project the environment players and fans will engage in. Our business model is based on fans in the stands. With the health protocols ... it was an insurmountable list of challenges.

“There’s no question that what the pandemic has done has made us weaker economically.”

The economic reality has hit home for both the Hoppers and Dash.

“I’m hopeful when we start gearing up for 2021,” Moore said, “that things will be better and we can bring people back and get back close to where we were.”

The same is true in Winston-Salem.

“We’ve had to make some very difficult personnel decisions to weather this pandemic,” Johnson said. “We’ve had hiring freezes, some temporary terminations, furloughs and pay cuts. It’s been across the board and impacted all our staff financially. And with our hundreds of (part-time) game-day staff, they never even got a chance to start. They’ve had no paychecks at all.”

In its PBA negotiations, MLB has pushed for contraction and reorganization of the minor leagues.

Economic losses from the pandemic could force that. O’Conner estimated that 85 to 90 percent of most minor-league revenue is “game-related” from tickets, concessions and advertising that is dependent upon being visible at games.

“Major League Baseball has indicated they want 120 teams in the new agreement,” Moore said. “And I don’t know if there will be 120 left. Time will tell, but it sure is a challenge.

“I’ve got to believe there are a significant number of folks who are facing a real challenge to make it through to next year. You go a year-and-a-half without significant revenue, I don’t care what kind of business you’re in, that’s awfully difficult.”

Greensboro and Winston-Salem aren’t in danger of losing their franchises, according to Moore and Johnson. Both leaders said their teams will make it through the crisis despite substantial monetary losses.

“We’re very fortunate to have a partner like First National Bank,” Moore said. “… . They’re some great folks, and they want to see us succeed.”

“We’re a small, seasonal business,” Johnson said. “The vast majority of our revenue is generated in five months of the year when we’re hosting Dash baseball games. You take those five months away, and you’re looking at 19 months of not having your primary revenue source. …

“I’m not at liberty to discuss organizational finances, but it’s obviously a tough year. We’re going to need community support, and the good news is we’ve really felt that from our fans, our sponsors and our partners. We’ll survive.”

Updates at 4:33 p.m. with news that season is canceled:

GREENSBORO — No Minor League Baseball will be played this season because of the coronavirus pandemic, with an official announcement having come late this afternoon.

The season is being shelved, according to MiLB, because Major League Baseball is not providing players.

Last week, Major League Baseball reached an agreement to play a short, 60-game season in 2020. Players are supposed to report for training camps July 1, with games set to begin July 23.

Major League teams will have 60 players eligible under the special 2020 rules, their entire 40-man rosters plus a 20-player "taxi squad."