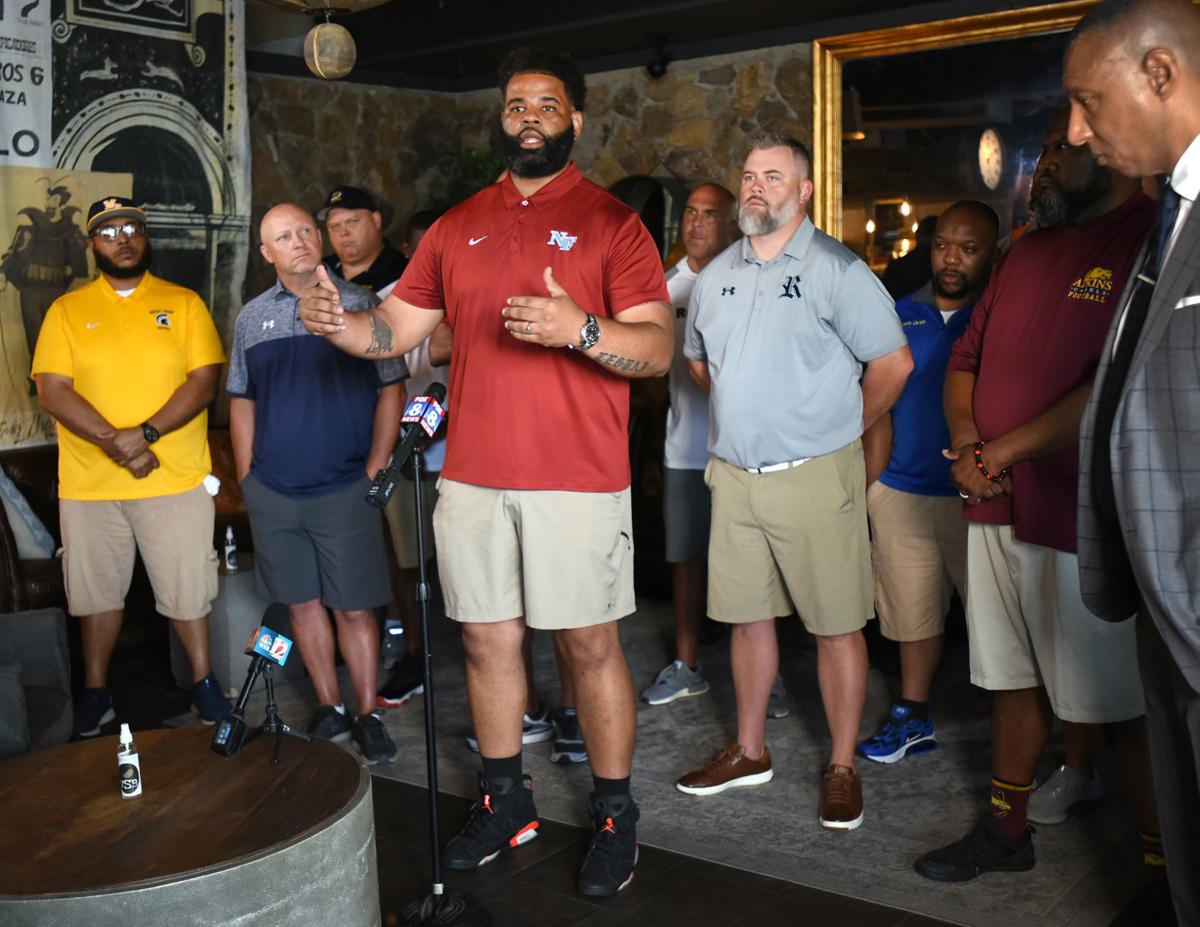 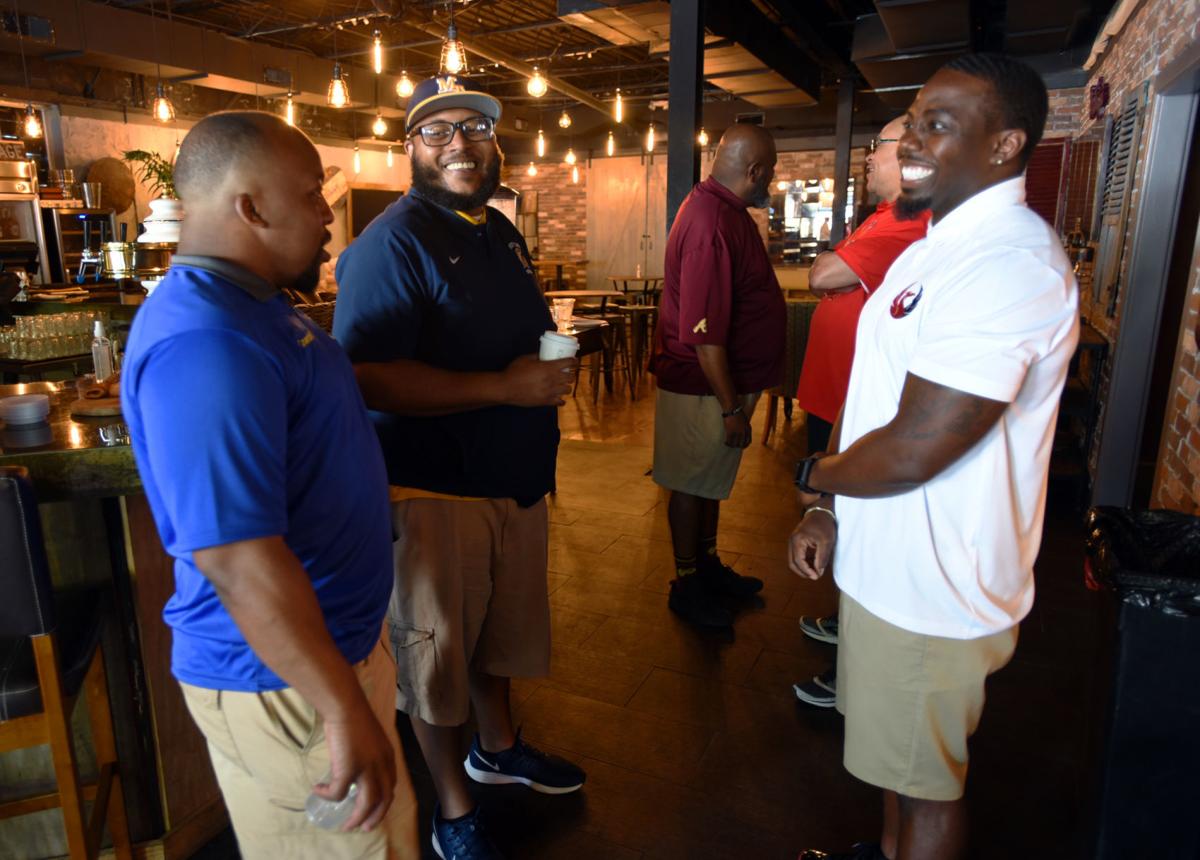 Rodney McKoy stood tall with his left hand placed over the right.

Two microphones rested in front of the second-year head coach of the Walkertown football team — both affixed to metal stands. Behind McKoy stood 10 high school coaches hailing from programs across Forsyth County, spaced a few shoulders apart, on a faded Oriental rug at Vintage Sofa Bar off Burke Street in Winston-Salem.

McKoy, donning a bright red Nike polo shirt with his team's signature Wolfpack logo attached to the chest Thursday morning, initially had hints of apprehension leading up this gathering. It began with a fielded phone call from Coach Josh McGee of Reagan late last week — an invitation to discuss, amongst those coaches standing in the room, racial issues following the death of George Floyd in Minneapolis that sparked protests across the country calling for justice and equality. The group, likely adversaries on the field, aired anything from personal stories to tackling those topics in their locker rooms.

An initial gathering of coaches occurred Monday, which also included Forsyth County Sheriff Bobby Kimbrough Jr. and Jamison Keltner, a sergeant in the Winston-Salem Police Department whose son, Christian, was a defensive lineman under McGee who graduated in 2019. McKoy's hesitation for the meeting, he said, quickly faded that day.

"I was, initially, hesitant. Truthfully, I didn't sleep for three days," said McKoy, following a brief news conference. "Because I was like, 'Oh, man. How's this going to be? I didn't want everyone to get in a room, you know, kind of hashing out some stuff and get to arguing and fussing.

"In actuality, it was quite the opposite. We got in here, man, and everybody listened. I got comfortable and we said, 'You know what? This is the right thing to do.'"

The meeting was pieced together, after McGee noticed a Twitter post on June 2 from Antwon Stevenson, the head coach at Glenn. Coaches and local law enforcement in Cabarrus County stood side-by-side during what was a similar meeting to discuss racial issues and ways to implement change.

McGee said the meeting provided him with a better understanding of how to handle racial issues. Those talking points included police brutality, proper ways for players to interact with law enforcement and fostering relationships between kids of different races.

The West Forsyth graduate, who was a standout quarterback at area HBCU Winston-Salem State spanning 2001 to 2004, noted his diverse staff and team for a predominantly-white high school in Pfafftown with an enrollment of more than 2,000 students. McGee has called former and current players — and it's an ongoing effort — over the past several weeks. He's even checked in with standouts like Ja'Shawn Joyner, his first quarterback at Reagan who went on to play at Wingate, and former captain Isaiah Anthony.

"I don't ever want people to feel like I'm comparing my experience to what's going on in the world today. There is no comparison," McGee said of his experience at WSSU. "... When I first started, there were feelings that I was a fish out of water. That was not the environment that I was accustomed to, you know, even back in the late '90s and early 2000s at West Forsyth — it was a diverse place.

"But it took me about three days over there to realize that (my teammates) loved me, and they respected me and they appreciated me. It just gave me a passion for people, but also a passion to make sure that everybody felt the same way I feel or felt in that situation."

According to Tony Stevens, the owner of Vintage Sofa Bar, he was contacted by Lou Kovacevic, a friend and regional sales representative for Riddell, in need of a space for the coaches to meet — a place to hold a conversation undisturbed. He stood near the bar of his business, a few feet away from a cardboard takeout container of Starbucks coffee, recalling Monday's conversation that he said nearly moved him to tears.

"I grew up with a single mom," said Stevens, a 1987 graduate of High Point Andrews, where McKoy won an NCHSAA Class 2-AA title seven years ago. "Football coaches saved me. So, whenever (Lou) told me what it was about, I was all in."

David Hamlin of Atkins — one of four, along with East Forsyth's Todd Willert, McKoy and McGee, who were the group's spokesmen — felt the gathering of coaches was a proactive move to provide education on racial issues. He said, when the Camels' season begins, 30 minutes of practices will be blocked off for what he called "sensitivity training."

That includes 15 minutes for players to ask questions. Hamlin said he's already kicked that off with his 10-member staff, which includes random calls to coaches.

"It was said here, there's been some coaches that were getting ready to leave campus (after football games) and the coach had a hood on and got pulled. But not doing anything wrong," Hamlin said. "Or just being questioned on your campus late. After a game, our mindset is to get home safely to our families just like a police officer — that's the same thing they want to do at the end of their shift.

"You know, we just want to bring awareness that, 'No, we're not having some of the things that the media is showing on TV that's happening in other places.' But still, it's not a total utopia."

Willert recognized these issues wouldn't have an overnight solution. He described it as a grind, similar to a football season. More than 10 days of peaceful protests, in the wake of Floyd's death, across Winston-Salem, even included Christian Beal-Smith, Willert's former standout running back now at Wake Forest.

Willert, of course, is in full support. He stood next to Kimbrough on Thursday after making a brief statement.

A cohort of coaches united.

"To me, I get chill bumps when I saw them talking (Monday) and saw what was happening. And they said, 'We want to be a difference.' And, 'What can we do?'" Kimbrough said. "This, right here, has never been done before. They weren't trying to make history. They were just trying to make a difference — and they're doing just that."

What an admirable initiative by our local high school coaches and our GREAT sheriff Bobby Kimbrough to sit down and have a heart to heart discussion on race relations with everything coming to light in today's situation. Sheriff Kimbrough never ceases to amaze me with the great job he and his department have done since being elected. Way to go! [smile]