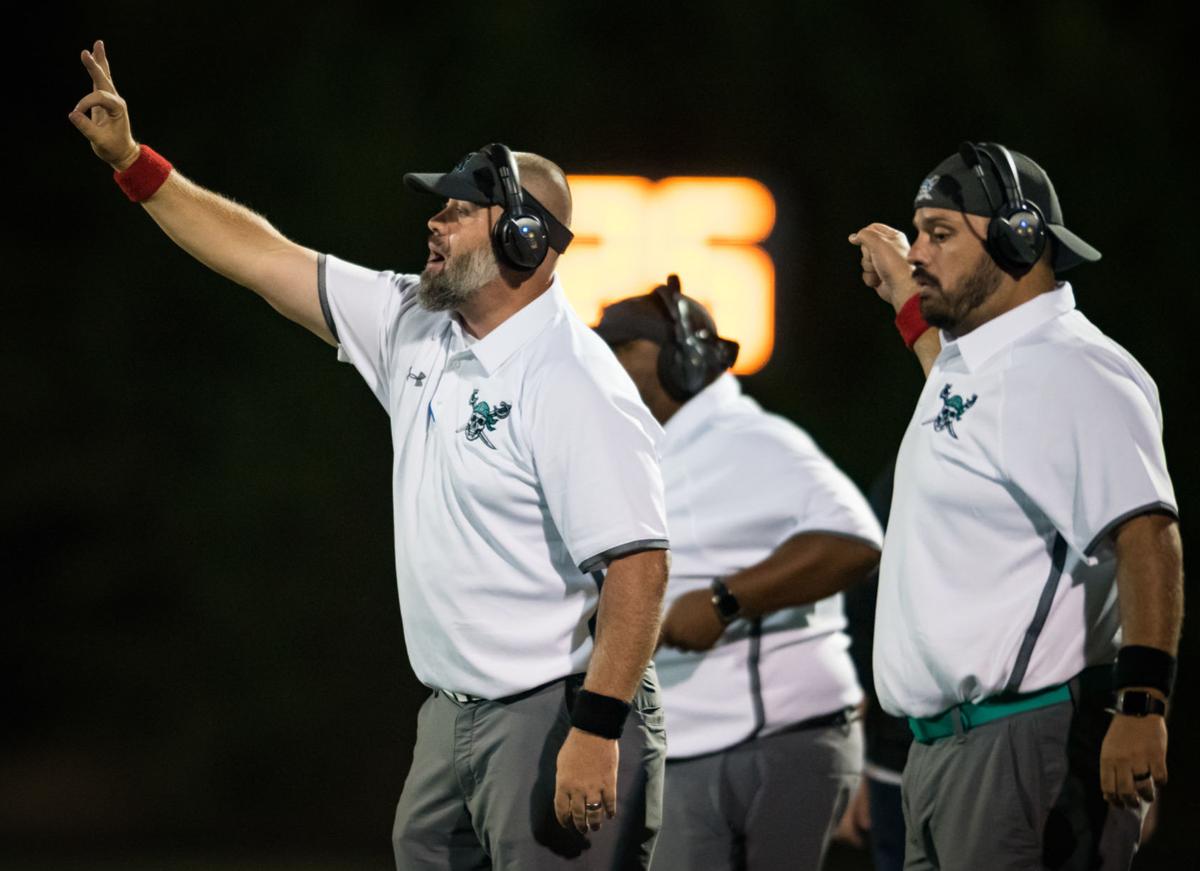 Coach Josh McGee of Reagan and four members of his staff previously played under Russell Stone at West Forsyth in the 1990s and early 2000s. 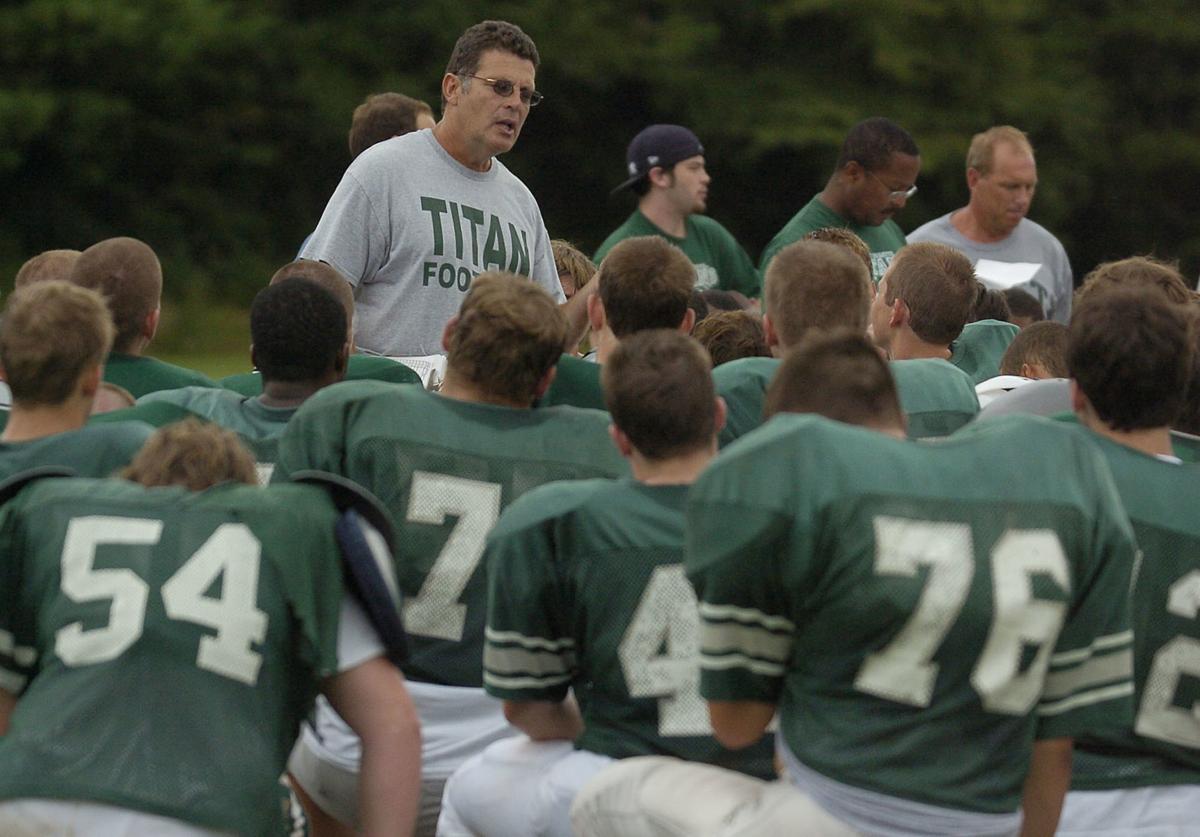 Coach Josh McGee of Reagan and four members of his staff previously played under Russell Stone at West Forsyth in the 1990s and early 2000s.

It was a routine Josh McGee remembers well, even after more than 20 years have passed.

Friday nights in Clemmons meant football, and that applied to the up-and-coming talent years away from its time at West Forsyth High School. McGee, who grew up in nearby Lewisville, was one of those kids — ages 10 through 13 were what he recalled best — in the early to mid-1990s who hadn't yet donned a JV or varsity uniform.

At that time, McGee played for the Lewisville Titans — a youth football league he joined back as a 4-year-old. Friday night practices at Southwest Elementary School, walking distance from West Forsyth, ended with a tradition.

Like clockwork, a mass exodus of pint-sized players made their way to the high school to watch a varsity football game. And that's where McGee would watch Russell Stone, who was the head coach at West Forsyth from 1991 to 2004, lead the Titans.

"I just remember being a kid and dreaming about playing at West Forsyth. But, most importantly, playing for Coach Stone," McGee said. "And then, when you get to high school, he's everything I thought he would be.

"I am who I am today because of Russell Stone."

McGee went on to play varsity under Stone in 1999 and 2000. At quarterback, he led the Titans to a Central Piedmont 4-A title his senior year.

McGee credits Stone for his later success at Winston-Salem State as a four-year starter. He was a seventh-string quarterback at the beginning of his freshman season in 2001. McGee was the starter for the final six games of that year, receiving MVP honors in the CIAA title game.

Now in his ninth season as the head coach at Reagan, McGee, 36, has tried to emulate Stone's style.

"The relationship part. Understanding that it's more than football," said McGee. "Our ultimate goal here is to build a relationship with these kids that goes far beyond the game of football.

"You know, if I could mean half as much to my players as Coach Stone meant to me and means to me, I will have done a pretty good job."

Tonight will likely conjure up many of those old memories for McGee. Reagan faces Hickory — where Stone has been the head coach since 2017 — in a nonconference road game.

It'll be McGee's 100th game since being hired at Reagan in Jan. 2011, and his first time facing his former coach. It's just as special to four of his assistants — Anthony Jenkins, Kevin Shelf, Richard Burton and Matt Vogel — who played under Stone at West Forsyth in the 1990s and early 2000s.

"When you're a football coach and you have such a big part of young men's lives, you always hope that things turn out and they're successful," Stone said. "It's a dream for me to see that so many of those guys are family men and doing well in life."

Stone recalled details about his five former players — such as McGee's performance in the conference championship his senior year. According to Stone, McGee completed 7-of-9 passes for 162 yards and three touchdowns in a 29-22 win over Reynolds on Nov. 3, 2000.

But Jenkins was the first of those five to play for Stone in the early 1990s. Jenkins, 45, the defensive line coach, was the starting point for a tradition Stone has continued for nearly 30 years.

In 1992, Jenkins was a defensive lineman — an all-conference selection for the second straight year that season with the Titans. Stone gave his then-senior, who went on to play at Butler Community College and Maryland, a No. 99 jersey. It was given to good defensive lineman who could help in "short-yardage situations," Stone said.

"One point short of 100 — that's what I would always say," said Jenkins, who was inducted into the Winston-Salem/Forsyth County High School Sports Hall of Fame this year. "If 100 ain't perfect, 99 is the best."

Burton, the Raiders' defensive coordinator, and Vogel, the offensive coordinator, both played with McGee under Stone as well. Vogel, who played on varsity four years before graduating in 2002, was McGee's center. While with the Lewisville Titans, Vogel, 35, remembers those walks to watch Stone and his West Forsyth teams.

There was a moment — in a 32-13 loss to Parkland in August 2001 — that stuck. Vogel said he had three or four bad snaps and Stone wasn't happy. But he knew how to get through to Vogel.

"One of my biggest memories of my senior year is him just yelling at me really bad at halftime at one of my games because I was playing really bad," Vogel said. "That kind of set the tone for the rest of my senior year — I got a lot better after that.

"It was one of those things, man. He'd let you know how much he loved you, but he was going to make sure you were getting the best of your ability."

For Burton, who graduated from West Forsyth in 2001 along with McGee, it was the talks outside of football that he remembers. Burton said the Titans held pregame meals at Sagebrush Steakhouse and Saloon when he was an outside linebacker.

"We would all just be sitting there talking, and he would come around to all the tables and have different funny conversations with us," said Burton, who was also on the Northern Guilford staff with Stone under Johnny Roscoe when that team won the NCHSAA Class 3-AA championship in 2014. "Whether that was to get our minds off the game, some of us might've been too uptight at the time — that kind of thing."

Shelf, 31, heard of Stone by word of mouth before eventually playing for him. He grew up in eastern Winston-Salem, and was a defensive back for the Titans. Stone wasn't with the program for his last season in 2015, however — that was his first of two years at the helm of Pembroke Purnell Swett.

And, according to McGee, he still keeps in touch with Stone. They have a few phone conversations over the course of the year. McGee used to call Stone for coaching advice, and now the shoe is on the other foot, Stone said.

He'll soon see how that lasting impression rubbed off on his former players.

"I've got a bad disease — I love coaching and I love my players," Stone said. "This is my 40th year and, if these people will let me continue coaching, then I'll keep rolling."