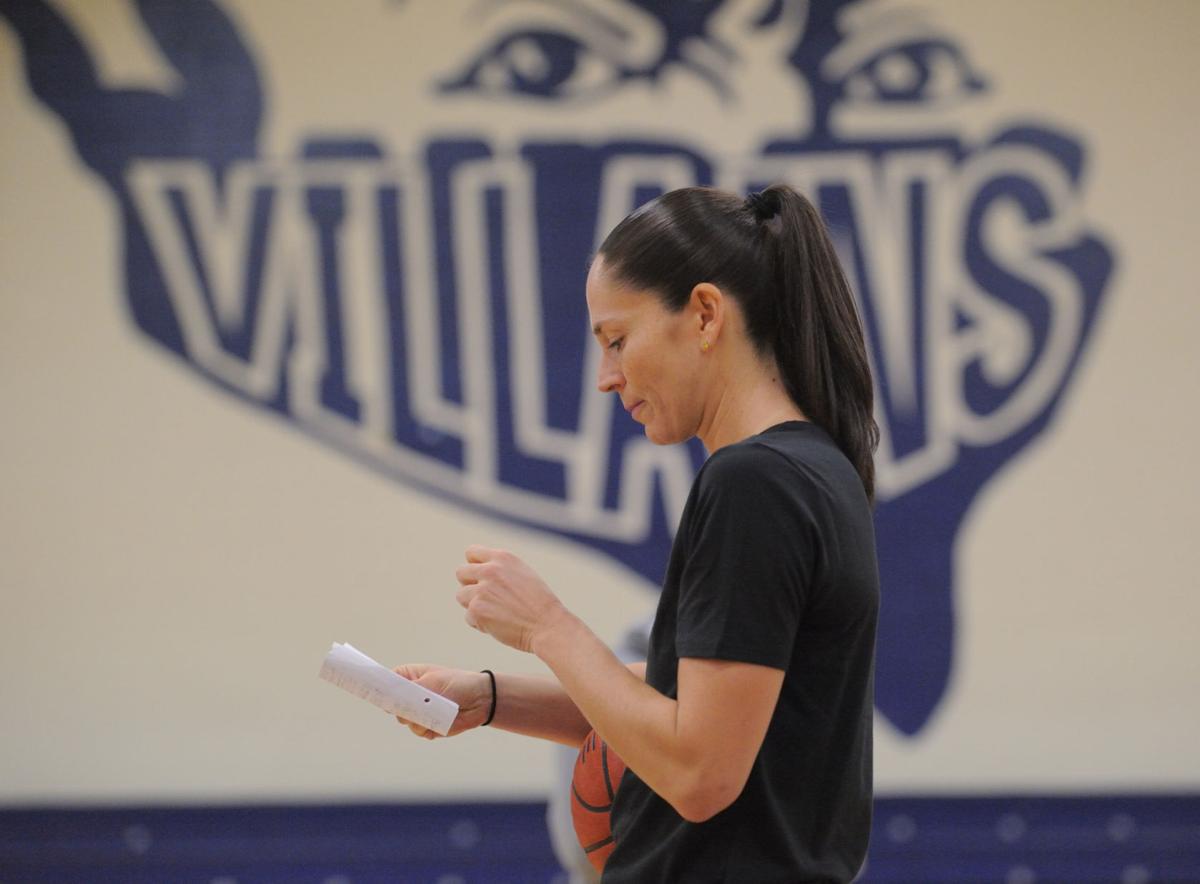 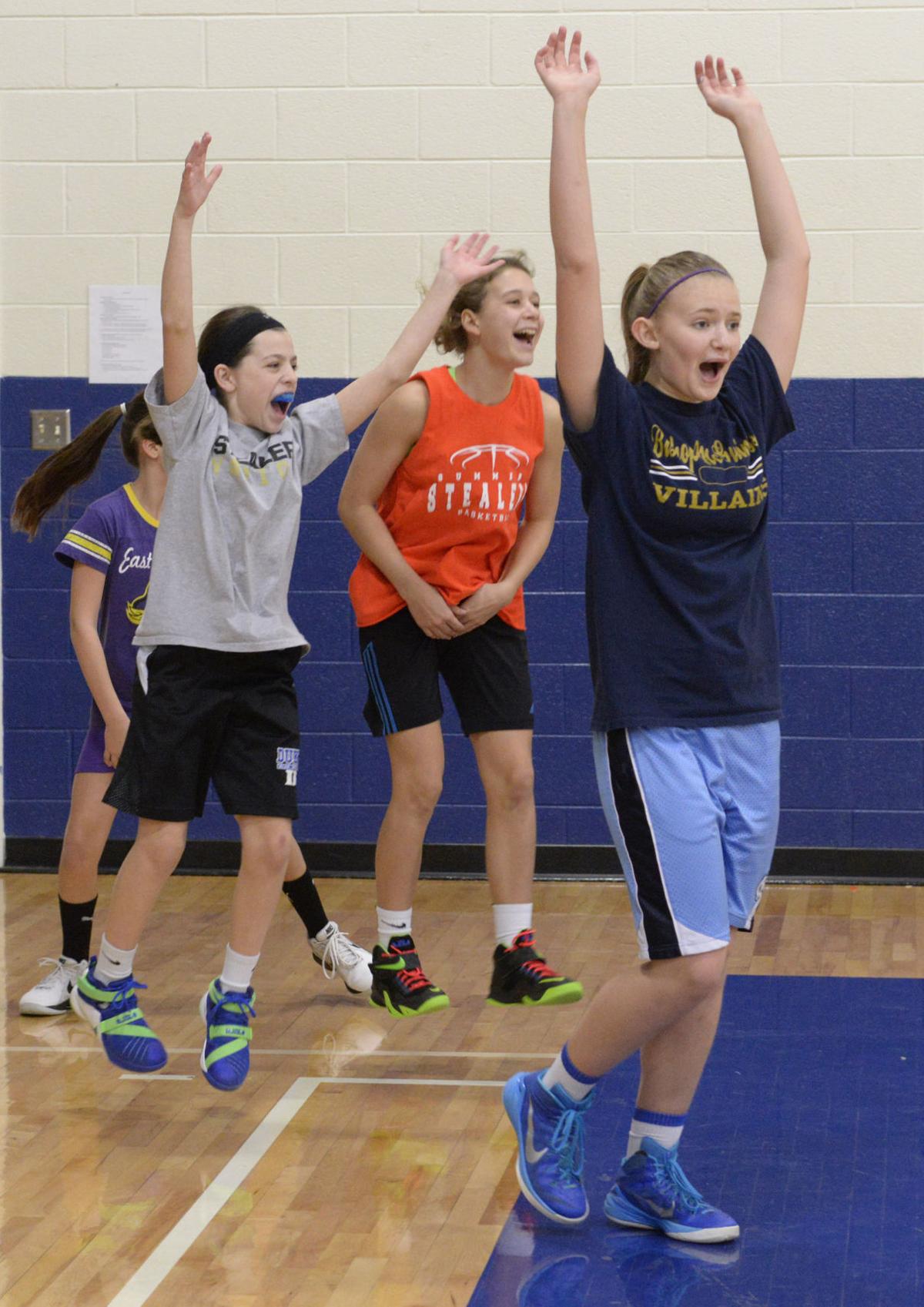 KERNERSVILLE — It’s not every day that “the best point guard in the world” stops by to give out her basketball knowledge to a bunch of eager players.

Sue Bird, who was given that title by her college coach, Geno Auriemma of Connecticut, smiles when she hears that.

“He’s obviously one of the best coaches in the world, so to have that kind of compliment from him means a lot,” Bird said.

When Bird was asked why Auriemma didn’t say best point guard in the universe she quipped: “I guess that means there is no basketball on Mars.”

Through his work with USA Basketball, Brian Robinson, the varsity girls coach at Bishop McGuinness, arranged for Bird to conduct three separate camps on Sunday for fourth- through 12th-grade girls. There were more than 20 girls at morning camp at the Gateway YMCA, and close to 40 more who participated in the afternoon camps at Bishop.

“To have somebody of Sue’s caliber here in the Triad is special because I really think she is somebody the girls can relate to,” Robinson said. “She’s only about 5-foot-9, and she calls herself crafty most of the time. But I just think it shows how much you can accomplish even if you are maybe limited in this game.”

Many consider Bird the women’s version of Magic Johnson because, like Johnson, she’s won everywhere she has played. She won state titles in high school in Queens, New York, and then won two NCAA titles at UConn, three Olympic gold medals and two WNBA titles with the Seattle Storm.

“I can’t remember if I won titles in junior high,” she joked.

Bird says at age 35 her career is winding down, and next summer in Rio she’ll likely compete in her final Olympics.

“My career has gone by fast,” Bird said. “But the thing is when I do look back on my career, there’s no disputing the winning. Either you won or you didn’t, but with everything else you can argue who is the best point guard or center and things like that.”

What Bird has been all her life on the court is the consummate team player, and she doesn’t hold back off the court, either. “Alongside some amazing teammates, I got to accomplish a lot of my goals,” she said. Her message to the girls in the camp was all about making teammates better. It’s about communication and not trying to do too much.

“I see a lot of point guards who try to do it all, but you don’t have to if you know your teammates,” she said. “I always made sure to study them and know what they could do.”

Bird has won nine titles in her career from high school to the Olympics, but she’s also paid the price with at least eight different surgeries. She says it’s a product of playing so much basketball at a high level during her star-studded career.

Robinson said Bird, who has already dabbled in broadcasting and will likely dive into it full time after her playing career is over, is a true role model.

“She’s not super athletic, not super imposing, but she’s smart,” Robinson said. “It’s good that she is somebody who has done so much with her talent, and I think that’s what we want the girls to hear from her.”

Bird loved her time on the court teaching the fundamentals at the camps.

“I think it’s a great opportunity ... to come into a small group like this and kind of teach them what I know,” Bird said. “It’s a short time, but if some of it sticks then that’s worth it.”

Bird, who grew up on Long Island, N.Y., had some sound advice about the game.

“There are so many different messages I try to give girls at those ages,” Bird said. “I guess the biggest one is to make sure you are having fun. Maybe one day it will be your job, but it shouldn’t be your job at age 14.

“You can learn a lot of valuable lessons when you are playing basketball.”

Bird was asked by Francesca Moya, a sixth-grader, during a question-and-answer period, if she is related to Larry Bird. “No, we aren’t related but we both have cool names,” she said.

As for her most memorable moment in her Hall of Fame career, Bird said there are too many to single out. But she is proud of the fact that she loved basketball at a young age and has never stopped loving it.

“Something I like to stress is I definitely wasn’t the strongest or the tallest,” Bird said. “And I get ‘I thought you were taller’ a lot. But I’m just a regular kid who grew up and loved basketball, and I kind of chased that dream. I try to pass on that message that it can be done.”

For a video interview with Sue Bird and Brian Robinson, see this story at www.journalnow.com