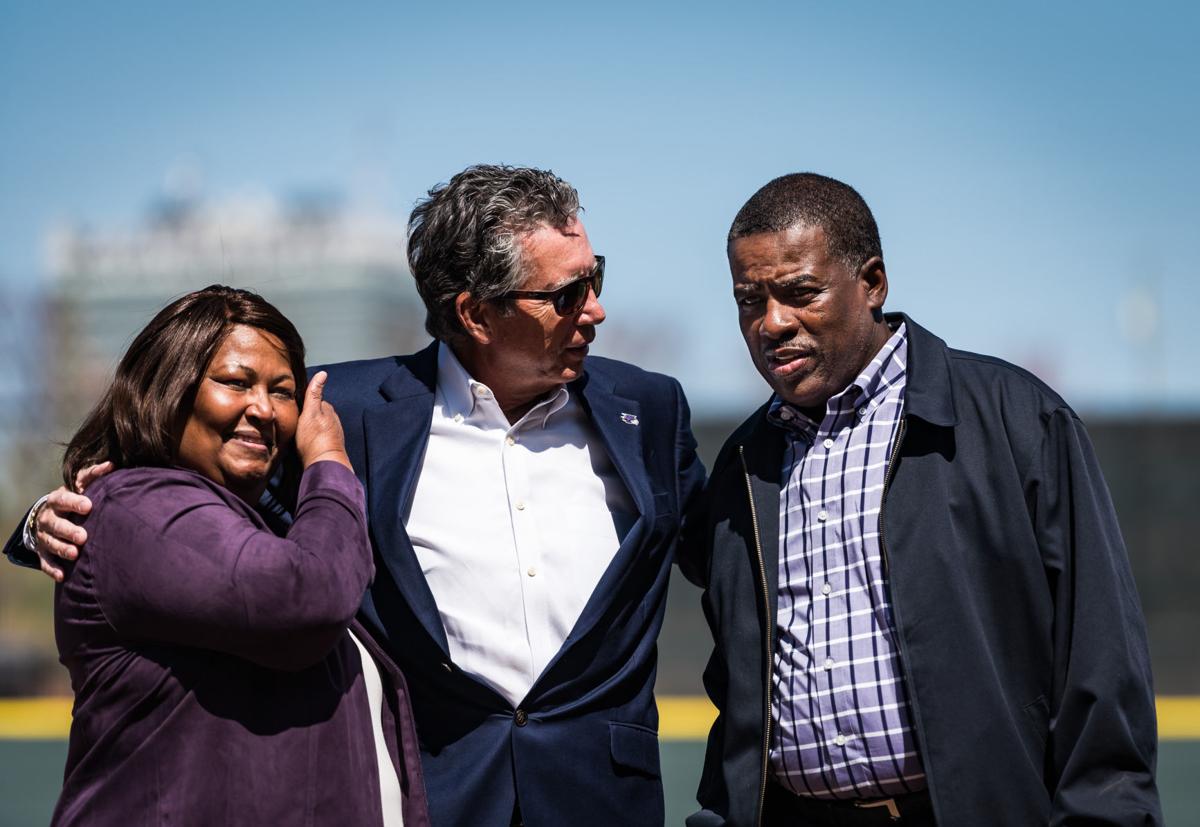 Billy Prim, majority owner of the Winston-Salem Dash (center), speaks to Robin and Charles Paul, the parents of Chris Paul, at BB&T Ballpark after the announcement Tuesday that Chris Paul is becoming a minority partner in the Dash. 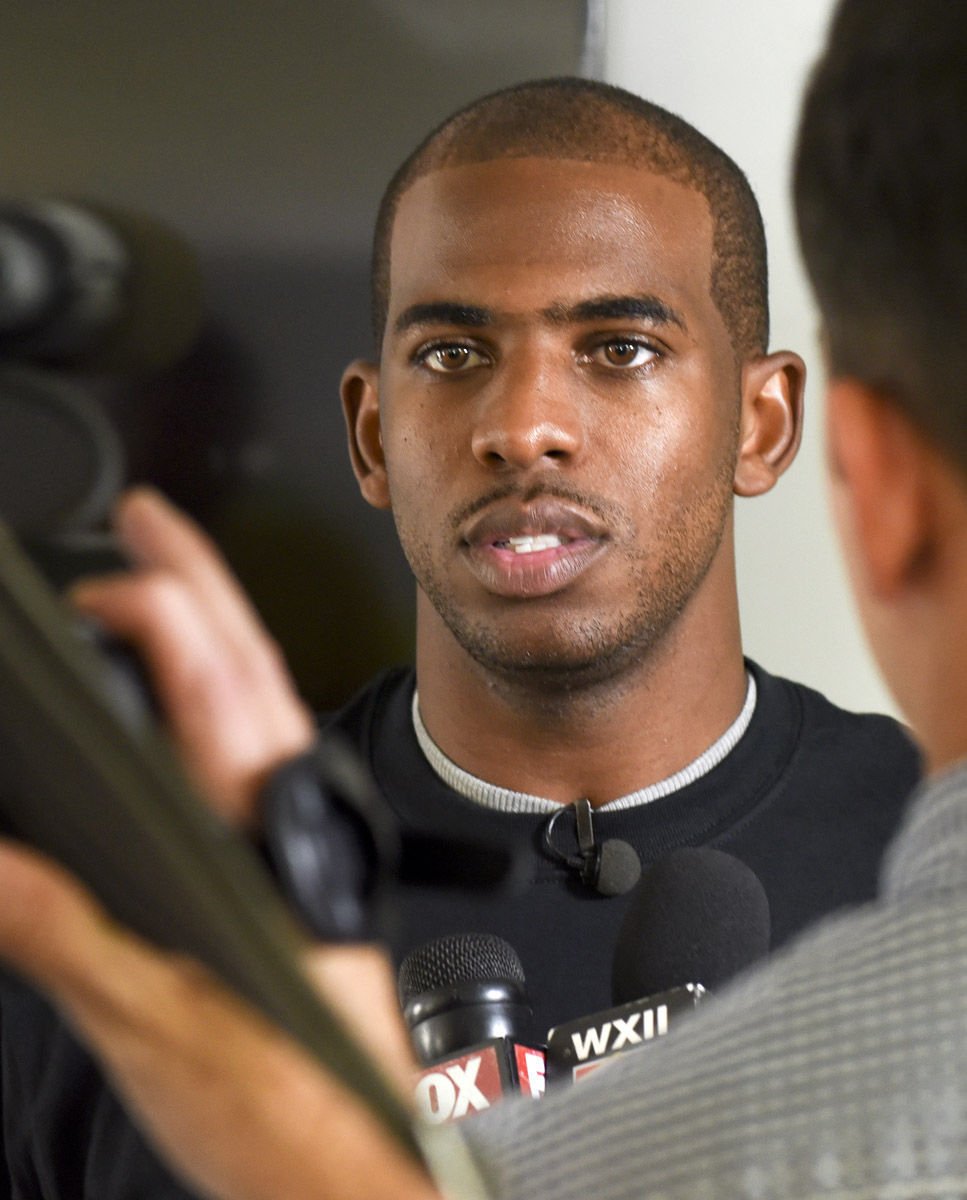 Officials with the Winston-Salem Dash said Tuesday that NBA star Chris Paul will become a minority owner of the minor-league baseball team.

Billy Prim, the team’s chairman and managing partner, and C.J. Johnson, the Dash’s president, made the announcement during a news conference Tuesday at BB&T Ballpark.

In a telephone interview with the Winston-Salem Journal on Monday, Paul declined to say what percentage of the Dash he would own or how much of an investment he’s making into the team. He referred questions about financial details of his investment to Dash management.

Prim also declined to disclose the amount of Paul’s investment in the team, and what percentage of ownership Paul would have in the Dash.

“We are a private company,” Prim said. “And we don’t disclose that for the protection of all of our minority owners.”

During the news conference, Paul, who plays for the Houston Rockets, appeared in a short video played on the park’s video board behind center field.

“I am excited to have the opportunity to become involved with a successful organization that has a positive impact on the community,” Paul said. “What could be more fun than being part owner of a minor-league baseball team in your hometown? Go Dash.”

Prim said that it’s great to have Paul as part of the Dash’s ownership group. Dash fans, the owners and Paul share a love of sports and competition, Prim said.

“What brought this together is our love for the city of Winston-Salem, and creating a great environment and city where people can live, work and play,” Prim said. “We believe that the Winston-Salem Dash is a big part of that. ... We are glad that Chris is going to join us to help grow that vision.”

Dash officials and Paul have talked about Paul acquiring an ownership share of the team for several years, Prim said.

“Chris has been a loyal supporter,” Prim said. “He’s been here several times. He has expressed in interest in getting involved whenever possible.”

Paul has many fans, and “he’s such a great example for all young athletes,” Paul said.

Having Paul as an owner will also add to the Dash’s media attention, Prim said.

“We look forward to brainstorming with Chris about ideas how this city can grow and prosper,” Prim said.

During the telephone interview, Paul said he isn’t buying shares from any current member of the Dash ownership group.

“When this opportunity arose, I jumped at it,” Paul said. “I have known Billy Prim for many years. This was an opportunity to be part of something (special) at home.”

Paul, 32, who was born in Winston-Salem and grew up in Lewisville, is a graduate of West Forsyth High School in Clemmons. He starred as a point guard for Wake Forest from 2003 to 2005.

During his NBA career, he has played for the New Orleans Hornets, now known as the Pelicans, and the Los Angeles Clippers. He was traded to the Rockets after the 2016-17 NBA season, joining James Harden.

Paul is the founder of the Chris Paul Family Foundation.

Paul said his investment in the Dash is part of the team’s plan to raise money “to do more things.”

Major League Baseball still must approve Paul’s buying into the Dash, which is a Class A Advanced minor-league affiliate of the Chicago White Sox.

Minor League Baseball, which is based in St. Petersburg, Fla., has approved the deal, Johnson said.

The Dash is playing its ninth season at BB&T Ballpark. The team will play its first home game of the regular season against the Carolinia Mudcats at 7 p.m. Thursday.

The team and its owners are excited to have Paul as part of the Dash’s family, Johnson said.

“He’s a little busy right now wrapping up the NBA season, and getting ready for the playoffs,” Johnson said.

Paul’s mother, Robin Paul, said at the news conference that her son often goes to Dash home games with his relatives and pays for local children to attend those games during the summer when he returns to Winston-Salem. Chris Paul also played tee-ball as a child, she said.

“He loves Winston-Salem,” Robin Paul said of her son. “As the Lord has blessed us, we have to bless others. We’re glad that he has that human spirit to help others.”