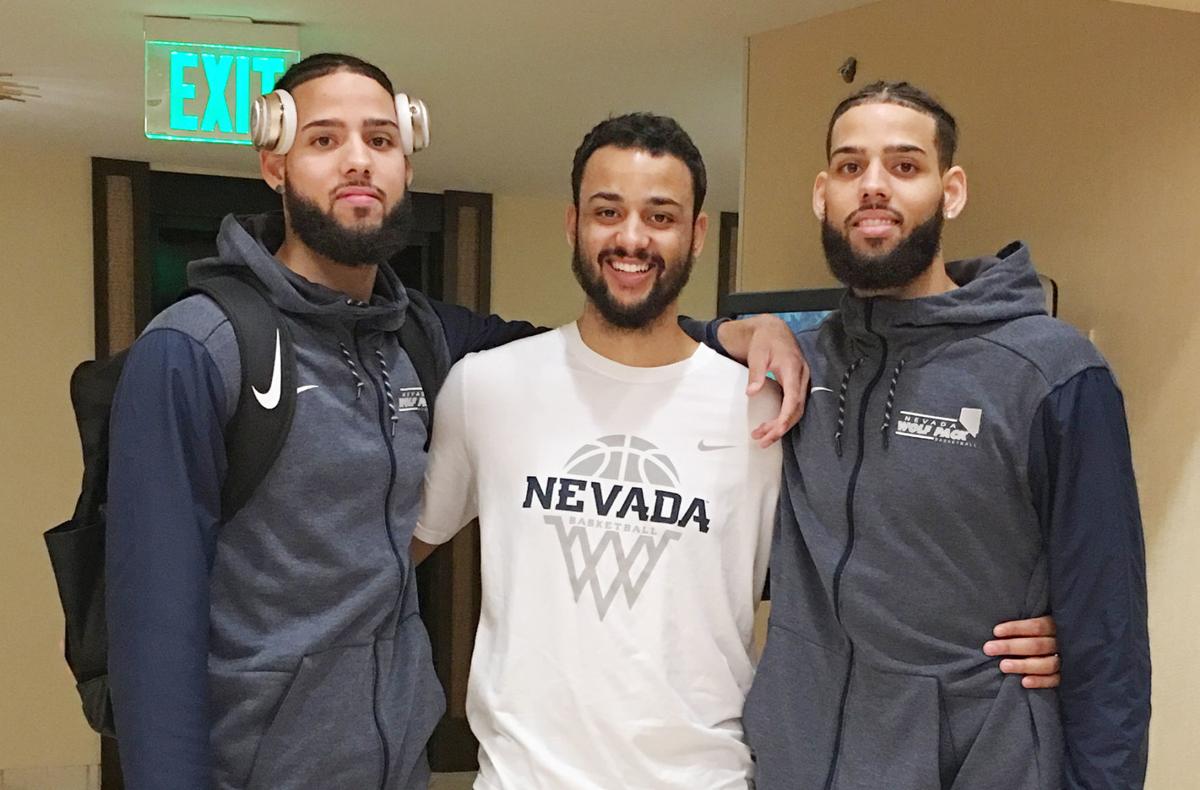 Raheem Martin (center) was a guiding force in the lives of his brothers, twins Caleb (left) and Cody. 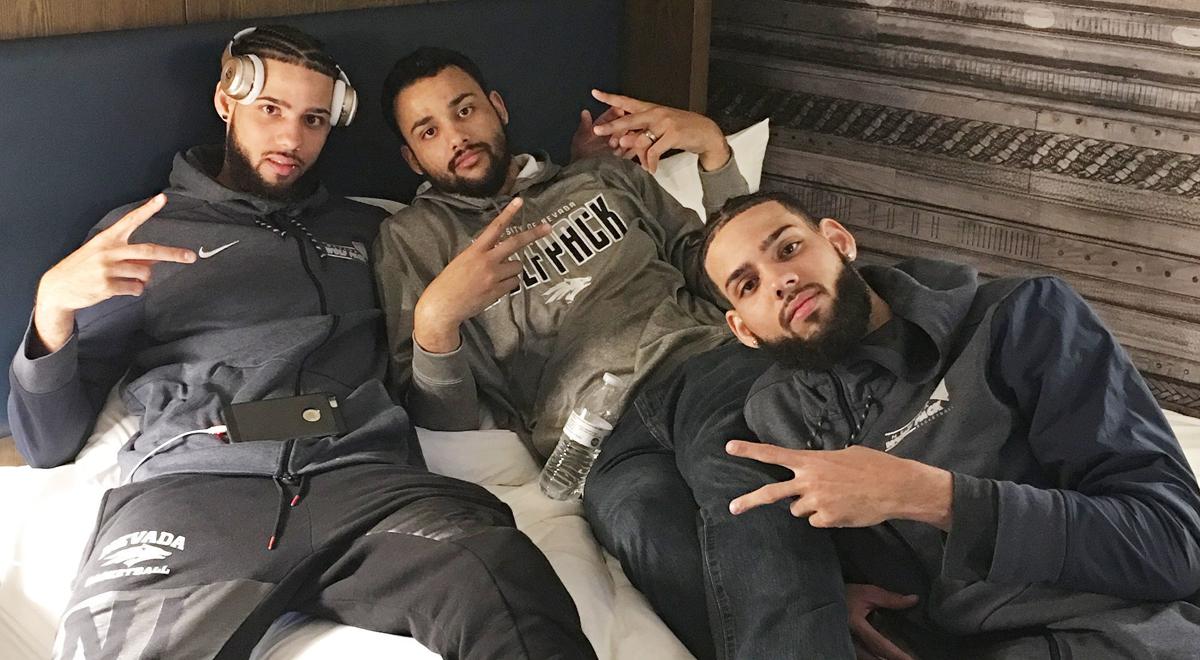 Caleb Martin (left) and his twin brother Cody (right) considered their older brother Raheem (center) to be “like a coach in our eyes ever since we started.”

Raheem Martin (center) was a guiding force in the lives of his brothers, twins Caleb (left) and Cody.

Caleb Martin (left) and his twin brother Cody (right) considered their older brother Raheem (center) to be “like a coach in our eyes ever since we started.”

The cheers amazed Raheem Martin. Really, a mixture of everything made the afternoon of March 22 surreal. Standing in Atlanta’s Philips Arena, he watched while his brothers, twins Caleb and Cody Martin, warmed up for a Sweet Sixteen game.

Caleb and Cody’s journey played out in Raheem’s mind while the twins, now junior forwards at Nevada, prepared to play Loyola Chicago.

The twins’ path is well known by now:

In a year’s span, Caleb and Cody went from transfers to stars to scooping up some of the Mountain West Conference’s top awards. Caleb was named both player of the year and newcomer of the year while Cody became the league’s top defender.

The moving seems worth it now, and the cheers confirmed that to Raheem. The shouts could be brief and subtle, or they could fill the arena at an almost thunderous level, following heroics from Caleb or Cody.

Raheem, who at 25 is three years older than the twins, responded to the noise with a small smile and a shake of his head.

“It’s been a long road,” Raheem said. “But if there is two people that deserves it, it’s them.

“They’ve spent a lot of long nights in the gym, getting kicked out of Davie saying, ‘It’s time to go home. You gotta come to school the next day.”’

Both Caleb and Cody will tell anyone that Raheem had a firsthand impact on all of it.

The older brother neglects to mention how often he was in the gym with them. And while Caleb and Cody worked toward their college basketball dream, Raheem was working on one of his own: becoming a coach.

‘We had to be tough’

He needed to take only two classes apiece in his final two semesters to graduate, and he planned to sleep late and leave early. But that dream never panned out.

Raheem’s senior year overlapped with Caleb and Cody’s freshman year, and Raheem was the only one who could drive.

“Senioritis kicks in that last semester, and I’ve only got class in the middle of the day,” Raheem joked. “But they were freshmen so that didn’t work.

“Anyway, it was stupid, I should’ve just taken four classes.”

That wasn’t the first time Raheem had to consider his younger brothers in his plan. Frankly, it’d become habit by then.

Growing up, the three brothers were raised by their mother, Jenny Bennett. With their father absent, Raheem matured into the man of the house during a 16-year span.

His big-brother role morphed into part-time caretaker as he became a teenager. That sometimes meant making dinner, sometimes meant chauffeuring, and always meant being around while their mother worked.

“I just tried to keep them out of as much trouble as possible,” Raheem said. “Kids are going to act like kids. I’m just a kid too, so we’re all going to mess up together.”

With so much time together, the brothers filled their schedules with basketball. The three had a basketball hoop behind their trailer, and it became a haven. Those matchups featured frequent domination by the older brother. At the time, Raheem towered over Caleb and Cody. That’s not the case now — Raheem is a solid 6-foot-4, which is 3 inches shorter than Caleb and Cody’s listed heights of 6-foot-7 — but it made for a frustrating time for the twins.

“He was so much bigger than me at the time,” Caleb said. “Usually, you let kids get a bucket here and there just to make them feel good, but he wasn’t like that.

“He was beating our shot all across the yard and into the woods, and he didn’t feel bad for us because he knew that we could be good and we had to be tough.”

Those sessions eventually became more detailed and organized. As the twins reached middle school, Raheem started bringing them to the gym. He set up cones, chairs and other obstacles for the twins to run around.

The practices happened often through the trio’s teenage years, and they continued sporadically as Raheem and his brothers went to college. While going through the drills, Caleb and Cody began recognizing what Raheem’s future held.

“He was definitely like a coach in our eyes ever since we started,” Caleb said.

Raheem’s dedication was no surprise to Mike Absher.

Absher, the Davie boys basketball coach, saw it every time the oldest Martin brother worked with Caleb and Cody.

Absher coached all three Martins at Davie. Caleb and Cody possessed evident potential to play at the top college level their freshman season. And Raheem repeatedly stood out to Absher by the coaching characteristics he demonstrated.

“I thought he kind of had an itch for it,” Absher said of Raheem’s coaching interest. “ He was a very smart player. His basketball IQ is very high.

“And I know that doesn’t always translate into being a good coach, but I felt like he had the traits to be that guy.”

During his senior year, he did an internship under Absher, where the coach watched as Raheem poured the same amount of effort into his volunteer assistant role as he had his brothers.

He would come into Davie early to clip up video for afternoon film sessions, help coach during the games and even scout future opponents.

Through his GC career, Raheem learned how much faster the college game was than high school. Speed became the focus of drills with his brothers. Going around obstacles, attacking the hoop and taking on aggressive defenders — everything had to be fast. Raheem hoped his training would help his brothers adjust to college easier than he did.

“It was going to be tough for us, and he knew that,” Cody said. “So he was just trying to get us as ready as possible.”

He can’t really say that his work with his brothers kicked off his coaching interest. But it did show him he had the skills to do the job.

“I think it was coming,” Raheem said. “I just got to work on my finer points with them, so that was a good thing.”

Nevada lost to Loyola Chicago that night, 69-68, ending a stellar debut at Nevada for the twins.

That season-ending loss, however, was preceded by two thrilling wins. Nevada beat Texas and Cincinnati — the first in overtime (87-83), and the second with a 22-point comeback (75-73) — in Nashville during the NCAA Tournament’s first two rounds before travelling to Atlanta.

Raheem got to watch his brothers play live three times in a week. Before that, it had been more than two years since he watched them play in person.

“It was awesome to see him there and for him to be able to come out and support us like that,” Cody said. “ It really means a lot. My big brother is everything to us.”

As the twins become even more comfortable and confident in Nevada, they can tell from 2,557 miles away their older brother is heading toward the right place, too.

“Honestly, it’s like fallen into place,” Caleb said of Raheem. “It’s something I could see from miles away, that coaching would kind of be his thing.

“...So you could kind of tell that was the kind of path that he was going to. It’s pretty cool.”