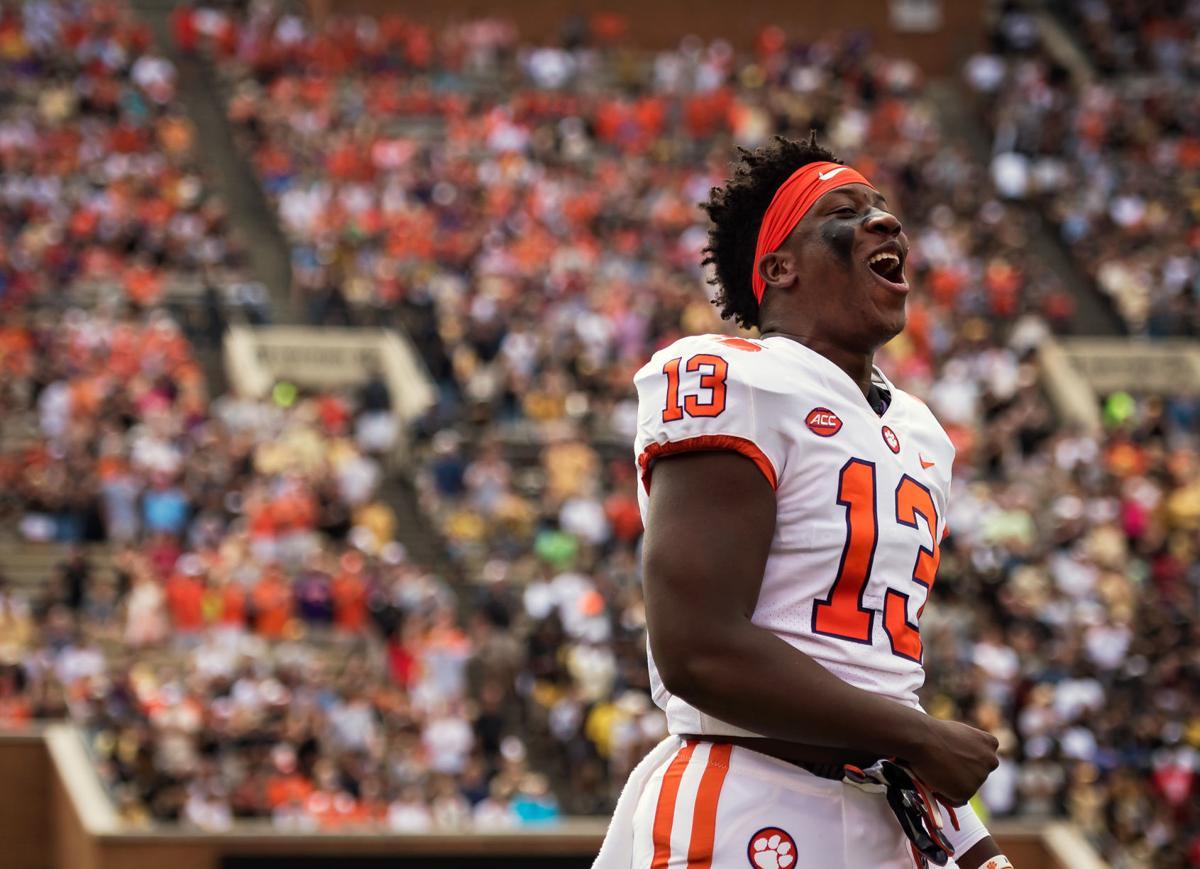 K.J. Henry, a freshman defensive end for Clemson, only played in four games this season, but one of them was in his hometown against Wake Forest. 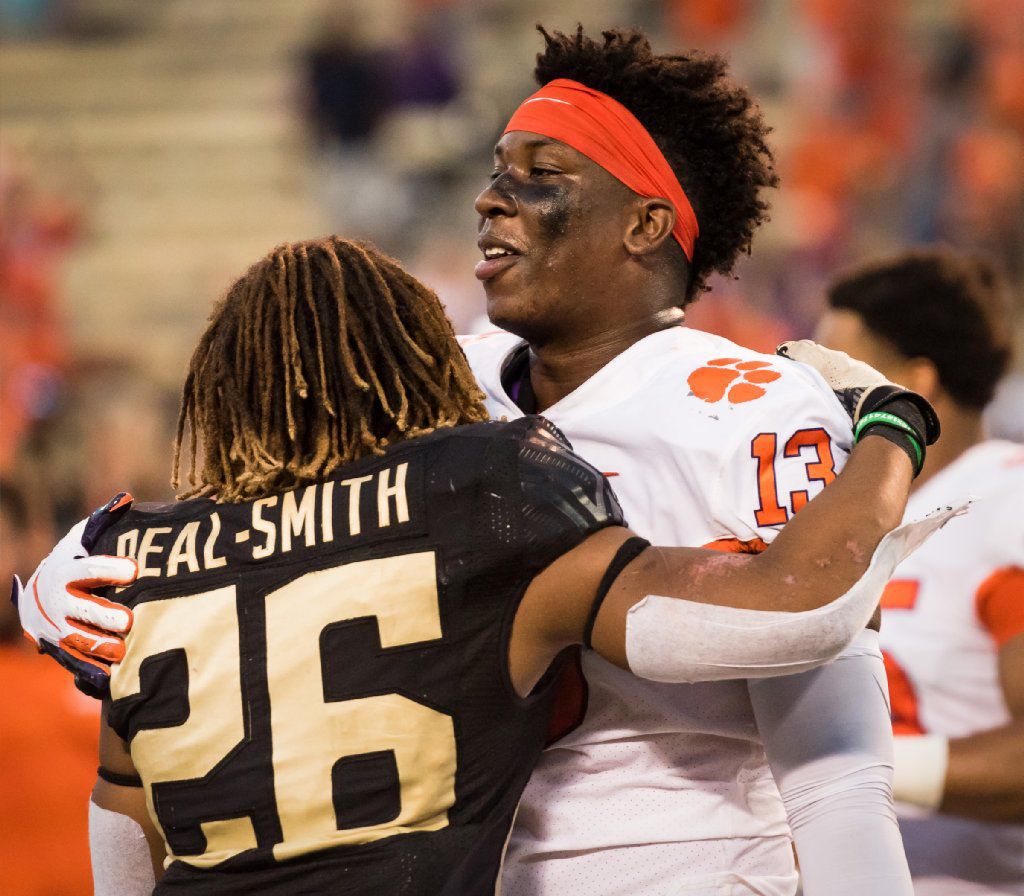 K.J. Henry of Clemson hugs Christian Beal-Smith of Wake Forest after the Oct. 5 game at BB&T Field. Henry had four tackles in the game. Henry, from West Forsyth, and Beal-Smith, from East Forsyth, played against each other in high school. 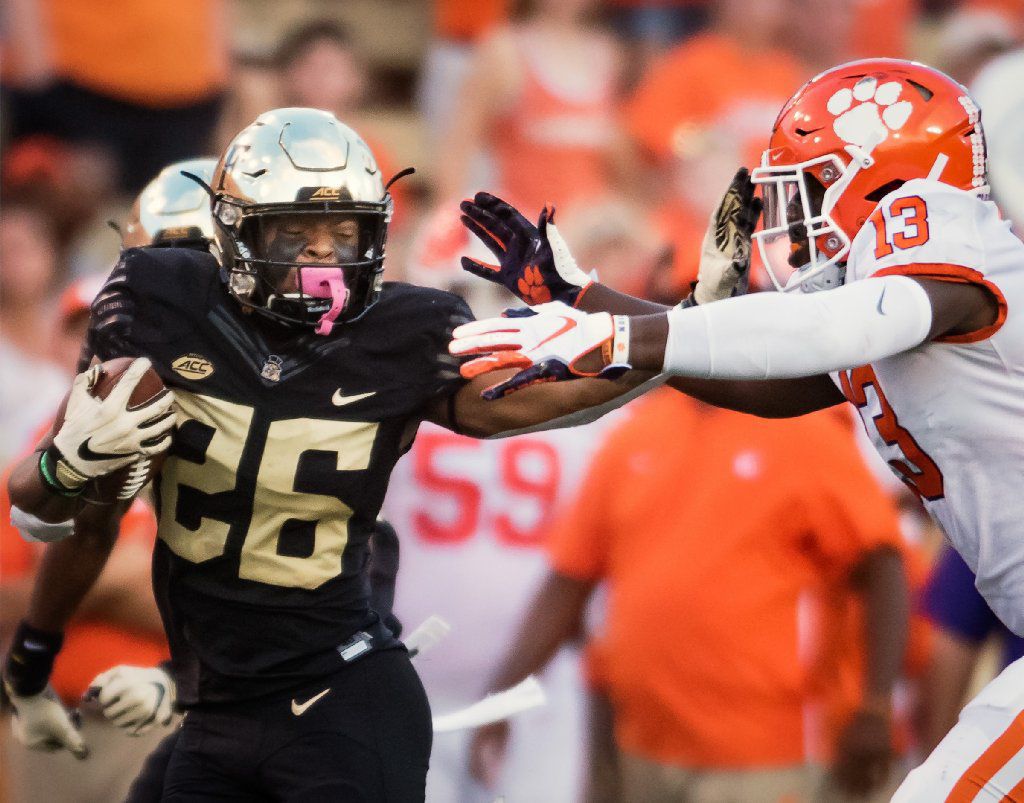 K.J. Henry, a freshman defensive end for Clemson, only played in four games this season, but one of them was in his hometown against Wake Forest.

K.J. Henry of Clemson hugs Christian Beal-Smith of Wake Forest after the Oct. 5 game at BB&T Field. Henry had four tackles in the game. Henry, from West Forsyth, and Beal-Smith, from East Forsyth, played against each other in high school.

Maybe another five-star recruit would be upset about being given a redshirt their first season, but K.J. Henry has been around the game long enough to understand the lay of the land.

Henry, a former star at West Forsyth, isn’t bitter or frustrated he won’t play in today’s championship game for the Clemson Tigers. Clemson takes on Alabama at Levi’s Stadium in Santa Clara, Calif., and Henry will be in uniform wearing No. 13 but won’t see any action.

Unless a cadre of injuries hits Clemson’s talented defensive line, he isn’t expected to make it onto the field. Three of the four starters along the Tigers line, including the suspended Dexter Lawrence, have the potential to be selected in the first round of this year’s NFL Draft.

“Coach (Dabo) Swinney and the rest of the coaches agreed that it’s best for me to have that redshirt season,” Henry said.

Henry appeared in four games for the Tigers (14-0), but NCAA rules say he didn’t use up a season of eligibility.

As it turned out, the 6-foot-4, 250-pound Henry played his final game of the season for the Tigers in his hometown.

During Clemson’s 63-3 win Oct. 5 against Wake Forest, Henry had his best game with four tackles, and two of those tackles were for losses. In his four games this season, Henry was in on 39 snaps and made nine tackles.

“Just being on the field there at Wake Forest was great, and we played well that day, so it was a big day for myself and my family,” Henry said. “I kind of knew the Wake Forest game would be my last time on the field barring a bunch of injuries or whatever. So I was grateful for that chance to play at Wake Forest and have my family and friends all there to watch.

“It was definitely a highlight for me because I literally grew up there when my dad (Keith Henry) was coaching at Wake.”

Coach Adrian Snow of West Forsyth marveled at how mature Henry was during his time playing for the Titans. Snow says that maturity carried over into Henry’s freshman season at Clemson.

“It’s amazing how well K.J. is handling everything this season,” Snow said. “And it doesn’t surprise me how well he’s handled being redshirted, and that new NCAA rule is a big part of that.

“For him to be able to still play in his hometown over there at BB&T Field in the Wake Forest game tells you all you need to know about Coach Swinney and the way they do things there.”

Keith Henry, a former assistant under Jim Grobe at Wake Forest and K.J.’s father, was most recently the running backs coach at UNC Charlotte. He’s been a college assistant coach for the last 29 years.

“Both Mom (Nikki) and Dad will be at the game in California and will fly in Sunday,” K.J. said. “And they were both at the Notre Dame playoff game as well, so it’s been fun for them even though they know I won’t be playing.”

The knowledge Henry has gained while watching and playing alongside the talented defensive line has been valuable.

“How can I not learn from those guys,” Henry said. “The way they approach everything on a daily basis is something I’ve watched closely. To know those guys are going to be drafted on that first night is going to be cool to see.”

Lawrence, who is also a freshman, has been spectacular in guiding the Tigers to the national championship game one year removed from high school.

Henry said it’s amazing how Lawrence has maintained his even-keel demeanor despite his popularity on campus and around the country.

“He’s a great dude and nothing bothers him,” Henry said about Lawrence, who is from Cartersville, Ga. “I think one of the reasons he’s been so successful is he doesn’t worry about what is going on around him. It’s just football, and that’s what we all focus on.”

Henry also says Lawrence’s faith is a big part of his makeup.

“I don’t think he gets enough credit for how great a guy he is off the field,” Henry said. “I’m big on my faith and he’s big on his faith, and seeing him do so well and seeing how he treats people is overwhelming.

“He treats people so well, and despite all the demand on his time, he makes sure to sign autographs, and he just has a respect for people.”

Because Lawrence plays on offense and Henry on defense, they help each other when it comes to the strategy of the game.

“He can give me some insights as to what the offense might be doing here or there and I can do the same for him when it comes to defense,” Henry said.

Henry has also taken care of business in the classroom with two A’s and three B’s during his second semester in college. He enrolled at Clemson last spring and says he has an 3.2 grade point average.

“We don’t start classes for a little while yet,” he said, “so right now it’s all about football and what we can, hopefully, accomplish.”

Henry hasn’t been surprised at how well the Tigers have played this season and is looking forward to more of the same during his time at Clemson.

“We look at this as the norm for us,” Henry said about reaching the title game. “We are a team that works hard all the time, and you can see how that hard work pays off. It’s going to be an amazing night.”