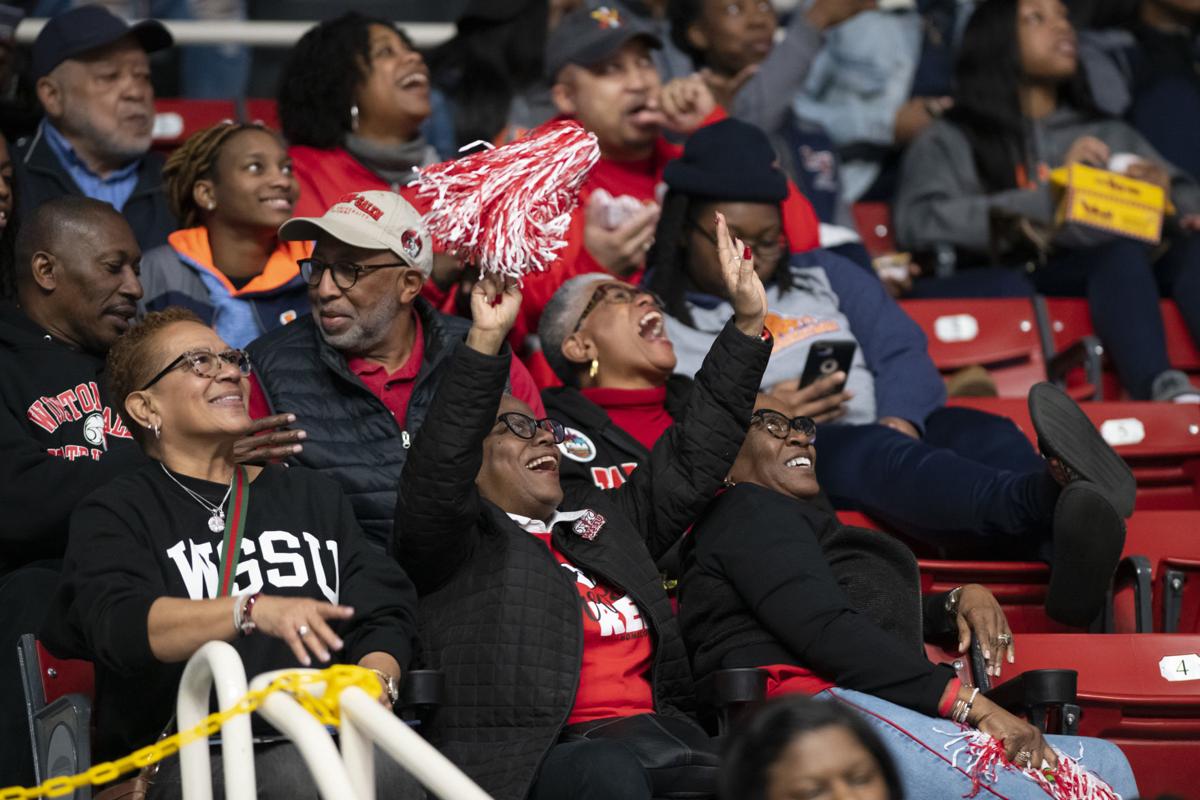 WSSU fans celebrate during Tuesday's women's game between WSSU and Claflin. WSSU won 61-50 to move to advance to the quarterfinals on Thursday. 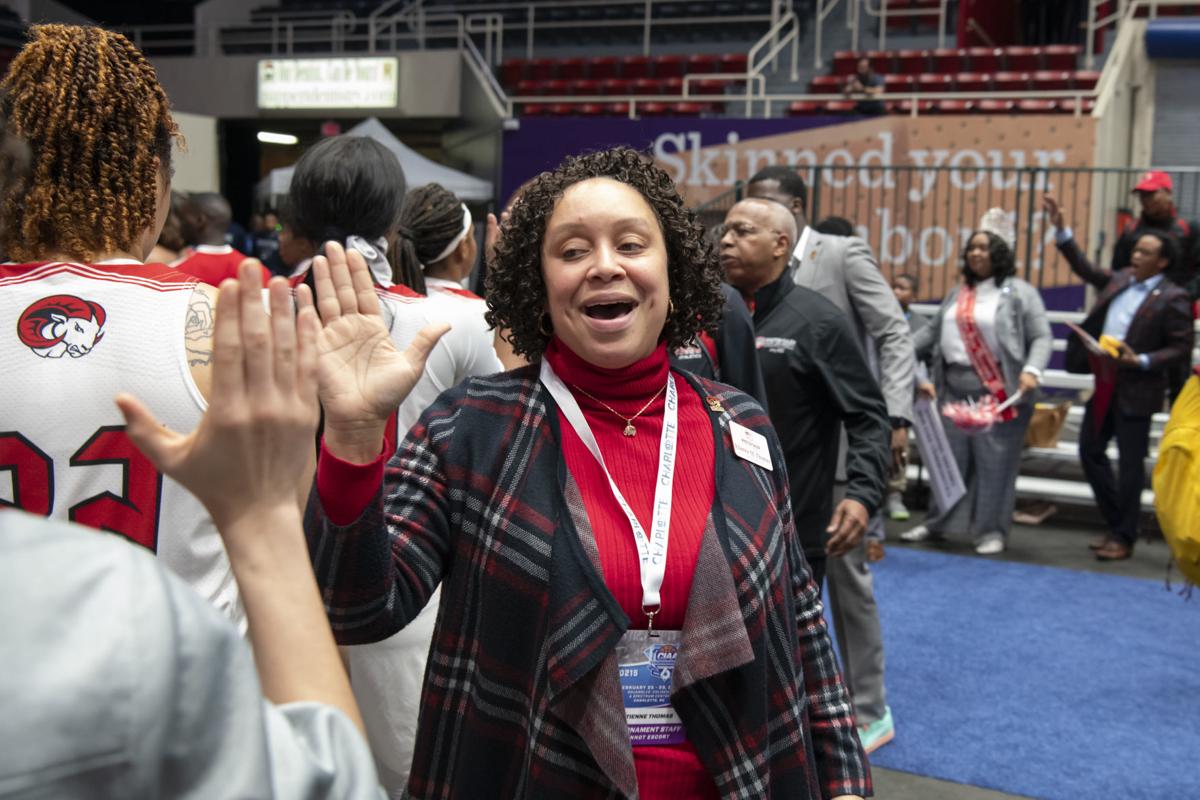 WSSU fans celebrate during Tuesday's women's game between WSSU and Claflin. WSSU won 61-50 to move to advance to the quarterfinals on Thursday.

The 75th edition of one of the oldest college basketball tournaments in the country is underway at Bojangles Coliseum and the Spectrum Center in Charlotte. This year’s tournament is historic in many ways because it’s the end of a 15-year run in the Queen City before it moves to Baltimore for the next three years. Reaching No. 75 marks quite an accomplishment for a Division II conference.

Adding to the excitement is that WSSU’s men’s team is the No. 2 seed and will play about 9 p.m. Thursday in a quarterfinal game against Bowie State or Livingstone. If the Rams win Thursday, they would play the late semifinal about 9 p.m. Friday.

It’s no surprise that WSSU gets the late games, especially when its programs are winning.

“They know what they are doing by putting us in the late games,” Chancellor Elwood Robinson of WSSU said this week. “Our fan base is strong as you know and we travel well, so the prospects of us making a run in the tournament is good for our WSSU brand.”

Robinson says that the Charlotte area has a strong alumni base that has been excited since midseason when the Rams started playing well under second-year Coach Cleo Hill Jr., the CIAA coach of the year. The Rams tied Johnson C. Smith for first place in the CIAA’s Southern Division.

What makes the buzz real around these parts so WSSU-specific is that nothing went right over the previous four seasons when the men’s team lost its first games of the tournament to bow out early. The Rams haven't won the championship since 2012 and last reached the championship game in 2015.

James Nelson, a 1967 graduate of WSSU, lives in Winston-Salem and has attended the tournament for as long as he can remember.

“It’s so nice to see them doing well and they can win it, no question,” Nelson said. “We plan to stay around Charlotte a little longer than in recent years.”

Bonitta Best, the managing editor of the Triangle Tribune in Raleigh and an award-winning writer, has covered the CIAA Tournament since 1999. She says having WSSU relevant again is a big deal.

“Winston is like N.C. Central used to be when they were in the CIAA with a large alumni base and fans that travel well,” Best said. “And when I think of the CIAA it’s about John McLendon (a former N.C. Central coach) and Big House Gaines because they were so important to the history of this league. Their ghosts are here, and seeing Winston as one of the favorites is definitely good for the league.”

Jacqie McWilliams, the CIAA commissioner, is overseeing her eighth tournament. She wouldn’t say what the impact might be on ticket sales if WSSU makes a run this week. She did admit that because it’s the last year here before moving to Baltimore, the tournament carries a different feeling.

“I think it’s every year if you have your nearby schools doing well, whether it’s Winston or Livingstone, because when Livingstone does well half of Salisbury seems to come to the tournament,” McWilliams said. “Historically, Winston-Salem State has done well throughout the years in this tournament but I just think it’s the overall vibe among all the schools because folks want to get tickets for the last one here in Charlotte.

“We are set to have a great week, so we’re excited about how this will play out.”

WSSU has one of the largest student bodies in the CIAA with just more than 5,500 undergraduates. Robinson says Mecklenburg County has the second-most alumni in the state behind only Forsyth County.

“Bowie State, Fayetteville State and Virginia State also have large student bodies,” Robinson said, “but having the tournament here in Charlotte does add to it because of so many alums in this area.”

Robinson says that what he’s seen with the basketball team coincides with his vision for the entire university.

“It takes time to build and have everything in place, and with our new AD (Etienne Thomas), we are in a good place and we want to grow athletics,” Robinson said. “I just feel like this tournament and this week will help us. We are in a good place, and even if something crazy happens early in the tournament and we aren’t as successful, I’ll still be very happy with the direction of both the women's and men's basketball programs.”

The CIAA doesn’t keep attendance figures from year to year, but there has been more of a demand for tickets from WSSU fans, according to Robinson.

“Oh yes, there has been a lot of energy around the tournament and it’s just a different vibe,” Robinson said. “I don’t know what it is, but I don’t think it’s just about Winston-Salem State. I just think there’s something about it this year that if feels different to me.”

Robinson, who is an avid basketball fan, wasn’t about to jinx the Rams when asked if they can win three games in a row to claim the school’s 12th CIAA title.

“Ask me again on Saturday,” he said.