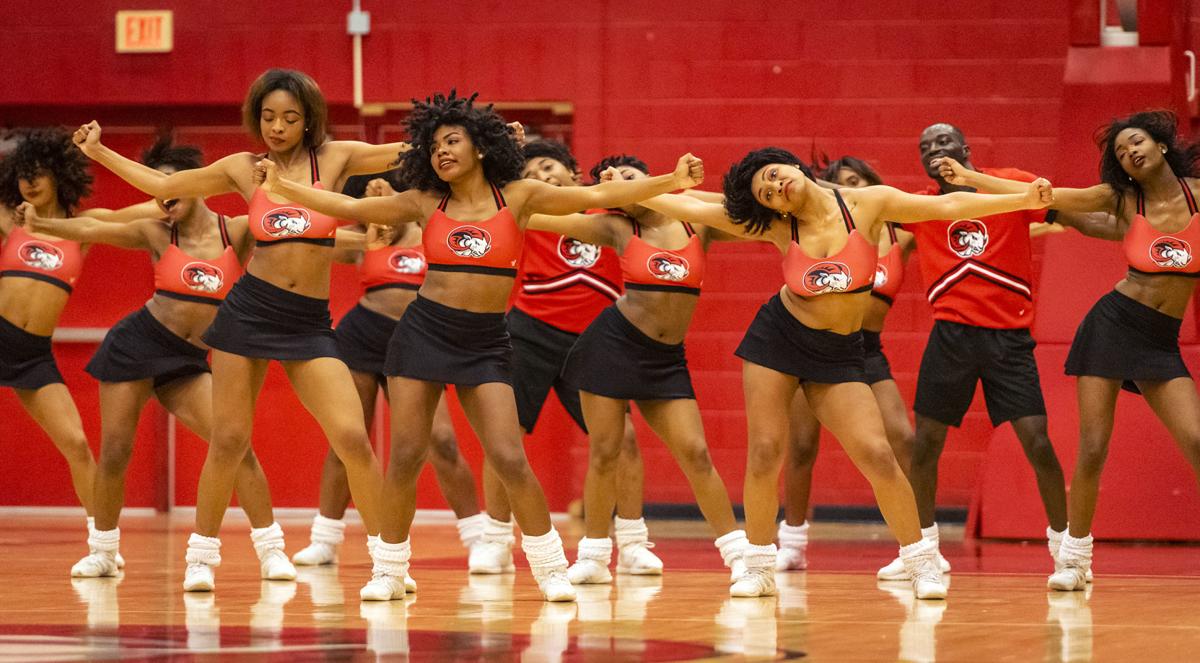 Winston-Salem State’s cheerleaders perform during a timeout on Saturday against Fayetteville State. 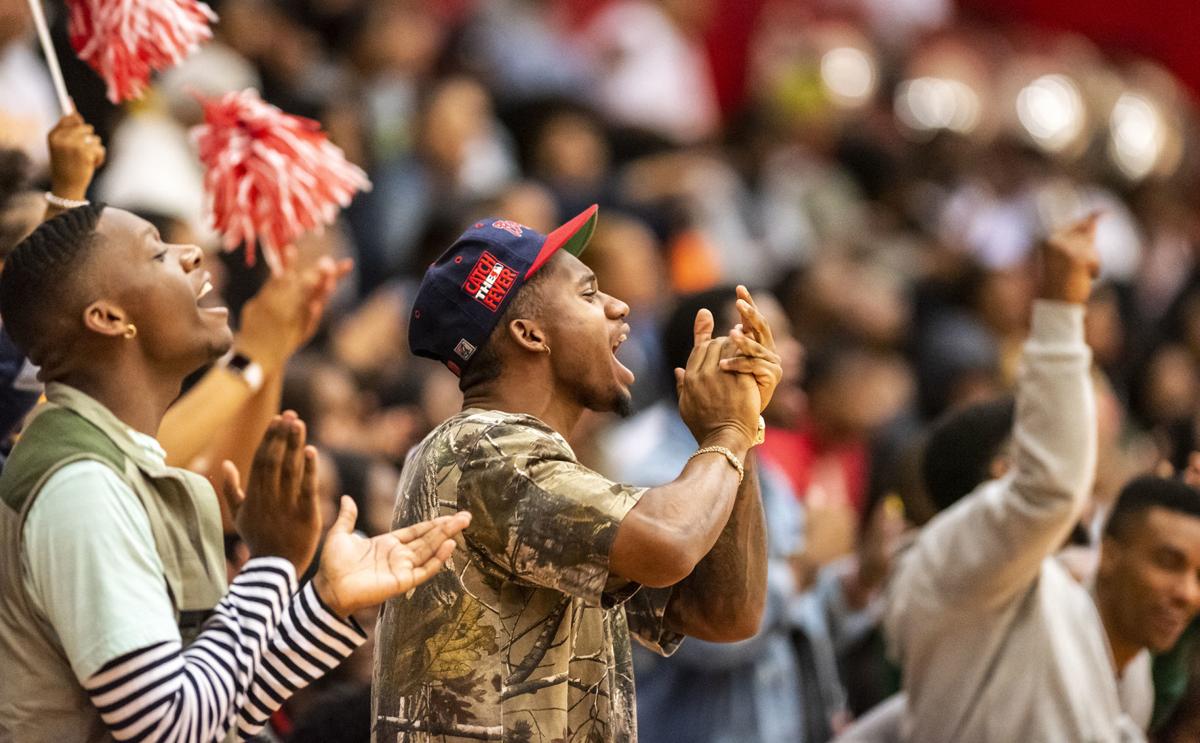 Fans cheer during a recent WSSU basketball game inside the Gaines Center. 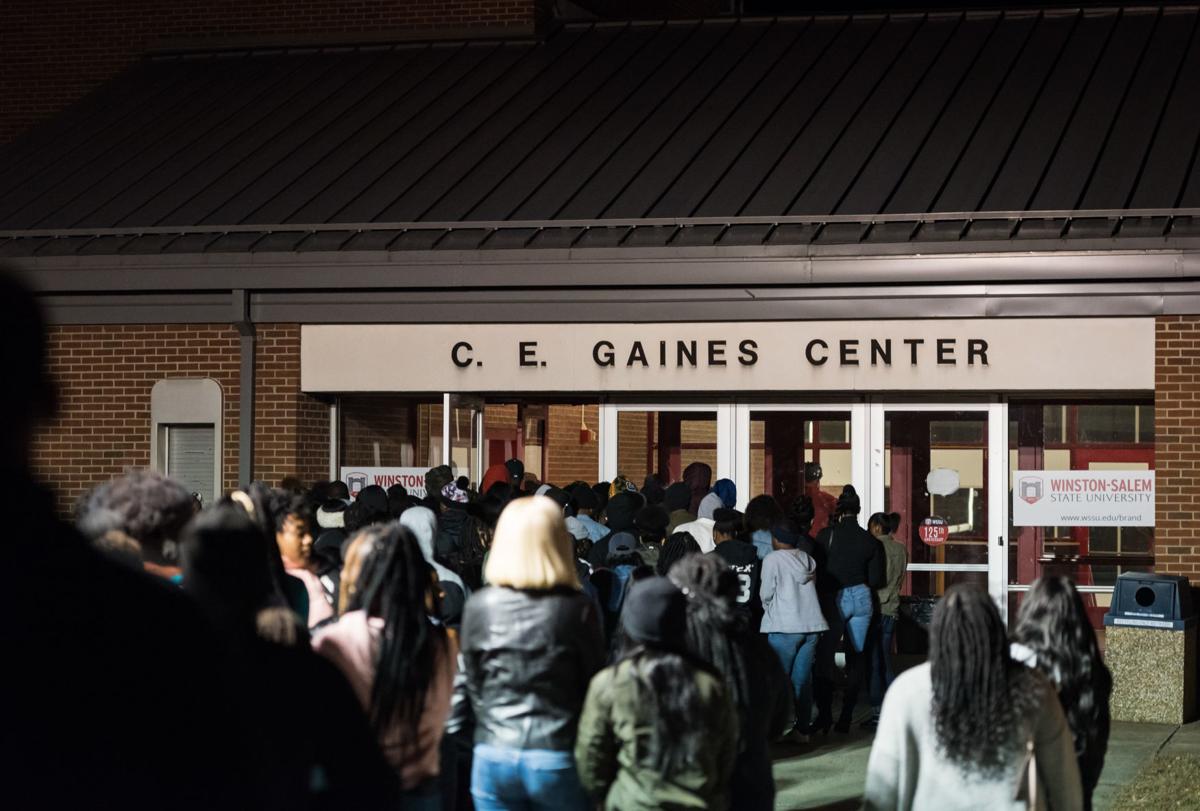 Crowds of fans wait in line for a game at the Gaines Center. This is the entrance where the students are admitted.

Winston-Salem State’s cheerleaders perform during a timeout on Saturday against Fayetteville State.

Fans cheer during a recent WSSU basketball game inside the Gaines Center.

Crowds of fans wait in line for a game at the Gaines Center. This is the entrance where the students are admitted.

Winston-Salem State students once just "watched" basketball games at the Gaines Center. This season they are "experiencing" the games.

That’s the vibe going around as the students have made more of an effort to cheer the women’s and the men’s teams in CIAA doubleheaders. And the atmosphere inside the building that was named for Big House Gaines, the legendary coach and athletics director, has been an obvious difference.

What doesn’t hurt is the winning, especially with the men’s team leading the Southern Division in the CIAA with second-place Johnson C. Smith coming to the historic building on Thursday night. The Gaines Center, which has no air conditioning and opened in the late 1970s, was big enough back in the day when the enrollment at WSSU was around 2,500, but it could use an expansion.

Enrollment at WSSU is up to 5,200, and just getting inside the Gaines Center for students is hard to do this season. Lines start forming around 4 p.m. on weekdays for the 5:30 women’s game, and by the time the men’s game starts students have been turned away because there’s no more room. About 200 were turned away Saturday.

Coach Cleo Hill Jr., who is in his second season, has the Rams playing their best basketball of the season having won four in a row. What makes Thursday’s game better is the Golden Bulls are probably the Rams' biggest rival in the CIAA.

“The crowd was outstanding,” Hill said about Saturday's sold-out attendance of about 2,700 in the win over Fayetteville State. “The Gaines Center is our sixth man for sure.”

There was a buzz inside of the Gaines Center on Saturday, and it felt different than in the past few seasons. It should be even more hyped on Thursday night.

A bonus for the students getting there early is the women’s game is being played, but instead of sitting on their hands, they are cheering just as loud.

“It’s great to see the students at our games and I know my players appreciate it and myself and my staff love to see the Gaines Center filling up for our game,” Coach L’Tona Lamonte said of the women’s team.

Hill reached out to those students waiting in line on Saturday and bought pizzas to share while they were waiting.

“It’s the least we can do for them because our students really make the Gaines Center come alive,” Hill said.

Montrell Davis, a 2015 marketing graduate from WSSU who goes by the stage name of DJ Trellz, has a thriving music business. He lives in Winston-Salem but travels all over the country putting on shows, and he is also the disc jockey at N.C. State for women’s basketball games.

Davis continues to help the current disc jockey, D.J. Diesel, during home games at WSSU. He says the students are more engaged because they have learned to come prepared to dance in the aisles (or even on the floor during timeouts), sing along with the songs and they also make sure to harass opposing players.

“The court is so close to the stands and opponents sometimes can’t handle it,” Davis said. “They are surprised when we all call out their names because we have rosters that we give out to students before each game.”

Davis said two seasons ago when the Rams won just five games, the Gaines Center would still be packed but the spirit wasn’t the same.

“We lost so many close games that season,” he said. "And I just think the students are more into it this season."

Adding to the experience of game day is the Red Sea of Sound, the school’s award winning band that sits on the same side of the court as the students. One of the band’s favorite tunes, "Get Up," is played right before the game starts and has been a traditional pre-game song in football and basketball for several years. The cheerleaders are also a big part of the experience, and they don’t walk into the building, they strut in and take their place on the court for the introductions of the starting lineups.

Then there is public address announcer, Devin Pass, who goes by DP the MC, who says the students are doing their parts in a big way.

"It's not not cool to have school spirit anymore," said Pass, a former WSSU student who also has his own music company.

Pass, who is the public-address announcer for the first time this season, has hosted many events at WSSU and at other college campuses. He’s made sure to keep fans engaged by letting them know the score. A lot of students aren’t looking at the scoreboard because they are busy checking their phones.

"What is happening is the players really appreciate that the students show up and winning games obviously helps," Pass said. "It's just the cool thing to do right now on campus and that's go to games and support."

Another help is social media, particularly Twitter. Pass and Davis have a large following of more than 50,000 followers, and they keep students engaged that way.

"Social media does help us and that's how we make sure students know when to get to the games," Davis said. "There are a lot of things going on during a game but I think everybody is locked together on the same thing and that’s about cheering on the teams. Everybody has been doing their part and I think the players appreciate that.”

Jon Hicklin, a sophomore guard in his first season with the Rams (10-8 overall, 8-2 in the CIAA), says the energy of the Gaines Center gives him energy during games.

“Our fans really know how to react and we get excited playing in front of them,” Hicklin said.

Colon and fellow senior Julius Barnes are the only four-year seniors on the roster and have played a lot of games inside the Gaines Center. Colon, the ninth-leading scorer in school history, said Saturday's excitement level was off the charts.

“This was one of the best atmospheres since I’ve been here,” Colon said looking around at the crowd, “and we all loved it.”

Ranking the hardest places to play in the CIAA isn't easy

I've covered the WSSU and CIAA for the last 23 years, and I've been to just about every gymn…