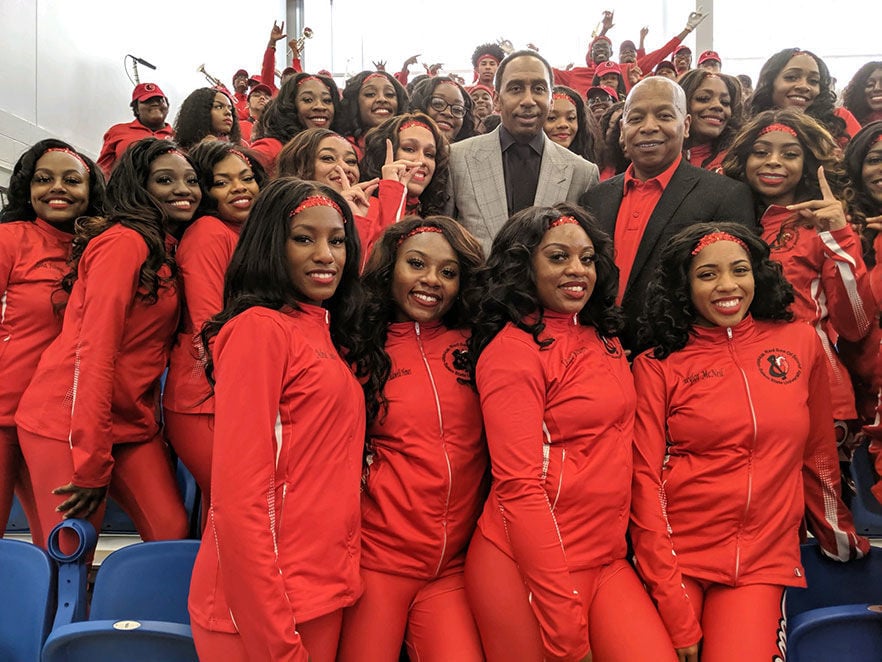 Stephen A. Smith, left, and Chancellor Elwood Robinson of WSSU pose with the Red Sea of Sound during Smith’s ESPN show “First Take.” 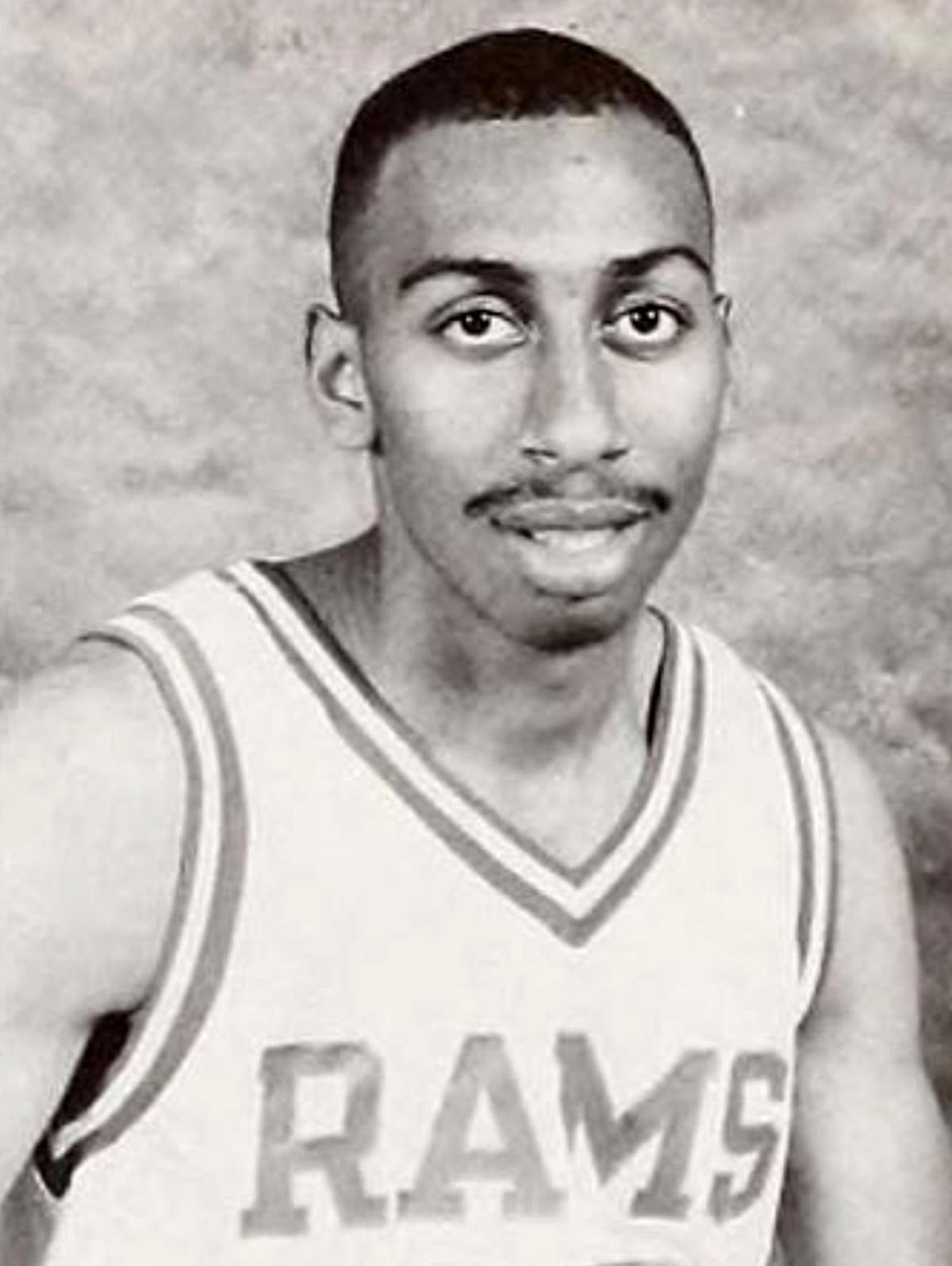 Stephen A. Smith played basketball at WSSU in the late 1980s.

Stephen A. Smith, left, and Chancellor Elwood Robinson of WSSU pose with the Red Sea of Sound during Smith’s ESPN show “First Take.”

Stephen A. Smith played basketball at WSSU in the late 1980s.

Stephen A. Smith doesn’t like surprises, but the one he received on Friday during his own show on ESPN was a good one.

Smith, whose popular “First Take” show has been a big hit, is one of the most recognizable TV sports personalities in the business. He’s also a Winston-Salem State alum, who had no idea the school would be naming an athletics scholarship after him.

“It means the world to me,” Smith said in a phone interview on Saturday night from Los Angeles. “I’m incredibly humbled and I had no idea the chancellor (Dr. Elwood Robinson) was there, so for them to do that is something I never thought would be possible.”

Robinson, George Knox, the interim athletics director at WSSU, and James DuBose, an assistant athletics director, presented Smith with a check that spelled out the details of the Stephen A. Smith scholarship. The school has started to take donations to make the scholarship a reality.

Smith, a 1991 WSSU graduate who played basketball sparingly for the Rams because of a knee injury, was signed by Big House Gaines out of New York City in the late 1980s. He ended up cracking a kneecap during his freshman season at WSSU and was never the same on the court.

He has never been short on opinions and also has a popular radio show, so when he lent his name to the celebration of HBCU Week, it was something he believes in. Part of the celebration was held at Delaware State, and Smith’s show was aired at the Philadelphia 76ers training camp in Wilmington, Delaware.

“I know what HBCU’s have done for scores of people all around the country,” Smith said, “and I know what Winston-Salem State did for me.”

The Red Sea of Sound, the award-winning Winston-Salem State band, was also part of the First Take show, and several of his former teammates with the Rams also surprised him. They presented him with a large cutout of a black-and-white photo from his time as a WSSU basketball player.

To cap off the weekend, Robert Massey, the interim head coach of the football team, said after the Rams won their first game of the season with an impressive 23-20 win at Tuskegee that the victory was dedicated to Smith.

“I think it was big that we got this win and dedicated it to Stephen A.,” Massey said after the win. “He knows the value and importance of all HBCU’s, so this win was for him.”

Smith, who is in the Big House Gaines Hall of Fame and the CIAA Hall of Fame, was again humbled by the gesture from Massey and the football team.

“I found out about three hours ago that they did dedicate the win to me and that’s incredibly touching,” Smith said. “I certainly didn’t expect that.”

Smith, 51, is passionate about what he does for a living and says there’s plenty of pressure to continue to be successful.

“There’s a standard you want to live up to and it’s about reaching for your goals,” said Smith, who started his career at the Winston-Salem Journal as a part-time clerk in the sports department when he was a student at WSSU. “There’s a lot of nonsense going on, and it’s about being true to yourself and having good character.”

Smith, who was a mass communications major at WSSU, worked his way up the newspaper ranks, starting with the Winston-Salem Journal and then going to the Greensboro News & Record before hitting it big with the Philadelphia Inquirer and the New York Daily News.

He’s donated to his alma mater on a consistent basis and as part of that devotion to WSSU, it made sense to start a Stephen A. Smith athletics scholarship. According to DuBose, this is the first time a former athlete’s name has been associated with an athletics scholarship. There’s also a fully endowed Big House Gaines scholarship as well, named for the late basketball coach and athletics director who died in April of 2005.

Smith said he owes a lot to Gaines, and suspected he would be proud of the scholarship in Smith’s name.

So let me get this straight . . . the Chancellor, an interim AD, and an ASSistant AD "presents a check" to an alum "spelling out the details" of a scholarship named after said alum, and are actively seeking donations to make said scholarship a reality honoring this alum who's 2019 net worth is estimated to be $10M, including an annual $3.5M salary from ESPN and $1M from his SiriusXM radio show, yet can't get their "House" in order to hire a permanent football coach AND permanent athletic director? Give me a break, this Planters Peanut chancellor has managed to further embarrass WSSU with each and every passing day. And if the INTERIM football coach considers a 3 point victory (despite being outscored in the second half 10 -7 after carrying a 16-10 lead into halftime) "inspired second half play," then he's not making a strong case to have that "interim" title removed.