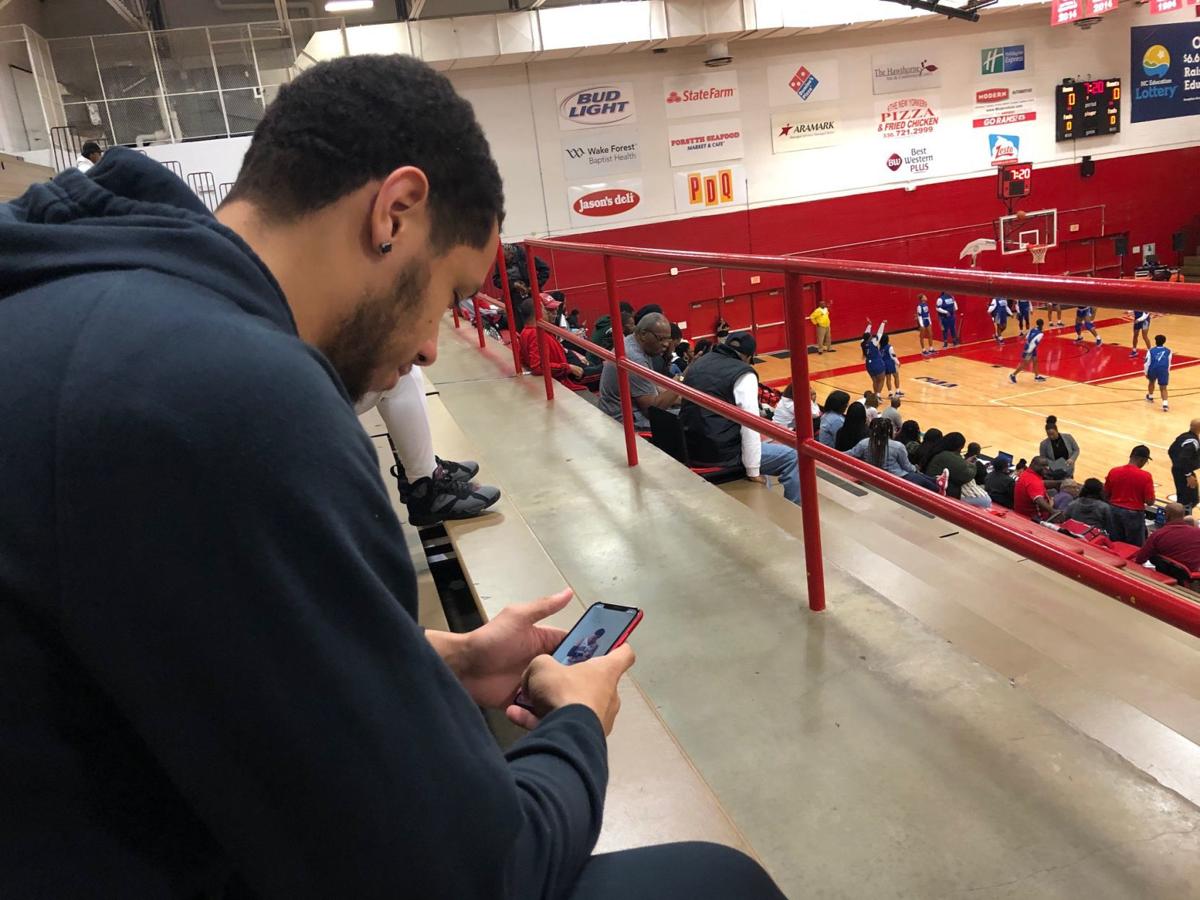 Dontae Caldwell of WSSU checks his phone while watching the women’s basketball game at the Gaines Center. Coach Cleo Hill Jr. of the Rams has a strict social media rule after games. 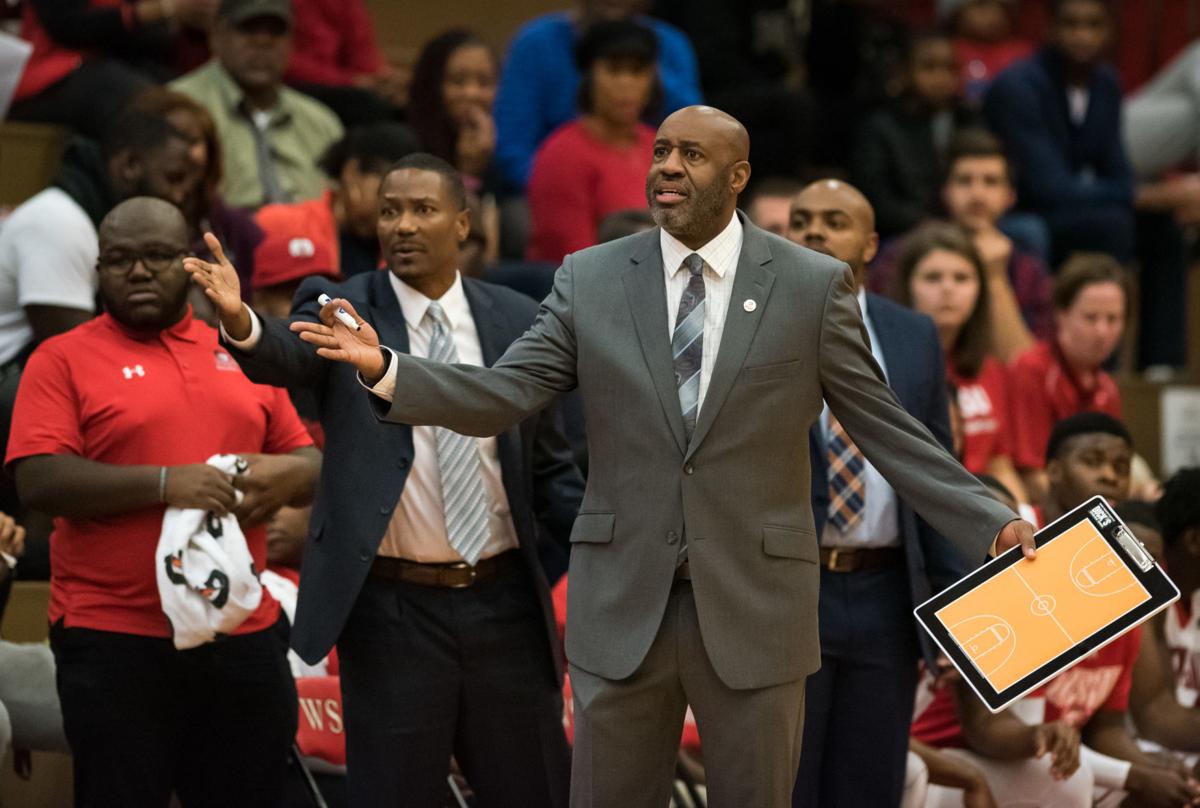 Dontae Caldwell of WSSU checks his phone while watching the women’s basketball game at the Gaines Center. Coach Cleo Hill Jr. of the Rams has a strict social media rule after games.

The win was probably the biggest in Cleo Hill Jr.’s two basketball seasons at Winston-Salem State on Saturday — a 63-61 victory over Virginia Union.

And naturally, the Rams floated to their devices after the game to check out social media and what friends, family and fans might be saying. The Rams might have been tempted to start voicing what transpired on the court to those social media sites, but they resisted.

They resisted because Hill and his coaching staff have a firm rule, a mandatory 24-hour period, about posting anything, positive or negative, to social media after a game. They can look, but they can’t touch.

“I wait, too,” Hill said. “You always have emotion, either good or bad, when you win or lose. So I think it’s good for everybody.”

Hill, who is active on social media and has his own website https://www.cleohilljr.com/, said the rule evolved from an idea by assistant coach Lance Beckwith. It’s not something the coaching staff did last season, but with a younger team, Hill and Beckwith thought the team rule would be beneficial to all.

The Rams also had to hold off from their devices after Monday’s disheartening 69-68 loss to Elizabeth City State at the Gaines Center. The Rams led for the majority of the game but stumbled late in the designated non-conference game.

Beckwith said that phones are also prohibited at the table during team functions.

“We want guys communicating with each other instead of on their devices,” said Beckwith, who just turned 30.

When Hill was coaching at Shaw a few years ago, he admits to not remembering social media being such a big deal.

Jaylen Alston, a sophomore guard, says he dabbles in social media but isn’t as big of a consumer as teammates Rob Colon or Jon Hicklin. Colon keeps his Twitter feed jumping most of the time with basketball workouts or summer weight room workouts.

“After a win or even a loss, you don’t want to post something you might regret,” said Alston, who was suspended by Hill for the Elizabeth City State game for reasons not related to social media. “It gives you time to think about things a little more and you have time to really calm down after a game, because this game is emotional. You don’t want to be emotional on Twitter.”

Last season the Rams had seven seniors, and Beckwith said the team rule wasn’t needed because they had such an older team. Beckwith had a few discussions with a player or two last season about posts, but nothing major. And Hill said the team has adjusted.

“It’s not that hard of a rule, actually,” Colon said. “I still look, but we aren’t allowed to post anything, so that’s the rule.”

Colon said he’s on just about every social media site there is.

“I’m on everything so I like it,” said Colon, an All-CIAA performer and a senior who has scored more than 1,000 points in his four seasons.

Criticism of Colon during his four seasons has shown up on social media, but he knows that’s part of being a college basketball player, even at the Division II level.

“When we lose there is some backlash from fans and things like that but that’s expected,” Colon said. “But it’s nice when we win and you can see what people are saying.”

Hill and his staff, which includes assistant Eric Wilson, monitor social media sites and their players.

“Everybody has done pretty well, and they know we are watching,” Beckwith said.

Xavier Fennell, a sophomore forward, isn’t that big into social media but he does keep an eye on it.

“I’m up there with social media but I’m not like Rob,” Fennell said with a laugh.

The rules are pretty strict about what they can and can’t do. Fennell was also suspended for Thursday’s game by Hill, also unrelated to posts on social media.

“We aren’t even allowed to retweet anything unless it’s been 24 hours after our game,” Fennell said. “So I might see something that I relate to and I’ll go back and check it out after the deadline. But sometimes I forget about it, to be honest, because there’s so much out there.”

When Beckwith heard that Fennell might not go back to what he saw on a social media post because of the 24-hour rule, he said that’s a good reason for the rule.

“There’s so much out there it’s overwhelming, so we just want our guys to be respectful and to treat social media with care,” Beckwith said. “These guys have aspirations to play after college or they will get jobs and you don’t want to have something on social media trip you up.”

Fennell says as far as he knows there haven’t been many complaints from teammates about the rule.

“In some ways, the rule really helps us,” he said.