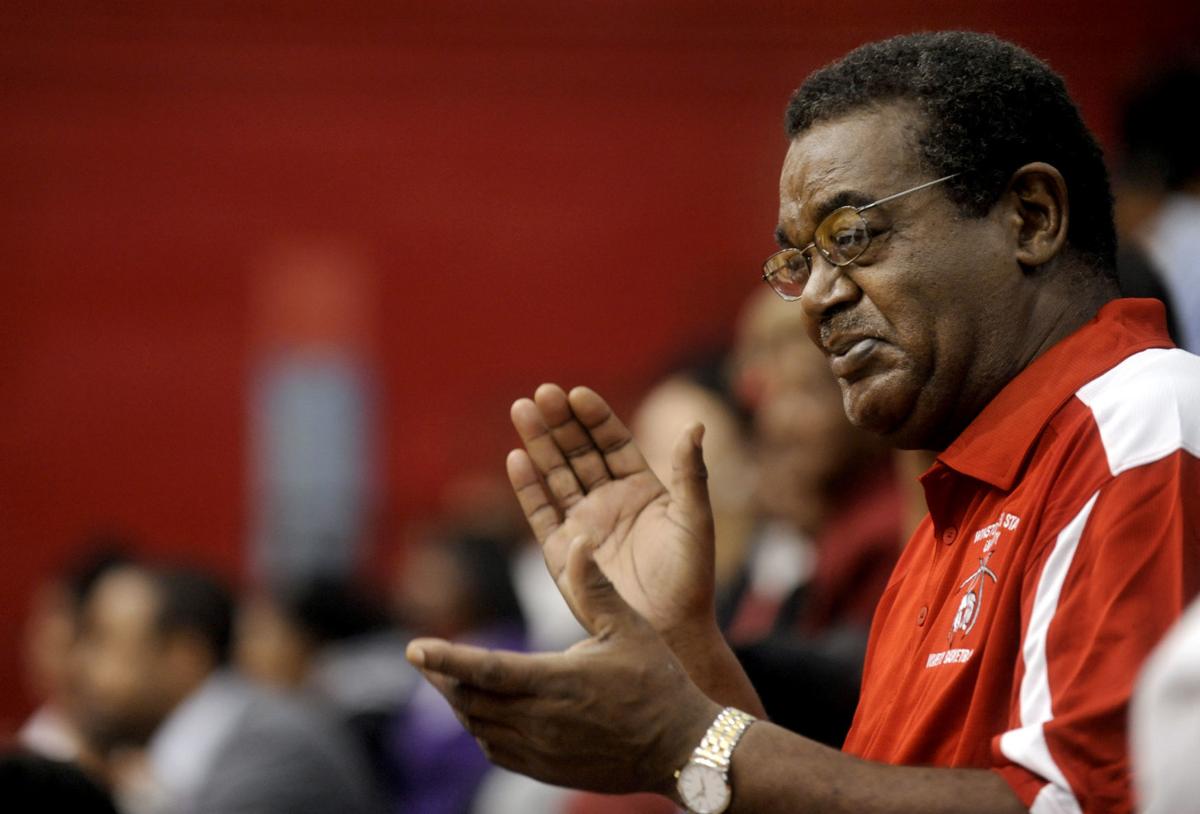 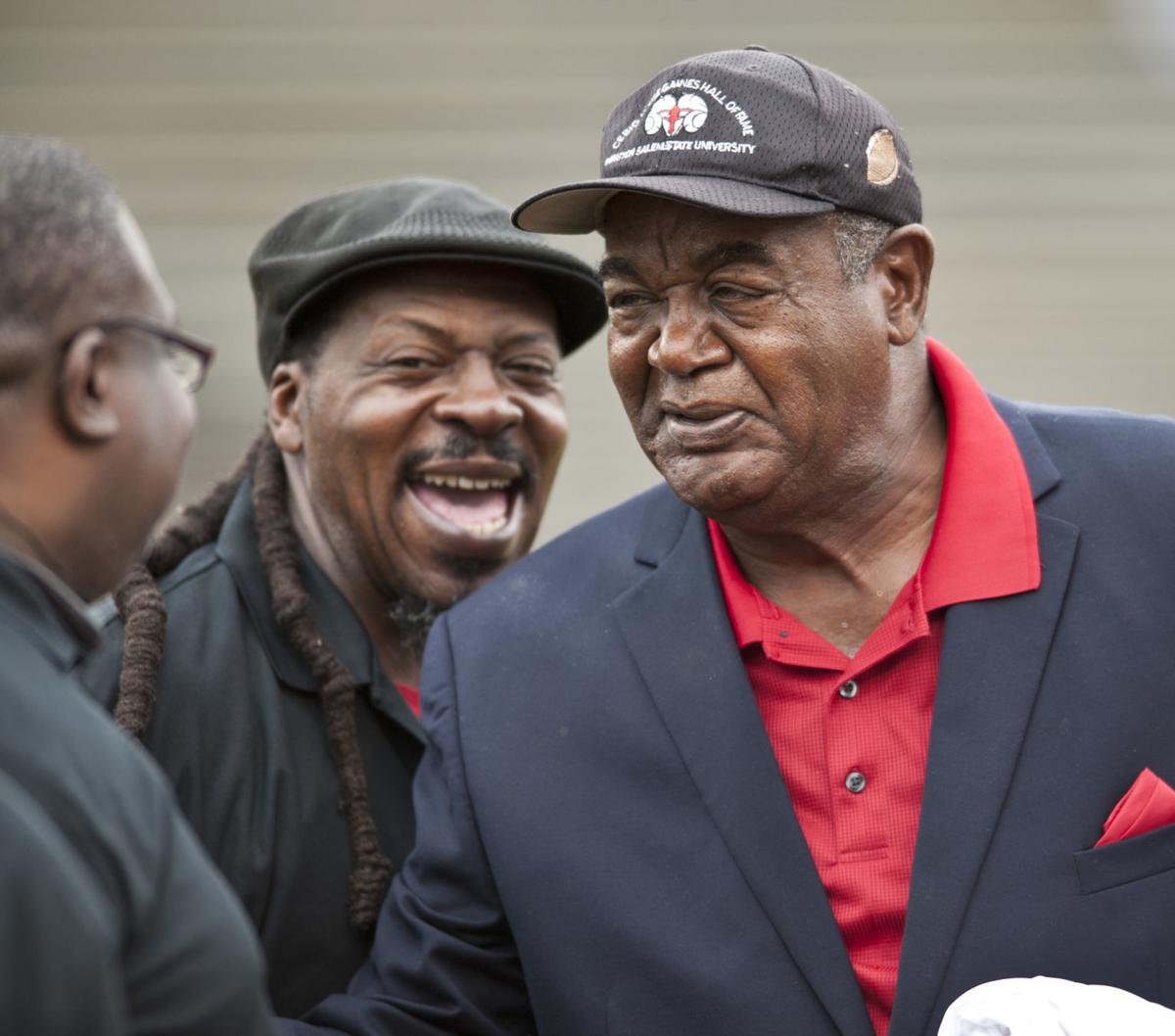 Bill Hayes caught up with members of the 1977 and 1987 football teams that were honored at halftime of the Rams’ game against Johnson C. Smith on Oct. 7, 2017. 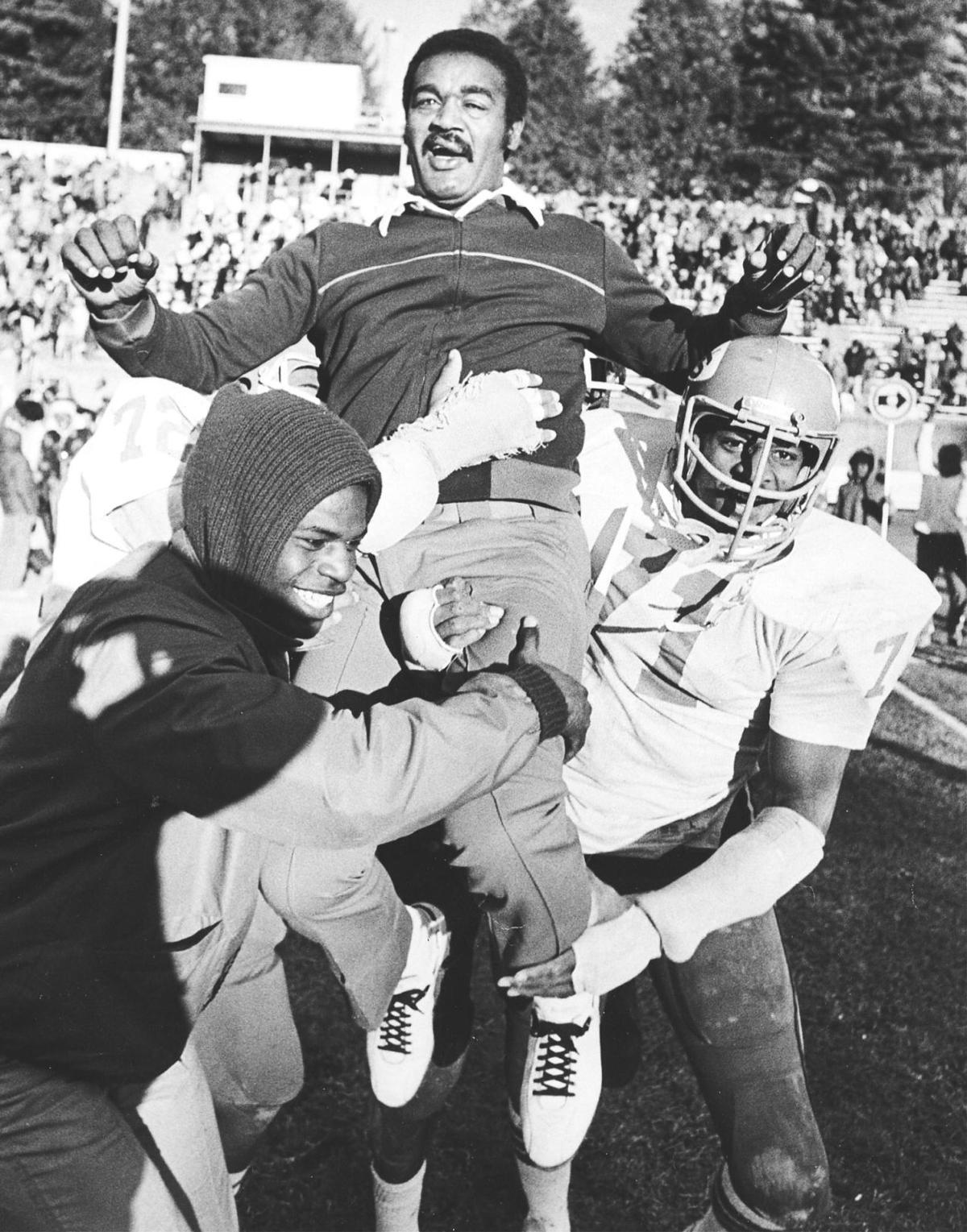 Bill Hayes, during his coaching days at WSSU, was carried off the field by his players in November 1977 after they finished the 1977 regular season 11-0. 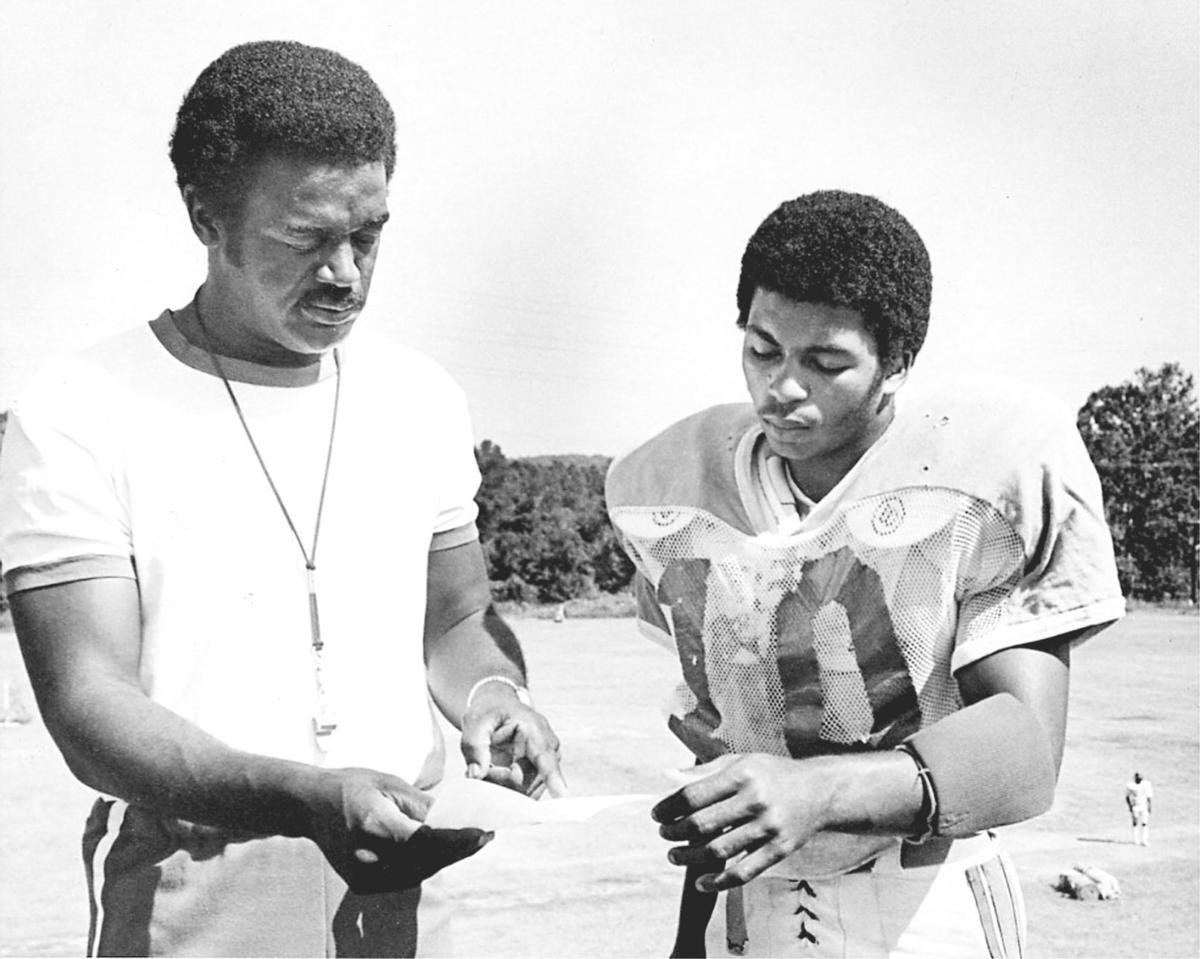 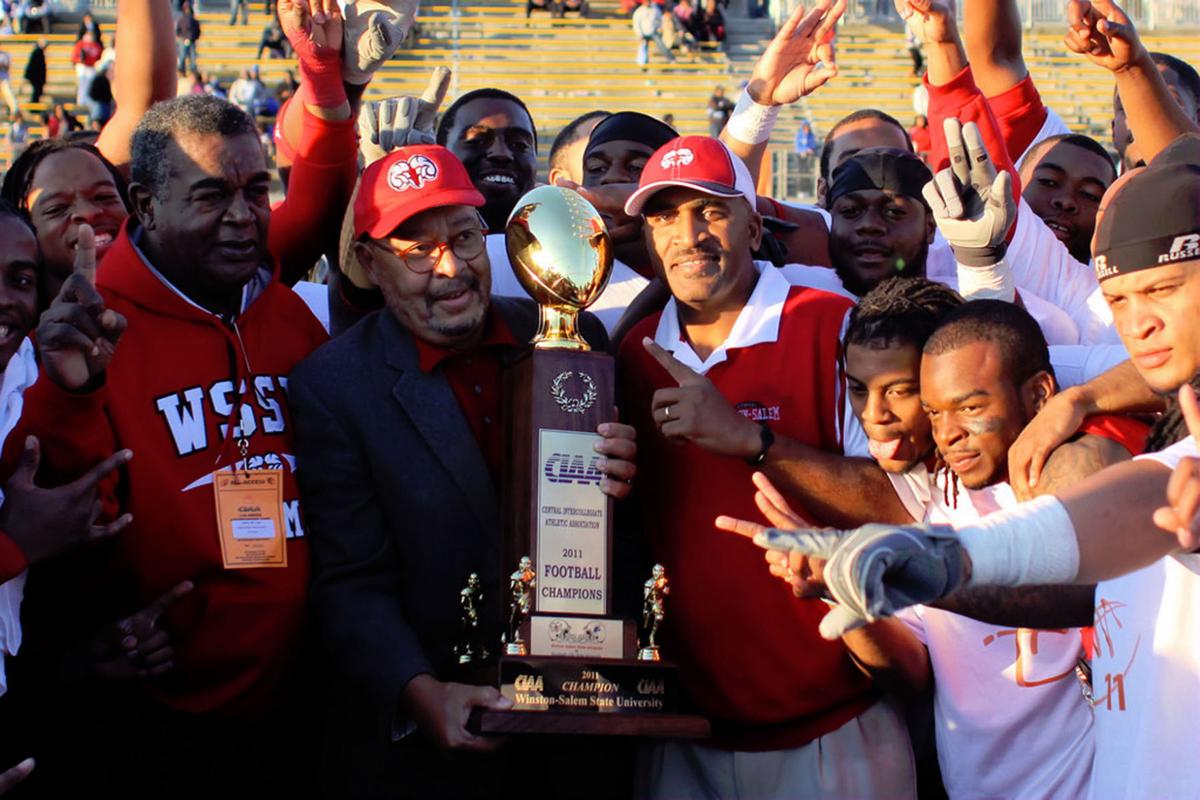 Bill Hayes caught up with members of the 1977 and 1987 football teams that were honored at halftime of the Rams’ game against Johnson C. Smith on Oct. 7, 2017.

Bill Hayes, during his coaching days at WSSU, was carried off the field by his players in November 1977 after they finished the 1977 regular season 11-0.

No thread is woven deeper into the fabric of football as played in Winston-Salem than the story of Bill Hayes.

From the time he showed up to be assistant coach at Paisley High School, to his days as the ACC’s first black assistant coach at Wake Forest, to his unprecedented stints as head coach and director of athletics at Winston-Salem State, Hayes has been a tie that binds folks wishing for gridiron success with those who know how to bring it about.

To attain that success — a success that includes an 89-40-2 coaching record at WSSU, three CIAA championships as a coach and two as director of athletics — Hayes had one secret:

“Never cheat football. Never cheat the sport that you’re playing,” he said. “And I just lived that. I mean I just lived by the fact that I was going to give it all I had.”

Hayes was a success before he arrived in Winston-Salem. Playing in his hometown of Durham, Hayes was a star center and linebacker for N.C. Central, where he caught the eye of a head high school coach from about 75 miles to the west named William Bryant.

When Bryant offered Hayes a position as assistant coach on his staff at Paisley High School, Hayes jumped at the opportunity to pursue what he knew, by then, to be his calling.

“So I always knew I wanted to coach football. There was never anything other that I wanted to do.”

During the unstable times of the mid-to-late 1960s, Winston-Salem was lucky to have Hayes coaching football in the community. Transferred to North Forsyth High School when Paisley closed, Hayes was a calming influence amid the turbulent and, at times, violent uproar of integration in the South.

“When the problems started, I was right in the middle of it because half of my team was black and the other half was white,” Hayes said. “I was the coach for everybody. I mean, I wasn’t the black coach. I was a football coach who happened to be black.

“And so I had great relationships with all the kids, and I think they trusted me and respected me on both sides. So it was easy for me to be a mediator between the two groups.”

He also coached football well enough at North Forsyth to help head coach Colon Nifong guide the team to a state championship in 1971.

Folks started to see a rising star in the coaching profession, and no one in the community had a sharper eye for such than Mary Garber, the trailblazing sportswriter for the Winston-Salem Journal. Garber convinced the right people at Wake Forest — Gene Hooks, the director of athletics, and Chuck Mills, the head football coach — they needed to hire Hayes.

Which is how Hayes became the first black football coach in the ACC.

“And so I moved pretty quickly up the ladder because of my work ethic.”

As it so happened, another person paying attention to what Hayes was doing at Wake Forest and how he was doing it was Garber’s good friend Clarence “Big House” Gaines, the director of athletics at Winston-Salem State. But the wily Gaines took an indirect approach in luring Hayes across town.

Gaines told Hayes he should meet with a committee just to inform the members what they should be looking for in a new head coach.

“Never said he wanted to try to hire me,” Hayes said. “So he conned me. Big House conned me.

“So the lady asked me, she said ‘Why do you want to be the football coach at Winston-Salem State?’ I said, ‘I never said that.’ I said, ‘Big House came and asked me to come over here and talk to you all, and out of respect for him, that’s why I came.’

“Can you believe that? That actually happened.”

The undertaking Hayes found across town was massive.

“I mean it was just a massive encounter. I mean huge.”

Sensing his window of opportunity was closing, Hayes, in 1988, accepted the position as head coach at North Carolina A&T, a Division I program. He had enough success to win the three MEAC titles, fielding his best team in 1999, the season the Aggies went 11-2 and won the Sheridan Broadcasting Network Black College National Championship.

But eventually the urge to return to Winston-Salem, and all he had left behind, became too great. He returned to Winston-Salem as director of athletics in 2010, just in time to help the school through another difficult period.

“I mean it hit perfect, because he is as brash and as innovative and aggressive and good-looking. I called him a Pied Piper. So we needed a Pied Piper. You know the Pied Piper with his flute led the people right over that cliff, boom. And Connell had the charisma to blow his flute and people would follow him right over a cliff.”

Hayes had threatened to retire before President Dr. Donald Reaves of Winston-Salem State was able to lure him back from Florida A&T. But it wasn’t until 2014 that Hayes finally made good on that threat and called it a career.

A member of the CIAA Hall of Fame, as well as the Halls of Fame at N.C. Central, Winston-Salem State and North Carolina A&T, Hayes, at age 75 is enjoying his retirement. He plays golf, raises money for the Bill Hayes Foundation and has become more active in the Galilee Missionary Baptist Church.

“They’ve even got me going to church at 12 o’clock on Wednesday,” Hayes exclaimed. “Can you believe that?”