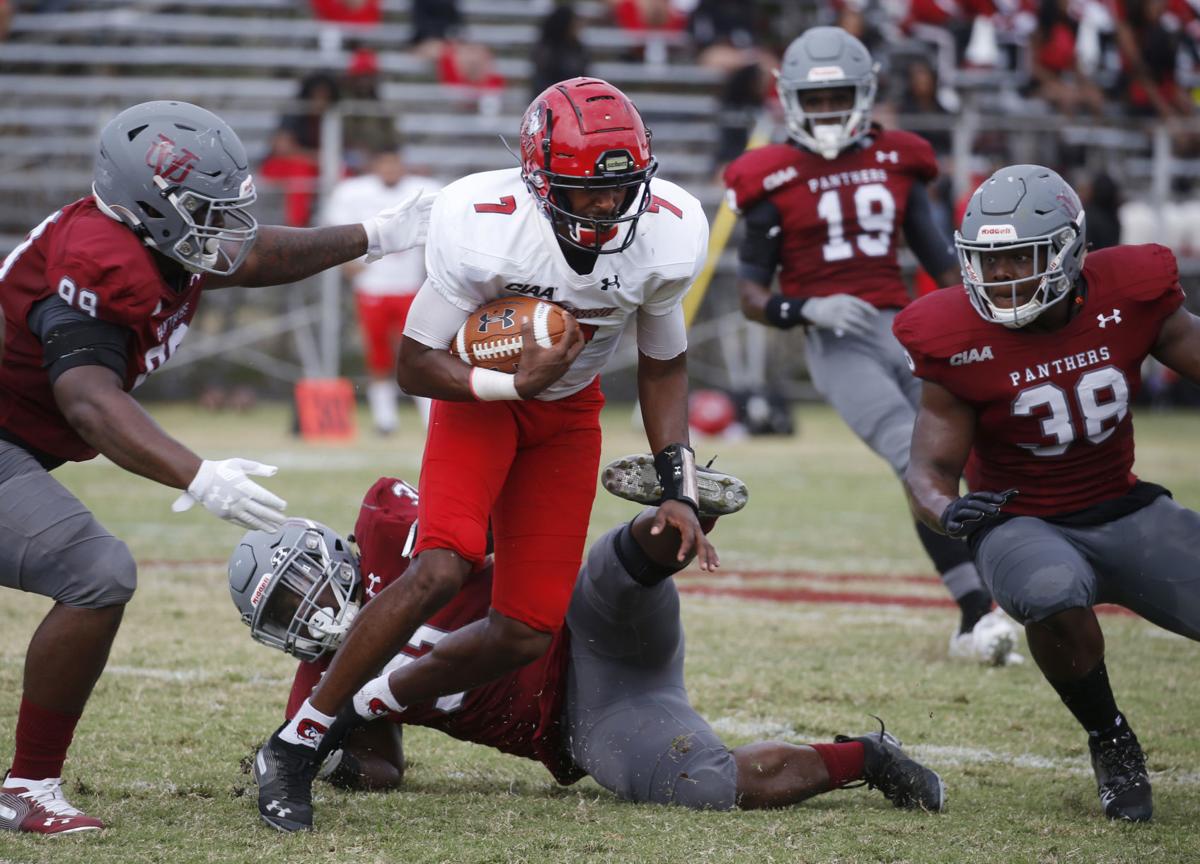 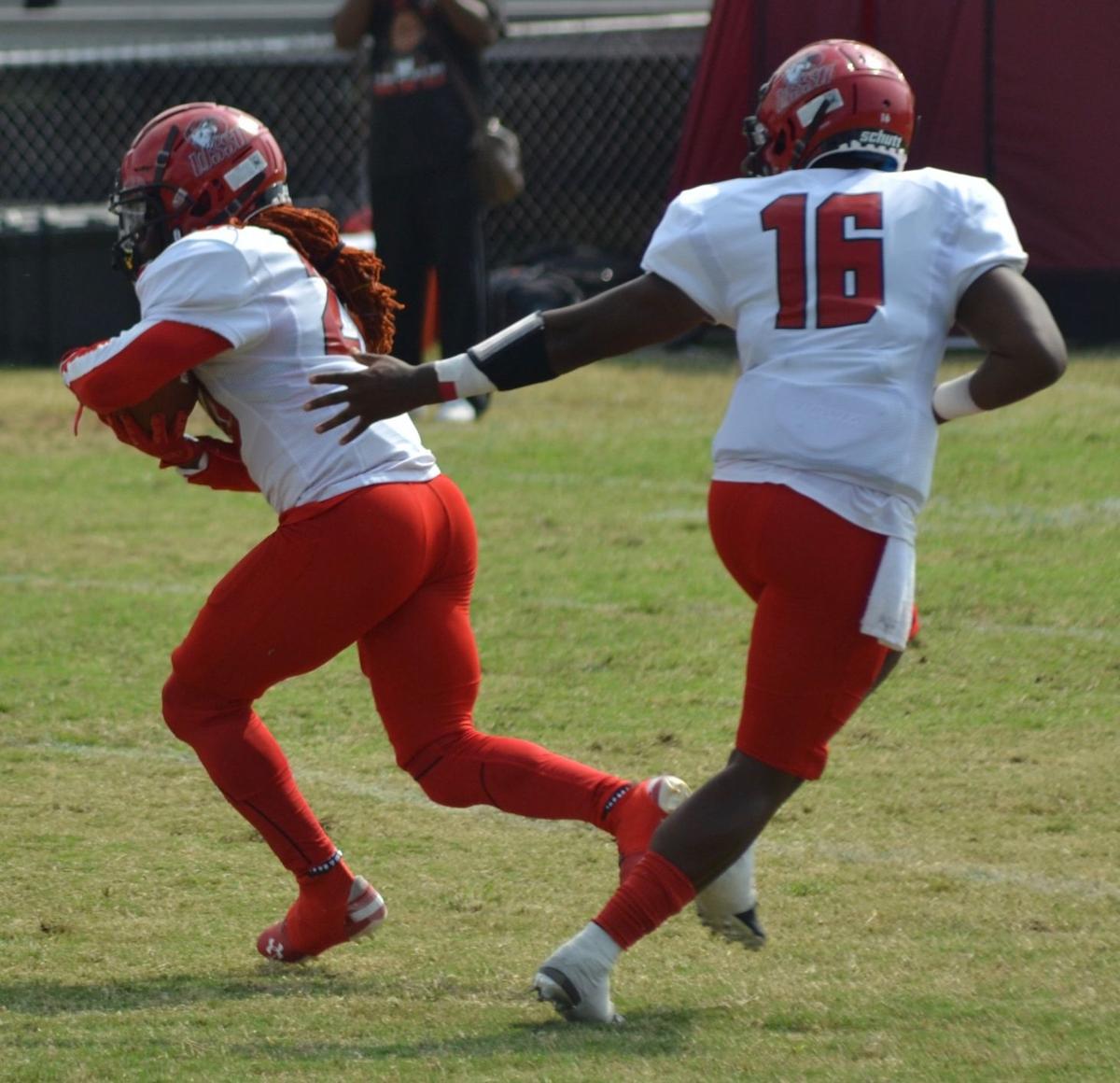 Quarterback Naill Ramadan of WSSU hands off to running back Quarderman Sloan in the first half. Sloane had 15 carries for 100 yards for the Rams. 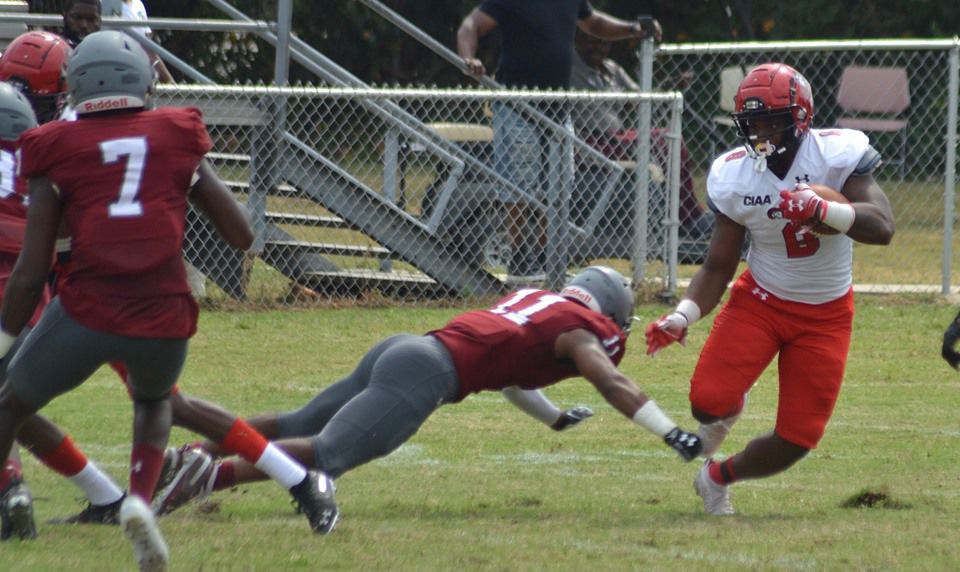 Rams safety Daryus Skinner had an interception, his third of the season.

Quarterback Naill Ramadan of WSSU hands off to running back Quarderman Sloan in the first half. Sloane had 15 carries for 100 yards for the Rams.

Rams safety Daryus Skinner had an interception, his third of the season.

RICHMOND, Va. – Special teams doesn’t always play a role in the outcome of a football game, but it did on Saturday afternoon at Hovey Field as Virginia Union came from behind to beat Winston-Salem State 16-15 in front of just over 7,000 fans.

It was the conference opener for both teams, and a blocked punt by Erwin Faison, a backup quarterback, proved to be the biggest play of the game late in the fourth quarter. The Rams were clinging to a 15-13 lead after Jefferson Souza of the Panthers missed a 29-yard field-goal attempt with three minutes to go.

That momentum that the Rams had after the missed field goal didn’t last long. The Rams (1-3) stalled on offense and were forced to punt. Dominique Graves, who is also the Rams’ quarterback, got a good snap on the punt attempt but Faison got through the three-man wedge and snuffed the punt out.

A few plays later it was Souza who redeemed himself by nailing 25-yard field goal with 21 seconds left to give the Panthers (3-1) the one-point lead.

“We just didn’t get bodies on bodies,” Graves said about the blocked punt, which was the first one of the season. “We called for the protection because they knew they were coming after us, but we just didn’t have enough bodies where we needed them. It was a good snap but I couldn’t get it off on time.”

Robert Massey, the interim head coach of the Rams, said he reminded his punt unit that the Panthers were going to come after it.

“They just came up the middle and got through the shield,” said Massey, who is also the special teams coach.

Another big special teams play was turned in by running back Tabyus Taylor of the Panthers, who also was on the return team for kickoffs. After the Rams scored on a Farrell Murchison 1-yard run on a fourth-and-goal from the Jumbo formation they led 15-10 after the two-point conversion was no good.

The Rams had missed an extra-point attempt in the first half when Pavel Buenaventura couldn’t convert. Buenaventura did make a 23-yard field goal in the second quarter.

On the kickoff after Murchison’s touchdown, Taylor, who was held to 76 yards on 22 carries, went 59 yards to set up the Panthers deep in the Rams’ territory. The Rams’ defense held the Panthers to a field goal as Souza’s chip shot cut the lead to 15-13.

As it turned out that play from Taylor on the kickoff return was big.

“We didn’t do bad (against Taylor) but that special teams play (on the kickoff return) hurt us,” Massey said.

The Rams have had the lead at halftime in all four of their games this season but have only closed the deal one time, which was last week against Tuskegee.

Massey took offense to some of the extra-curricular tactics of the Panthers. Graves said he suffered an injury in the first half after he was grabbed in the crotch area while underneath a pile.

“We have to finish,” Massey said as he tried to sum up losing another close game. “We have to handle adversity a little better. There were some penalties and our guys got gassed a few times at the bottom of the pile. That’s why Dom had to come out at one point because they were grabbing him and Murch (Ferrell Murchison) had to come out because of the same thing. We warned the officials but nothing happened, but (Virginia Union) played hard and kept coming at us.”

Because of Graves’ hobbling most of the game, offensive coordinator Lawrence Kershaw had to turn to backup Naill Ramadan, a graduate transfer from N.C. Central. Ramadan threw a 5-yard touchdown pass to Cameron Belk for a 9-0 in the second quarter but Buenaventura missed the point-after attempt.

Quarterback Khalid Morris hit Jaiden Reavis with an 11-yard touchdown pass just before the half to cut the Rams’ lead to 9-7.

To start the second half the Panthers went on a 16-play drive that ended with Sousa’s 25-yard field goal to give the Panthers a 10-9 lead. But the Rams put together their best drive of the game and took the 15-10 lead early in the fourth quarter on Murchison's score.

Running back Quaderman Sloane, who had his best game of the season with 100 yards on 15 carries and he caught three passes for 47 yards, said the blocked punt was a killer.

“Stuff like that just demoralizes you and that blocked punt kind of did that to us,” Sloane said. “Everything just kind of drained out of us on that block. And (Sousa) missed that first field goal, he wasn’t going to miss again and its unfortunate he got another chance like that.”

As the Panthers met at midfield with Coach Alvin Parker after the game Sousa had a big smile on his face.

“I had to redeem myself after the miss,” said Souza, who is one of the best place-kickers in the CIAA. “When we blocked that punt I had new life. So I didn’t want to be in that position again so I made it this time.”

Graves, was 12 of 18 passing for 145 yards and was sacked twice, didn’t want to place all the blame on shoddy special teams play.

“We don’t want to just blame it on special teams because offensively we could have done much better,” Graves said. “We had too many three and outs that put our defense back on the field, especially in the second half.”

Ramadan, who was 4 of 8 passing for 37 yards, was in the game for the final 21 seconds but failed to move the ball as the Panthers closed it out. It was the third time in the last four seasons that the Panthers have won.

One of Massey’s messages to his team after the game was about what’s ahead. As the Panthers and Rams shook hands several of the Panthers mentioned that they could see the Rams again if they each win their division. If that happens, they would meet again in the CIAA championship game in November in Salem, Va.

“The other side of this is we haven’t lost anything on our side of the division so we still got a chance,” Massey said as the Rams will face defending league champions Bowie State on Saturday at Bowman Gray Stadium at 2 p.m. “I’m hoping that’s the case, but this is tough. We will take this ride home and lick our wounds and get back to practice.”

The Massey-Interim "coach" experiment is FAILING! Elwood, better apologize, beg, and plead for Kienus Boulware to return to his rightful position.