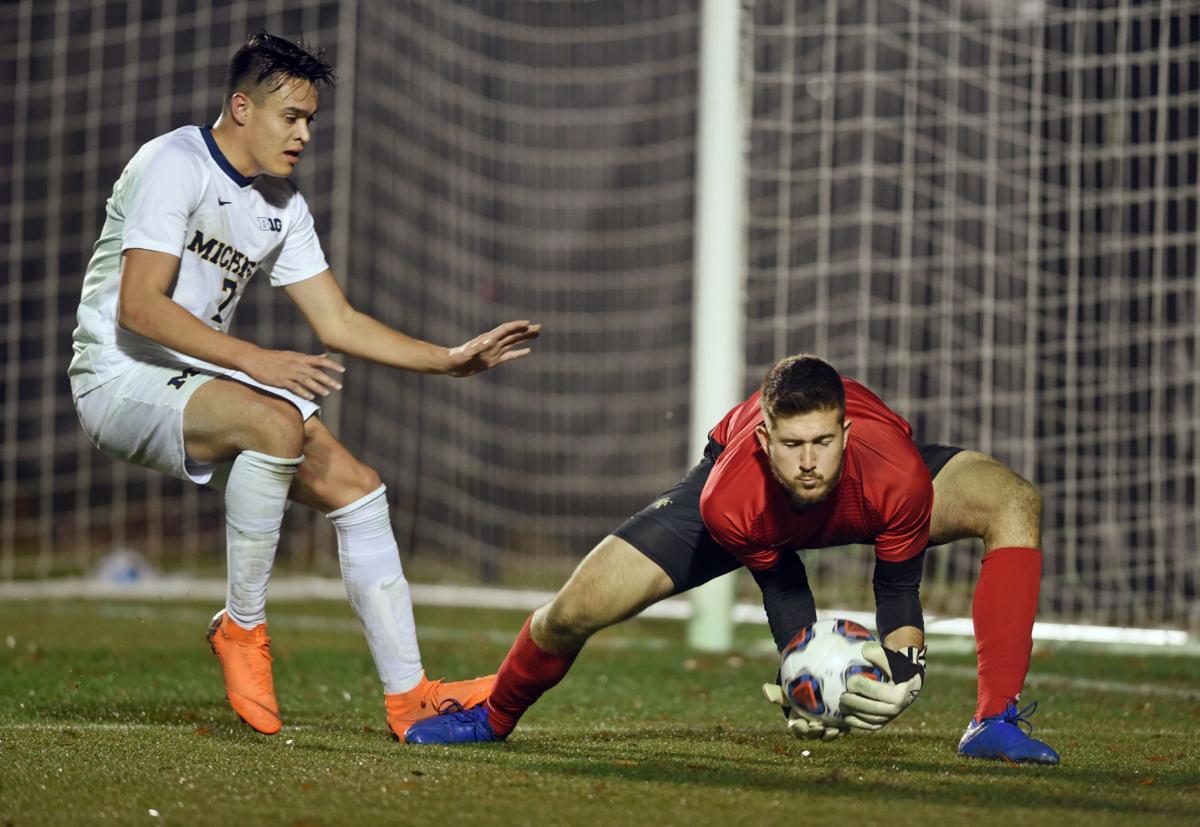 Goalie Andrew Pannenberg of Wake Forest has given up one goal in three NCAA Tournament games. 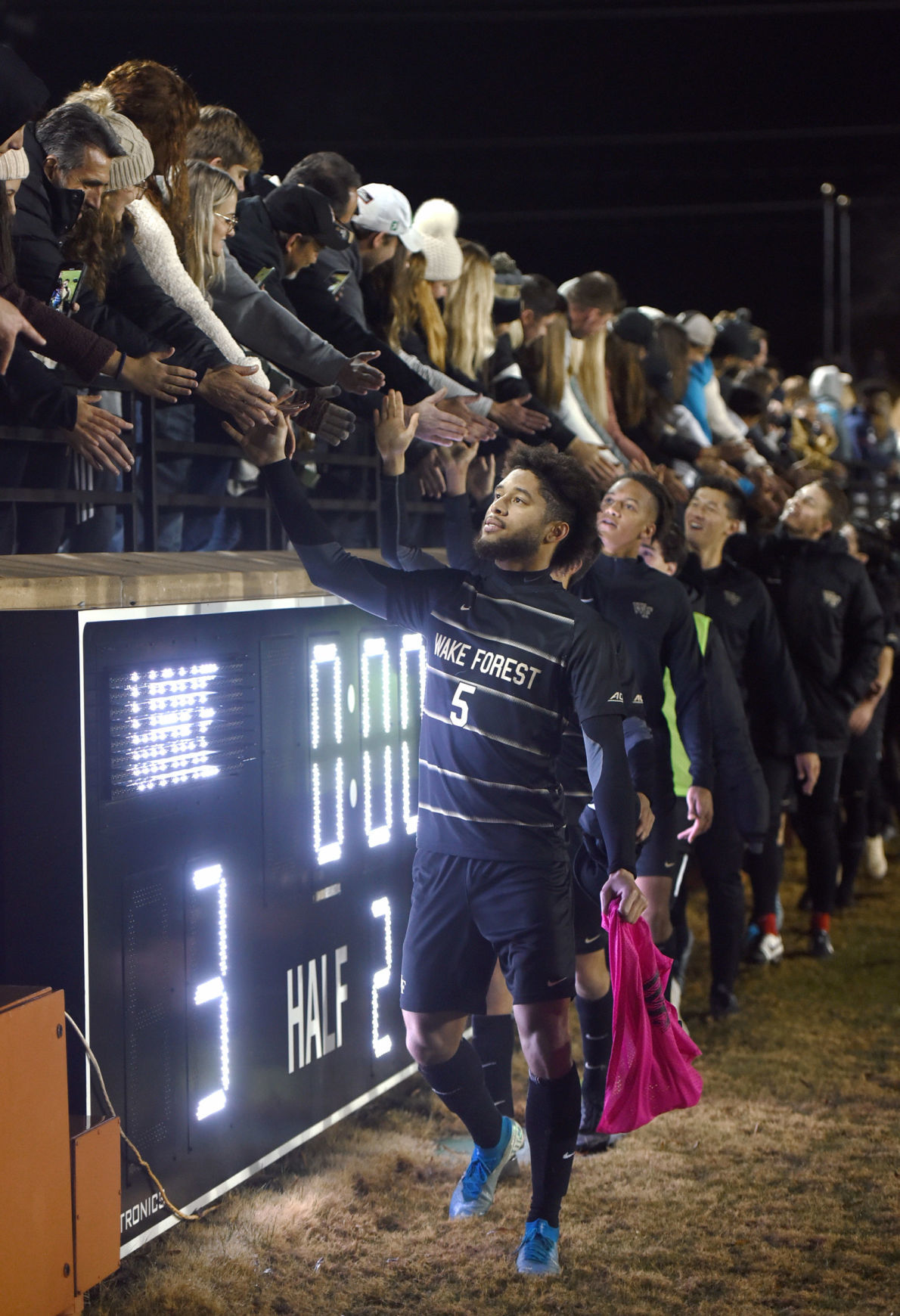 Michael DeShields (front) and the Wake Forest defense has been on a roll during the NCAA Tournament.

Goalie Andrew Pannenberg of Wake Forest has given up one goal in three NCAA Tournament games.

Michael DeShields (front) and the Wake Forest defense has been on a roll during the NCAA Tournament.

Coach Bobby Muuss of the Wake Forest men’s soccer team would travel anywhere to play in the College Cup, soccer’s version of the Final Four.

That the College Cup is in Cary at WakeMed Soccer Park makes it convenient for the red-hot Deacons. The fourth-seeded Deacons will take on top-seeded Virginia about 8:45 p.m. Friday in the second semifinal.

“I’d be excited if it was in Denmark,” Muuss said about guiding the Deacons to the College Cup for the second time in his five seasons. “Being in Cary ... that’s great because Wake won it there before, but that’s where Virginia won it in 2009, so Cary’s been good to them as well.”

The Deacons, who won the championship in 2007, also made it to the College Cup in Cary in 2009 but lost to the Cavaliers.

The two will square off again after playing each other in an ACC semifinal Nov. 13 in Charlottesville. The Cavaliers won 1-0, but since then the Deacons have won three straight in the NCAA Tournament.

“It’s a great opportunity for the guys to continue the season,” said Muuss, whose teams have won 89 games in five seasons, the most of any coach in the country. “They are working together and playing off each other quite well. And they are doing it at the right time.”

In 2016 the Deacons made it to the College Cup in Houston, where they beat Denver in the semifinals but lost to Stanford in the championship match on penalty kicks. The only player still on the roster who saw action in that game was Bruno Lapa, who was a freshman who took a penalty kick.

“We have a completely different team,” Muuss said about guiding the Deacons to their sixth overall appearance in the College Cup. “It’s the pinnacle of college soccer and you want to be on that stage. We’re just lucky to be playing in it.”

The Deacons are more than just lucky, they’ve been up to the task in wins over Maryland, Michigan and UC Santa Barbara in the NCAA Tournament. This might not be the most talented team in Muuss’ five seasons at Wake Forest, but it plays together well, and defensively has been outstanding in the postseason.

Goalie Andrew Pannenberg has allowed just one goal in the three tournament games and lead defender, Michael DeShields, has also been outstanding.

“We are at a point where we are very happy with making the College Cup,” said DeShields, a redshirt junior who says he will be back next season. “There are only four teams left playing but we are not finished. Nobody is content with where we are so we have to keep pushing.”

DeShields redshirted the season the Deacons made it to the championship game in 2016. He says a key in NCAA Tournament play is about defense.

“We are hitting a good stride right now on defense,” DeShields said. “We leaked a goal in and that’s been it in the tournament. We’ve moved past it and that’s what championship teams do.”

In the game against the Cavaliers the Deacons had a letdown in the first half and trailed 1-0 at the break. While they played better in the second half couldn’t break through to tie it up.

“It was a tough game for us because we couldn’t figure out their press like we should have,” DeShields said. “We did well to respond in the second half but we were down 1-0 and they are a real, solid team because it’s tough to score on them.”

Muuss says being able to handle the pressure of the Cavaliers will be a key. Not only are the Cavaliers the top seed in the tournament they are ranked No. 1 in the coaches’ poll.

“I think handling their press and the down pressure that they apply,” Muuss said. “We’ve tried replicate what they do in practice but they are very good. They stretch you vertically and horizontally and we are going to have to do a good job of taking away lanes and travelling with the ball up the field.”

The Cavaliers (20-1-1) beat SMU 3-2 in overtime to advance to the College Cup as Joe Bell scored on a rebound of his own penalty kick.

Coach George Glenovatch also led the Cavaliers to a national championship in 2014.

“To win a national championship you are going to have to beat the best teams in the country and Virginia has been the most consistent and the best team most of the year,” Muuss said. “We look at this as an incredible opportunity.”

Mike DeShields of Wake Forest talks about the College Cup

When: Today and Sunday.