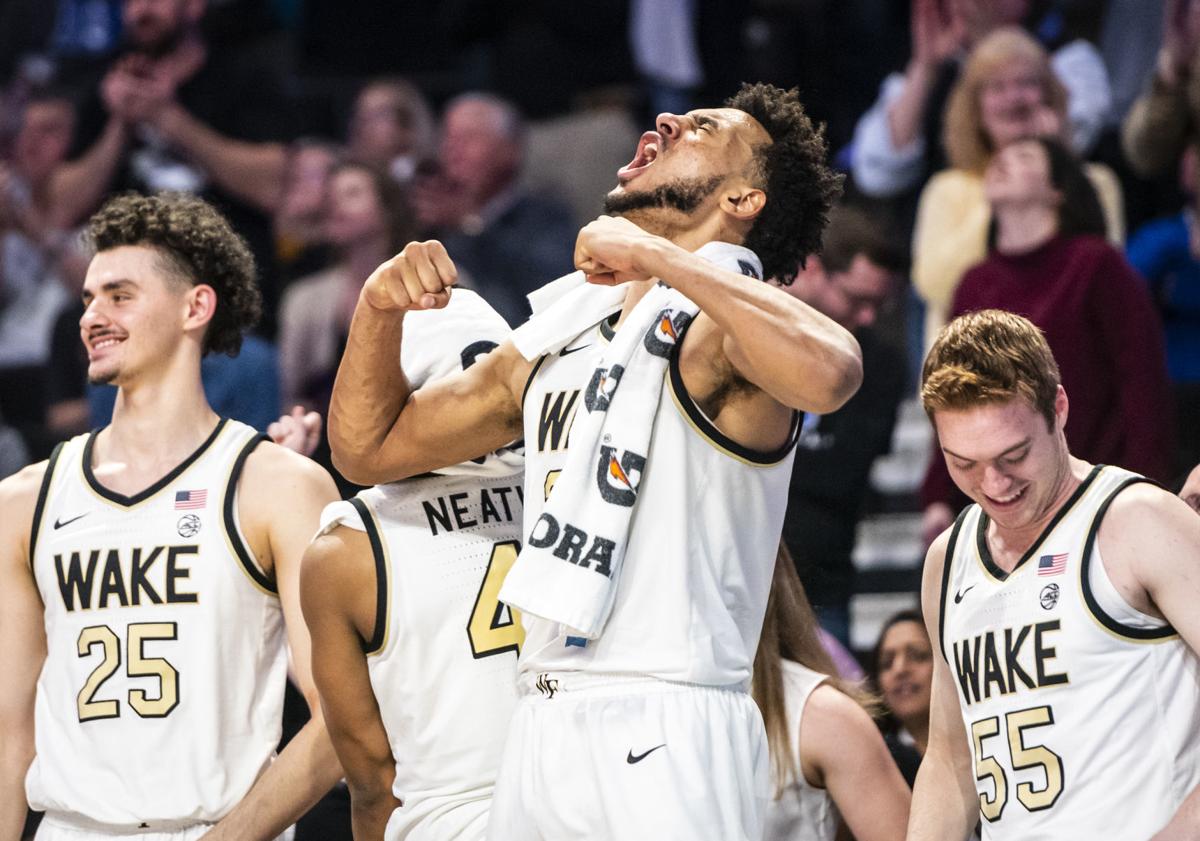 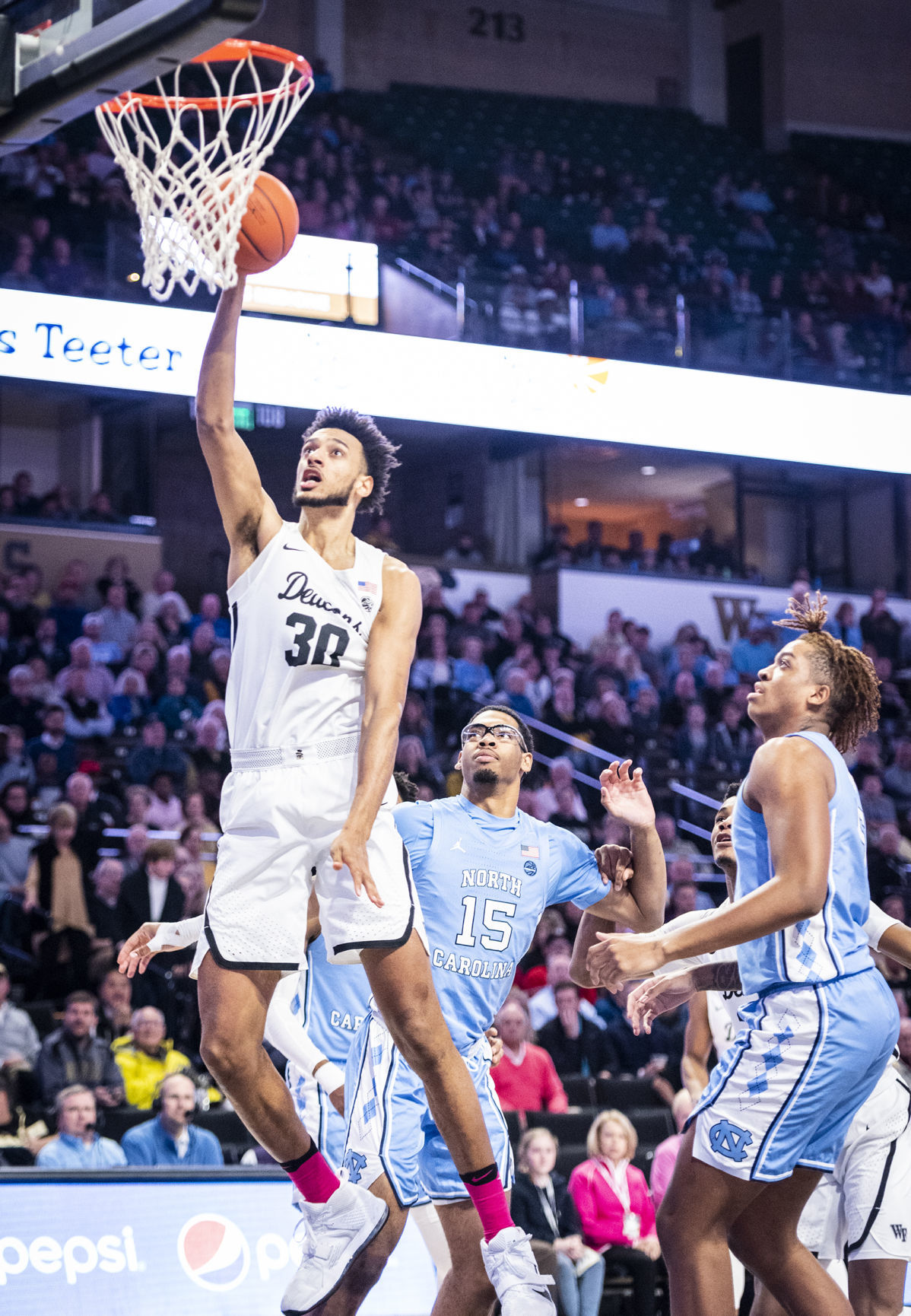 Wake Forest’s junior center has emerged as a force this season, becoming at times a dominant interior presence. Sarr’s 30-point, 17-rebound performance against Notre Dame was the third 30-15 game for a Deacon in the last 50 years — the others were notched by Rodney Rogers and John Collins.

“When you’ve got somebody on your team like Olivier Sarr, who starts off the game basically scoring the first 12 points, it’s not even debatable who’s the best player on the floor,” senior point guard Brandon Childress said after Sarr’s game against the Irish.

Sarr was named to the All-ACC third team on Monday, the first Wake Forest player to land on one of the three teams since Collins was on the first team in 2017.

Sarr, a junior from Toulouse, France, is averaging 13.5 points and 8.9 rebounds as the Deacons head into the ACC Tournament. He was one vote behind Garrison Brooks of North Carolina for the ACC’s most-improved player award, having increased his scoring average by 7.3 points and rebounds by 4.4.

“These are my first years playing full basketball, really, since I was real young,” Sarr said. “I hit that growth spurt, so I couldn’t play.”

The development of Sarr only came about only after growing pains — first literal and then developmental.

“Olivier was a wing. And he goes through a growth spurt where he’s not able to play for some time because his body is aching and he’s just not able to do it, and he comes back and he’s damn near 7-foot,” Coach Danny Manning said. “He goes from a wing to a 7-footer without really being out on the court at times to handle that adjustment.”

Sarr said his growth spurt came when he was between 15 and 17 years old. He played more soccer than basketball until he was 14, he said, and then wanted to focus on basketball.

The problem, as it turns out, was that he started growing shortly after picking basketball.

Sarr had literal growing pains that prevented his development as a basketball player. His knees ached. His heels hurt.

Not to get too dramatic here, but Sarr couldn’t work on post moves and develop into an interior player until arriving at Wake Forest — and even that was delayed — because that was when the pain stopped.

“Knee pain, heel pain, Achilles, all of that,” Sarr said of what ailed him.

And when he felt good enough to play?

“I was playing the wing, shooting 3s all the time.”

Sarr came to Wake Forest late because he was playing for the under-18 French national team in the summer of 2017. He averaged 7.6 points and 5.4 rebounds per game at the FIBA U-18 European Championships.

“I was really tall and they put me at the five a little bit,” Sarr said. “It was a tough transition, and then once I came here, it was like started playing the four, then the five. And then getting my body right, and then everything is clicking.”

Sarr was listed at 215 pounds for his freshman season. Associate head coach Randolph Childress laughed Monday when reminded of that.

There’s a subtle head tilt for Sarr and definitive “no” when he’s reminded of that listing.

Sarr, understandably, got banged around a bunch in that freshman season. He also did what he knew how to do in his limited basketball experience — more than 25% of his field goal attempts were from behind the 3-point line.

That clip drops to 14% — 16 of 114 — in his sophomore season. Sarr put on about 45 pounds in the summer between his freshman and sophomore years — call it the Chipotle affect — but still was unable to fully make it through the offseason program without some discomfort.

Sarr averaged 6.2 points and 5.5 rebounds per game as a sophomore and seemed to be hitting his stride with a career-high 14 points in a win at Notre Dame.

But an ankle injury during practice turned out to be season-ending.

Sarr’s first two games of this season were his worst two — 11 points and eight rebounds in 38 minutes combined. Since then, he’s had 10 double-doubles, been ACC player of the week twice and earned third-team All-ACC honors.

And perhaps the most-telling stat for his evolution is that of his 242 field goal attempts, seven have been 3-pointers.

“I mean, if you look in the NBA … there’s no guys that are 7-feet, just playing the wing, just shooting 3s,” Sarr said. “Even Kevin Durant, he’s got a post-up game. For me, it’s just being able to have a complete package.”

Sarr is a load on the interior at 255 pounds. He’s got the moves to complement his size, now, with a vast array of driving hook shots and — as was showcased in the double overtime win over Duke — an off hand that’s potent, if needed.

“I think now he’s doing that at a much more efficient type of footwork than in the past,” Manning said. “In the past, it was always a looping — if I’m going to go past you, I’m going to go around. Now it’s more straight-line drives.”

Sarr’s path to becoming the presence that he’s emerged as this season has been anything but a straight one.

But now he’s heading in the right direction.