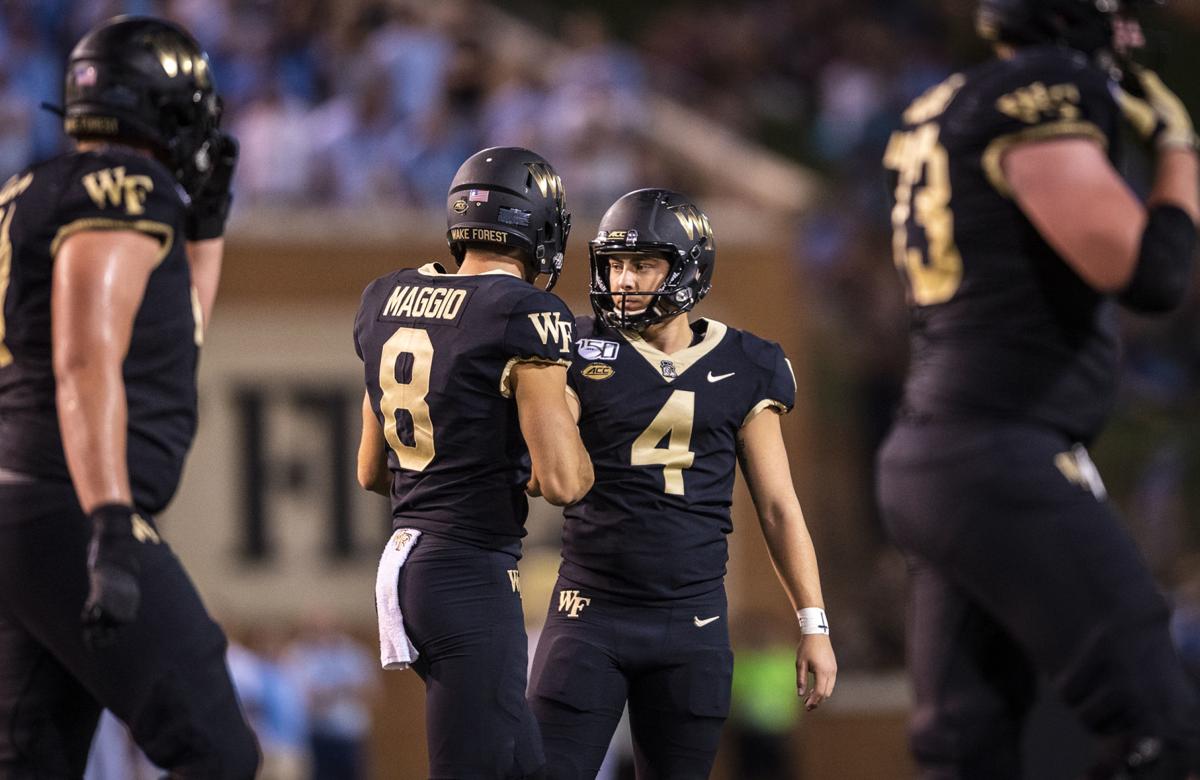 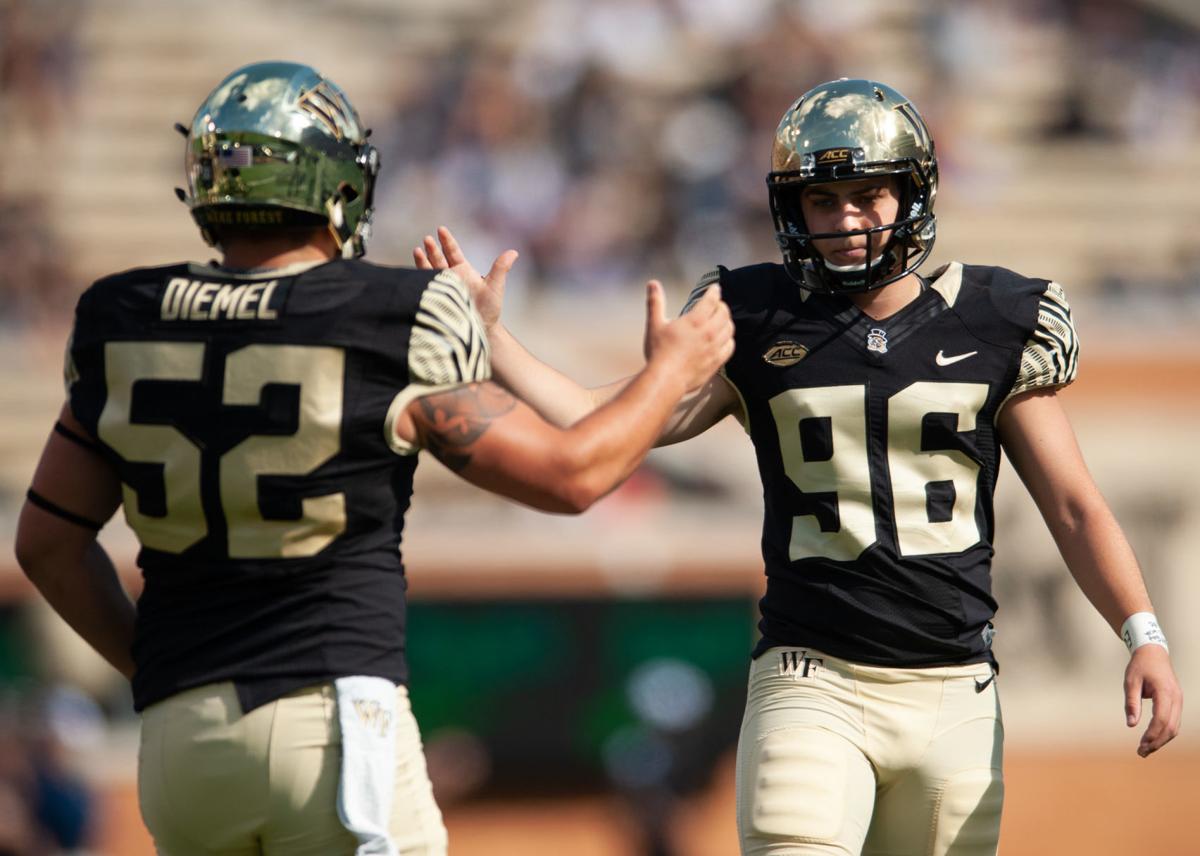 A little more than a year later, everybody involved can now laugh about a viral moment that put Wake Forest’s football team into a national view.

Dom Maggio wasn’t laughing when he was looking for Nick Sciba in the first quarter of last season’s game against Notre Dame, and Coach Dave Clawson certainly wasn’t smiling about it that day.

The holder who didn’t have a kicker to hold for — and all others involved — now find the humor in that internet-famous moment.

“I saw the John Travolta memes and all of that from Pulp Fiction. It was bad. I was all over the place too,” Maggio said. “But it was a panicked moment. We needed to get him out there. He was eating a hot dog on the sideline.”

Exactly. After enduring embarrassment on a national level, Sciba’s freshman season saw him make 19 of 22 field-goal attempts, including the last 11. He’s 4-for-4 this season — his streak of 15 straight is the longest current streak in the nation.

Humming along now, Sciba reflects on his moment against Notre Dame as a humbling one.

“It’s a laughable subject now. Me and Clawson laugh about it sometimes,” Sciba said. “Everybody on the team, every once in a while, gets a good laugh about it. I actually hit two, missed two that day.

Turning the page on that moment is only part of a larger theme here with Wake Forest’s specialists.

There’s a unique kinship that comes with being a member of Wake Forest’s cadre of specialists. In a typical two-hour practice with 18 segments, the specialists might be needed for the first period for field goals and extra points, Maggio and others might punt in one or two segments, and long snapper Dayton Diemel might take on snapping duties for seven-on-seven situations.

Otherwise, for the other roughly 90 minutes, the specialists are separated from the team — left to their own devices to perfect their crafts.

“You have all these things in football you’ve gotta do, whether it’s ball-security drills, blocking, tackling — for the most part, every other football player has to do a lot of those things,” Clawson said. “The specialists, there’s this one thing they’ve gotta do and they’ve gotta do it really well.

It’s important to Clawson, who meets with the group after every practice, for people outside of the program know that these aren’t specialists who play football — they’re football players who happen to have a particular set of skills.

And if you missed that reference, talking about a movie like “Taken” is something Clawson and the specialists might find themselves doing in one of those post-practice conversations. Special teams coordinator Wayne Lineberg is also the tight ends coach, so that’s the group he meets with after practice.

“This has very much been a marriage of convenience,” Clawson said. “I had nobody to meet with, they had nobody to meet with, specialists come see me. And we talk about everything from whatever show they’re streaming to what homework they’ve gotta get done that day or who they had dinner with this weekend or what restaurant they went to or how they’re going to solve the global warming crisis in the next five years.

“All of those things have come up, everything is free game.”

Chemistry is accelerated with Diemel handling both punt and field goal/PAT snaps, as he has since halfway through the 2016 season. Maggio has been the team’s punter in every game since the start of that season, and is the holder. It also helps to have a player like Zach Murphy, who owns backup roles for every position: place-kicker, kickoffs, punter and holder.

It’s a loose bunch — loose enough to joke about Sciba winding up in what could have been a devastatingly embarrassing moment last year.

“Nick, he is the most chill person you’ll ever meet with that stuff. You say something to him, he’ll laugh about it and he’ll give you something back,” Diemel said.

“He’s the type of guy that (would say), ‘Oh look, they tweeted about me.’ And he takes what he does very seriously, too,” Maggio said of Sciba. “He’s got that mental edge like us specialists have to have. A bit of levity to things, but then you take what you do seriously and you don’t get too high or too low and he’s done a great job of staying level-headed.”

And staying on the field so that Maggio doesn’t have to scour the sidelines for him.

“He didn’t help me at all, did he?” Sciba said with a laugh of Maggio’s part in last season’s moment. “That’s what all my friends from back home were telling me, ‘You know, your holder didn’t give you any help, he looked like a goofball holding his hands out like that.’

“But I can’t blame him, I probably would’ve done the same thing, ‘Where’s the kicker?’ you know? But yeah, we all just laugh about it now.”

It’s Wake Forest’s ACC opener without it being the first ACC team that the Deacons have faced this season — if that makes sense.