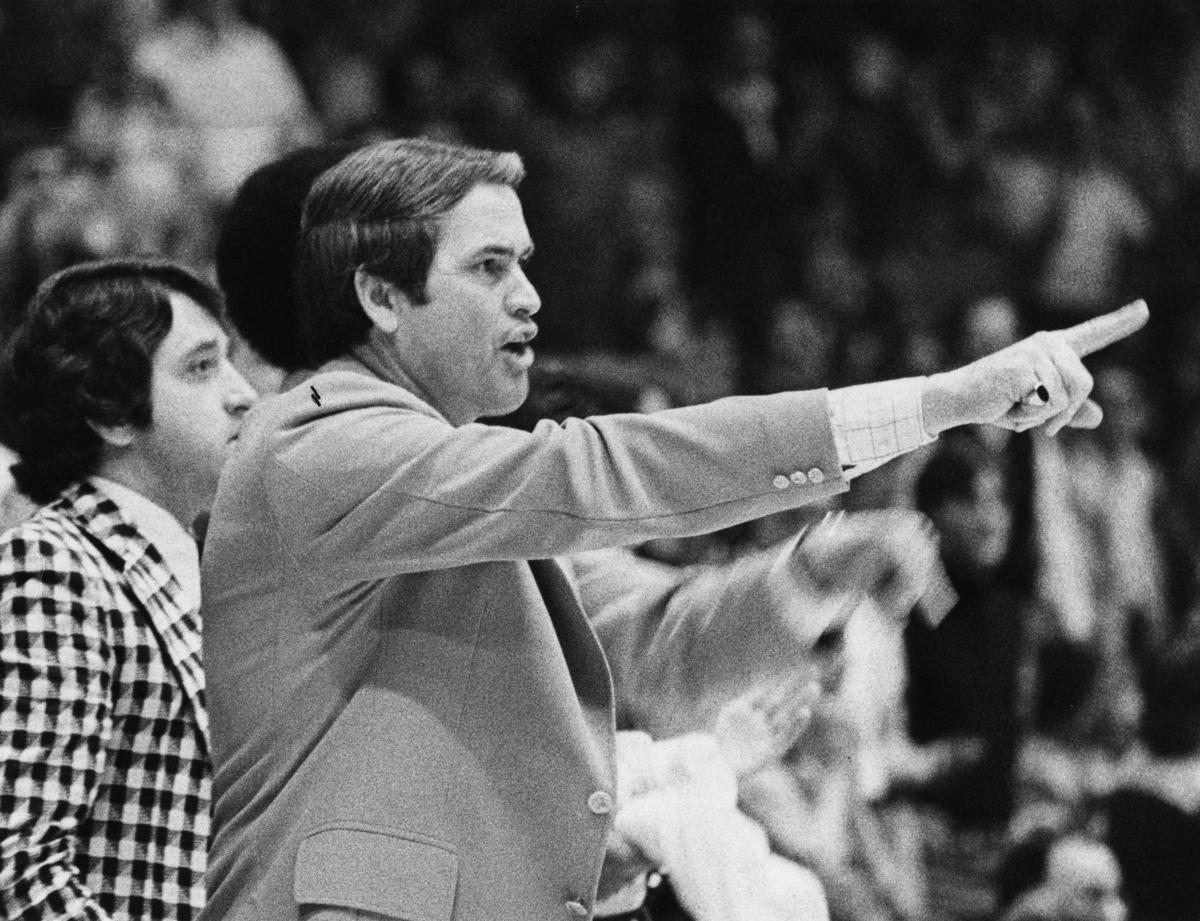 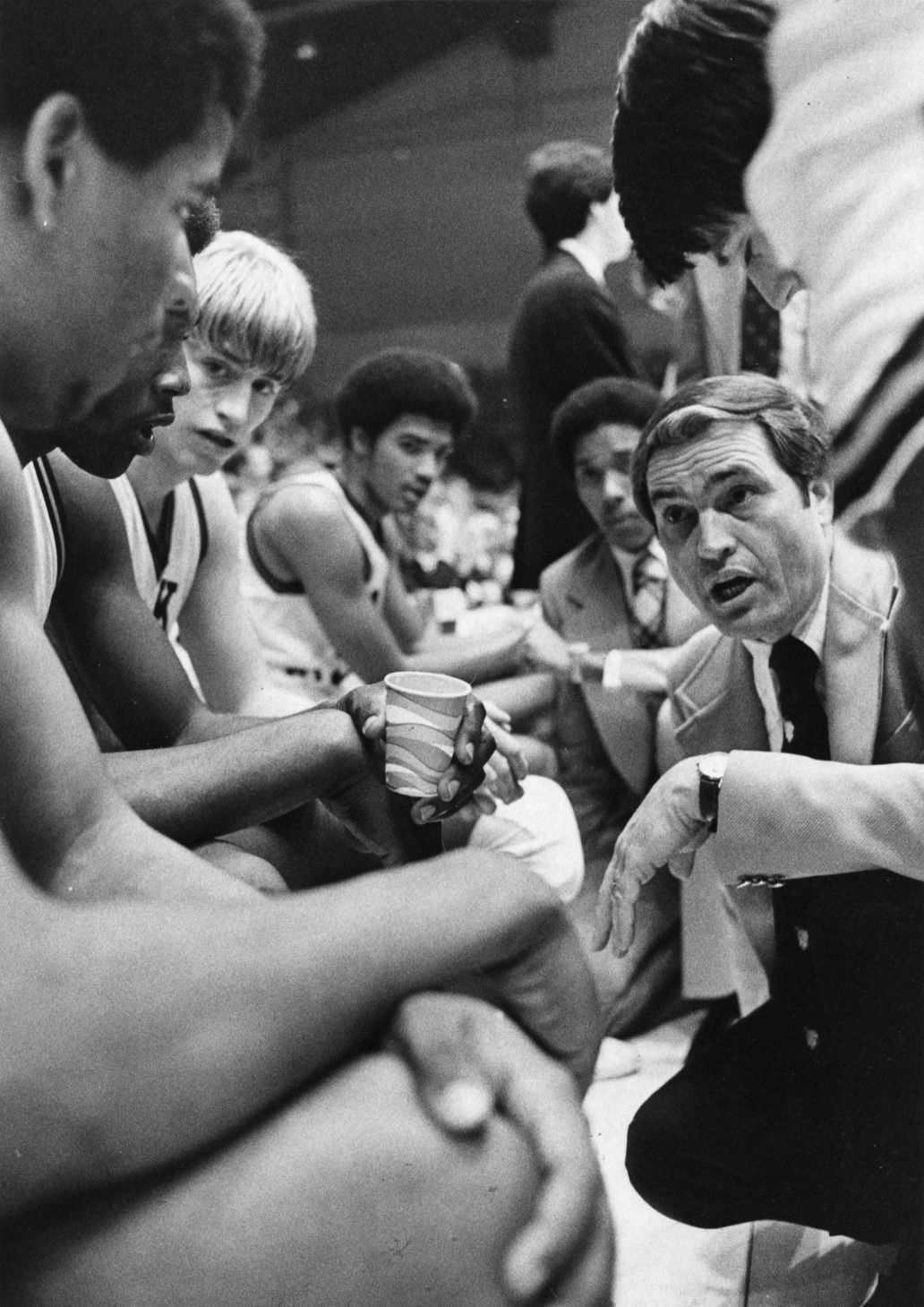 Wake Forest basketball coach Carl Tacy with his players during a March 1976 game against N.C. State.

Wake Forest basketball coach Carl Tacy with his players during a March 1976 game against N.C. State.

His quiet reserve belied a fiery competitiveness that made him one of Wake Forest’s most successful coaches. But the paradox of being a private person in a highly public sport would dog him throughout his career.

Tacy grew up in the tiny West Virginia town of Huttonsville and stayed close to home by enrolling in nearby Elkins & Davis College. He played four years of basketball there, the final year under legendary college coach Press Maravich.

It’s also where he met his wife, Donnie. They began dating in August 1955 and would marry on Christmas Eve that same year.

“I guess you’d just have to know mountain people to understand how that can happen,” Donnie Tacy once told a Journal reporter.

He graduated in 1956. After toiling for more than a decade, coaching at the high school and junior college level, he took a job as an assistant at Marshall University.

The following year he was named head coach and led the Thundering Herd to a 23-4 record and a berth in the 1972 NCAA Tournament, back in a time when fewer than 30 teams in the country went.

At the end of the season, Tacy was hired to lead Wake Forest after then-coach Jack McCloskey left to coach in the NBA.

It was the lure of coaching in the Atlantic Coast Conference that brought him here.

“It’s a little scary coming in to the ACC,” he said at the time. “But I think in time we will have the team to compete in it. I feel the ACC is the ultimate.”

He came to the league hoping to bring an uptempo style of play featuring a run-and-shoot offense and a pressing defense. But Tacy found his team had difficulty keeping up with more athletic teams such as UNC, Maryland and N.C. State.

So he switched to a half-court style of play. The Deacons won three of their next four and knocked off North Carolina in the first round of the ACC Tournament.

Tacy felt the key to recruiting was believing in what you have to sell. That approach helped him land players who would go on to standout careers as Deacons, including Skip Brown, Rod Griffin, Frank Johnson and Danny Young.

He raised eyebrows when he recruited 5-foot-3-inch guard Tyrone “Muggsy” Bogues out of Baltimore. Despite his diminutive stature, Bogues ended up having a stellar career at Wake Forest and became an popular NBA star.

From 1971 to 1981, the North Carolina-based ACC teams played in a two-night Greensboro competition called the Big Four Tournament. No coach was as successful in the Big Four as Tacy, whose teams won the event four times.

Behind the success, though, there grumblings, often tied to his aloof nature. Fans complained he was unapproachable.

And in 1983, a group of players went to the university’s athletic director to complain about the difficulties they had communicating with Tacy.

“Nobody can talk to him,” one player said.

Despite the complaints, Tacy kept his job.

One of his biggest wins came the next year, a Sweet Sixteen matchup against DePaul in 1984. DePaul was heavily favored and the media’s storyline for the game focused not as much on Wake Forest but on DePaul’s coach, Ray Meyer, who was trying to win a national championship in his last year his 42 seasons of coaching.

DePaul led most of the game and was up by eight points with just over three minutes to play. But Wake fought back to force overtime. Danny Young won the game by making a layup in the final seconds of the game, and Meyer walked off the court in tears.

The school’s yearbook, The Howler, noted that the game sparked a camaraderie that fed into the university’s other sports.

“That one basketball victory triggered a special feeling not only throughout the student body and faculty, but also throughout the Winston-Salem community,” yearbook staffers Jennifer Connell and Talmage Rogers wrote. “A celebration on the Quad lasted into the early hours of the morning.”

The Deacons lost the next game to eventual national runner-up Houston, led by their talented center, Akeem Olajuwon.

At the end of the season, the Deacons lost senior stars Young and Anthony Teachey, both of whom were selected in the second round of the NBA draft.

Tacy’s last game was a loss in the NIT Tournament, with mercurial star Kenny Green benched for missing a practice session.

Green opted to go pro after the season. Tacy was looking at rebuilding not only his team but his staff as well, following the departure of his top two assistants.

Yet immediately after the season, which is when most coaching changes are announced, there was no word from the university about Tacy’s future.

But in the summer, Tacy abruptly sent a note to athletic director Gene Hooks, telling him he was resigning.

“After careful thought and deliberation, I have reached a decision to make a job change that I believe is in the best interest of my family, the university and me,” he said.

He was a quiet about the reasons for his departure as he was on the sidelines coaching his team.

“I was shocked to receive the news of Coach Tacy’s resignation,” said then-athletics director Gene Hooks. “He administered a basketball program to Wake Forest that brought national recognition to the university.”

Tacy finished with a 222-149 record. At the time that made him the second-winningest coach in school history, behind Murray Greason.

He later said he regretted the timing of his departure.

Tacy was inducted into Wake Forest’s Hall of Fame that fall.

He took some time off after resigning, telling a Journal reporter: “My work has interfered with my fishing for too many years now. I will not allow that to happen in the years to come.”

He became an entrepreneur, co-owning a string of frozen yogurt shops. But they were eventually sold off one by one.

“I learned I was a much better coach than a business person,” Tacy said in a 2013 interview.

He spent much of his time in his later years hunting and fishing.

“The gentleman from West Virginia was not flashy nor flamboyant, but he was a private, strong-willed coach who built one of the most successful programs in the country. Because his accomplishments were achieved in such a low-key and methodical manner, many people failed to fully appreciate them – until they were gone.”

Carl Tacy, a former Wake Forest basketball coach who is in the school's Hall of Fame, has died

Carl Tacy, who was maybe one of the most underrated coaches in Wake Forest basketball history, has died at age 87.

Nice article. The good old days as they say.