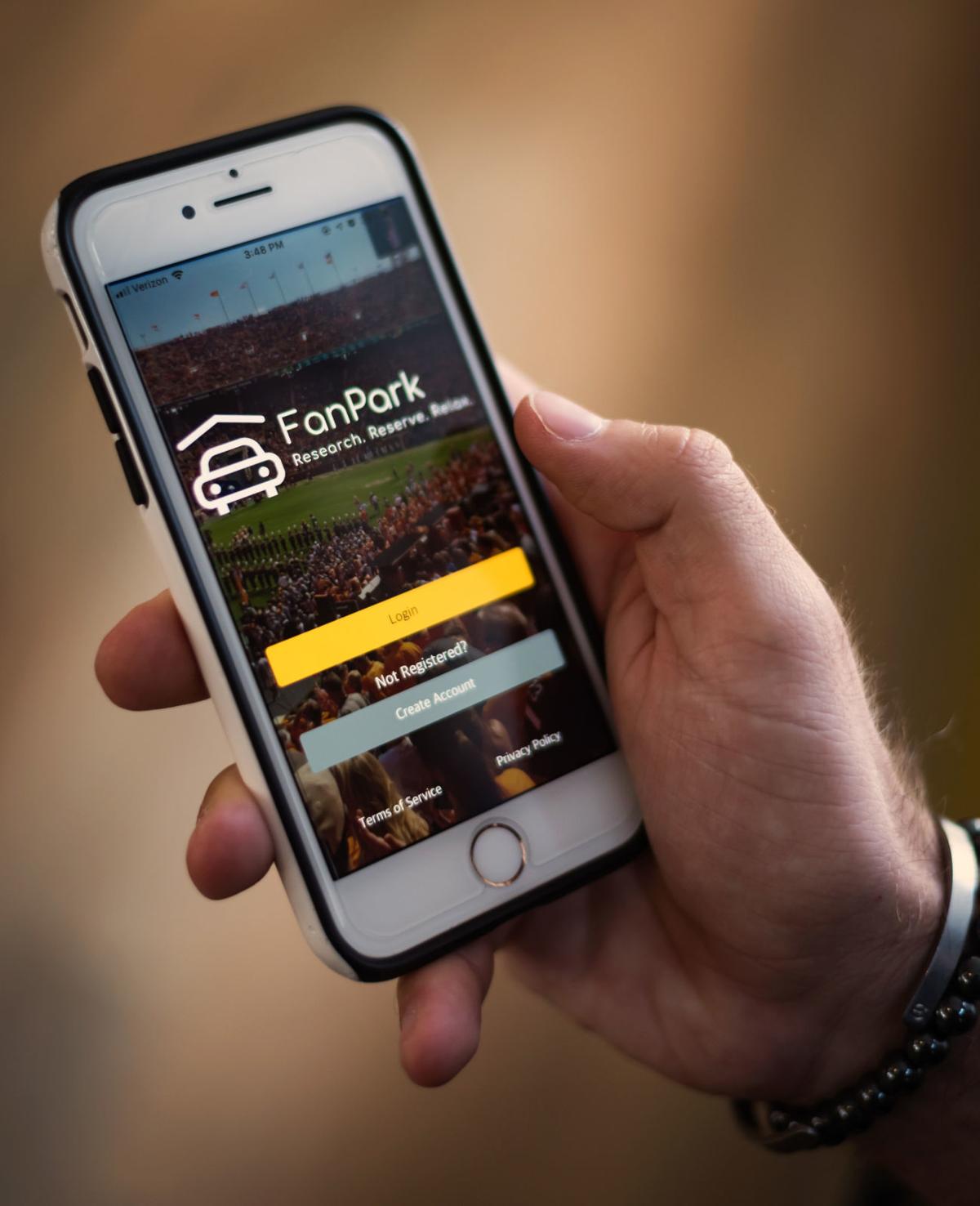 Harvey shows the homepage of the app that he created while at Wake Forest, called “FanPark.” 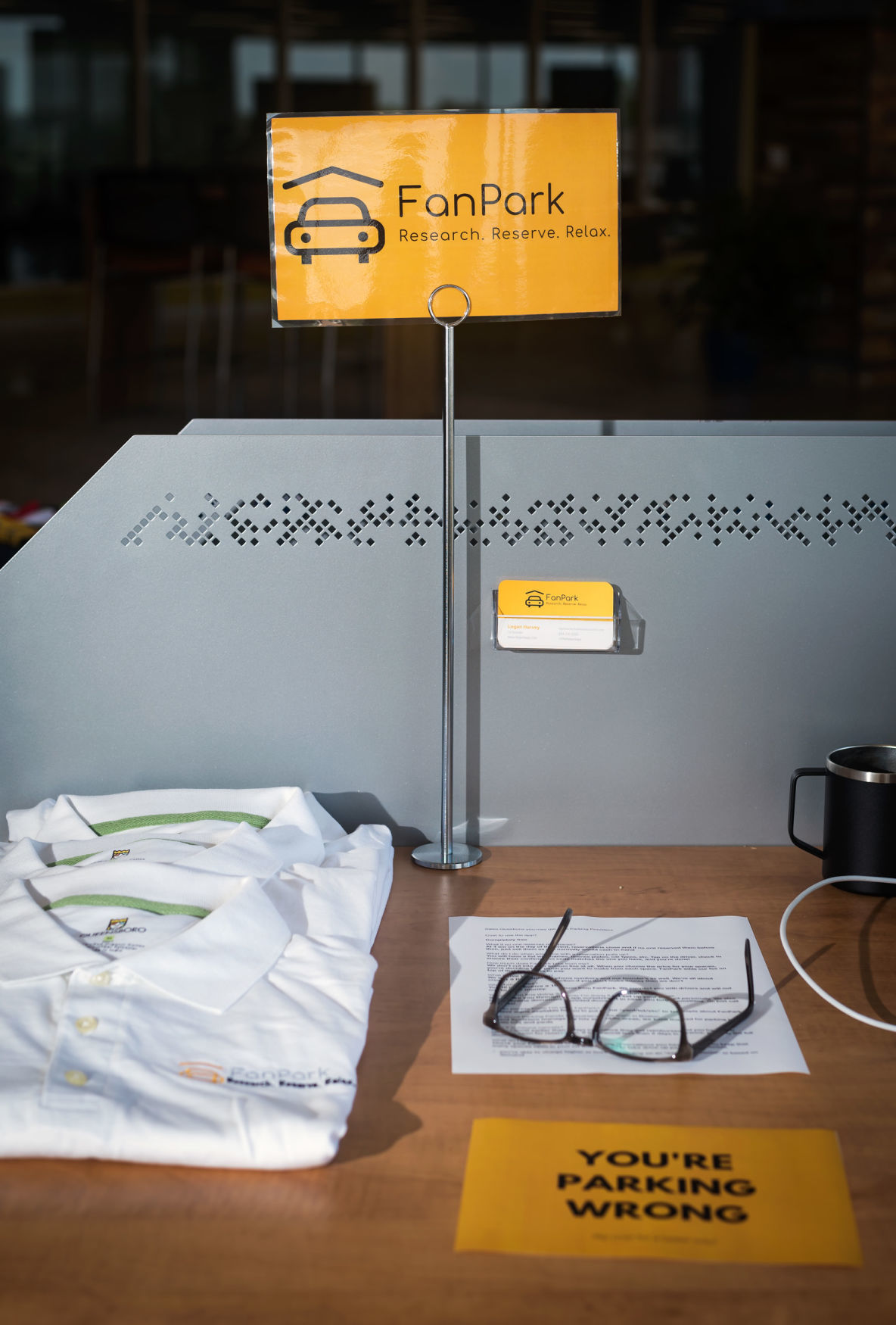 Logan Harvey’s workspace at 500 W. Fifth displays a couple of shirts he’s had made and a flier to increase awareness of his app, “FanPark.” 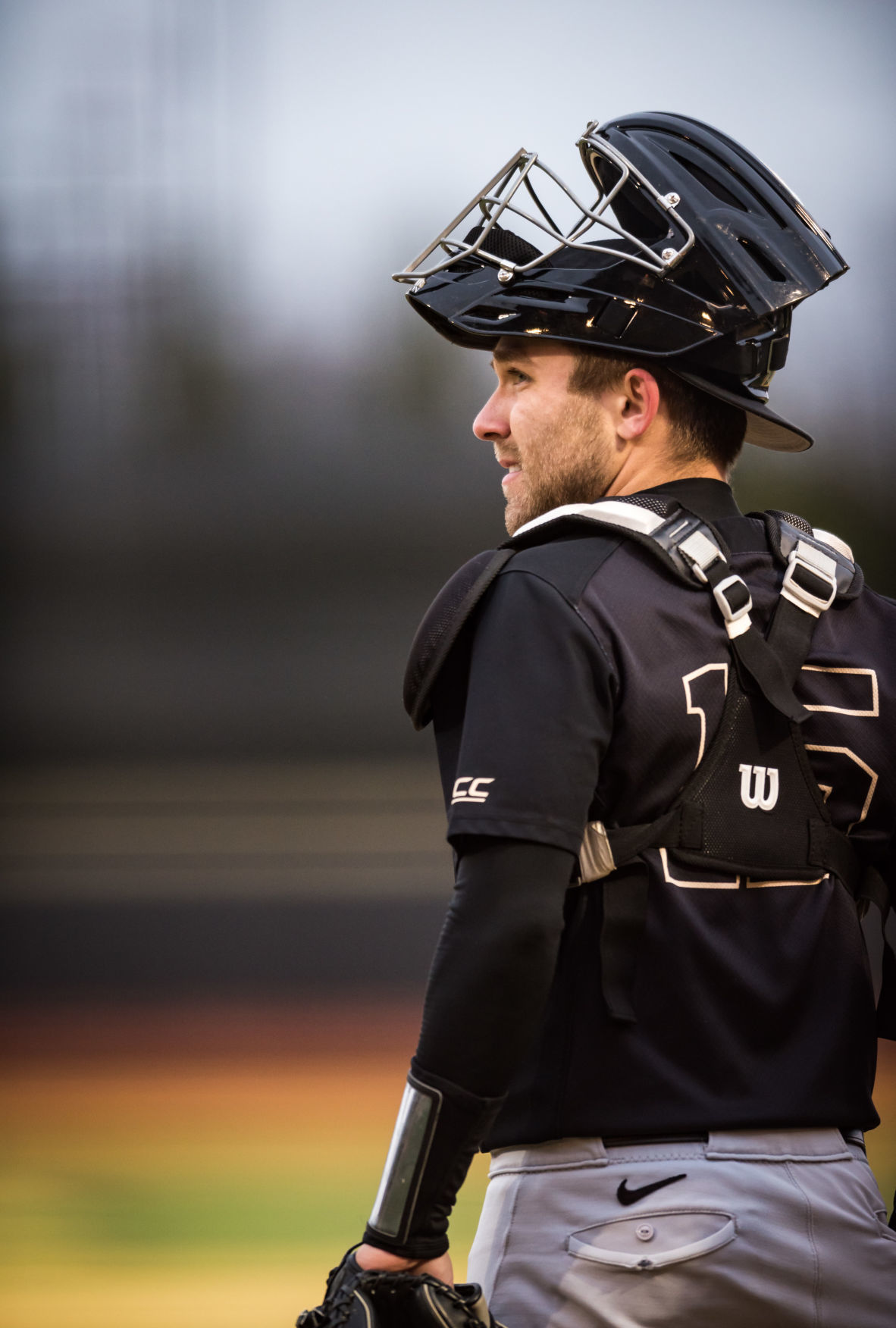 Wake Forest catcher Logan Harvey wrapped up his baseball career and graduated from the school in May, and was able to begin attaching his name to the app that he designed.

Harvey shows the homepage of the app that he created while at Wake Forest, called “FanPark.”

Logan Harvey’s workspace at 500 W. Fifth displays a couple of shirts he’s had made and a flier to increase awareness of his app, “FanPark.”

Wake Forest catcher Logan Harvey wrapped up his baseball career and graduated from the school in May, and was able to begin attaching his name to the app that he designed.

What started as a noble quest — solving the parking issue on Wake Forest’s campus — became so much more for Logan Harvey.

Harvey, a former baseball player at Wake Forest, was in an entrepreneurship class two years ago when a teammate in class with Harvey couldn’t make it to class on time because he couldn’t find a place to park. The class — Entrepreneurship 201 — focused on creating solutions to problems seen in everyday life.

“So I put it in my journal and I went to my professor and I was like, ‘I’ve got it: I have this idea that I’m going to solve parking on campus,’ ” Harvey said.

But who can solve parking on Wake Forest’s campus, right?

Harvey was redirected to apply his idea elsewhere. Maybe to a place that people might shy away from going to if the parking situation is poor enough.

Malls, shopping centers and Walmart were examined, but you can usually find places to park at such places; it might just require a long walk.

And thus “FanPark” was born.

FanPark is Harvey’s app that allows people to reserve parking spaces. Harvey describes the service as bringing the Airbnb model to special-event parking. It’s a bridge between parking providers and fans — ranging from sports fans to concertgoers to, starting this week, visitors of the Dixie Classic Fair.

“You’re able to go into the app, kind of shop around, and then make a reservation for a parking space ahead of time,” Harvey said. “We’ve seen how some things have been focused on … municipal parking. So if you go to a Boston or New York or things like that, you can get a meter, you can see where meters are. Whereas what we do is find the people that have these private spaces that aren’t being utilized.

“We found our niche, and now it’s just a matter of pushing into it and expanding it from there.”

And now Harvey is finally able to tell people it’s his business.

The NCAA’s rules strictly prohibit athletes from profiting off of their likeness — an issue that’s come to the forefront in recent days with Gov. Gavin Newsom of California signing the Fair Pay to Play Act, which says that starting in 2023 California colleges cannot punish their athletes for collecting endorsement money. Other states, South Carolina and Florida among them, have had pledges to follow California’s lead with similar legislature.

In Congress, Rep. Mark Walker of North Carolina has announced plans for a bill that would allow student-athletes to be financially compensated for use of their name and likeness for commercial purposes. Walker’s bill would change the definition of a qualified amateur sports organization in the tax code to remove restrictions on student-athletes, according to the Raleigh News & Observer.

But that’s in the future — and Harvey graduated from Wake Forest in May with a degree in politics and international affairs and a minor in entrepreneurship.

In the spring of his junior year at Wake Forest, Harvey entered the school’s start-up lab. It’s an accelerated program that takes an idea and turns it into a business in one semester, Harvey said.

“That was an interesting thing to be an athlete in that, so that’s when the NCAA came in,” Harvey said. “They keep a cap on what you’re able to do. So I had to sign a waiver, go through all that kind of stuff to actually be able to have this business, had to provide all this information that this was specifically my idea, this is why I have to be a part of it, this business doesn’t succeed without me.”

Harvey was able to attach his name to the company only after he graduated and Wake Forest’s baseball season ended, both in May.

He understands the regulations and the need to protect the amateur model. But “it felt almost as a detriment to be an athlete trying to do this.”

“And while I do understand where they’re coming from, it’s something that I wish was different,” Harvey said. “Obviously it’s a complex situation and I can’t just say, ‘Oh, let me do whatever I want.’

“But the hard part is I was somebody who played baseball and also had an app, I wasn’t just a baseball player. Sometimes I felt like I was pigeonholed into just that category, and then not have been able to access my personal connections.”

It’s not a surprise to Tom Walter, Harvey’s coach with Wake Forest’s baseball team for the past four years, that Harvey has a well-thought-out view of the limitations placed on FanPark while Harvey was still under the student-athlete tag.

“He wasn’t your typical 18-year-old freshman who was kind of running around with his hair on fire,” Walter said. “He was a kid who was very composed and mature and very serious about his work and very intentional about everything he did.”

That includes being sure to successfully navigate the NCAA’s caution-tape path to facilitating his business’ growth.

“The NCAA certainly has some restrictions on how you use your status as a student-athlete, and he’s gotta be very careful,” Walter said. “And Logan was always careful that he went through compliance every step of the way and making sure he was dotting I’s and crossing all the T’s.”

One of the most important early moments for Harvey and FanPark was last season’s Clemson-Wake Forest football game.

Attendance that day at BB&T Field was 31,608, a sellout, and the majority was orange-clad visiting fans. A radio show in Clemson earlier that week learned of FanPark — organically and without prodding, Harvey said — and suggested it to fans traveling to Winston-Salem.

“We were able to become revenue-producing (last) fall. The Clemson game was a big, big pull,” Harvey said.

This fall has brought another big pull for Harvey and FanPark.

The Dixie Classic will have a VIP parking lot off of Shorefair Dr. in which $16 will reserve a spot through FanPark. It will open at 11 a.m., when the gates open every day other than Saturday (when they open at 9 a.m.), and close at 8:15 p.m.

The fair’s website advertises using FanPark with the following description:

“Use the FanPark app to reserve your Fair parking ahead of time! Arrive at your convenience, knowing you have a spot whenever you arrive. Pay for the convenience of knowing where you’re going when you leave home, and safety walking across the street for entry to the fair. Lot will open daily at 11 a.m. and all vehicles must be out of the lot by 8:15 p.m. No driving around looking for the best spot, no driving around wondering where to go and no sitting in traffic!”

Harvey was nearly laughed at when he suggested he would be the one to solve parking issues on Wake Forest’s campus.

“He was like, ‘Yeah, you and everybody else that’s come through this program,’” Harvey said of the reaction. “And so my professor was like, ‘Think of a place where parking really matters. Where is some place that you’re not going to go if you can’t find parking?’”

Now it’s fair to say Harvey has found his parking spot in the business world.

Logan Harvey works out of Winston Starts, a startup-company incubator that has offices on the fourth and fifth floors of the 500 W. Fifth building in downtown Winston-Salem.

It’s a space that has become a landing spot of sorts for Wake Forest students, in particular student-athletes. Harvey remembers visiting the offices while still at Wake Forest and envisioning himself working out of the offices.

Jeanna Carr is the co-founder and CEO of Rent Assured, a service that connects renters with landlords and aims to make sure those parties are on the same page. During the summer, Wake Forest men’s soccer player Dominic Peters was working with Carr to create an advertisement.

“One of the things that kind of drew me to student-athletes is their drive, their (competitive) mindset and their ability to multitask and focus,” Carr said. “It’s symbiotic relationships. Not only do they get to see part of their community and look up from the books and look up from the ball, they … immerse themselves.”

While the NCAA restricts profitability of student-athletes, they’re able to gain valuable experience at Winston Starts.

“I think the student-athlete department has been amazing in challenging athletes to not just focus on their sport, but to also focus beyond that,” Peters said.