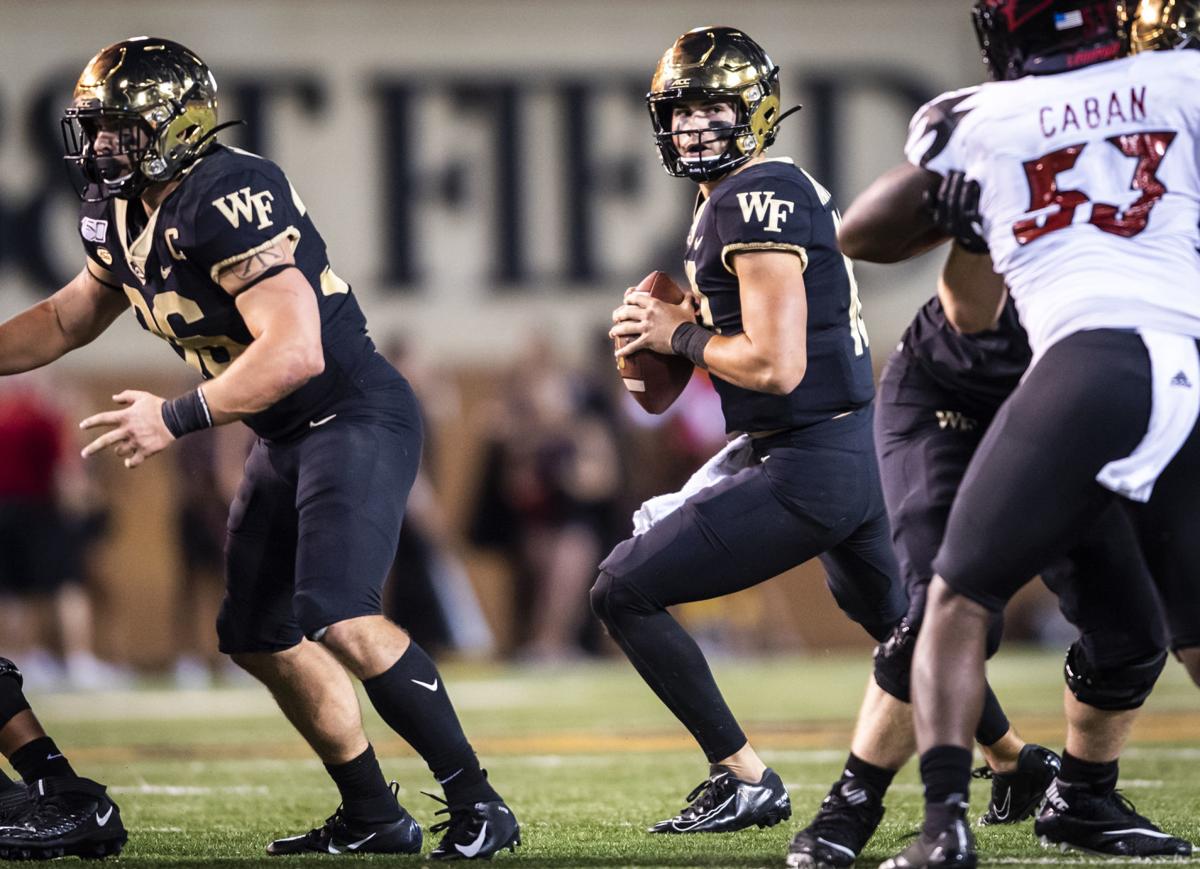 Quarterback Sam Hartman of Wake Forest rushed for two touchdowns and threw for another in Wake Forest’s final three possessions against Louisville on Saturday night. 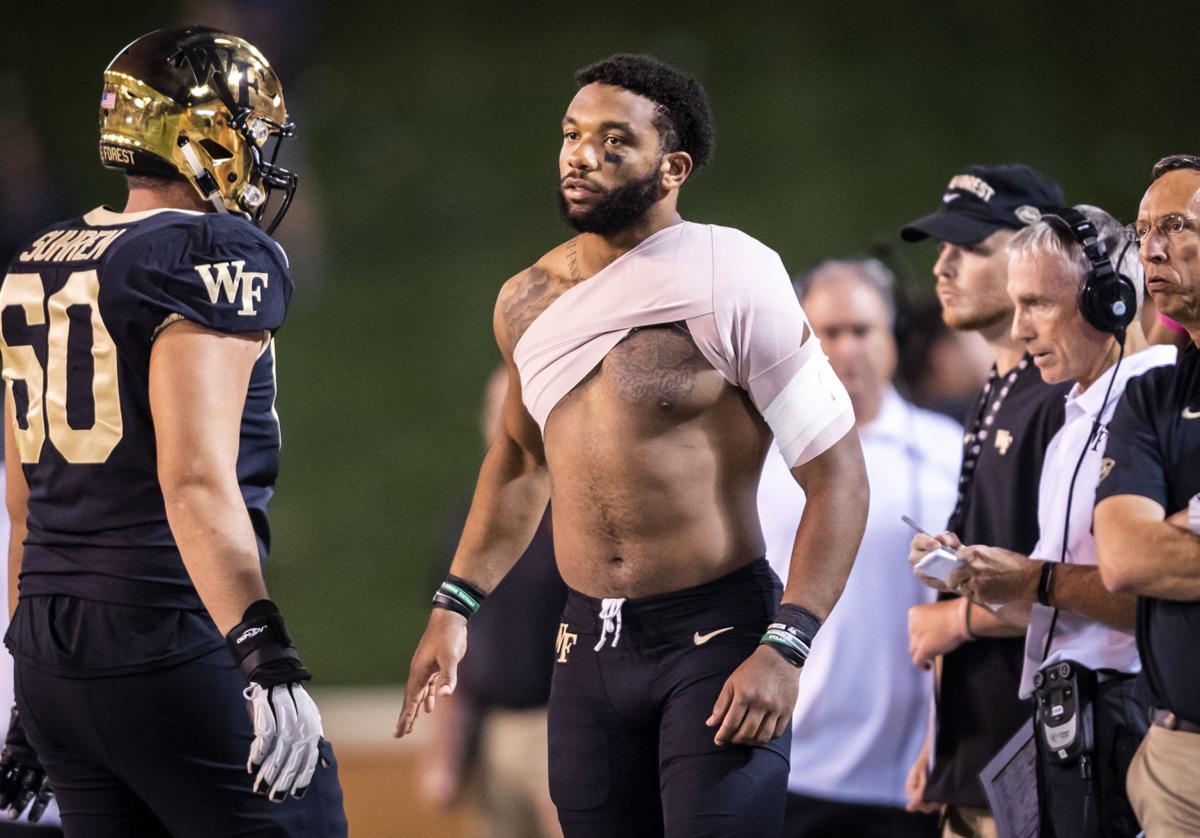 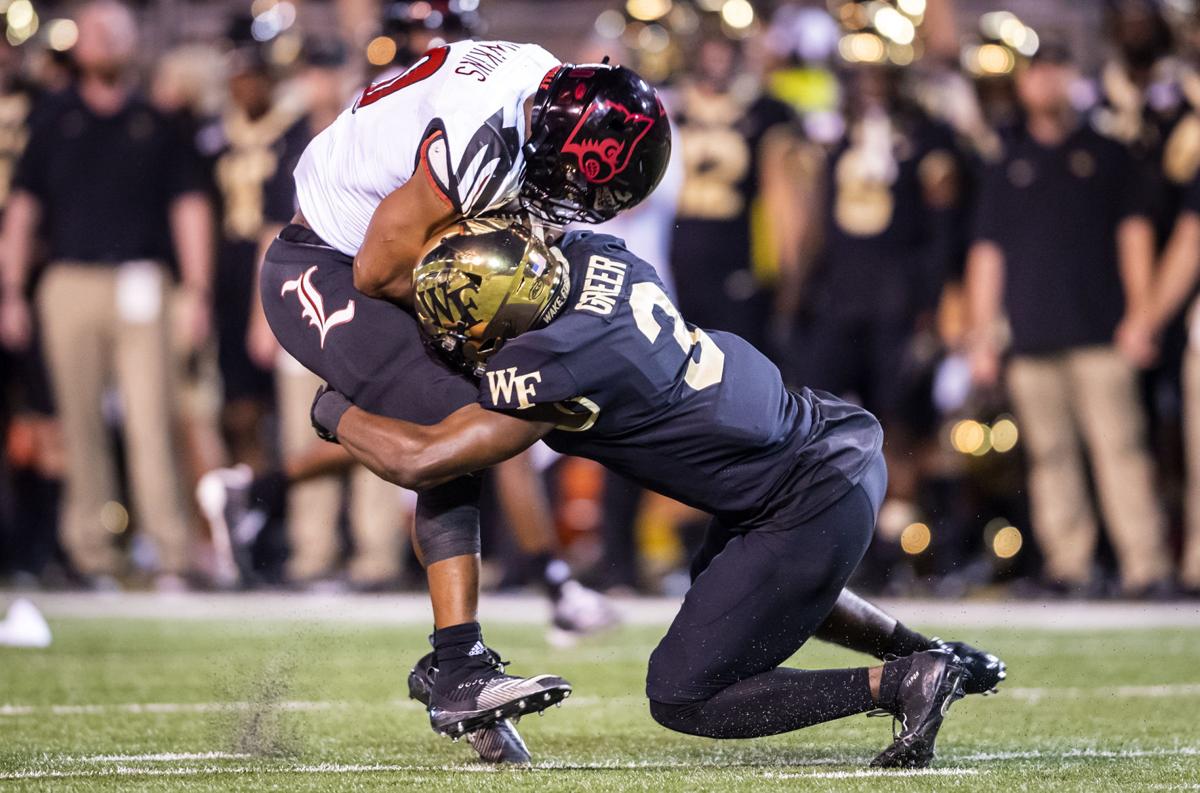 Quarterback Sam Hartman of Wake Forest rushed for two touchdowns and threw for another in Wake Forest’s final three possessions against Louisville on Saturday night.

But Louisville managed to outpace the Deacons in a wild 62-59 win Saturday night at BB&T Field, and now the Deacons are left to gather themselves after their first loss of the season.

Wake Forest saw similarities in Louisville’s offense to that of Boston College, in that both teams use multi-back formations and two-tight end sets. The pacing of each is different, and Louisville doesn’t have an A.J. Dillon equivalent, but there was enough, Coach Dave Clawson explained, to approach them in similar ways.

That meant that the Deacons’ cornerbacks were asked to keep everything in front of them.

The Cardinals used two quarterbacks, Micale Cunningham and Evan Conley, to throw for a combined 295 yards and four touchdowns. The second touchdown of the game was a 55-yard catch-and-run by Seth Dawkins, and early in the fourth quarter the Cardinals’ three-touchdown lead was restored on a third-and-4 connection between Conley and Dez Fitzpatrick, who ran past Amari Henderson.

“I don’t know how many plays got over our head,” Clawson said. “It certainly doesn’t feel like we played well in the secondary. And, you know, that’s a problem.”

It’s too easy to label it not-so-special special teams.

“Our special teams were atrocious tonight,” Clawson said. “I mean, we got to the point that we had to sky-kick it. We didn’t even trust ourselves to cover it. … All year, I think we’ve been a focused, disciplined football team and tonight we were not. Our focus to come into the game was awful.”

There’s likely a hollow feeling to this, but the 668 yards of offense that Wake Forest piled up is the second-most in program history, and it means four of the five highest totals have come in the past two years.

The program record is 734, which was reached in the Deacons’ win at Syracuse two seasons ago. The third-most is 646, which was in the Belk Bowl victory against Texas A&M, and the fifth-most was 625 against Louisville two years ago.

The outlier was 51 years ago — the Deacons rolled up 632 yards against North Carolina in 1968.

Jamie Newman suffered a left shoulder injury — seemingly in the first half — and was unavailable for post-game interviews because he was being evaluated. His status for Saturday’s game against Florida State will likely be carefully monitored by the Deacons’ training staff.

Newman threw for 251 yards and three touchdowns against Louisville, returning to the game after his apparent injury. But he was replaced by Sam Hartman, for one possession in the first half and then for Wake Forest’s final three possessions — those final three all resulting in touchdowns (two throwing, one rushing for Hartman).

In Hartman’s first appearance of the season, he completed 9 of 15 passes for 172 yards.

“I just had to stay ready — honestly it’s the same thing I’ve been doing all year, just staying ready, staying positive and just glad that the coaches believed in me and let me showcase stuff, but I couldn’t have done it without the guys around me,” Hartman said. “Especially the O-line up front, just telling me every play, ‘Hey, we got you, hey, we got you.’

“And the receivers of course, I mean, I’m hitting simple routes and those guys are going out and making those big, after-catch plays.”

If nothing else, Saturday night proved again that Wake Forest has a pair of talented quarterbacks.

The 24-hour rule works both ways, though for the first time this season the Deacons will apply it to a loss.

Clawson and players who were interviewed Saturday night were clearly disappointed with the way Wake Forest started the game, and with the result — but there’s also the acknowledgement that one loss doesn’t have to wreck the season.