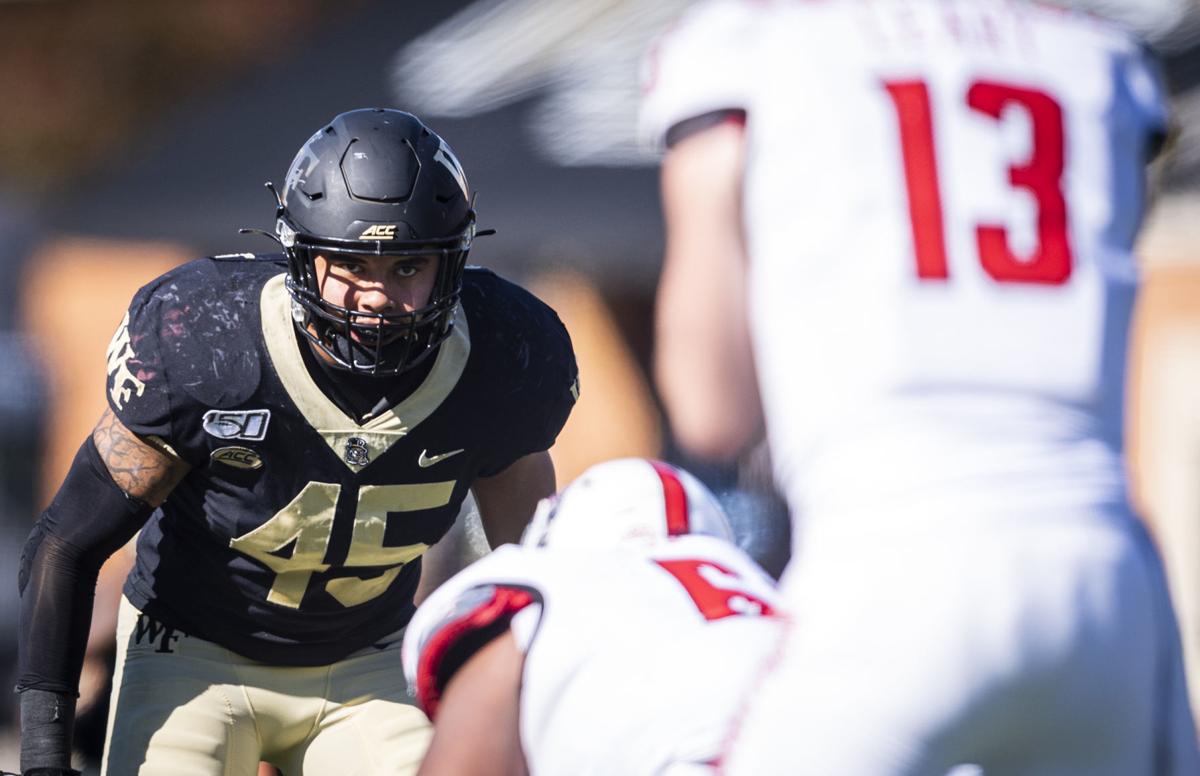 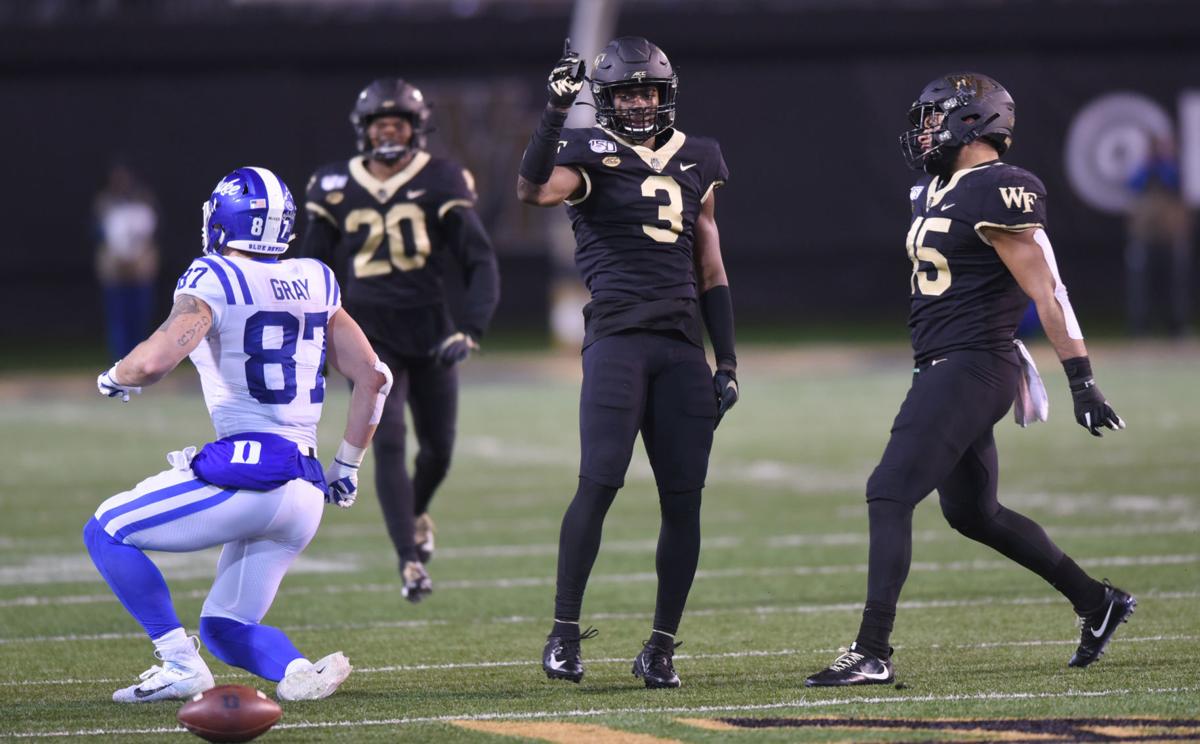 Wake Forest safety Nasir Greer, second from right, celebrates after breaking up a pass intended for Duke’s Noah Gray in the fourth quarter of the Deacons’ win over Duke last week. The Deacons enter today’s regular-season finale at Syracuse allowing third-down converstions at a rate of 29.7%, which is 12th in the country.

Wake Forest safety Nasir Greer, second from right, celebrates after breaking up a pass intended for Duke’s Noah Gray in the fourth quarter of the Deacons’ win over Duke last week. The Deacons enter today’s regular-season finale at Syracuse allowing third-down converstions at a rate of 29.7%, which is 12th in the country.

There’s work left to be done for Wake Forest’s football team, but there’s also one particular aspect that has shined throughout season — and it’s unlikely to become a blemish in the final two games.

“If you look at a statistical comparison of us from ’18 to ’19, there’s not one area in our football team that’s more improved than our third-down defense,” Coach Dave Clawson said.

The Deacons allowed third-down conversions at a 42.2% clip last season, which was 98th in the country.

The Deacons enter Saturday’s regular-season finale at Syracuse allowing third-down conversions at a rate of 29.7%, which is 12th in the country (going into Friday’s games).

“We push each other to just keep getting better and better because the minute you slack off is when you do terrible on third downs,” sophomore linebacker Ryan Smenda Jr. said. “Every week, the coaches preach attitude and effort and then we build that mentality going into the game.

The emphasis was clear in spring practice and throughout fall camp. Defensive coordinator Lyle Hemphill and the defensive staff were tasked with addressing the third-down woes.

Wake Forest held Duke to a 1-for-11 mark on third downs last week, the best percentage of the season. In the three losses, Wake Forest has allowed a 33.3% conversion rate — which would still be tied for 22nd in the country.

The numbers speak for themselves, and Clawson was quick to point out that credit for the improvement goes to Hemphill and the coaching staff.

“They knew after last season it was a problem. We lacked consistency in our third-down package. And we spent a lot of time on it. We continue to spend a lot of time on it, but we have a package,” Clawson said. “We got a certain volume of defense ready in spring and preseason camp so that when we install things in game week, it’s not new stuff.”

That’s something the players have recognized, too.

“From the spring, Coach Hemphill, we knew we had to get better on third down,” said sophomore safety Nasir Greer, who had a third-down pass break-up in the fourth quarter against Duke. “We practiced so hard in the spring, summer, fall camp, put a big emphasis on winning third down and I really think it translated all year this year.”

Wake Forest struggled to finish drives defensively last season, and has reversed that aspect this year.

There’s another aspect that can be repeated and is related to finishing things: Wake Forest finished its season strong a year ago, with three wins in the final four games, the middle of those being a 59-7 win at Duke in the regular-season finale.

A win at Syracuse would send Wake Forest into a bowl game at 9-3 with a chance to capture the second 10-win season in school history.

Clawson has said since arriving in Winston-Salem that he wants the Deacons playing meaningful games in November — and Wake Forest is certainly still doing so. Now it can finish with a winning November record (3-2) for the first time since 2008.

“There’s been a lot of talk and a lot of people are excited, like they should be, about what this season has brought and what it’s meant, but we have to stay in the moment. I think that’s huge,” senior running back Cade Carney said. “Especially when you get more people talking about you and it’s not so much we’re creating our own juice, but there’s a lot of people talking around us and there’s a lot of buzz and that’s great.

“But we have to be able to stay in the moment and to focus on what’s right here this week.”

Where: The Dome, Syracuse, N.Y.

Extra points: Wake Forest can win nine regular-season games for the second time in school history — the other being 2006 (when the Deacons won 10). … Redshirt senior offensive lineman Justin Herron is expected to start, and if he does he’ll tie Wendell Dunn’s program record for starts with 50. … Kendall Hinton has 42 catches for 688 yards in the last six games. … Justin Strnad has missed the past four games and still leads the team with 69 tackles. Nasir Greer has 65 and Ryan Smenda Jr. has 63. … There have been five 100-points-scored seasons in Wake Forest history. Nick Sciba scored 107 last year and has 104 this year — the other 100-plus seasons were by Mike Weaver (115 in 2017), Brian Piccolo (111 in 1964) and Sam Swank (102 in 2006). … Syracuse quarterback Tommy DeVito has thrown 167 passes since his last interception. … Wake Forest is third in the ACC with 11 interceptions. Four of those have been by Amari Henderson, who’s tied with Clemson’s Tanner Muse, Syracuse's Andre Cisco and Virginia Tech’s Caleb Farley for the ACC lead. … Syracuse’s Trishton Jackson is fourth in the ACC with 82.9 receiving yards per game. He’s tied for second in the ACC with 10 touchdown catches, trailing Sage Surratt and Louisville’s Tutu Atwell (who both have 11). … Syracuse has allowed 48 sacks this season, surrendering 4.36 per game. That’s as many as Wake Forest allowed in 2014 (in one fewer game).