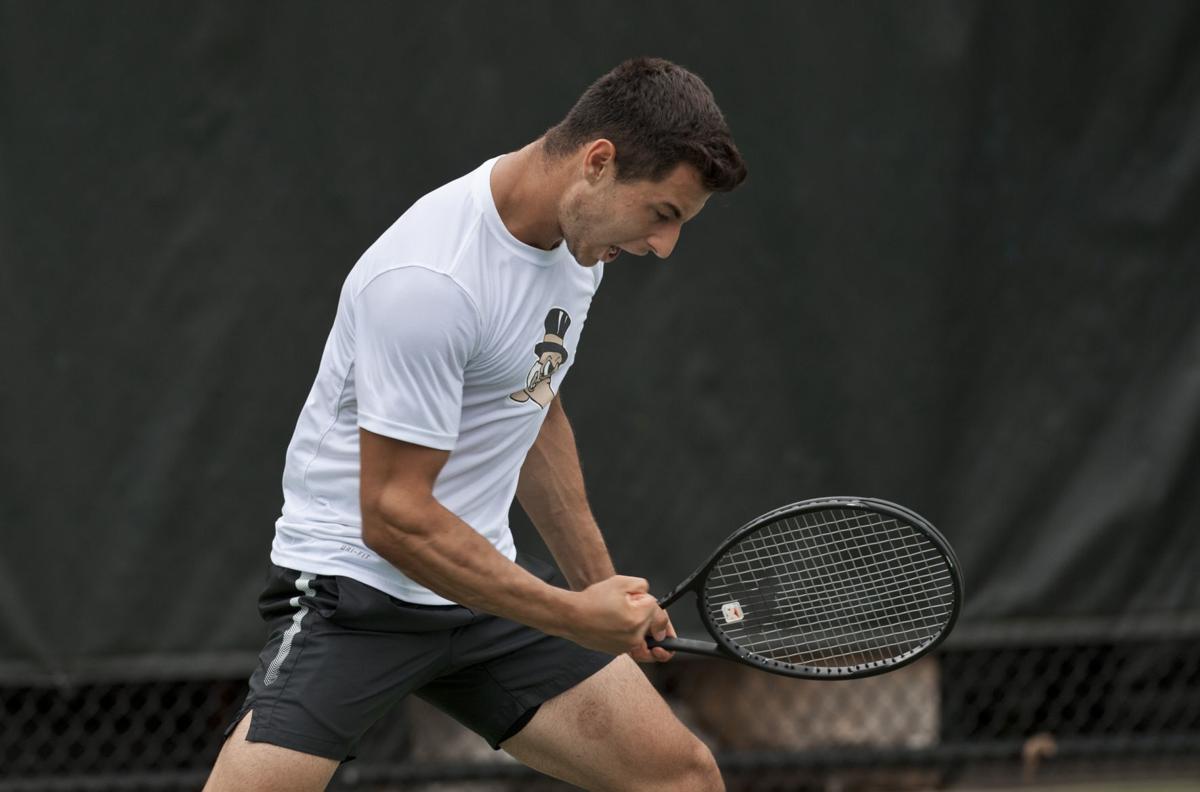 Wake Forest’s Rrezart Cungu celebrates after coming from behind to win the first set against Kentucky’s Cesar Bourgois during the second round of the NCAA Tournament at Wake Forest Tennis Center. 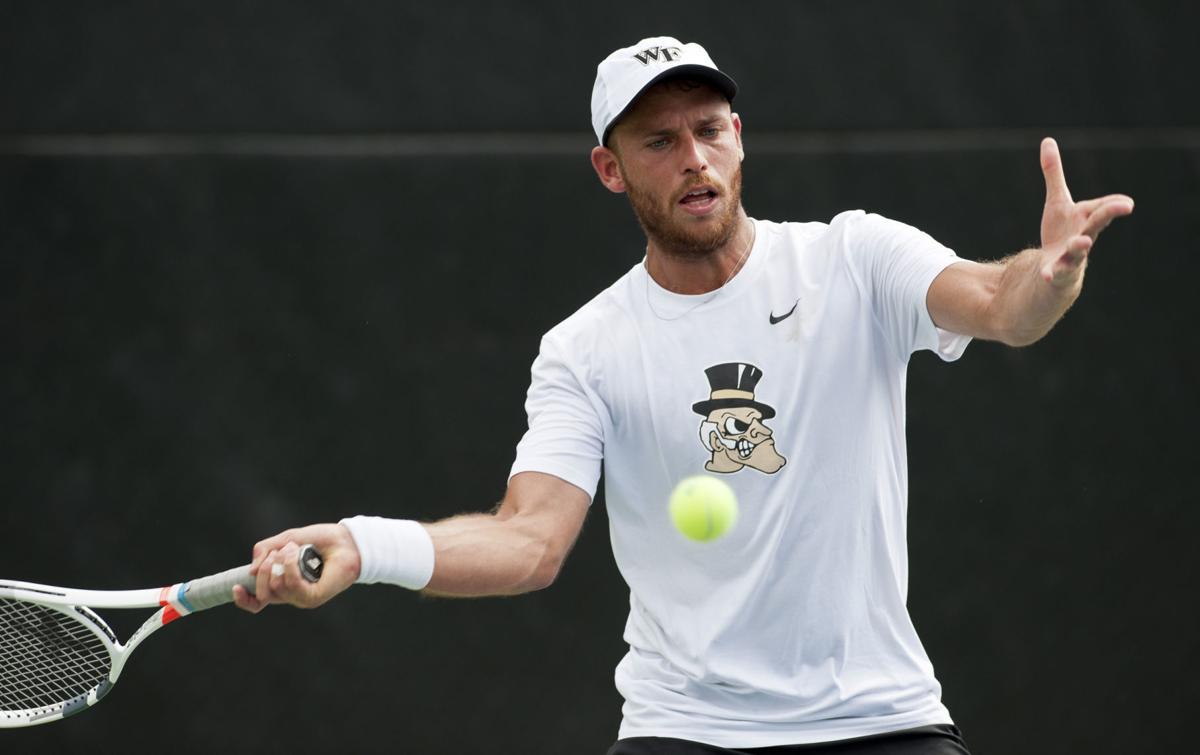 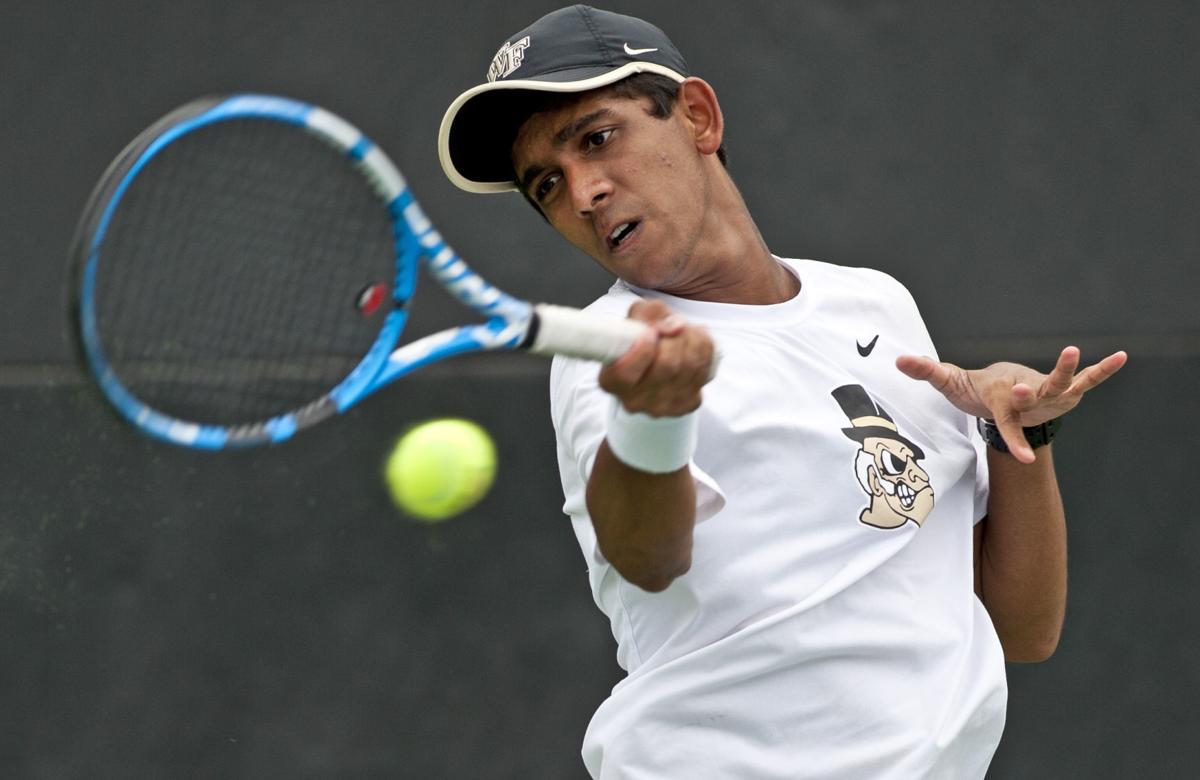 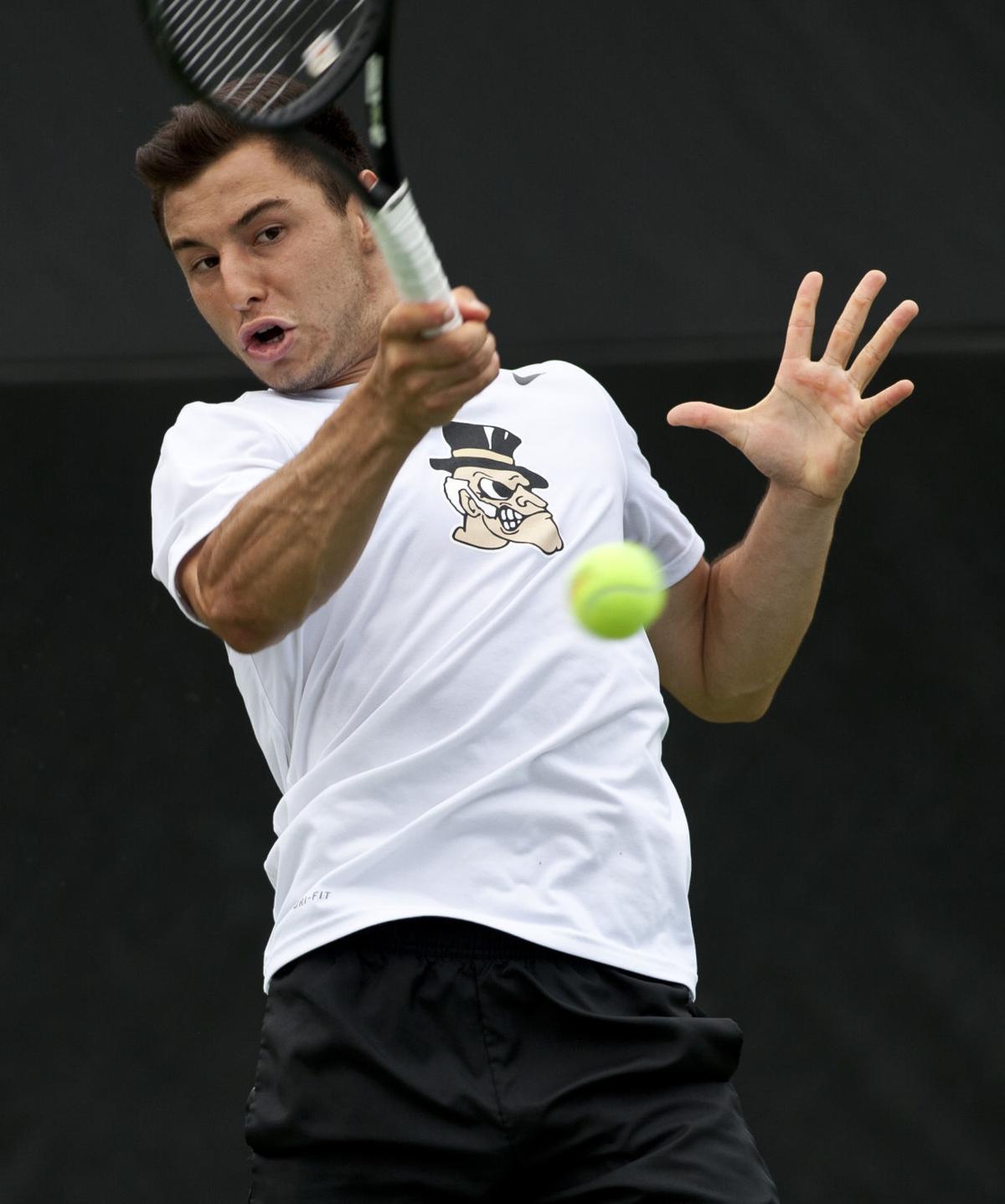 Wake Forest’s Rrezart Cungu celebrates after coming from behind to win the first set against Kentucky’s Cesar Bourgois during the second round of the NCAA Tournament at Wake Forest Tennis Center.

Fourth-seeded Wake Forest’s match against Kentucky in the second round of the NCAA Men’s Tennis Tournament was about one thing — survival.

The Deacons defeated the Wildcats 4-1, but the final score does not reflect how close the match was. Bar Botzer, playing in the No. 3 singles match, won the clinching point after losing the first set, and both Petros Chrysochos and Rrezart Cungu were pushed to three sets after each winning the first set. Both matches were stopped after Botzer defeated Kento Yamada 2-6, 6-3, 6-3.

“I just hoped — there was one point where I just hoped just not to lose,” Botzer said. “I kind of saw four of my guys were cruising. So I wasn’t that nervous. Obviously, I wanted to win my match. But it’s more important for me that the team wins.”

Struggling at different points of matches is something that Botzer has battled in his three seasons at Wake Forest.

“I think I play guys I’ve never seen before I don’t know what to expect,” Botzer said. “They might know a little bit more about me than I know about them. And sometimes it takes me a little bit of time to adapt to the conditions or how the guy plays or whatever, but once I kind of figure this thing out, then it usually works out fine.”

“I think the last four matches could’ve gone either way,” said Coach Cedric Kauffmann of the Wildcats (16-15). “We had breaker at 1, at 2. I think we started the third a little slow, but I think it was going to get close. Every match was tight, 1-4, we kind gave up a little too easy at 5 and 6. Congrats to Wake. They’re a good team.”

Kentucky (16-15) took a 1-0 lead after winning two of the three doubles matches that all went to tiebreaks. The No. 2 doubles match was stopped when the Wildcats clinched the team point.

“They’re all going to be close at this point,” Coach Tony Bresky said. “We lost the doubles, but I felt like we were going to win, hopefully, all the singles matches.”

Wake Forest has lost 10 doubles points in 34 matches this season. The Deacons are 9-1 in those matches, with the only loss coming in February against No. 1 Ohio State in the ITA National Team Indoor in Chicago.

“In perspective it depends on how you look at it,” Bresky said. “So if we’ve lost (10) doubles points and we’ve only lost three matches on the year, like I said, we haven’t lost a match with a healthy lineup this year.

“So the way I look at it is, there’s less pressure on our guys in doubles. It’s way more pressure on the other team because what are they thinking if we win the doubles?”

Wake Forest evened the match at 1-all after freshmen Siddanth Banthia defeated Ying-Ze Chen 6-1, 6-0 at No. 6 singles, and Wake Forest took the lead after freshman Melios Efstathiou defeated Kevin Huempfner 6-0, 6-3 at No. 5. The Deacons, the defending national champions, took a 3-1 lead after No. 1 Borna Gojo defeated Enzo Wallart 6-0, 7-6 (3).

“You lose the doubles point against a solid team and you win 4-1, I think you should feel pretty good about it,” Gojo said. “So it definitely gives us confidence. We’ve been through all of this last year with a couple of guys, and a couple of guys didn’t. But the freshmen are reacting really good so far.”

“To be honest, credit to their guy,” Bresky said of Cungu struggling to close out the match. “You know, he came up big in a couple of those moments. ... It’s one of those things where that’s sports. Things can go not your way and it didn’t go his way, for sure a little bit there. You know it was going to be interesting to see how he was going to bounce back there at the end. He’s a tough kid, and I think he would’ve left it all out there.”