When Cincinnati moved to lure Doug Gillin from Appalachian State last month, it resulted in a contract extension for the athletics director that App State board of trustees approved on Dec. 13.

The school released the details of his new contract today, and they show a reward for the athletics program's trajectory and also an intent to ward off other suitors. Gillin is receiving two more years to his deal, locking him in through 2024, along with roughly a 60 percent increase to his base salary and doubling of his annual retention bonus. 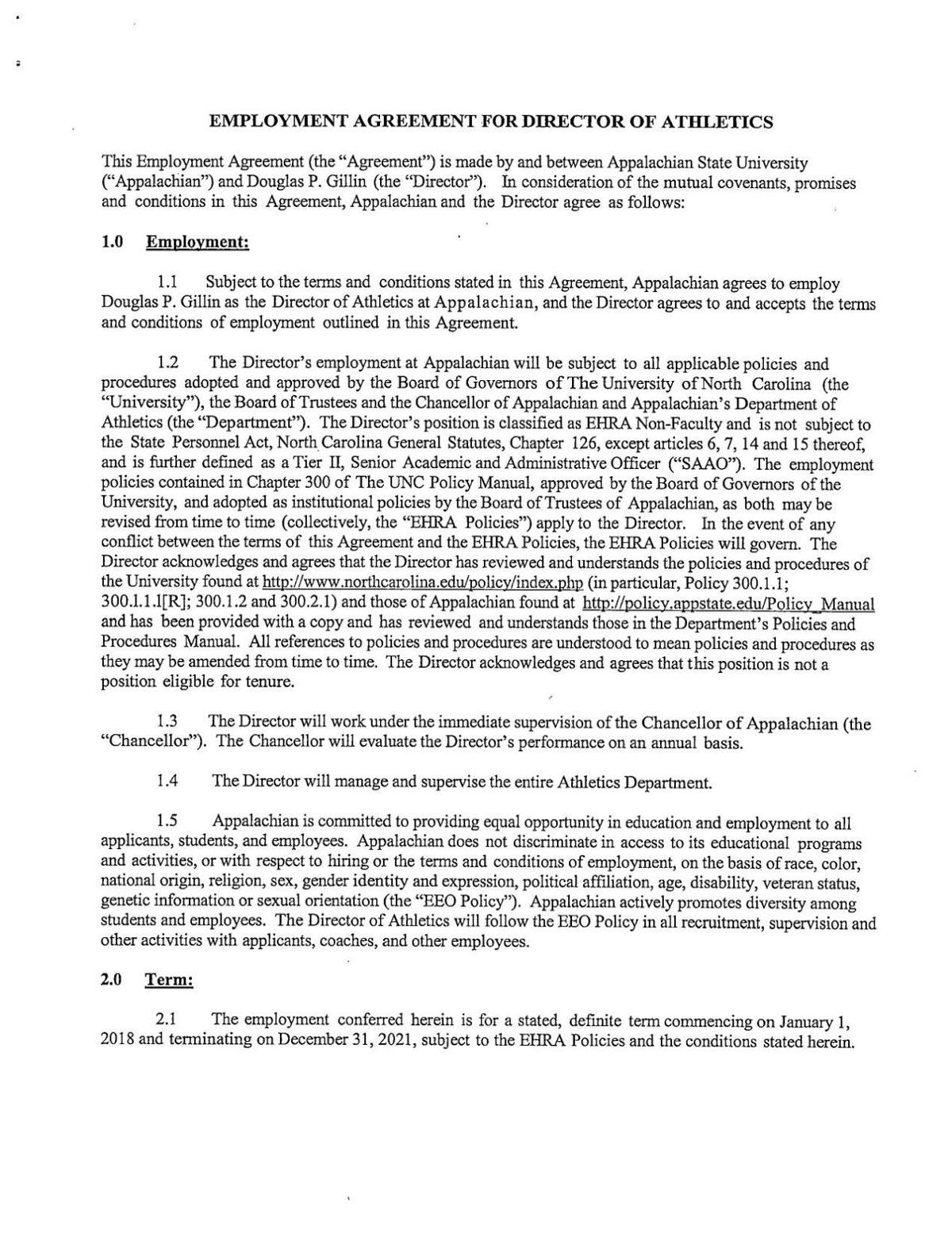 Gillin will make $450,000 in base salary this year, according to the contract amendment. And he will see a 4.5 percent increase with every year going forward. That means his annual base salaries will be:

The athletics director will also see his year-to-year retention bonus double. In 2018 and 2019, Gillin earned an extra $25,000 apiece for remaining employed at App State each year. That bonus is now $50,000 under the new extension.

Gillin was hired at App State in 2015 and signed his first extension in March 2018. One of the main staples of his tenure has been strong scheduling in football. He brokered games against high-profile programs and series against fellow in-state programs alike.

The series against South Carolina and North Carolina features home-away-home setups, while the ECU and Charlotte series are homes and homes, with App State flexing the 2021 ECU game to Bank of America Stadium in Charlotte.

App State converted on their first trips to Chapel Hill and Columbia, S.C. The Mountaineers beat the Tar Heels 34-31 on Sept. 21, then beat the Gamecocks 20-15 on Nov. 9.

On top of that, Gillin has led the charge in two major construction projects that are currently under way. The new end zone facility will open in phases, allowing it to be used for the 2020 football season.

The Appalachian 105 project is in the design phase and will be the new home for the softball, tennis and track and field programs.

The track around the football field in Kidd Brewer Stadium will be removed, and a new scoreboard was installed before the 2017 season. A new video board was also added to the Holmes Convocation Center.

Gillin has also some of the more successful coaches currently in the department. He inherited a strong football coach, Scott Satterfield, and hired a successful replacement, Eliah Drinkwitz.

Satterfield went to Louisville in 2018, and Drinkwitz is the new coach at Missouri after a 12-1 record in his lone season with the Mountaineers. He replaced Drinkwitz with Clark, who won his debut in the New Orleans Bowl, a 31-17 win over Ala.-Birmingham.

Before coming to App State, Gillin worked as deputy athletics director of Missouri for three years. Before that, he had a 10-year career in Winston-Salem, first with ISP and then with IMG College when the latter acquired the former.