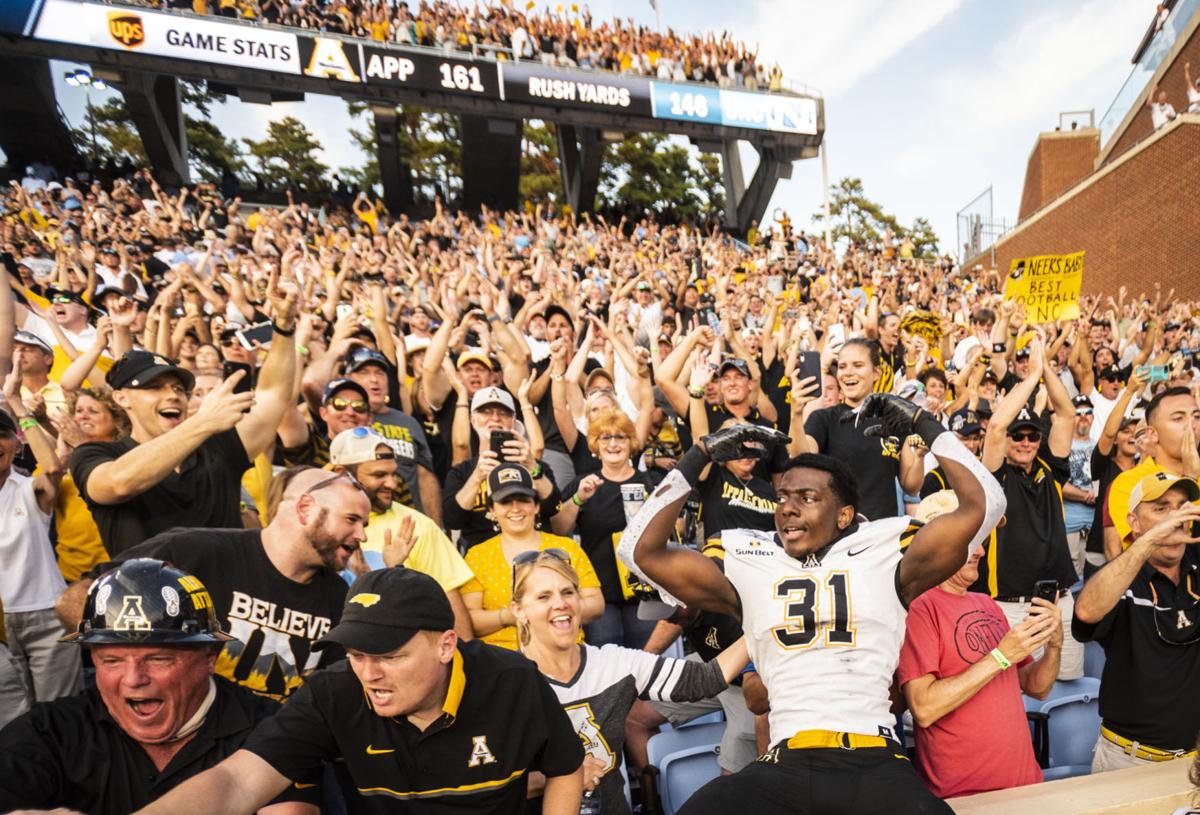 Freshman linebacker Nick Hampton of Appalachian State (31) celebrates with the crowd after the Mountaineers defeated UNC on Sept. 21 in Chapel Hill. 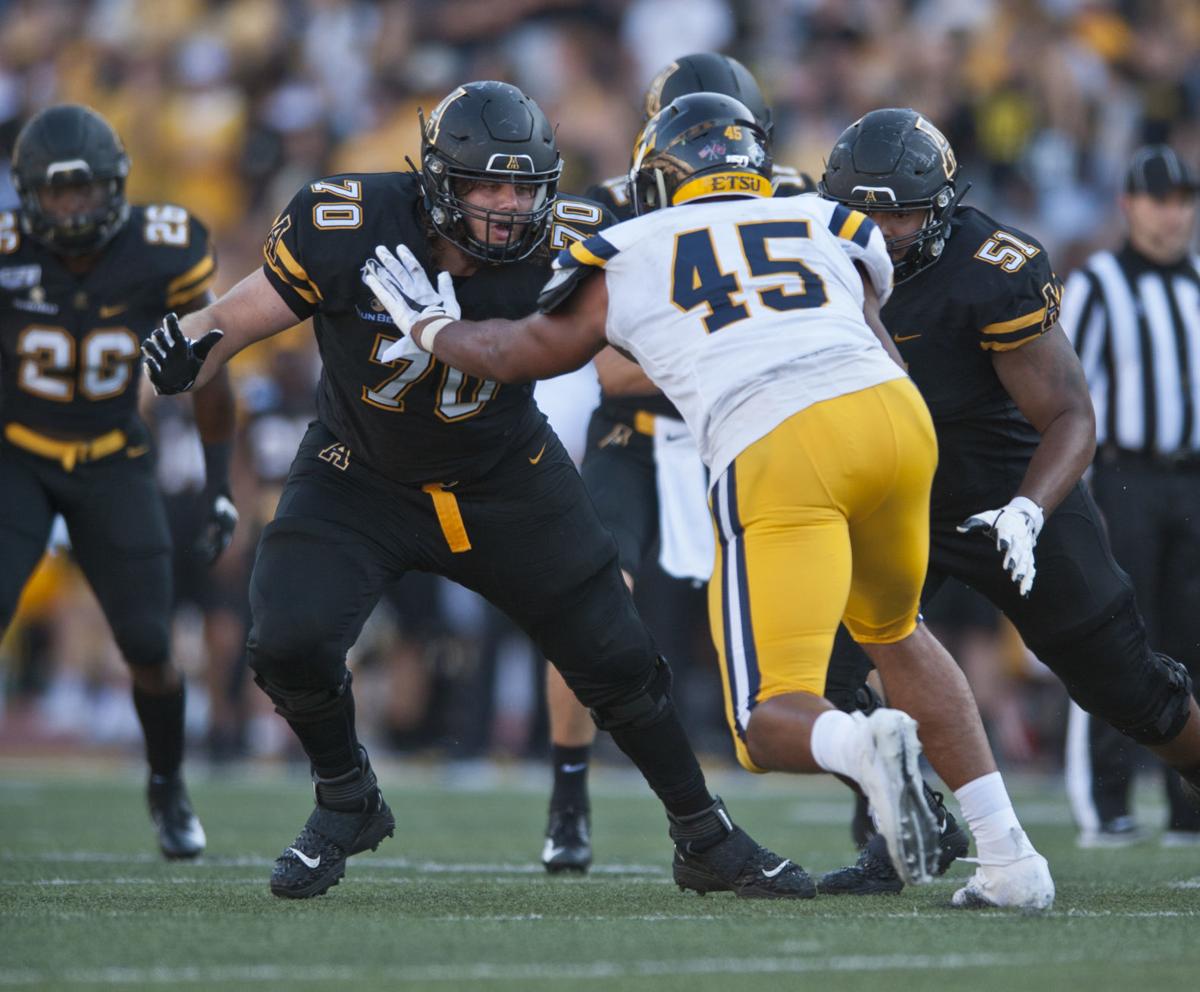 Freshman linebacker Nick Hampton of Appalachian State (31) celebrates with the crowd after the Mountaineers defeated UNC on Sept. 21 in Chapel Hill.

The route to playing time in college football isn’t a straight line. Just ask players such as Cooper Hodges and Nick Hampton — two guys who have seen their contributions increase with Appalachian State this season.

Hodges has risen to starting right tackle after being sidelined his entire freshman season in 2018 due to injury.

And Hampton has made regular appearances this season for the Mountaineers while spelling starting outside linebacker Noel Cook.

Both redshirt freshmen battled different obstacles during their first year in Boone.

“In the spring, I was like, ‘Man, I’m not sitting out this year. I’m going to be there and be ready when my number’s called,’” Hodges said. “So I just kind of took that mentality and played with it.”

First, consider Hampton’s rise. The 6-foot-3, 210-pound linebacker came from Westside High School in Anderson, S.C., and he was tasked with switching from a hand-on-the-ground defensive end to a stand-up pass rusher. He played in the Mountaineers’ first two games in 2018 — road games against Penn State and Charlotte — before being shelved until the Sun Belt Conference title game.

Fast forward to this year, and Hampton has appeared in all four of App State’s games, appearing in defensive and special teams’ packages.

Hampton said nothing could have prepared him for the amount of increased details required at this level. But he was fortunate, he said, to lean on older players such as Cook and Akeem Davis-Gaither for guidance.

“I still got a lot of work to do,” Hampton said when asked when he felt ready for college football. “I ain’t going to say I’m ready. Just got to keep staying focused and working.”

Hampton, who has seven tackles and two sacks, reaped the full benefit of the amended redshirt rule in its first season of action.

Starting in 2018, players could appear in as many as four games while still being able to receive a redshirt.

But that’s not the experience Hodges received.

Hodges originally appeared on the Mountaineers travel roster, but an injury sidelined him for the entire season.

Hodges worried how that might affect his improvement, setting him back when it came to the rest of his career.

“You don’t get many Noah Hannons that come in as a true freshman and start,” Hodges said of App State’s center who’s started since 2017. “It’s more of a developmental position. I just felt like that took a year of development from me, just being developed into a better player and stuff like that.”

That’s why he put a real emphasis on the spring. App State returned four starters from last season, leaving an opening at right tackle. Hodges expected to be a piece of depth for the line.

But in the spring, with starting left guard Ryan Neuzil out, Hodges worked there. Hodges thought he did OK, but he knew that spot wouldn’t last. Then in the fall with minor injuries at both tackles positions, Hodges worked at right tackle too.

Hodges played the position in high school, he said, and it was a natural return. But he didn’t know how that would affect the situation either.

Before the season, offensive line coach Shawn Clark talked with Hodges about the potential to become a starter. But Hodges assumed at the time he would be a guard. He didn’t see himself jumping over Neuzil or Baer Hunter, the team’s right guard.

But when the opportunity to start at right tackle came against Charlotte, Hodges knew he had to pounce.

“I took it like, “You’ve got to eat while the food’s hot,’” Hodges said. “This is my chance to play and I want to play. So I took the opportunity and just ran with it, taking every coaching tip I could and just trying to be the best player this team needs.”

Appalachian is 4-0, working on a long week as it preps for a Wednesday night game against Louisiana next week.

Both Hodges and Hampton will provide the impact they can as App State continues forward.

“I knew eventually — and it might be the first game of the season or it might be the bowl game or something — I was eventually going to have to play, and I was just trying to prepare myself to play the best that I could play,” Hodges said.